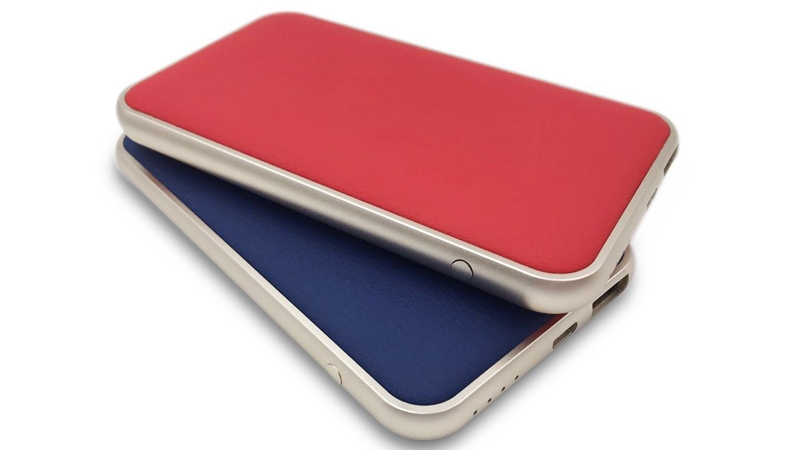 The CHJGD Midas is a premium-looking power bank that comes at a good price, yet doesn’t skimp on performance.

The first thing you notice about the CHJGD Midas  power bank is just how different it looks to most portable chargers. Usually black plastic affairs, the Midas has a red or blue leather-effect front and rear, with a gold plastic trim around the edge. The technical information usually plastered on one side is barely visible in white writing on the left edge, and a small CHJGD logo sits in a gold bar on the front. Also see: Best power banks 2018

The single USB output and Micro-USB input sit on the right edge, alongside four LEDs that are activated with a press of the small button on the side to show how much power remains. This power bank does not support auto-on, so you must also press this button to begin charging an attached phone. Also see: How to charge your phone’s battery faster

The attention of detail goes right to the bundled Micro-USB lead, which is a short gold nylon-braided cable that comes complete with a Lightning adaptor for iPhone users. And while the whole package might be more appealing still if it used metal rather than plastic, it looks very sophisticated nonetheless. It’s also slim and reasonably lightweight at 195g, given the capacity. See all power bank reviews

This looks very much like a premium power bank, and yet it costs just £19.99 when bought from Amazon UK. You can also pick it up direct from CHJGD, but at the slightly higher price of £24.99.

So where’s the catch? To be honest, there is no catch. So this power bank doesn’t support Quick Charge or USB-C, nor feature an LCD screen, but the vast majority of users won’t have a need for QC3 or USB-C just yet, and at this price you cannot really complain. Also see: How to improve smartphone battery life

We were pleasantly surprised to find still-fast inputs and outputs, albeit only one of each. The full-size USB output offers up to 10.5W for an attached device, while the Micro-USB input can accept 10W. Usefully, you can charge the power bank and a connected phone or tablet at the same time from a single mains outlet.

With 8,000mAh capacity and an industry-standard efficiency of between 65- and 70 percent, you can expect around 5500mAh of available power to charge your phone or tablet. That might fully charge most Android phones twice, or an iPhone three times. Also see: Best MiFi 2016