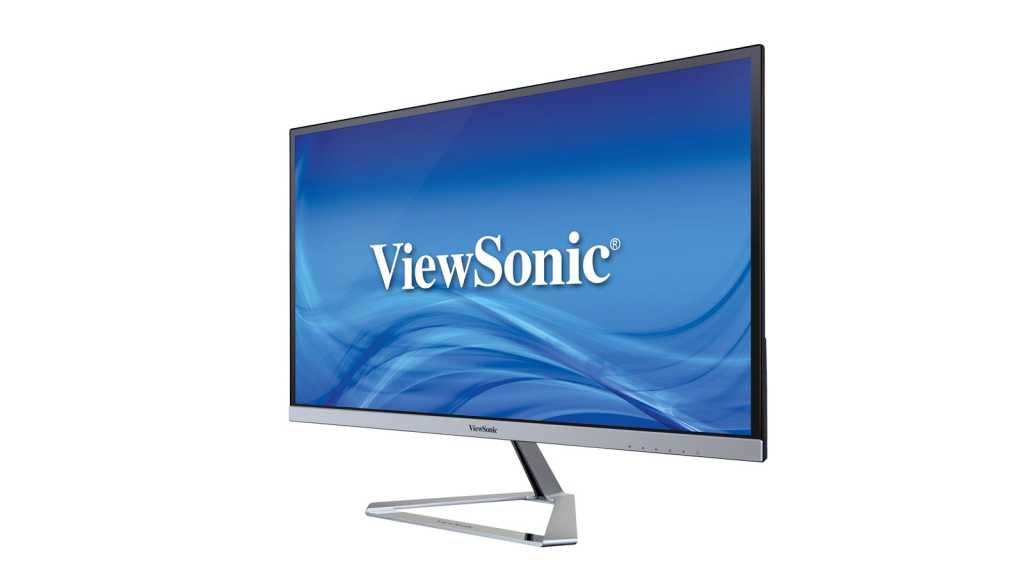 The ViewSonic VX2776-SMHD looks great and has good colour accuracy. In other respects – brightness, contrast and response time – things aren’t as rosy. If it were cheaper we could overlook them, but at this price, there are plenty of more affordable 27in displays.

No matter the size, there are many IPS LED monitors out there, but few with a borderless display that are only 6.6mm thick. The VX2776-SMHD is a 27in 1920×1080 LED IPS display with a matt finish, with a maximum refresh rate of 60Hz. Here’s our VX2776-SMHD review. See also: Best monitors to buy

The ViewSonic VX2776-SMHD may not be the cheapest 27in Full HD monitor around, but it’s certainly good looking.

The stand allows you to tilt forwards by 5 degrees and backwards by 17 degrees. Unfortunately, there’s no VESA mount and no height adjustment.

Alongside its silver bezel and brushed aluminium base stand, the monitor has a borderless design around the sides and top of the monitor. Like ‘borderless’ TVs, it really makes the image stand out and gives a more cinematic experience. It should be noted that there are black edges around the display, but millimetres of actual plastic bezel around the monitor.

Moving on to the On-Screen-Display (OSD) buttons, which can be found at the bottom right-hand side of the monitor; we found them to be a little hard to press, given that they are a bit pushed back and are very small. Furthermore, the buttons aren’t labelled properly, meaning if you want to quick access a setting, you’ll need to click on one of the button to reveal the quick access menu display.

Around the back of the monitor, on the left-hand side, you’ll find a Kensington Lock slot allowing you to secure the monitor and -hopefully – prevent it from being stolen. Also see: All display reviews.

At the back of the monitor, there are HDMI, DisplayPort and D-Sub (VGA) display inputs. There is also a headphone out and auxiliary input. Read next: How to connect a laptop to TV.

The monitor comes with two 3-Watt speakers, which are only useful for Windows sounds and shouldn’t be considered as adequate for music or gaming.

The ViewSonic VX2776-SMHD’s OSD is extensive, with a wide variety of options available to you. By pressing once on any of the OSD buttons, you’ll be presented with a quick access to the view modes, contrast/brightness, input selection and to enter the monitor’s menu.

Within the OSD, you can change the input, adjust or mute the audio (this includes changing the audio input), changing the view mode, adjusting the colour, contrast, brightness among other display settings, and through the ‘setup menu’ tab, you can customise various settings such as disabling the power indicator.

Through the ‘ViewMode’ tab, you can enable Low Input Lag mode, which helps bring down input lag. There are also options to customise its ‘Black Stabilization’ (used for customising the black levels), ‘Advanced DCR’ for more dynamic colours, ‘Blue Light Filter’ used to reduce eye strain, ‘Response Time’ which helps reduce the monitor’s response time – we’ll explain its impact below.

The monitor comes with flicker free technology, which is a feature that some people will appreciate. If your eyes are sensitive to PWM-LED flicker, then this monitor should help reduce eye strain.

We conducted objective tests through the Spyder5Elite, which resulted in the monitor displaying a maximum brightness of 211.6 cd/m2, which is a little dim versus other monitors we’ve come across. Nevertheless, the monitor’s maximum brightness will still suffice for bright room conditions. We also found its 800:1 contrast ratio a little low for an IPS panel.

The VX2776-SMHD achieved 99 percent of sRGB’s colour space, and 77 percent of Adobe RGB. In comparison to the Philips 246E7QDSW which has a PLS panel (very similar to IPS technology), the Philips was able to score an impressive 85 percent – a number which will appeal more to those who want a better colour gamut range.

Colour accuracy is very impressive though, with a Delta E of 1.14 (lower is better). We found its colours to be accurate, but slightly lacking in saturation. However, through the OSD you can fine-tune the colour temperature and image quality settings to make the colours pop a tad bit more.

Obviously this monitor isn’t aimed at gamers, but given its low quoted response time we felt it was important to mention and test versus other gaming monitors we’ve reviewed.

We fired up CS:GO and found that the monitor was a little slow in its response time. Using the available controls we were able to reduce response time, but this added a lot of ghosting, making any game hard to enjoy. Therefore, we found the monitor to not quite suit the needs of a gamer, especially not for one who plays competitively.