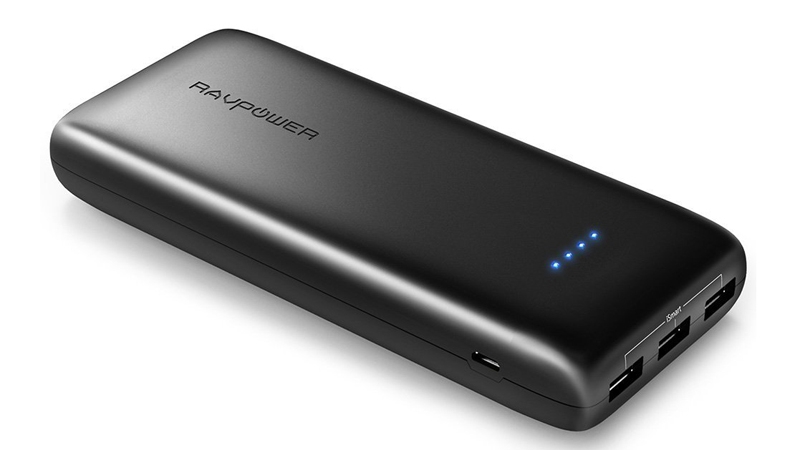 Affordable, high in capacity and able to keep three kids entertained at once, the RavPower Ace 22,000mAh is possibly one of the best family power banks. A great buy if you’re planning a long journey away from mains power.

If you’re going on a long journey and have kids, a phone or tablet can be the first port of call to keeping them entertained – for as long as the battery lasts in any case. The RAVPower Ace 22,000mAh External Battery Pack can be a lifesaver in times such as this, since it’s both affordable (£26.99 from Amazon UK/$39.99 from Amazon.com) and one of few  power banks to offer three USB outputs. Also see: Best power banks

These are fast-charging outputs, too – not in Quick Charge 3.0-league, but significantly faster than a conventional phone charger rated at 12W each. That said, the RAVPower has a max total output of only 29W, so cannot maintain the full-speed for each port when all three are in use. It gets around this with iSmart tech, which automatically adjusts current and voltage to minimise charging time and maximise performance. Also see: How to charge your phone’s battery faster

The Micro-USB input is also rated at 12W, and should allow you to refill the RAVPower in 10- to 11 hours. Better still, it supports passthrough charging, which means you can simultaneously refill the power bank and attached devices and use only one mains power outlet to do so. See all power bank reviews

Given that there are three USB outputs, it seems an odd decision for RAVPower to bundle two flat Micro-USB cables – one more than is supplied with most power banks, but one fewer than is required to maximise potential. Still, we expect most families have multiple Micro-USB cables lying around, so sourcing a third shouldn’t prove too difficult. Plus RAVPower supplies a handy mesh carry case to keep it all together, and protect the power bank during your travels. Also see: Best MiFi

Not that it particularly needs protecting. What appears to be standard ABS plastic is actually the same fire-resistant thermoplastic alloy used by car makers such as BMW and Mercedes-Benz. It’s smooth to the touch with rounded-off corners, and the RAVPower feels incredibly tough. It also feels incredibly heavy (406g), so this is one power bank you’ll want to carry in a bag rather than a pocket. Also see: How to improve smartphone battery life

As is the standard with power banks four LEDs are used to show how much power remains in the bank. With each LED representing 5,500mAh pinpointing an exact capacity will be impossible, but it will take you a fair amount of time to run down the battery in any case. With 22,000mAh available you can expect around 15,000mAh of usable power. As RAVPower points out, that will charge an iPhone 6s nine times, or a Galaxy S7 five times.

To view the remaining capacity you simply press the power button on the side, but you do not need to do this to begin charging – pleasingly the RAVPower supports auto-on.