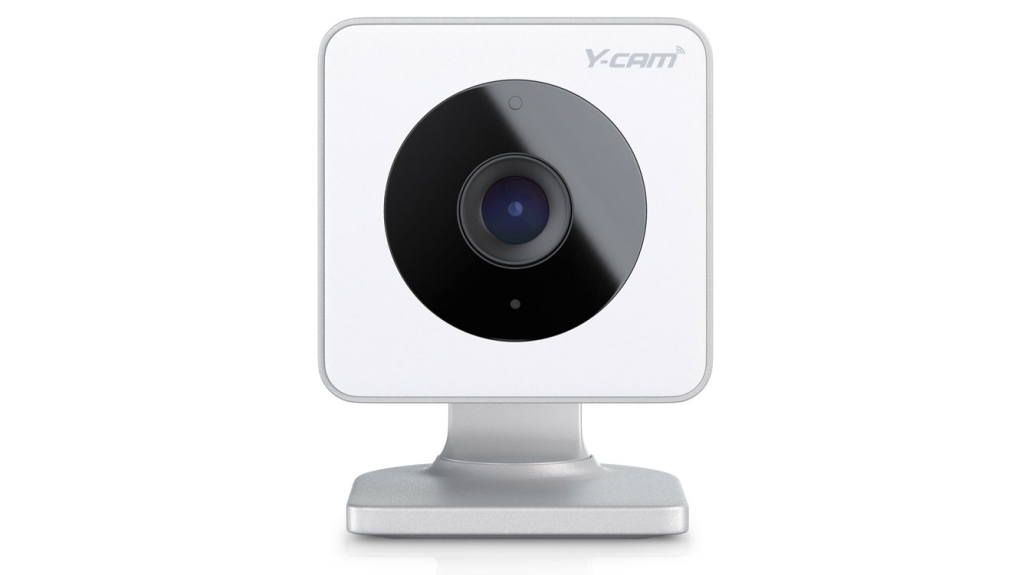 The Evo is a good all-round indoor home security camera you can buy thanks to a combination of hardware, software and the free seven-day cloud recording. Just note this now lasts for 12 months.

The Evo is a new indoor security camera that’s part of Y-Cam’s HomeMonitor range. It’s tiny and has a few handy new features that make it one of the best home security cameras around.

Important update: Y-Cam has just changed its policy on free cloud storage. Previously it offered seven-day rolling storage for free, which made it the most generous of any smart security camera. Now, it says it cannot afford to do this for longer than one year. After that the storage costs £2.99 per month per camera, or £4.99 per month if you opt for the Plus Premium service (this is a 50 percent discount off the usual price and the deal lasts for one year).

What does this change mean? It means that after the first year of ownership you will have to pay the subscription fee, just as you do with Nest cameras. Without a subscription the camera will work, but only for motion alerts and live monitoring. There is no way to record to local storage such as an SD card or NAS drive. The subscription cost is still lower than Nest’s but Nest’s cameras (and app) are arguably better than Y-Cam’s.

Also, note that Y-Cam cameras don’t record continuously like the Nest Cam: it only records and saves clips when motion is detected.

You can buy the Evo directly from Y-Cam for £129.99. This is the same price as the old Indoor HDS.

The price includes seven days of rolling cloud storage for ONE YEAR.

The first thing to note about the Evo is that it’s tiny. It’s the smallest home security camera I’ve reviewed, and one that can be mounted almost anywhere without being obtrusive. Note that it isn’t waterproof: if you need an outdoor camera, check out the Y-Cam HD Pro.

The stand is clever, too. In the box is a small bracket that’s designed to be screwed to a wall. As it’s magnetic, you can easily pull the camera (with its stand) off this bracket and relocate it somewhere else temporarily.

And as it uses a standard tripod thread, you can use other mounts (but probably not a tripod).

There are two other significant upgrades compared to the Indoor HDS: Bluetooth and a speaker.

Bluetooth means you can set up the Evo from your phone. No longer do you have to first connect the camera to your router using a network cable as with previous Y-Cam models. The new app has a slick interface which makes phone-based setup a breeze: I had the Evo up and running within three minutes of unboxing it.

For those without an existing Y-Cam account, you’ll need to allocate a few extra minutes to create a free account.

The second update – the speaker – will enable 2-way audio, although this isn’t yet implemented in the app. An update is coming soon that will let you talk back, and this will bring the Evo more in line with the current competition, much of which already offers 2-way audio. With the older Y-Cam models, you could only listen in to what was happening.

As you’d expect, infrared LEDs are used for night vision, so the Evo can capture the action even when the lights are off.

A feature introduced a little while ago is location recording. This uses your phone’s location to disable recording when you return home and enable it when you leave. It’s a good idea, apart from the fact that it doesn’t take other family members into account so it works on the location of only one phone.

When I first heard that the Evo – the first new camera in Y-Cam’s range for a couple of years – wasn’t going to have a 1080p sensor, I couldn’t hide my disappointment. However, it’s worth bearing in mind that many 1080p cameras which record to the cloud don’t benefit from the extra resolution as the video is stored and streamed at 720p (or lower).

Still, the ultimate security camera – as far as I’m concerned – would offer a way to record top-quality video locally and only scale down to steam it over your broadband connection.

If one exists, I’m willing to bet it doesn’t work as well as the HomeMonitor system. Y-Cam recently released a new app with an updated interface and it’s one of the best you’ll find.

The ‘home’ screen shows a thumbnail preview from your camera(s) and you can tap the power button underneath to quickly disable or enable a particular camera. The thumbnails update to show what’s happening live after a couple of seconds of opening the app. Tapping on the ‘play’ button brings up the live view along with a list of recently recorded video clips.

A further tap on any recorded clip starts that playing and the new app lets you download it straight to your iPhone or Android device, a feature that’s particularly handy and one you don’t get with many of the Evo’s rivals.

Unlike in the old app, you can now change most of the camera’s settings without having to use a PC or laptop and use the web portal. In particular you can set and adjust up to two zones to monitor for motion, and tweak the sensitivity using your phone’s touch screen. 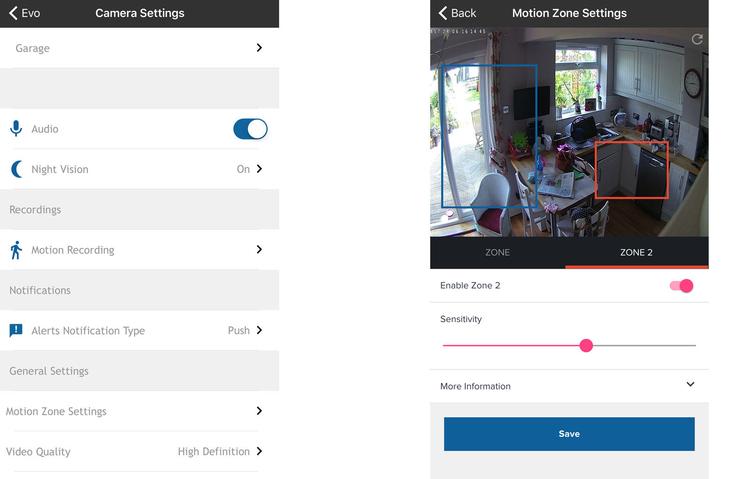 It would still be nicer to have more flexibility when defining the areas to monitor: SpotCam and Nest both offer different approaches. With the Evo, you’re often forced to select a bigger area than you really want to because you’re limited to horizontal and vertical lines.

However, it’s a minor gripe as the motion detection works reliably. Over the course of the last two years that I’ve been using the HomeMonitor system it has only missed a couple of events, so the absence of continuous recording isn’t particularly noticeable.

Cleverly, Y-Cam uses a memory buffer in the camera so it can record the few seconds before motion is detected in order for you to see the whole event. My only complaint is that clips often cut off after 30 seconds or so. Typically that’s long enough to see what you need to, but occasionally it would have been nice if it had continued recording.

In the app there’s a record button that lets you manually record what’s happening for up to five minutes.

Y-Cam says video quality is better than the Indoor HDS and Outdoor HD Pro, and it is. There’s a bit more detail and – perhaps through better image processing – everything is sharper. A bigger impact is the wider field of view from the new lens – now 100 degrees rather than 87 on the Indoor HDS.

The only option missing from the app is the recording schedule. Via the web portal you can choose when the Evo is on and off, but since you can easily turn it on and off through the app, it’s hardly a problem.

In terms of alerts, you have the option of a notification on your phone, an email or both. You can select all these options via the app. Currently there’s no IFTTT integration so the Evo is very much a standalone product that works in its own ecosystem. For most people, that’s absolutely fine, while for geeks who want more advanced options, it’s a slight limitation.