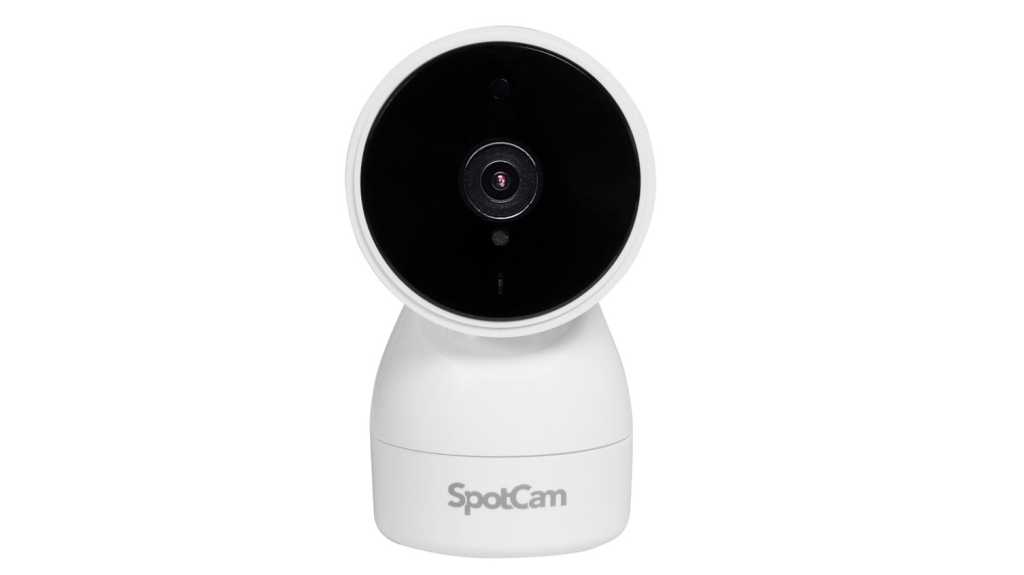 The SpotCam Eva is a decent camera at a reasonable price considering you get free, continuous 24 hour cloud recording. However, it’s let down by poor software which makes it frustrating to control the pan and tilt. More annoyingly, it’s painful to navigate through the recorded video via the app, which is buggy and unreliable.

SpotCam is a relatively new name in home security cameras and is headquartered in Taiwan, with a UK office. There are three cameras in the range: HD (indoor), HD Pro (outdoor) and the new Eva, which is what I’ll be focusing on here. See also: Best home security cameras you can buy right now.

The Eva is unique among modern consumer-oriented IP cameras in that it can physically rotate and tilt. Other cameras claim PTZ (pan, tilt, zoom) but most use a fish-eye lens and then do the ‘panning’ in software. This is the real deal, although note that there is no optical zoom: this is done in software.

There’s one other attraction: free, continuous cloud recording on a rolling 24-hour basis. No other camera offers this.

That’s a competitive price considering the panning, tilting and free cloud storage. Y-Cam offers seven days’ free storage for recordings, but this is only for clips recorded when motion is detected. SpotCam gives you free storage for 24 hours, but recording is continuous. That means you can jump back to any point in time in the last day and watch what happened, so it’s like CCTV.

If you need an outdoor camera that’s weatherproof, the SpotCam HD Pro is cheaper at £149 from Amazon but is only available in black.

Setup isn’t difficult, and it’s possible to do it using an Android phone or iPhone but the Wi-Fi selection process is clunky. Instead of picking from a list of networks and entering the password, you have to connect to the SpotCam’s own Wi-Fi first, then switch to your device’s settings and connect to the Wi-Fi network you want the Eva to use, switch back to the Spotcam app and then enter the password. Then you have to use the physical switch on the back of the camera to select ‘Client’ position rather than ‘Access Point’.

It would be far better to use a Bluetooth connection like the new Y-Cam Evo or Nest Cam.

The Eva is quite large, so it’s hard to place it stealthily in a room. It comes with a plastic bracket which can be screwed to a horizontal surface. The camera clips into this to keep it in place and it’s a good idea to use it to prevent the Eva falling off a shelf if it bumps into something while it’s panning or tilting.

The bracket can also be attached to a ceiling, and this is the most sensible way to mount the Eva: the power cable is long enough to reach a mains socket at floor level.

It’s a 720p camera, but this is enough to make out faces and details. I’d prefer 1080p, but as most cloud-based cameras stick with the lower HD resolution in order to avoid taking up too much of your broadband’s upload bandwidth, and to improve performance.

It’s a shame there’s no option to record less compressed footage locally; cloud recording is order of the day.

In the app, which I’ll talk about in more detail below, you can pan and tilt by swiping on the live view in exactly the same way you’d navigate around a map. There’s a delay between swiping and the camera moving, and it’s an imprecise mechanism. The length of your swipe is supposed to determine how much the camera moves, but in my experience, the Eva has a mind of its own. Worse still, if it hits the end of its travel, it returns to the centre. What’s needed is a couple of sliders which would give you more precise control.

Through a clunky interface you can set four positions. Tapping each makes the Eva move to that view and it can continuously move between those positions if you want it to. There are three speed settings, from slow to fast.

I’ve been testing the SpotCam system for over six months now and while there have been a few updates and bug fixes (there was previously no timestamp embedded on the stored video), there are still glitches and problems. I’ve mainly used the iOS app, which lacks polish compared to rivals.

In general, it’s reasonably intuitive once you’re used to the different tabs on offer. There’s the expected live stream, an events tab so you can see when motion or loud sounds were detected.

The third tab isn’t actually a tab: you tap the microphone icon to enable talkback mode. Your crackly voice will be heard over the Eva’s speaker. It’s hard to know when this would be useful: potentially only in the event of a break-in when you could shout at a burglar.

What’s good is that virtually all the settings available on SpotCam’s web portal are in the app, too, so you can set a recording schedule, change alerts, disable the status light and rotate the video image by 180 degrees.

You can even specify the areas you want to watch for motion. For this, SpotCam uses a grid: you tap squares to mask out bits to ignore. This is far better than Y-Cam’s approach of two adjustable rectangles.

This masking applies only to the fixed-position HD and HD Pro, though. As the Eva has pan and tilt, it merely detects motion anywhere in the frame. You can adjust the sensitivity, of course.

One option not available in the app is the ability to choose whether you want an email alert each time motion is detected. That’s only in the web portal:

Live video is delayed by a few seconds as with all internet-based security cameras. I found that motion alerts took anything from 10-30 seconds to arrive on the app, and it takes a similar amount of time to view the live feed, depending on whether the SpotCam app is running and already viewing that particular camera or not.

As I’ve said, video quality is decent enough considering the amount of compression used to stream it to SpotCam’s servers and back to your device. It’s certainly on a par with Y-Cam. I’d like it to be better, but the Eva uses between 0.2Mb/s and 0.5Mb/s of your uplink constantly and many UK households are severely limited when it comes to upload speeds. Because it records continuously, that’s between 2GB and 5GB of video uploaded every 24 hours – much like the Nest Cam. Install more cameras and you could quickly max out your upload bandwidth and, if your broadband provider’s data cap includes uploads, it could quickly use up your monthly allowance, too.

The bad news is that watching recorded video can be a painful, hit-and-miss process. It’s pretty much the opposite of the slick CCTV replays you see in movies. Although there’s a slider bar for quickly jumping back in time, it’s not at all precise. It can take several seconds to begin playback, but sometimes it won’t play at all, and merely continues to show the live stream.

You can zoom in and out by pinching on a touchscreen during playback, but there are no useful playback controls. You still have to navigate the recordings by sliding the timeline and, annoyingly, the ‘rewind 30 seconds’ button only applies to the live view and tapping it while reviewing historic footage takes you to 30 seconds prior to live.

There’s a search function which brings up an ugly date and time selector, but although you can specify time down to the second, it often jumps to a section of the recording a minute or two before or ahead of the time you’ve asked for. There’s no limit on this search, so you could select a date and time three weeks ago. Really, it should only let you search for a time and date for which recordings actually exist. The screenshot below shows one of the glitches still present in the iOS app: sometimes the time selection appears over the video preview when you rotate your phone.

You can’t download video clips via the app: you can only take a photo and save it to your camera roll. To ‘make a film’ you have to use the dedicated tool in the web portal to select a period of time. When the video is ready you can download it (in nasty FLV format), but there’s cloud storage for up to nine hours’ worth of saved clips. Video is in true 1280×720 resolution, but at low bitrate and 15 frames per second.