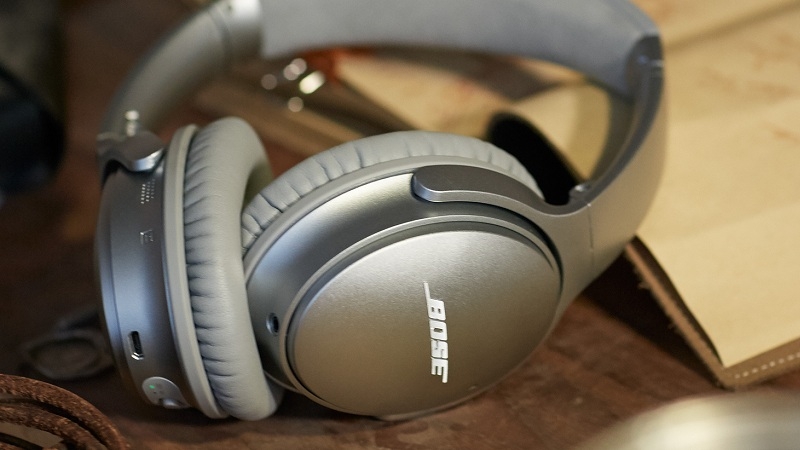 They’ve been a long time coming but Bose has finally made a pair of wireless noise-cancelling headphones and they were worth the wait. They’re only £30 more than the QC25 which makes them a no brainer even if you use them chorded a lot of the time. They’re comfortable, the noise-cancelling is outstanding and the sound quality is high-quality too. An all-round excellent pair of immersive headphones. We’d just like a better app and control over the noise-cancelling.

You asked and Bose has listened, it’s popular QC25 noise-cancelling headphones have gone wireless for 2016 – so not only do you get rid of all the distractions around, you also get shot of the wires. Here’s our full and in-depth Bose QuietComfort 35 review. See also:  Best headphones.

For fans or people with knowledge of Bose’s headphones, these are the ones everyone has been waiting for. It’s not that the firm has never made wireless headphones before – you can get SoundLink wireless can in on- and over-ear versions – but Bose hasn’t included noise-cancelling before.

Head to the Bose website and the QC35s are being touted as ‘our best headphones yet’. The firm added “You wanted wireless QuietComfort headphones. So we re-engineered them with Bluetooth technology and our world-class noise-cancellation that makes music sound better. So you can just listen, with nothing in the way.”

Priced at £289, the Bose QuietComfort 35 aren’t a crazy amount more expensive than their in-ear (wired) counterparts which arrived in 2013. The Bose QC20 headphones launched at, and still are, £229.

It’s understandable that the QC35s also cost more than the QC25 headphones since they are essentially the same but with wireless technology included. The difference is just £30 and well worth the extra if you’re trying to decide between the two.

If you’re thinking these are quite expensive then consider that the Sennheiser Momentun 2.0 and B&O Play H8 (both wireless with noise-cancelling) are priced at £379 and £399 respectively.

In terms of cheaper rivals, you can save some money if £289 sounds out of your budget. For example, we recently reviewed the impressive Sony h.ear On Wireless NC headphones which provide the same combination of wireless and noise-cancelling for £220.

Compared to the QC25, the new QC35 headphones are heavier at 310g (against 196g) and while that might sound like a lot to add wireless technology, remember it’s not just a tiny Bluetooth chip. Bose has had to put a rechargeable battery inside to power the headphones. The Sony headphones we mentioned above are 290g so these are very similar.

The weight is by no means a negative point, the QC35 do not feel heavy when you pick them up or when you wear them. One other change which impacts the weight is a slightly wider headband which brings us onto comfort.

Part of keeping the weight to a minimum is using lightweight materials. Bose uses a ‘glass-filled nylon’ although you wouldn’t know it as the QC35s look and feel very much like plastic. Not that they don’t feel well-made and durable, but perhaps not quite a premium feeling as the price tag suggests. 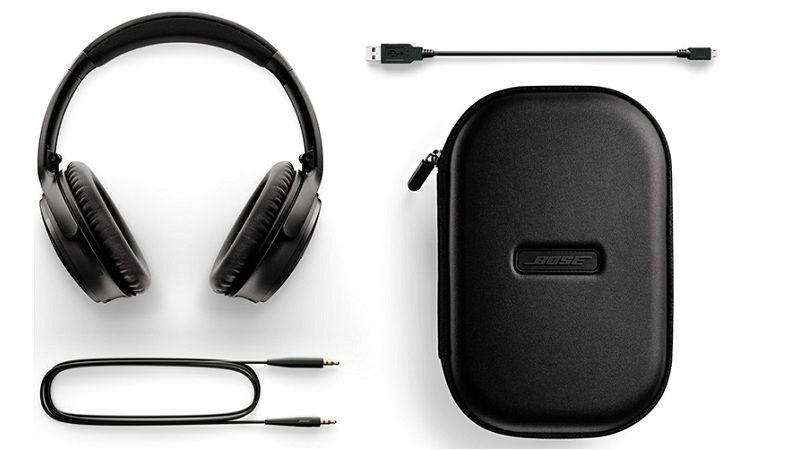 The word comfort is is the model name and the QC35s certainly live up to it. The wider headband makes for a sturdy fit and the cups are pressed around your ears with a good level or pressure. These are over-ear headphones and the foam is incredibly soft and luxurious feeling.

Bose says the cushions are manufactured from a synthetic protein leather and contain a silicone bead for passive noise reduction. We only worry about how discoloured and grubby they will get over time and the same is true of the underside of the headband which is Alcantara (a material used in yachts and expensive cars). On this subject it might be worth opting for the black model over the silver – which we think looks better anyway.

Like most headphones, the QC35s fold and twist so you can transport them more easily and a decent hard carry case is supplied.

The main features of the of the QC35s are the wireless connectivity and the noise-cancelling but it’s not limited to those. As well as the addition of Bluetooth, an NFC chip means you can pair with enabled devices very easily (no settings menu required) – not iPhones which are limited to Apple Pay, though.

All the controls on the headphones are located on the right ear cup and to start a sliding switch with turn them on and get you into Bluetooth pairing mode. Somewhat annoying is a female robotic voice telling you the battery level and connected (or not) devices. You can turn these off with the Bose Connect app if you find them grating. The app also helps you manage your devices, power settings etc. 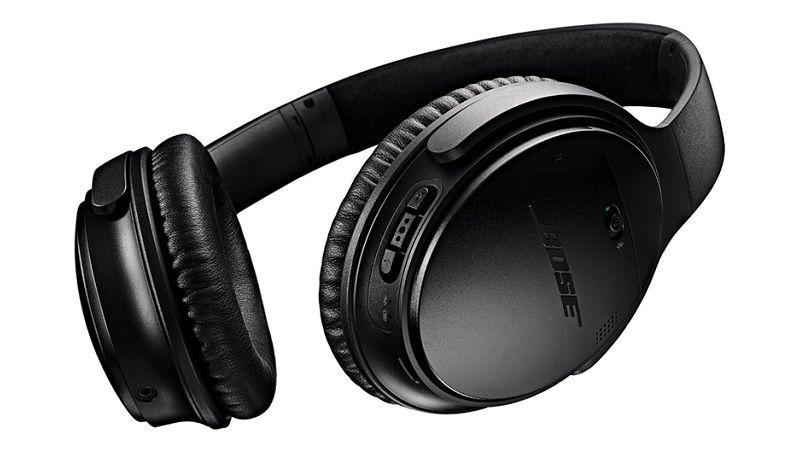 You’ll also find LED notification lights and three buttons – you can adjust the volume while the middle button can be used for pause/play and answering calls (you can make hands-free calls when connected to a phone).

You can connect the QC35 headphones to two device simultaneously and switch between them seamlessly – just pause on one and play on the other. We had no trouble connecting the headphones to a MacBook Air, iPad Pro, iPhone 6S and Samsung Galaxy S7. We found wireless performance to be excellent but you can use the headphones wired should you need to – not all devices have Bluetooth after all or you might be on a plane and not be allowed to use them wirelessly.

Although you can use the QC35s wired, you’ll still need battery power to make use of the noise-cancelling and digital active EQ. When fully charged (via Micro-USB) you’ll get up to 20 hours battery life fromt the headphones wirelessly which doubles when using them wired.

Unlike some headphones, there’s no choice as to whether the noise-cancelling is on or off – it just works as long as there’s battery power. That’s sort of a shame as you might want to save the juice for time periods where the feature makes a bigger difference. There’s also no ‘aware mode’ which is a feature of the QC20s we liked – it allows you to let in some of the sound around you so you don’t miss something dangerous or an important announcement, for example. The QC30 wireless in-ear headphone which will launch in September will feature controllable noise cancellation.

The QC35s have microphones outside and inside the ear cups to listen to the unwanted sounds which are going on. An opposite signal is delivered via two proprietary digital electronic chips to cancel out the noise. It works extremely well and gives you a real sense of calm and isolation without even playing anything through the headphones – and without exerting pressure on your eardrums which can be a side effect, although it will vary between users. 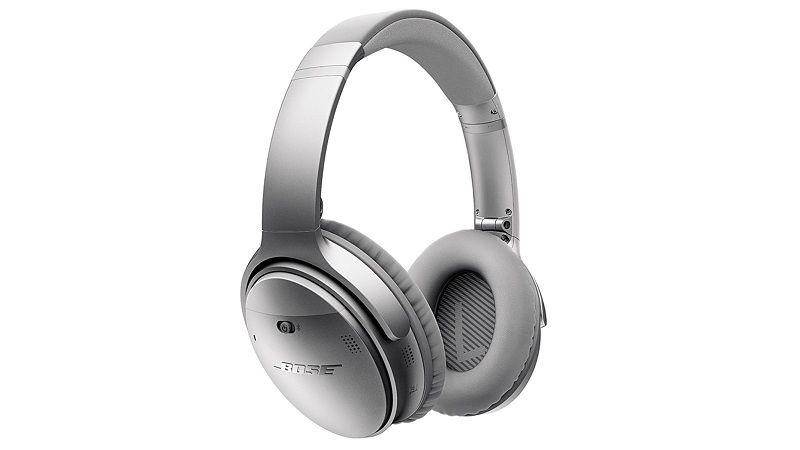 We found the noise cancelling effective in a busy office environment and the headphones coped well on a packed commuter train, too (we haven’t had a chance to test them on a flight). The QC35s don’t pop and crackle when air pressure changed such as entering a tunnel but there is some understandable disturbance when a train going the other way passes.

They also do a good job when it’s windy but one thing we did notice is that you get sizeable thumps when walking along the pavement – something incredibly hard to cancel out but the effect seems exaggerated with the headphones. You’ll need to try walking in time to some pumping dance music in an attempt to disguise it.

Noise-cancelling aside, the Bose QC35 headphones sound excellent in terms of sound quality, although you do get a slightly better (and more consistent) sound when using them wired. It’s strange that the Connect app doesn’t have a user EQ but the built-in one does a pretty good job across genres.

What you get here is what many regard as a classic Bose sound quality – rich, balanced and crisp. Combined with the noise-cancelling and the result is a very atmospheric and intimate experience where you feel more part of the music.

The drivers provide tight and refined bass which is also powerful and impressive sub-bass depending on what you’re listening to (try some James Blake to test them out). Bass-heads will probably want more and the Sony h.ear On headphones might suit better.

The mid-range is tuned nicely to bring out the best in vocals and key instruments. Whether it’s the drivers or the EQ, or simply a combination, the balance is excellent and the top-end is satisfying bright and sparkly.