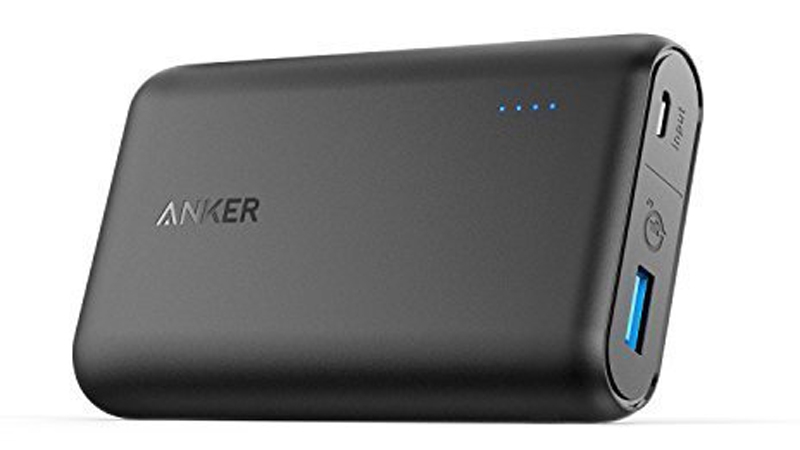 Fast, portable, high in capacity and affordable. There are some boxes the Anker PowerCore Speed 10000 QC power bank does not tick, yet you’d be pushed to find fault with it at £25. A recommended gadget for the upcoming festival- and holiday season.

It’s that time of year when a power bank should top everyone’s gadget wishlist. Whether you’ll be spending several hours attempting to keep yourself or the kids entertained as you jet off somewhere hot, or getting washed away at a festival hoping to glean some comfort from trusty smartphone, a power bank is essential for keeping your devices going away from the mains. Also see: Best power banks 2018

We review all sorts of power banks, and while you might imagine there’s not a lot of difference between them you’d be surprised. It’s not just their capacity or how many times you can charge your phone that is important: you should also consider such things as how many devices you can charge at once, how quickly they can refill their batteries or how quickly they can refill your phone, whether they are big and bulky or light and pocketable, and so on (we cover all these things in our power banks buying advice).

So many of the power banks we see are basic, no-frills devices from companies you’ve never heard of, but they’re sold cheap on Amazon and they’re functional, which makes them appealing. See all power bank reviews

This Anker PowerCore Speed 10000 QC tells a completely different story. For a start, Anker is one of the better-known brands in charging tech, which gives that feeling of reassurance you require when buying a gadget online (plus it comes with an 18-month warranty).

But that name won’t mean digging deeper into your pocket – right now you can grab this Anker PowerCore Speed 10000 QC from Amazon UK for just £25.99, and that’s very good value. (For US customers it’s available for $35.99 at Amazon.com.)

This is a recently upgraded version of the PowerCore 10000 – previously PowerCore 10000, now PowerCore Speed 10000 QC, which is indicated by the blue-plastic-pronged full-size USB port. The main difference is its inclusion of Voltage Boost technology, alongside Quick Charge 3.0 and PowerIQ. When combined the three technologies ensure that a connected device is charged in the shortest time possible.

This new version also comes with a mesh carry case, which its predecessor did not.

The PowerCore is also one of the few power banks we’ve reviewed to catch our attention as soon as it arrived on our desk (the Zendure A2 is another of our favourites). As a 10,000mAh power bank, we expected it to be significantly larger – Anker says it’s 27 percent smaller than comparable battery packs. Just 100x63x22mm the PowerCore is smaller even than Xiaomi’s impressive 10,000mAh bank. It’s sufficiently light, too, at 198g.

The design is arguably basic, but a power bank is a functional- rather than showy device. With its matt black rectangular design, tough plastic casing and smooth rounded corners, this battery will fit comfortably in the hand or in a pocket, then keep out the way and quietly get on with its job. You’ll find four LEDs on top of the device to show how much juice remains (press the button on the side to activate this), and a single Micro-USB input and single USB output on one end. Also see: Best MiFi 2017.

Refilling the power bank is fast, too, at 2A (10W), but unfortunately there’s no support for passthrough charging, which Anker has disabled because it can have a detrimental effect on the internal battery cells of the power bank. This means you won’t be able to simultaneously charge your phone and the power bank from a single mains outlet, which will be less of a concern when you’re at home but more of an issue if you’re staying in a hotel room with limited wall sockets (or limited travel adaptors).

You should expect between 60- and 70 percent efficiency from the Anker PowerCore 10000, which means there is 6,000- to 7,000mAh of usable power for charging your devices. Anker says the PowerCore offers up to four full charges, and that is certainly true if you own an iPhone or a low-end Android. If you have a device with Quick Charge 3.0 support it’s far more likely to be a flagship Android, however, with somewhere around 3,000mAh battery capacity. If this is the case you should expect only two full charges from the PowerCore – although still two very useful charges when you’re away from home. Also see: How to improve smartphone battery life.

The Anker PowerCore Speed 10000 QC supports auto-on, which means you simply plug in your phone or tablet and it will begin to charge. It’s incredibly fast and portable, and right now very attractively priced. Other features – such as waterproofing, an LCD screen, passthrough charging and even basics such as a flashlight – are missing, but don’t let that put you off what is a great gadget for the upcoming festival- and holiday season.