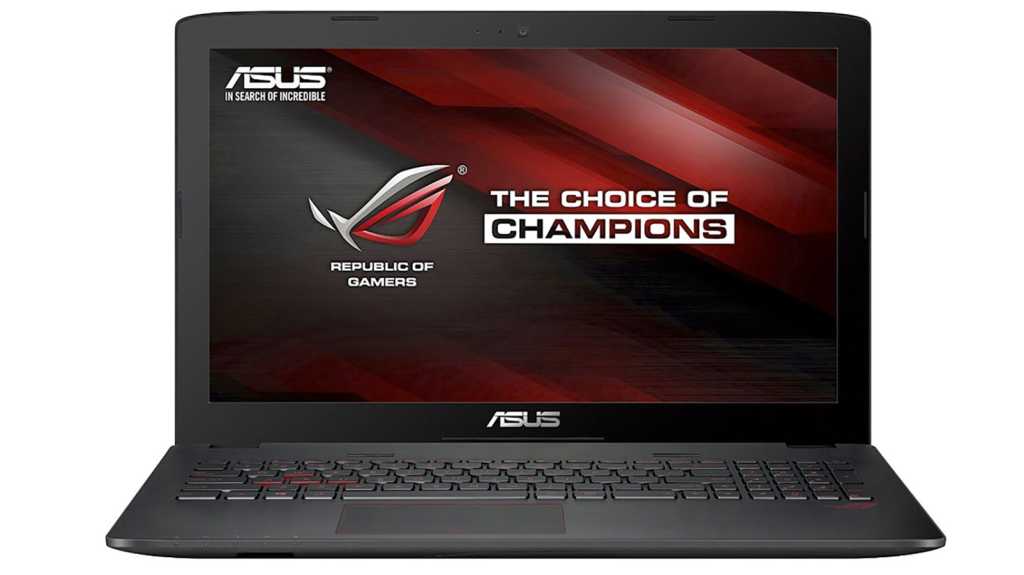 The Asus RoG GL552 is a more affordable, lower-spec take on the RoG G752, which is one of the best gaming laptops money can buy right now. Any resemblance is mostly visual, though. Superficial parts of the build are worse, the screen is nowhere near as good and the trackpad is typical slightly annoying Windows laptop fodder. It’s definitely not the perfect laptop. However, in terms of providing a solid gaming experience for your cash, it’s a decent buy. The GTX 960M GPU hits the sweet spot, where it cam handle demanding games at reasonable settings without costing as much as a second-hand car. One you’d actually want to drive, anyway. Screen quality is a sticking point at this price. Apparently £900 isn’t enough to have an IPS screen, even though previous GL552 models (and current ones in other countries) use such a panel. So if you see a different version of the GL552 with an IPS screen, it’s likely to be a better buy than this exact one.

The Asus RoG GL552 is a mid-range gaming laptop. It costs £899. That’s right, £900 only gets you a mid-range machine in gaming laptop land. However, it gets you solid performance with recent games without making graphics sacrifices so major they make it seem you’re playing a PS2. There are several compromises to note elsewhere, though.

The exact model of GL552 we’re reviewing is the GL552VW. It costs £899, but you can now find it discounted from retailers including ebuyer, where you can buy the GL552VW for £799.

This isn’t a brand new series so make sure you’re not accidentally looking at an old model. Last year’s version is called the GL552JX. Don’t necessarily rule that out if you find a good deal, though. It has a better display than this one, using an IPS panel. Plus, the -VW model is also available with an IPS screen in countries other than the UK.

The Asus RoG GL552 looks, feels like, and is, a younger brother to the top-end (and chart-topping) Asus G752, reviewed. This  laptop is smaller and cheaper, but still has some of the same RoG-series style.

It results in a brushed metal-style panel of plastic on the lid, used on many an Asus gaming laptops. On the inside there’s a high-tech pattern painted around the keyboard. The keyboard backlight is also red: 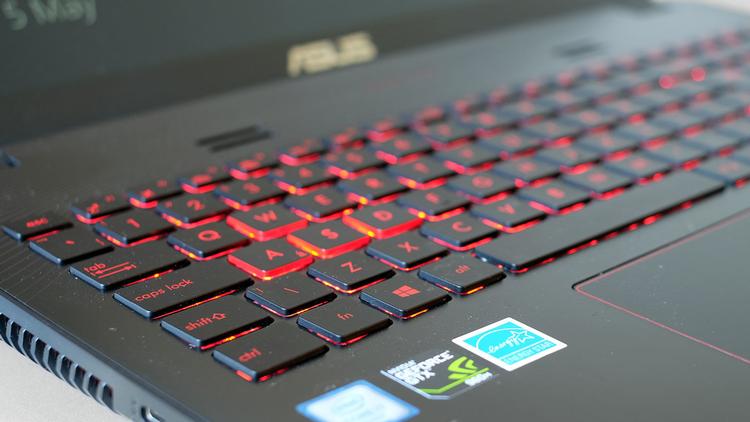 It’s all surface-level posturing, of course, but then there’s nothing wrong with wanting your gaming laptop to have some flair. It weighs 2.5kg, so is far too heavy to take around with you in a rucksack every day, but easy enough to carry around the house.

Asus’s G752 feels a bit more sturdy, a bit more expensive (which it is), but it’s only something you’d notice if you’d used both. Previous RoG laptops we’ve reviewed have been very solid machines that feel expensive even though they’re made of plastic.

The plastic feels cheaper here, particularly around the slightly flex-prone lid. The inside, where build matters most in a home-bound laptop, feels very solid, though. There’s virtually no flex, and the feel is more expensive than the exterior.

In line with most of 2016’s new laptops, the Asus RoG GL552 has a USB-C port as well as the sorts of connections you’d have seen last year. That includes three full-size USBs (2x USB 3.0, 1x USB 2.0), a Gigabit Ethernet port and a full-size HDMI socket.

There’s even a DVD writer optical drive on the side for those who still like to buy retail games or have a shelf of classics at home, and an SD card reader on the underside of the front. It’s all you should need.

The Asus RoG GL552’s keyboard and trackpad are a mixed bag. Starting with the good parts, the keyboard is perfectly good. 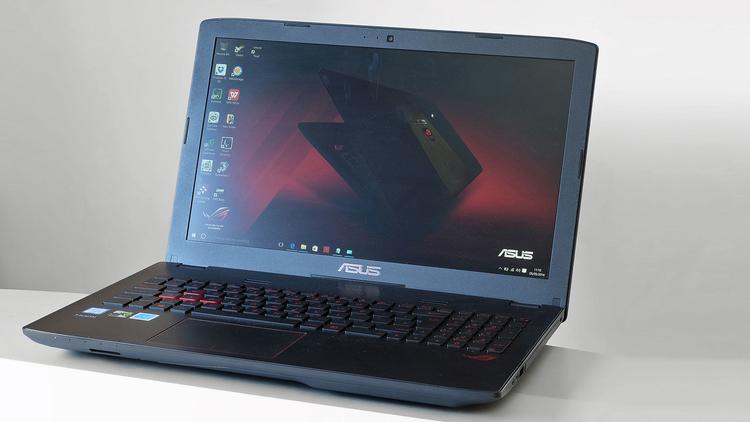 It doesn’t have the ultra-deep action of the RoG G752, but feels definite and solid enough for a good experience whether you’re gaming or typing. The key feel has a soft edge to its click, but isn’t remotely spongey. The red backlight is good too, making the keys clear while being less distracting than a standard white backlight.

The trackpad is more problematic. It’s a good size, but the feedback and button layout are questionable.

Rather than just clicking on touch, there’s a ‘pre-click’ zone, a soft part to the pad travel before you hit the actual button. While taps in this zone register just as you can ‘click’ just by tapping lightly on most trackpads, it’s not how most of us use our pads.

This soft zone makes actually pressing the button feel stiffer, like more of an effort. Asus has also split the pad down the middle, making it easy to accidentally press the right button when you mean to press the left. It’s annoying and may take a while to get used to. Higher-end RoG laptops use separate mouse keys below the pad to avoid this exact problem.

The Asus RoG GL552 has a 15.6-inch screen and, like Asus’s other gaming laptops, it has a matt finish rather than the more trendy glossy style. This makes reflections less obvious, with a slight trade off in how much image ‘pop’ colours have.

In short, it isn’t as good as we’d want for this price. But that has little to do with the screen finish. While some of the GL552 versions use an IPS panel, this one has a TN model. This is the screen technology used in most laptops and monitors five years old or more. TN’s main issue is poor angles viewing, and even with the latest ‘modern’ TN screens, that limitation hasn’t been overcome: it’s inherent with the technology.

You can move to the left or right of the Asus RoG GL552 and its screen will look fine. However,  look at it from higher or lower than square-on and it’ll appear either very washed out or dark, as if a shadow has been cast on the screen from the inside.

You may find this disconcerting if you’re used to the wide viewing angles of most tablets, where screen quality is generally very hight these days.

The TN panel also affects colour. It covers just 57 per ent of the sRGB colour gamut, 39.4 percent of Adobe RGB and 40 percent of DCI P3. Colours don’t look all that punchy as a result. Asus has made the most of an uninspiring panel, though, with good calibration resulting in a Delta E of 0.23.

Contrast and maximum brightness are fairly poor too, though. The display ramps up to a just-ok 230cd/m, meaning this isn’t a laptop you’ll be able to take out to use in the park on a sunny day. But let’s be honest: were you thinking about doing so before this point? Its limited contrast also makes the G552 less than ideal for watching or gaming in dimmed lighting. The raised blacks are quite obvious.

One of the great things about buying a mid-range gaming laptop rather than a penny-pinching one is that you get the components required to make an all-round great PC. An SSD is a crucial addition, making the whole system feel a lot faster day-to-day even though it will usually only significantly affect load speeds and (on occasion) texture pop-in in games.

The GL552VW on test here has a 256GB SSD, as well as an old-school 1TB hard drive. This is a great combo. You get enough space on the SSD for the OS and the games you’re currently playing, plus masses of room for your music and video collection, which would be a waste of fast SSD space.

This laptop also has the same CPU you might find on a gaming laptop twice the price, an Intel Core i7-6700HQ. It’s a quad-core processor clocked at 2.6GHz, designed for power rather than battery longevity.

It scores a solid 3102 in the PC Mark 8 Home benchmark and 12432 in Geekbench 3 (3164 single-core), which isn’t even that far behind the 13823 of the Asus RoG G752. In pure power terms, you could absolutely use this as your sole PC and be happy with the results, unless you need the extra power you get with desktop-grade chipsets. Most people don’t.

The GL552VW’s graphics card is where we head back to performance more commensurate with the price. You get a GeForce GTX 960M, which is a middle-ranking card and probably the best fit right now for gamers who just can’t afford top-end hardware.

Its results are, thankfully, pretty good. This is not a laptop that will let you play all the latest games with settings maxed-out, but you should be able to play most at 1080p and still have them look good. In Thief, for example, the GL552 hits an average of 62fps at low settings, 720p. It’s ideal speed, but less-than-ideal visual quality.

At 1080p with everything maxed, the average is 28.2fps. It’s playable, but when the frame rate dips to 21fps on occasion, you might want to just nudge back a few of the visual settings to ‘mid’ rather than ‘high’. It can do justice to the game, though, making it look similar to what you’d see from a PS3 or Xbox One.

Our Alien: Isolation test flew by even at max settings, though, managing an average 53fps at 1080p, and 130fps with the settings pruned right back and the resolution set at 720p. This is good level of performance for someone who likes gaming but doesn’t want to have to remortgage their house just to afford a suitable laptop.

For an upgrade to the next level of speed, you’d likely have to pay well over £1000. It’s not powerful enough to form the base of a VR setup, though, and isn’t going to look too hot two years down the line.

Under strain GL552VW doesn’t end up sounding like it’s working too hard. The fans run constantly but are very quiet under light loads, and only kick into serious spinning when you’ve been gaming for 20 minutes or so. Their tone never becomes too annoying: no issues there.

A significant amount of heat is pumped through the vent on the left side of the GL552, but at least this is not the side you’d use a mouse.

It’s a good job this laptop isn’t inordinately noisy because the speakers aren’t too impressive. They’re not particularly loud and their sound is quite thin. These are bog-standard laptop speakers, not ones with a bit of extra gaming/entertainment pizzazz.

One thing you should never expect in a gaming laptop is good battery life. These machines aren’t meant for whole days away from the power socket.

Playing video back at 120cd/m screen brightness, the Asus GL552 last four hours 50 minutes. This is a fairly standard performance for a gaming laptop, and is also no indication of how long it’ll last when actually playing either. Make the GPU work hard and it’ll likely be dead within 90 minutes.

The message is clear: don’t buy the Asus GL552 or anything like if it you want a laptop that’ll last for a full day’s work as you sip coffees in Starbucks.