This Jisiwei robot vacuum cleaner will never replace either your main vacuum cleaner or your security camera, but it certainly takes the pain out of cleaning the whole house, and it is an undeniably cool gadget to show off to your visitors.

With an onboard camera, the Jisiwei Smart Vacuum Cleaning Robot is much more than just a futuristic robot vacuum cleaner. It’s said to be the first of its kind to also operate as a home-security device, but even without that functionality it’s a pretty cool gadget to show off to your guests. (Read all digital home news and reviews.)

The Jisiwei S+ is sold by GearBest, which exports it from China to countries including the US and UK. At the time of writing you can find it for £150/$200, about half of the original price, but bear in mind you may have to pay some import taxes on it too. 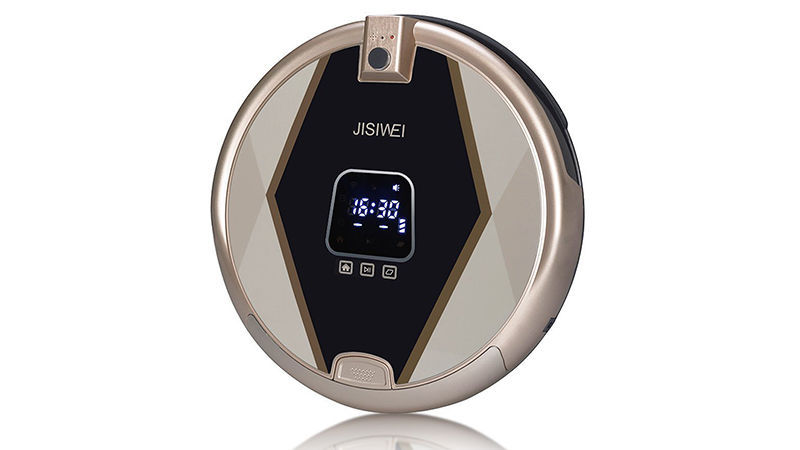 Jisiwei S+ Smart Vacuum Cleaning Robot review: What it is, what it does

No doubt you’ve heard of robotic ‘hoovers’ before, but you may not know how they work, or how well they work.

In brief, a robotic vacuum cleaner such as this Jisiwei S+ can be triggered on-demand, scheduled or remotely controlled to automatically clean the floor, then return to its base for recharging once it’s done. It will operate in various patterns to ensure it covers every inch, or you can use directional buttons to make it clean where you want.

It sounds awesome, but as we’ll explain later there are a few things you still have to watch out for.

This Jisiwei has both a traditional fabric brush, plus two rotating cleaning brushes at the front that help it get right into the corners despite its circular design. You can also affix a fabric pad to the bottom to ‘mop’ the floor. Also see: Best smart lightbulbs 2016. 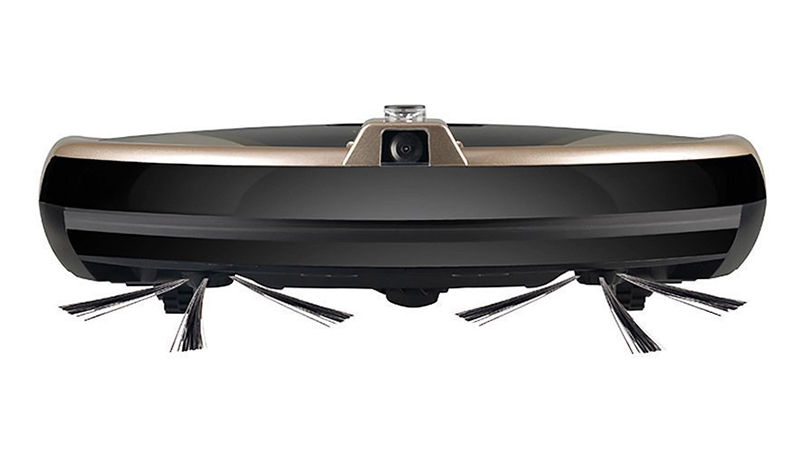 There’s a large LCD screen that displays the time, alongside icons that confirm which mode it is in and whether the Jisiwei S+ is connected to Wi-Fi. This is necessary in order to connect to the Jisiwei from your smartphone, but once you’ve configured the robot to pair it to a new phone all you need do is log into the app, scan the QR code on the rear of the device and give the Jisiwei a name (Vincent became Veronica when we heard its voice, which alerts you when auto-cleaning or -charging is about to commence).

Above the LCD is an HD (1080p) camera, and as we mentioned earlier the Jisiwei S+ is said to be the first device of its kind to also include surveillance monitoring. Enter your email account details on the app and you can configure audio- and motion-detection, and get an email whenever something suspicious occurs.

Using a vacuum cleaner as a security camera is a bit of a weird one, though: if the Jisiwei S+ was to disturb a burglar it would most likely scare the life out of them or they would simply pinch it, too. And the alternative suggested use – to monitor your loved ones from afar – is a bit creepy. If you do see something interesting, you can tap a button on the app interface to take a photo or record video. 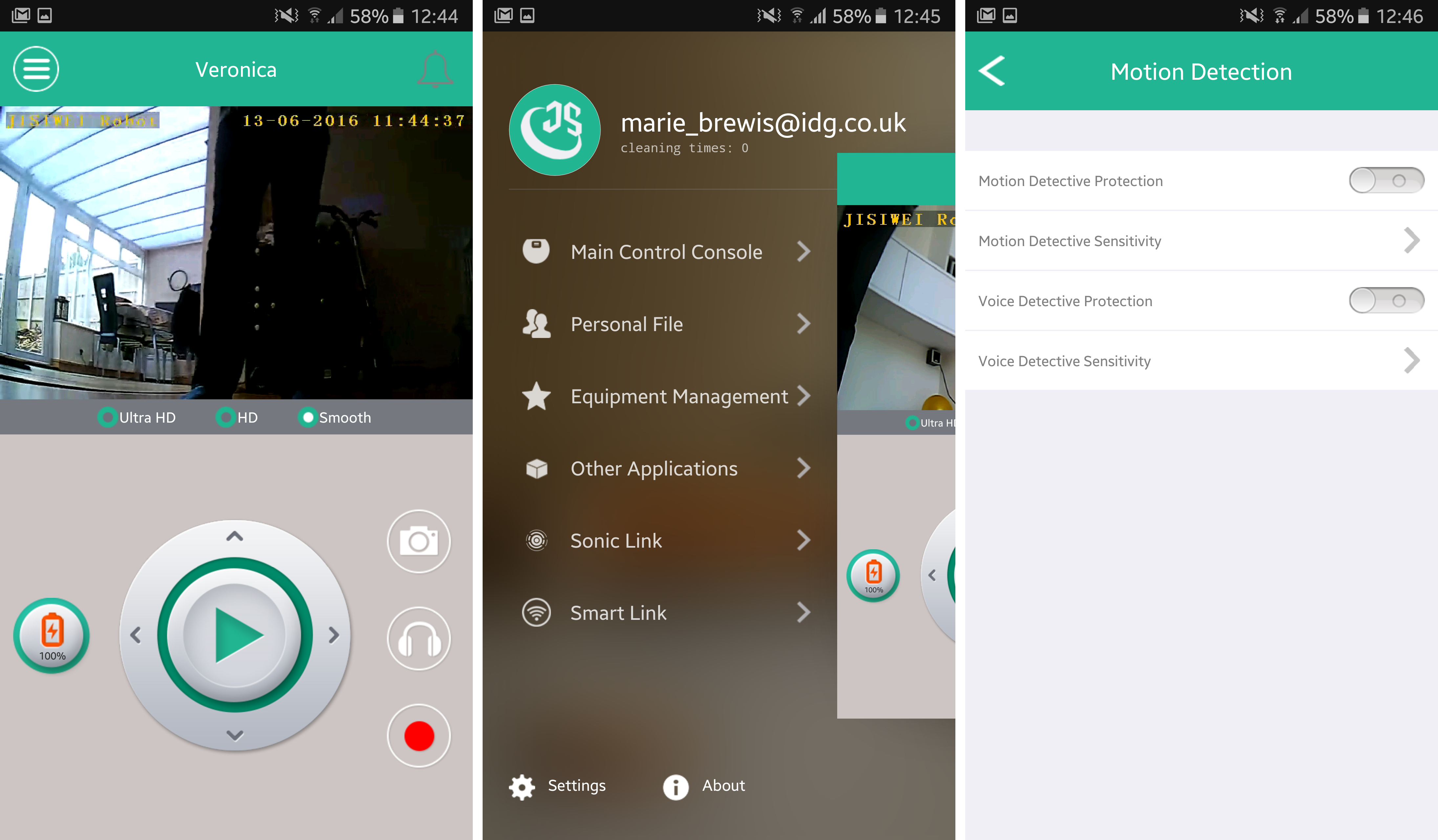 The vacuum cleaner is controlled in one of three ways: via the free Jisiwei Robot mobile app; via the bundled remote control; and via three buttons on the device’s front that simply set it to start automatic cleaning, enter mop mode or go home to its base station for recharging.

The mobile app is required to configure the Jisiwei on first use, and to make use of the onboard camera and set up audio- and motion detection, but the remote control is much easier to work with and offers more options if you aren’t wanting to use the camera.

The remote control has a range of 23ft and offers the only way to switch between standard- and fast vacuuming modes, switch between automatic-, mop- and spot-cleaning modes, and to change the clock time and schedule automatic cleaning.

If you won’t be operating the Jisiwei on a scheduled basis, there’s also an option for Full Go, which sees the S+ clean until its battery gets low, automatically return to its base for recharging, and then return to the job at hand once it’s sufficiently powered up.

Although the Jisiwei S+ can take some time to make its way around the house, that’s no bother to you since its automatic cleaning means you can just get on with something else in the meantime. It’s surprising just how well this robot cleaner is able to vacuum the floor, and as you’ll see from the video at the top of this page it handled a Coco Pops emergency remarkably adeptly, albeit flinging the cereal around the floor somewhat with its front cleaning brushes before picking it up.

The 2600mAh battery lasts a good couple of hours in standard mode, but switch to fast mode and runtime is considerably reduced and it’s also a lot noisier. We like the fact it will automatically take itself home to recharge its battery when required, although if it’s in a different room to the base station it can become a little confused – especially if you’ve picked it up and moved it to a different location.

We love the idea of the Jisiwei S+, and it certainly took the pain out of needing to vacuum the entire house, but this robotic vacuum cleaner isn’t about to replace your old Hoover entirely.

For a start, to state the obvious it can’t climb the stairs. If you want to do both upstairs and downstairs you’ll have to move it from one to the other (or buy a second S+, since you can have multiple devices connected via the mobile app, but a pricey option), and the stairs themselves are a no-no. The robot shouldn’t fall down the stairs provided its sensors are clean, but if it does it could prove to be an expensive mistake.

And while it will handle ceramic, marble, wooden and laminate floors with ease, carpets with pile higher than 15mm are a problem. It’s unlikely you will have an issue there, although it didn’t like a long-haired rug in our conservatory and rather than avoiding it the Jisiwei S+ switched itself off displaying an error code.

The error codes do make it easier to work out what’s wrong with the Jisiwei. For example, E001, E002 and E003 mean the edge- and collision-detection sensors that stop it crashing into walls and objects need cleaning, while E008 means the battery is too low to return home. The error codes are all explained in the user manual.

For any hardware malfunctions you’ll need to return the S+ to a service centre, and it’s covered by a one-year warranty for the main machine and motor, six months for the battery and three months for the side- and main brushes. Jiswei says you shouldn’t leave it plugged in at all times when not in use, and that you should replace the HEPA filter every three months.

Another issue we found is that the cleaning brushes at the front need regularly cleaning of hair and such like that will wrap itself round them, and the dust compartment isn’t especially large so if you have a reasonably dirty home it will need regular attention.

Jisiwei warns that you shouldn’t expose it to too much dust, however, and while it can handle pet hairs it isn’t intelligent to avoid pet mess: something to keep in mind. You should also move out the way any cables or fragile objects in its path – in our tests the S+ swallowed a phone cable, but it did at least stop and allow us to remove it before causing any damage.

Read next: How to make your home a smart home