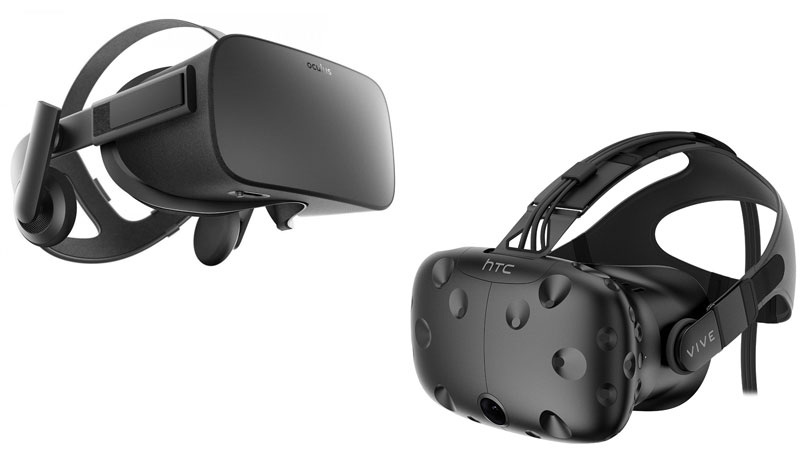 We love the HTC Vive, we think it provides users with an incredibly immersive experience aided by the room-scale tracking and bespoke controllers. Yes, it takes a little bit longer to set up and it’s more expensive than the Oculus Rift, but if you can afford it, we’d recommend it. The Oculus Rift is also a great option and will provide users with a similar experience once the Oculus Touch controllers are released later this year, but right now the Xbox One controller doesn’t do it justice. However, with that being said, we haven’t had an extended amount of time with the Oculus Rift just yet so we’ll reserve our final verdict for now – make sure you check back soon for our full comparison review.

Before we go any further, let’s first discuss the pricing and availability of the HTC Vive and Oculus Rift. The Oculus Rift launched in January with orders shipping out from the end of March 2016, while the HTC Vive went up for pre-order in March with pre-orders shipping from April 2016. Either way, both headsets are now available to buy – although you may have to wait a while to get your hands on one. If you pre-ordered an Oculus Rift headset right now, it wouldn’t be shipped until around August 2016.

On the other hand, those who order the HTC Vive right now will get it slightly sooner, with orders shipping in June 2016. With that being said, the HTC Vive is the pricier of the two coming in at £689 compared to the £499 Oculus Rift, but we feel like the high price tag of the Vive is justified with its offering – it offers room scale tracking, bespoke controllers and more, but we’ll go into more detail about that below.

Let’s discuss the design and build of the two rival virtual reality headsets. Both the HTC Vive and Oculus Rift, broadly speaking, look similar in terms of basic design – both are fairly lightweight, black in colour, are fairly comfortable to wear thanks to the soft material around the edges and features a head strap for extra support, but there are a few notable differences too. 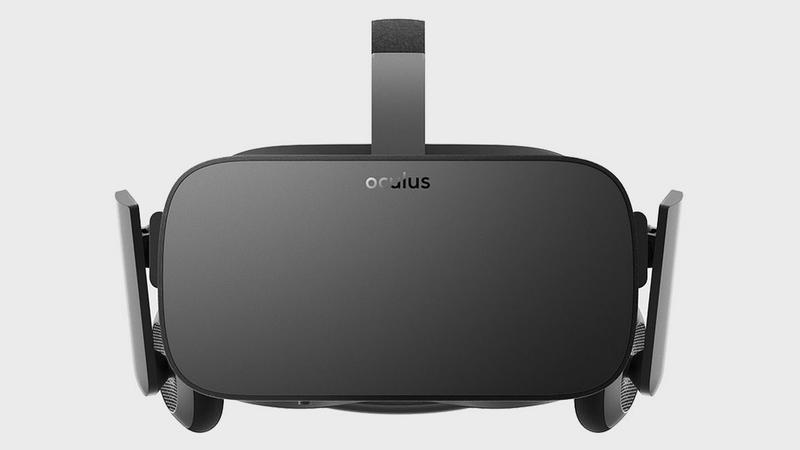 The first is weight – yes, both are lightweight, but the Oculus Rift is the lighter of the two headsets measuring in at 470g compared to the 555g HTC Vive – and that’s with the Oculus Rift’s built-in headphones, which the Vive doesn’t feature. Although there is a difference in weight, the head strap takes most of the weight from the front of the face and should provide a fairly comfortable viewing experience across both the Oculus Rift and HTC Vive.

It’s not just in terms of weight that the Oculus Rift wins – in terms of size, the Oculus Rift is definitely the more refined than the fairly bulky HTC Vive. It’s fairly compact and is covered in black fabric making it nice to touch, whereas the HTC Vive is more prominent and is clad in visible sensors – 37 to be precise. We’ll explain why in a little more detail below, but we think it’s worth the design trade-off. 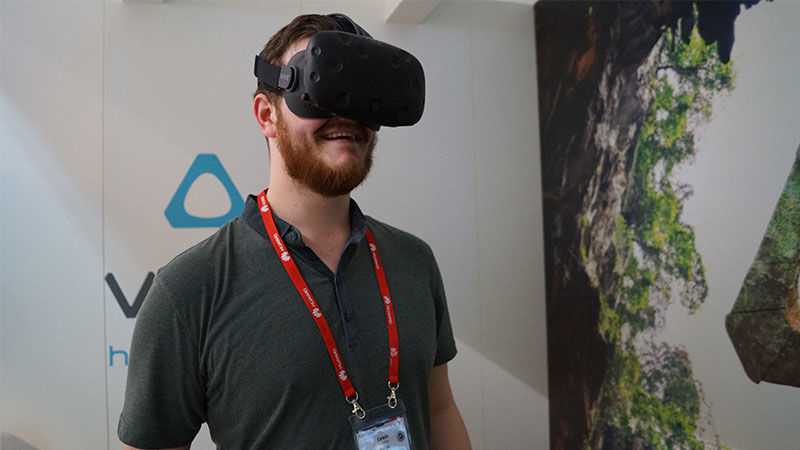 Also, the HTC Vive features a lens distance know that moves the Vive lenses further or closer to your face, which is ideal for those of us that use glasses. The Oculus Rift can also be worn by glasses-wearers, but it doesn’t feature any kind of distance adjustment.

Let’s move on to the features of the two rival headsets, as this is where most of the differences are. Let’s start with the setup – the Oculus Rift features built-in Windows 10 support and as such, allows for an almost ‘plug and play’ experience with very minimal setup time. If you want something that’s simple to set up, then the Rift looks to be the better option.

The HTC Vive on the other hand features a pretty complicated setup process, mainly due to the fact that you have to set up a physical play area using the base stations, install Steam and HTC Vive software and then run the initial tutorial that shows you how to use the headset and controllers (which can’t be skipped either!). The installer claims that the setup usually takes around 30 minutes, but we found that it was closer to 45 minutes. 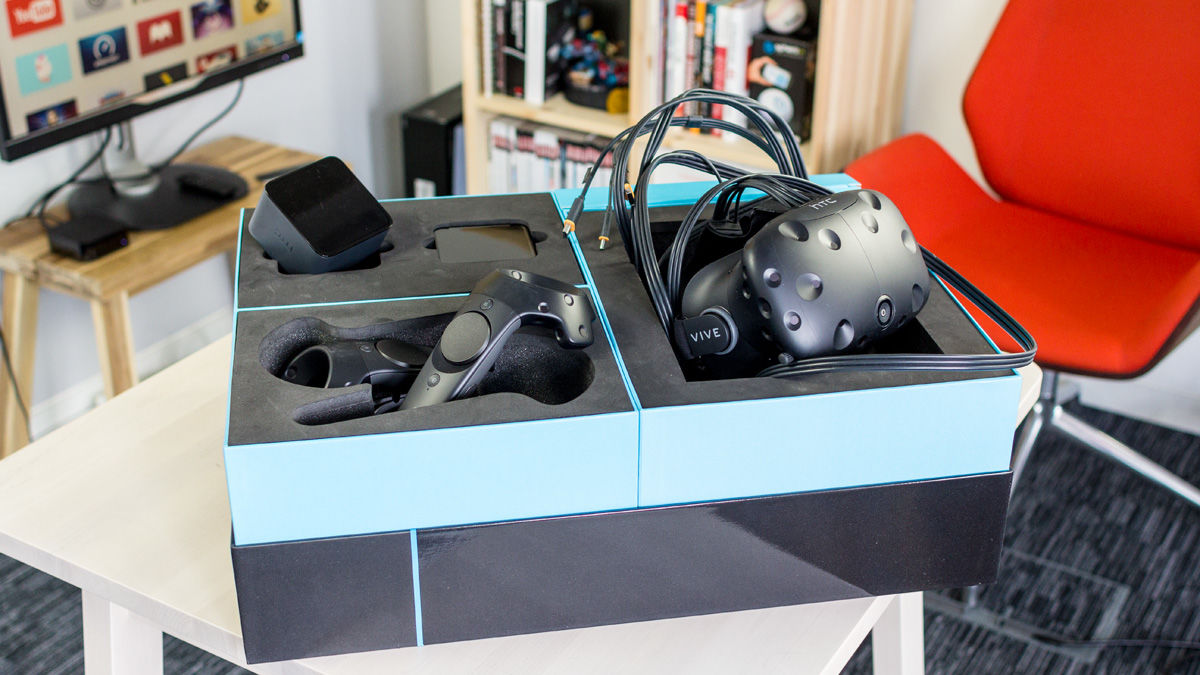 But why? Well, that’s because the HTC Vive features room-scale tracking that allows you to physically walk around and explore the virtual environment around you while the Oculus Rift can only offer users a standing/sitting experience with no real movement tracking.

The Vive can measure your location within a 5x5m space (or smaller if you don’t have the space) thanks to two base stations that sit on either end of your play area and combined with bespoke controllers that allow you to reach out and interact with the objects around your virtual self, the Vive provides the most immersive VR experience possible at this time. See a gun on the floor? With the Vive, you’re able to physically walk over to it, bend down, pick it up and fire it at your incoming enemies. It adds a level of realism to the experience and helps trick the senses even further, and is hard to accurately describe. 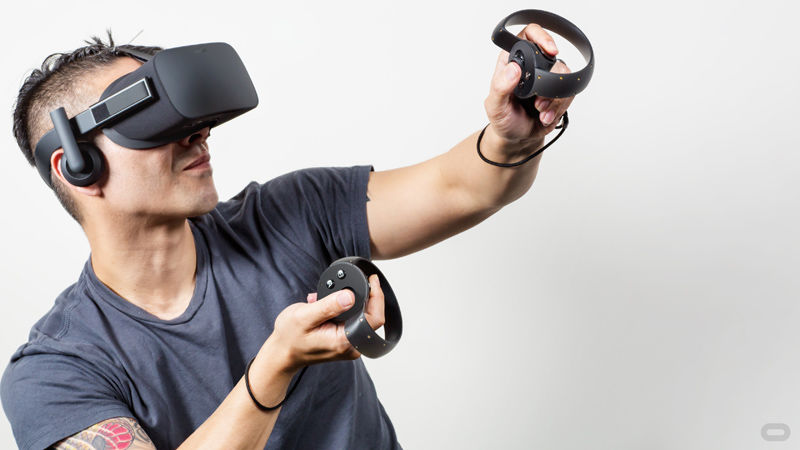 Don’t get us wrong – Oculus is also developing similar bespoke handheld controllers called Oculus Touch, but sadly these won’t be released until near the end of 2016. That means that until that time comes, Oculus Rift gamers are stuck with an Xbox One controller that can’t come close to matching the Vive controllers. Even once the Oculus Touch controllers are launched, it still doesn’t change the fact that the Rift doesn’t track your physical location and as such will only let you reach out and interact with objects, not walk around.

There’s no word on pricing for the controllers either, so they could be fairly expensive, especially when you consider that a PS4/XB1 controller can set you back anywhere between £35 and £50 depending on where you shop.

The HTC Vive has a few additional features that make it stand out against the Oculus Rift, too. Firstly, it has built-in Bluetooth and smartphone support which means you can connect your phone to your headset when using it and if you get any calls or texts, you can deal with these without needing to take the headset off. You’ll get little text notifications and, depending on your setup, you may even be able to take calls. It also features a front-facing camera that provides you with an overlay of the real world around you, helping you to avoid any objects in your immediate vicinity.

Right, let’s get down to possibly the most important section of our comparison – the games selection. While many had hoped that Oculus games would play nice with HTC Vive games and vice versa, it seems that isn’t the case and instead the two have a similar relationship to the likes of PlayStation and Xbox. The Oculus Rift had 30 games available at launch while the HTC Vive had 20 more, totalling 50, at the beginning of April. There is a myriad of HTC Vive games in development at the moment due for release over the coming months, as is with the Oculus Rift.

The Oculus Rift has more exclusives than the HTC Vive, including Lucky’s Tale and EVE: Valkyrie (for now anyway) so if you want to be able to brag about playing a game only a portion of VR players can play, the Oculus looks to be the better choice. However, there have been more and more updates pushed via Steam recently that enable HTC Vive support, including the likes of Project CARS, offering Vive users a VR-ready driving simulator. 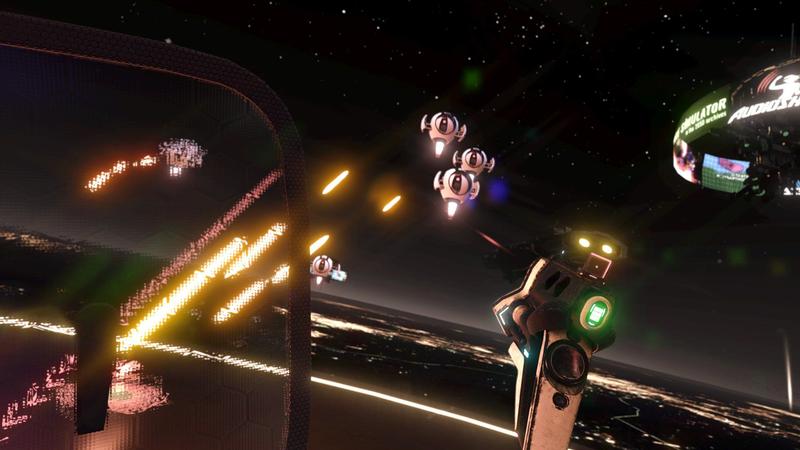 One annoyance is that while Oculus Rift owners can browse Steam, owned by Valve, co-producer of the Vive, HTC Vive owners can’t browse the Rift equivalent, Oculus Home. Oculus CEO Palmer Luckey has stated in the past that Oculus “can only extend our SDK to work with other headsets if the manufacturer allows us to do so” insinuating that HTC and Valve are to blame for the incompatibility issues, although Valve has refuted the assertion.

Essentially, it comes down to choice – sure, Oculus may have more exclusives but HTC Vive games are arguably better quality due to the fact that you can walk around and use the bespoke Vive controllers while with the Rift you’re pretty limited in terms of what you can do. We’d advise taking a look at the Steam VR listings page as there is where you’ll find a complete list of VR-ready games, and will also tell you if they’re compatible with the Rift, Vive or both.

Despite the high cost of both the Oculus Rift and HTC Vive, the real hidden cost is in the computer hardware that’s required to power those graphically intense VR-enabled games. Both the HTC Vive and Oculus Rift require a pretty beefy GPU, with either a Nvidia GTX 970 or AMD R9 290 as a minimum. To give you some idea about the price, the GTX 970 costs around £340 at the time of writing. 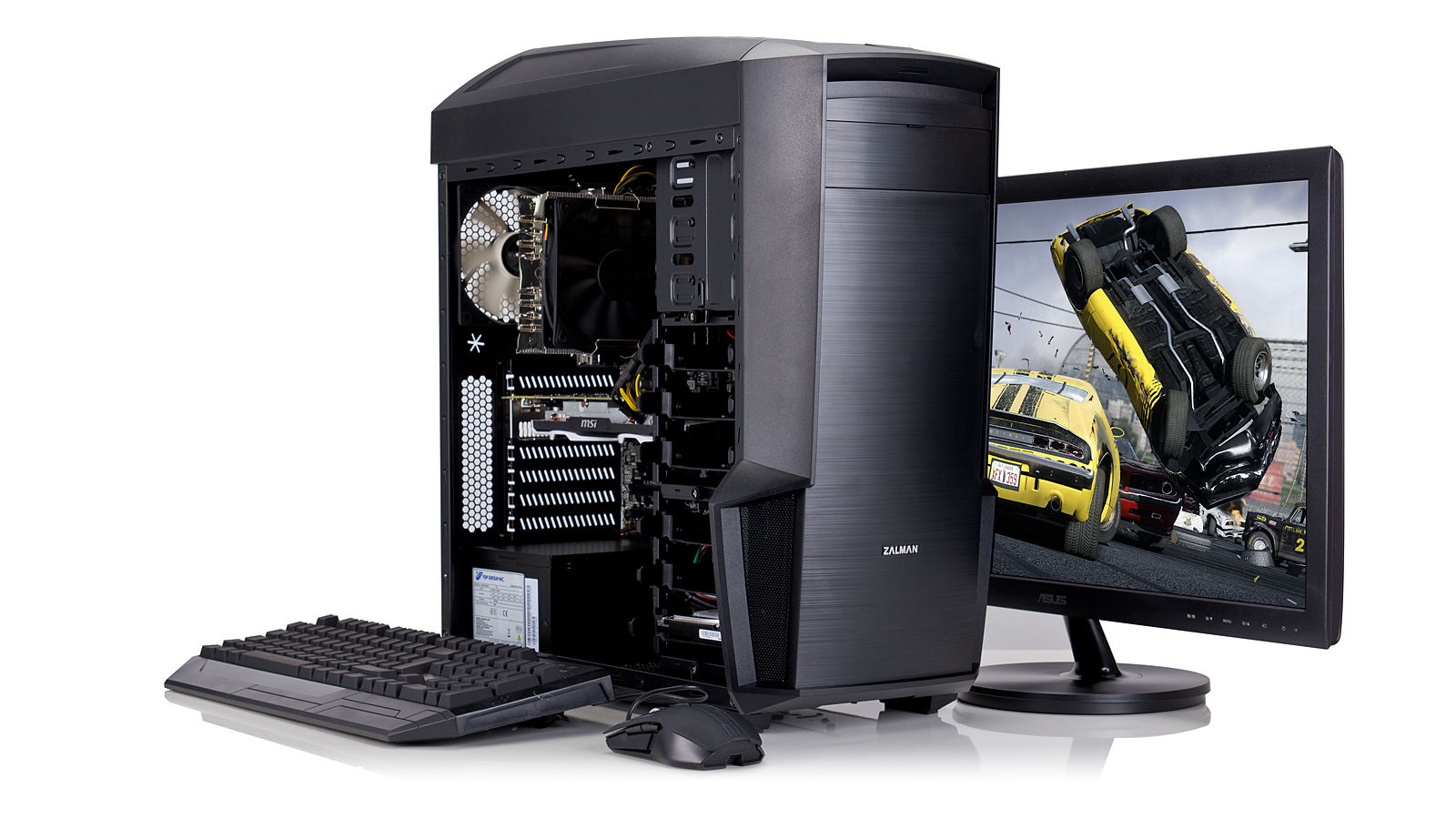 It doesn’t stop there either, as the Oculus Rift also demands an Intel Core i5 4590 processor (around £170) or better, and at least 8GB of RAM. The HTC Vive isn’t as demanding in this area, asking for an Intel Core i5 4590 or AMD FX 8350 or greater but only a minimum of 4GB of RAM. It’s also worth noting that the Oculus Rift requires an HDMI 1.3 port or better, as well as two USB 3.0 ports. The HTC Vive, on the other hand, requires either an HDMI 1.4 port or better, or a DisplayPort 1.2 or better, along with a single USB 2.0 port.

We’d recommend taking a long hard look at your existing PC setup and decide which is better for you, as you’re already splashing out a minimum of £500 for the headset without any PC upgrades.