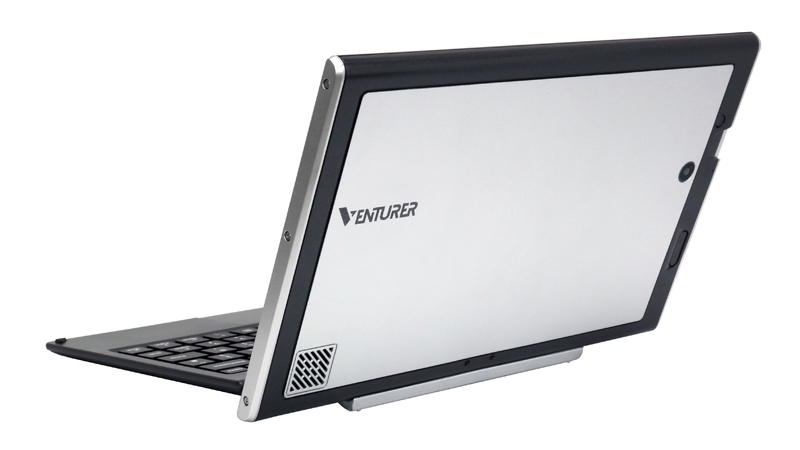 If you don’t mind what it looks like, the Venturer BravoWin 10KT is an ideal budget option for students. It costs just £150 and can be with you tomorrow, and that price includes a magnetic docking keyboard and a full copy of Windows 10. It’s easily portable and sufficiently capable, if not a speed demon.

Even the cheapest Windows 10 laptops can be out of budget for many students, and a more affordable alternative might be a budget 2-in-1 tablet-laptop hybrid such as this £150 Venturer BravoWin 10KT. We find out exactly what you get in return for not a lot of money. Also see: Best budget tablets 2016 UK.

This 10.1in Windows 10 tablet with magnetic docking keyboard is available in the UK through Amazon. It costs £149.99 with free standard delivery, while a slightly larger 11.6in model costs £199.99.

At this price it’s roughly in line with the Chuwi HiBook, a Chinese hybrid tablet-laptop that dual-boots Android and Windows and costs £143.42 from Geekbuying. Performance is much the same, but the Chuwi has a significantly better build. The trade-off, of course, is the uncertainty of buying the Chuwi from a Chinese importer, and the fact you’ll have to pay extra for the keyboard and may incur a fee for import duty.

The fact you can buy this Venturer from Amazon UK is a real advantage. It could be with you tomorrow (provided you choose one-day delivery), with no extra charges – and should something go wrong, getting hold of tech support should be easier. (We say should, because we didn’t require the services of tech support or customer services during our review of the BravoWin 10KT).

Given that a copy of Windows 10 direct from Microsoft will cost you £99.99, this tablet with keyboard offers extraordinary value. See all budget tablet reviews.

The Venturer BravoWin 10KT  budget tablet is available in all black, all silver, or a combination of silver and black (reviewed here) or gold and silver.

So far so good, then. Until you take the Venturer BravoWin 10KT out of the box. This Windows 10 hybrid has a lot of advantages, but decent design and build quality are not among them.

This thing looks cheap. The Venturer resembles the sort of computer you would have expected to buy five years ago. It’s made from black and silver plastic, with nothing sitting flush with anything else, leaving cracks and crannies everywhere for grime to find its way inside. Chunky bezels framing a non-laminated screen finish off the budget look.

Unlike most modern computers it has an oversized physical reset button, plus a volume button and speaker that bizarrely sit on the rear of the device. Usually you would find a Windows button on the front of a Windows 10 tablet serving as a Home button, but here it’s far too small and out of mind low down on the Venturer’s left edge. Thankfully there’s also a Windows key on the keyboard, providing you have it docked.

And things get worse. When we test phones and tablets we tend to assert pressure to them in the hands to see whether they flex or show any other signs of weakness. The Venturer creaks as soon as you pick it up. Two silver-painted plastic end panels sit either side of the screen, screwed in place but perhaps not as tightly as they should be. It just doesn’t feel as though it’s going to withstand bashing much about in your school bag, which is odd, given that Venturer targets this device at kids.

That’s just how it feels, of course, and according to the company the BravoWin actually performed very well in drop tests. It said: “The Venturer tablets were tested alongside the Surface 3, Lenovo and Asus devices at heights of 0.7m and 1.2m in a factory drop test which involves dropping the same device on at least six different sides and corners. The only tablets that passed at 1.2m were the Venturer ones because the housing of separate end parts provides the housing and the screen more protection.”

It’s fair to say we’ve been pretty harsh on this Windows 10 tablet’s design so far, but there are some upsides, too. The keyboard, for a start, is far easier to use than that which is sold with the Chuwi, and it’ll lean back further to provide a more comfortable typing position. It’s large enough to be reasonably comfortable to use for long periods, and the floating scrabble tile keys – although a little noisy in use – are well spaced.

We love the fact this budget Windows tablet comes with a UK keyboard, and even the trackpad is usable, a 90x40mm component with virtual left- and right-click buttons either side. If you don’t want to use it, you simply pull off the keyboard (which docks magnetically) and switch to tablet mode.

The keyboard is a touch smaller than the screen, with just the silver plastic end caps overhanging it at either side.

The screen has huge bezels and it isn’t laminated, with viewing angles that could certainly be improved, and rounded corners that don’t sit nicely against the tablet’s rectangular frame, but it is an HD IPS screen and it is a useful size at 10.1in. This panel doesn’t offer the deepest contrast or the brightest display we’ve ever seen, and working outdoors in direct sunlight could be problematic, but pushed up to its max it’s quite acceptable, and colours are realistic.

The Venturer isn’t bad for ports and connections, given the price. There is both a DC input and a Micro-USB port for charging, as well as a Mini-HDMI port and a full-size USB 2.0 port, plus 802.11b/g/n Wi-Fi and Bluetooth. Our only quibble is that all these ports sit on the left edge of the Venturer when docked, making them less easily functional for adding, for example, a USB mouse for right-handed users. Lefties should be in their element, of course, and you can always stick with the built-in touchpad and instead use this port for a USB drive or external hard drive.

Also on this edge are a microSD slot for adding up to 64GB of removable storage (very useful, given that there’s just 32GB of internal storage) and a 3.5mm headphone jack.

The Venturer BravoWin 10KT is fitted with front and rear cameras, both rated at 2Mp. That’s acceptable for video chat, but we don’t forsee you making much use of the rear camera – Venturer might as well have not included one.

The best thing about this tablet’s build, though, is how easily portable it is. At 266x168x10.6mm and 600g it slipped right into my shoulder bag and didn’t weigh me down too significantly. Add the keyboard and it’s heavier, at 1080g, and thicker, at 23mm – but that’s still fairly portable for what is in essence a full Windows 10 laptop.

The Venturer BravoWin 10KT runs the 32bit edition of Windows 10 Home on a 1.33GHz Intel Atom Z3735F processor and 2GB of RAM. It’s not a speed demon, but it’s perfectly up to the job of browsing the web, reading and replying to emails, checking out what’s happening on Facebook and even playing the odd streamed movie or YouTube clip. It will start to struggle if you try to do too much at once, but then again a 10.1in screen isn’t ideally suited to multi-tasking. If you need a bigger screen you can use the Mini-HDMI port to hook it up to a TV or monitor.

Casual games are even a possibility, given the results of our GFXBench graphics test. Although the Venturer would run only the T-Rex component, it did so at 22fps. We run the onscreen version of this test, so here the only HD resolution would have helped it to perform.

We also ran the PCMark 8 Home and Geekbench 3 general processing power benchmarks on the Venturer, and in both cases it scored on par with the Chuwi HiBook. We recorded 1105 points in PCMark 8 and 2205 in the multi-core component of Geekbench.

Our final test is JetStream, which measures JavaScript performance in web browsing. The Venturer scored 35.341, which is a tad behind the Chuwi HiBook’s 37.423 when running Windows 10, and better than many mid-range smartphones.

Venturer doesn’t specify the exact battery capacity of this tablet, but says it’s good for eight hours life. Battery life is an incredibly difficult thing to judge, given that everyone uses their devices differently. We ran the PCMark 8 battery life test to estimate how long it would last in the real world and it reported 3 hours 16 minutes. Of course, the good thing about being able to charge this tablet/laptop combo over Micro-USB is you can always carry a power bank with you.