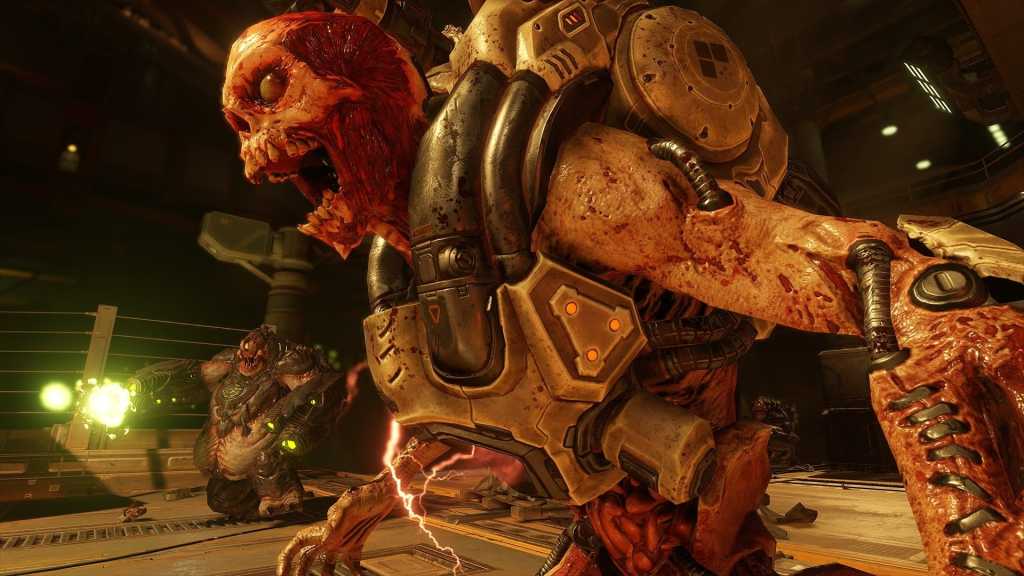 DOOM is a hugely entertaining game that’ll bring hours of joy, but for reasons totally different to the likes of the visually stunning Uncharted 4. DOOM taps into something primal in all gamers – the need to go on a rampage and slaughter everything in sight in creative and fun ways. There isn’t any time wasted on telling an in-depth story with a relatable protagonist, it’s about eliminating demons from Hell on Mars. Simple. The buttery-smooth game mechanics makes taking on hordes of demons a fun and exhilarating experience and while the online side may be a little underwhelming at the moment, we hope it picks up somewhat in future.

“ Doom is a special part of each of our gaming histories”, explained Id Software during the E3 2015 press conference in which Bethesda announced Doom. “The foundation of any Doom experience is centred around three things: badass demons, big fucking guns and moving really fast“. DOOM is one of the most anticipated games of 2016 alongside the likes of Battlefield 1, Final Fantasy 15, No Man’s Sky and more, but does it live up to the hype? Or is it just another failed reboot? We spent some time playing DOOM, and here’s what we thought. Read next: Best PS4 games of 2016

If you thought that DOOM was a sequel to the somewhat disappointing DOOM 3, you’d be mistaken. DOOM takes it back a step, and is instead a complete reboot of the series that first launched back in 1993, bringing the game back to what it originally was – exciting, fast-paced and relentless.

You start strapped to a table on Mars (of course), someone has opened a portal to hell and within seconds of the game starting, you unleash hell upon the hell-spawn populating the UAC facility. There isn’t a long-winded introduction to the game explaining the mechanics or a cut scene to provide a greater understanding of the protagonist and their motives (the character remains nameless), you’re instead thrown in at the deep end, learning about the various game mechanics as you go along. That’s an early indication of how the game handles the storytelling element – it doesn’t. The game is about non-stop action, and not even a story should distract you from that, so it doesn’t. The story itself is pretty weak, but should be enough to keep you going.

DOOM is, as the original was, all about brutal, chaotic and gory fighting. The environments presented in DOOM are intricate and detailed, filled with strategically placed power-ups and secret paths that provide alternate ways to play the game and even a few secret areas filled with collectables and new guns. The majority of the game takes place in open arena style areas where you face wave upon wave of increasingly difficult (and surprisingly smart) demons. Sometimes the door is locked until all demons are eliminated, while other times it’ll stay locked until you destroy a Gore Nest and wipe out the subsequent hordes of demons.

DOOM utilises a combat system known as “push forward combat” where there is little to no cover and no health regeneration, forcing players to get into the thick of the action and think on their feet rather than taking enemies down from cover. The constant worry of being wiped out keeps players on their toes because, honestly, if you stop for more than a few seconds you’re pretty much dead.

It’s during these adrenaline-filled battles that the real beauty of DOOM reveals itself – the beauty of pure chaos. There’s no better feeling than slaughtering collections of demons, watching their body parts fly across the room as your shotgun shells disintegrate them, and stepping out of it the other side knowing that you caused (and survived) the carnage.

This is aided by Glory Kills, which are as gory and glorious as they sound. When you’ve given a demon a good enough beating, they’ll start to stagger and when they do, you can activate a Glory Kill. Aside from killing any enemy instantly, the beauty of the Glory Kill is that the style of kill varies depending on how you initiate your attack and the enemy itself. Attacking an enemy from above? You might end up landing on their head and ripping it off from its solders. Attacking a demon with rocket launchers from behind? You’ll reach in and short circuit the launcher rig, causing it to explode.  Click here for more games news and reviews

It’s the variety of Glory Kills that makes it so fun because you’ll find yourself going out of your way to find new and creative ways to finish off your enemies. Downed enemies will drop health and ammo too, making it a great way to replenish health when you’re running low – if you can dodge the barrage of incoming attacks for long enough, anyway.

Weapon customisation is a key part of DOOM, offering multiple mods and upgrades for many of the weapons you collect throughout the campaign, all offering something slightly different. Before you can apply any upgrade or modification you have to get a new mod from support drones, which are hidden throughout each level and harder to come by then you’d first imagine. Once you unlock a mod, you can enhance the mod by spending upgrade points earned by, essentially, eliminating the demons from hell and generally causing carnage.

Many weapons offer a choice of two mods and while you’ll have to get two separate mods from drones to use both, you can quickly swap between the mods during gameplay. This provides gamers with a wide range of weapons equipped for a variety of situations, from taking on hordes of weak Imps with an assault rifle to battling rampaging Hell Knights with a grenade launcher-touting shotgun. It’s the same story with your suit too, as you’re able to collect upgrade points to upgrade various elements of your suit as well as your maximum health, armour, and ammo.

The DOOM online multiplayer mode is a different beast altogether, though, offering more closed-quarters environments perfect for online gameplay. However, with that being said, DOOM offers something akin to the likes of Call of Duty rather than arena based combat that would suit DOOM more. What do we mean? Players have custom loadouts of weapons and an experience-based levelling system, when we feel like DOOM online should be more arena based where players have to scavenge for armour, weapons, and ammunition themselves, rather than starting the game with their favourite weapons.

The Call of Duty-esque theme is also apparent in the game type selection menu, as the various game modes are suspiciously familiar. You get the bog standard Team Deathmatch mode along with Domination, a control-point mode, Soul Harvest, which is a rip-off of the CoD Kill Confirmed game type and Clan Arena, a team-wide elimination effort. There’s also a Freeze Tag game mode where you freeze enemies upon killing them, but with a twist – enemy team mates can reverse the effect. The idea is to freeze the enemy team in its entirety before they do the same to you.

The issue is, as we found, was that some game modes had practically no-one playing them. We tried joining a Team Deathmatch game on Sunday afternoon following DOOM’s initial release and found no matches at all. None. It’s the same story with Freeze Tag – we couldn’t find a single match. This may have been due to server errors on DOOM’s end but we could join a Soul Harvest game with no issues, so we’re not too sure about the server error angle. Either way, we’ll keep an eye on this in the coming days and update the review accordingly.

One area where the online multiplayer exceeds is with character and weapon customisation. While you may not get access to the cool mods of the single player game, players unlock a variety of customisation options including different colour paint/decals for weapons as well as different suits to wear. There are over 300 options to collect apparently, enabling users to create a character completely unique to them for use online.

Read next: Best game deals in the UK