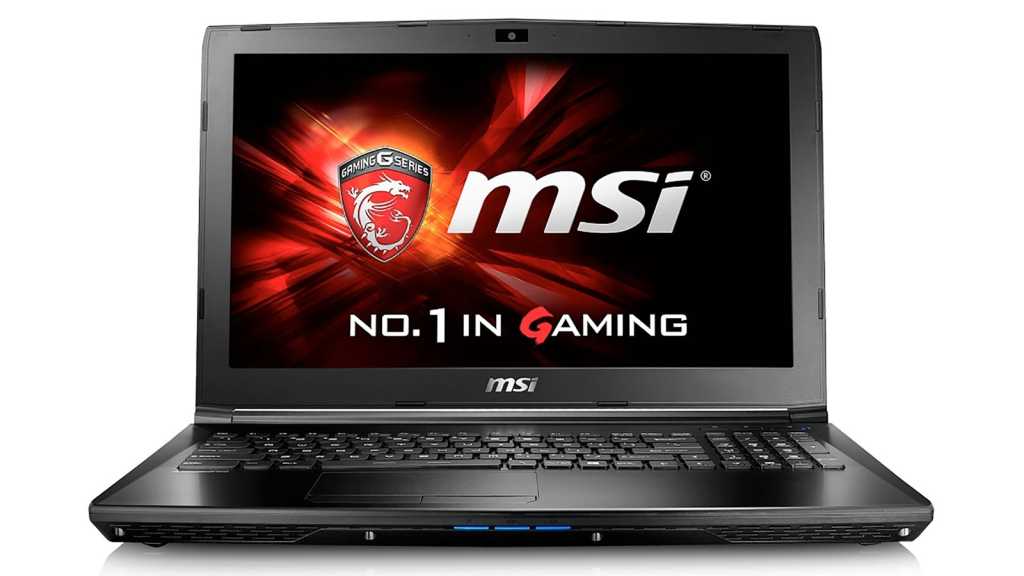 The MSI GL62 looks like a pretty plain entry-level gaming laptop at first, but it has a few neat tricks up its sleeve. Not everyone’s going to love the SteelSeries keyboard, but its mechanical key-inspired feel is something different, and its display colour saturation is impressive at the price, even if the screen won’t blow you away in other respects. It does rather highlight the problem with today’s affordable gaming laptops, though. Its GPU will still leave you scrabbling around at low graphics settings to get satisfying frame rates in recent games and the lack of SSD storage means the system doesn’t feel as speedy day-to-day as laptops with much less powerful CPUs. This isn’t a laptop for hardcore gamers or performance snobs, but it is a solid machine with the right level of future-proofing and a display that makes a punchy first impression.

It’s a bit of a patchwork of hits and misses, though, and we’d advise getting a slightly higher-end spec than we’re reviewing if you can afford it as it will really pay dividends for discerning gamers. This one can only handle recent demanding games at bottom-rung settings and its lack of SSD storage means our MSI GL62 lacks the zippiness of some otherwise less powerful laptops at the price. More on that later.

Note: Since our review was written, the specific model we tested is no longer available. However, a virtually identical 6QD model is available for the same price and has the GTX 950M instead of the 940M.

This version has a GeForce GTX 950 GPU, a quad-core Core i5 CPU and hard drive storage rather than an SSD.

The GL62’s rivals include the HP Pavilion Gaming 15 which costs from £719 and is similarly a subtle gaming laptop. However, you should also read our roundup of the best gaming laptops to buy right now. 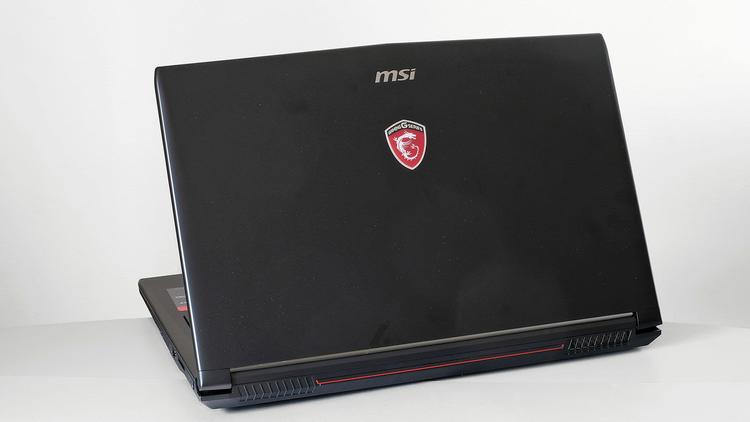 It’s not hard to spot a gaming laptop, but the MSI GL62 has little bits of gaming flair here and there rather than opting for an outrageous colour scheme or flared vents and mad logos. The keyboard font, the badge insignia on the lid, the odd bits of red trim and some of the GL62’s angles are all obvious ‘tells’ to an experienced eye.

This means the MSI GL62 isn’t a laptop that’ll make you feel self-conscious in public like an Asus G752 could. It successfully treads the fine along a few boundaries with confidence.

This laptop has a metal-covered lid but the rest of the laptop is plastic, as used in the vast majority of gaming machines. It doesn’t try to push its luck with thickness or weight either.

At 2.3kg and 29mm thick, the MSI GL62 isn’t light or small enough to be considered a portable laptop. You’ll want to keep it at home most of the time.

While it has a sensible, slightly conservative design for a gaming laptop, the MSI GL62 does have up-to-date connections. It features two USB 3.0 ports, one USB 2.0 port on the right side and an additional USB-C. It’s reassuring to see MSI has added has effectively added an extra USB with the USB-C socket, rather than using it as an excuse to pare down the total number of plugs.

It’ll be a while before everything uses USB-C, after all.

The MSI GL62 also has the main connections required of a desktop-replacer. It has HDMI and Mini DisplayPort video outputs and a full-size Ethernet socket. Many of you may be happy with using Wi-Fi, though, particularly as Wi-Fi ac is supported.

Around on the other (right) side of the MSI GL62 are a DVD Multiwriter optical drive and a full-size SD card slot. Just as the MSI GL62 strikes a good balance between a gamer-tinged look and an ordinary one, the laptop has an ultra-accessible set of connections that’ll suit the sort of buyer to whom a lower-cost gaming rig might appeal.

There’s a similar melding of worlds in the MSI GL62 in the screen too. The laptop has a 15.6in 1080p resolution display, but unlike most modern £500-plus laptops does not use an IPS screen. 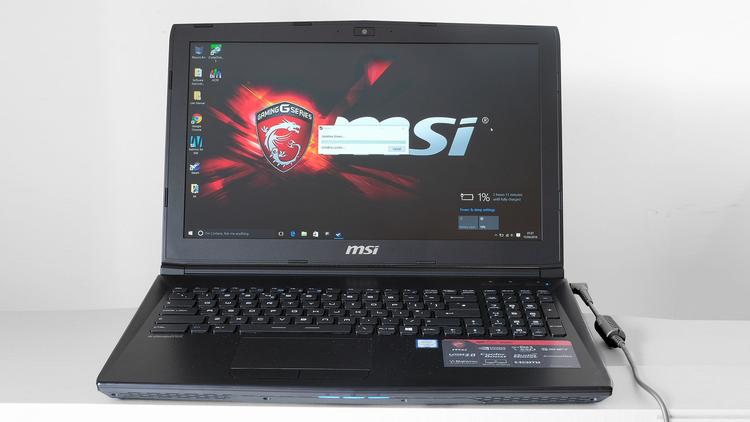 It’s not a plain old TN screen either: MSI using something a little different. The GL62 has TN-based screen, but its tweaked architecture makes it look much better than other TN displays. MSI calls it a “world first”.

Its colour is fantastically vivid for a laptop of this price. It can display deeper, richer tones than many a £1000 laptop.

Setting our colorimeter loose on the  MSI GL62, it hits 99.7 percent of sRGB, the usual standard for laptops, as well as 77.8 of Adobe RGB by volume and 85.7 percent of the cinema-grade DCI P3 standard. We’ll admit to being genuinely surprised to see such an affordable laptop provide such rich colour. An IPS laptop at this price might hit 70 per cent of sRGB and be considered more than fine.

It’s the colour that helps give the MSI GL62 screen a bold look, because its contrast alone can’t. Thanks to raised blacks that become really quite obvious even in good lighting when you crank up the backlight, the screen only has contrast of 300:1.

Viewing angles are not close to those of an IPS screen either, despite MSI’s claims. When viewed from a severe vertical angle, there’s severe contrast shift, a typical feature of a TN screen. The effect is nowhere near as bad as a regular TN screen, though. There’s clever ‘wide angle’ tech going on here that’s particularly effective at improving horizontal angled viewing.

If you’re prone to noticing poor black level and are going to be playing in dimmed lighting, maybe this isn’t the best laptop for you. However, its colours look a lot more vivid than most laptops at the price.

The screen has a matt finish, a type that tends not to make colours pop as much as glossy ones. As we’ve said, this is a decent screen for colours. although its 253cd/m2 brightness is nothing special. This isn’t a laptop you’re likely to want to use outdoors much, though. If you’re after a portable workhorse, take a look at the Asus UX range.

At this price, you’re probably expecting some compromises. And you have to compromise more than with a desktop PC at £599.

The GL62 6QC spec we’re reviewing uses a GeForce GTX 940M CPU, one of the lower-end Nvidia cards. Despite being a solid dedicated GPU, you will need to use fairly low settings in order to get smooth-feeling frame rates in today’s more demanding games at native Full HD resolution.

Thief is a classic example of a game that the GL62 struggles with. At 720p with Low settings it averages 35.6fps, but that rate drops to an unusable 14.9fps when resolution is increased to 1080p and graphics settings increased to ‘High’: unplayable.

The much less demanding Alien Isolation test brings better results, but is still too slow in the GL62 with visuals at 1080p/High. It averages 20fps, increasing to 49fps at 720p, Low settings. A GTX 960M or even a GTX 950M (which you get in the HP Pavilion Gaming 15) would let you get closer to the mid-level settings that represent the sort of experience offered by today’s game consoles, the PS4 and Xbox One.

CPU power is without contest the strongest part of the MSI GL62’s performance. The Intel Core i5-6500HQ is a ‘full power’ laptop CPU rather than one of the efficiency-leaning ones used in more portable laptops, and its Geekbench result of 9247 (3034 single) is excellent for the price. It scores a similarly good 2681 points in the PCMark 8 Home test.

This CPU could be paired with a much, much more expensive GPU and still not be the bottleneck for performance.

The shame is that you probably won’t get to appreciate all that power on a daily basis. The reality is that, fitted with a plain 1TB hard drive rather than an SSD, it’s relatively slow to boot-up and come out of sleep mode. It also increases application load times.

Storage speed is such an important part of creating a perception of good performance that the GL62 6QC actually feels a bit slower than a lot of much less powerful laptops. It has the power for photo and video editing of large files, but again you’d ideally want a machine with an SSD if that’s what you’re going to be doing.

The fact that the 6QC’s drive spins at a slow 5400rpm (rather than 7200rpm) makes matters even worse. It’s the second reason, behind the graphics chip, to avoid this particular configuration of the GL62.

Under heavy yse, the laptop’s fans are significantly more obvious than those of the comparable HP Pavilion Gaming 15. Higher-pitched and noisier, they can be a little distracting in quieter rooms.

There is an interesting little keyboard shortcut that lets you ‘switch gears’, to use MSI’s terminology. The eco mode helps keep the GL62 quiet when just performing basic tasks.

The rest of the MSI GL62 keyboard is interesting too. It’s a SteelSeries-branded keyboard, and has a different feel to the average chiclet keyboard. 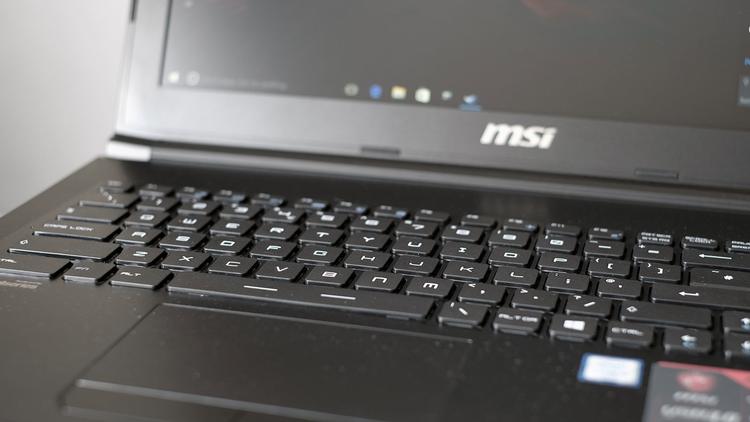 While the key travel is standard, the action is a little unusual. Rather than aiming for crisp feedback, the GL62’s keys are deliberately a lot softer, a bit like a shrunken version of the mechanical Cherry switch keyboards SteelSeries produces (granted, some Cherry switches are quite clicky).

It takes a little while to get used to, when the crispness of most chiclet designs is designed to make up for lesser key travel. However, the keys still feel good, and the layout is conventional. There’s no backlight, something you’ll have to pay a little more to get.

The trackpad is not as interesting. Its surface is a rather disappointing roughened plastic that doesn’t even attempt to ape the feel of more expensive laptops’ frosted glass trackpads. Its driver needs work too: multi-touch gestures stopped working during testing.

A lack of pad ambition pays off better with the keys. The MSI G62’s mouse buttons are separate and sit below the pad, a smart move for a gaming laptop.

Finally, let’s mention speaker quality. It’s not a highlight. Despite being a gaming machine the MSI GL62’s speakers are unusually weak. The sound is thin and relatively quiet, outdone even by some recent phones such as the Samsung Galaxy S7.

A laptop like this that uses dedicated GPU and an HQ-series CPU is never going to offer particularly good battery life. The MSI GL62 lasts 3 hours 55 minutes when playing back a 720p MP4 video file at 120cd/m2 brightness.

While it’s unrealistic to expect eight hours’ use out of a laptop with an HQ-series CPU, some others in this category will last perhaps 30 minutes more.