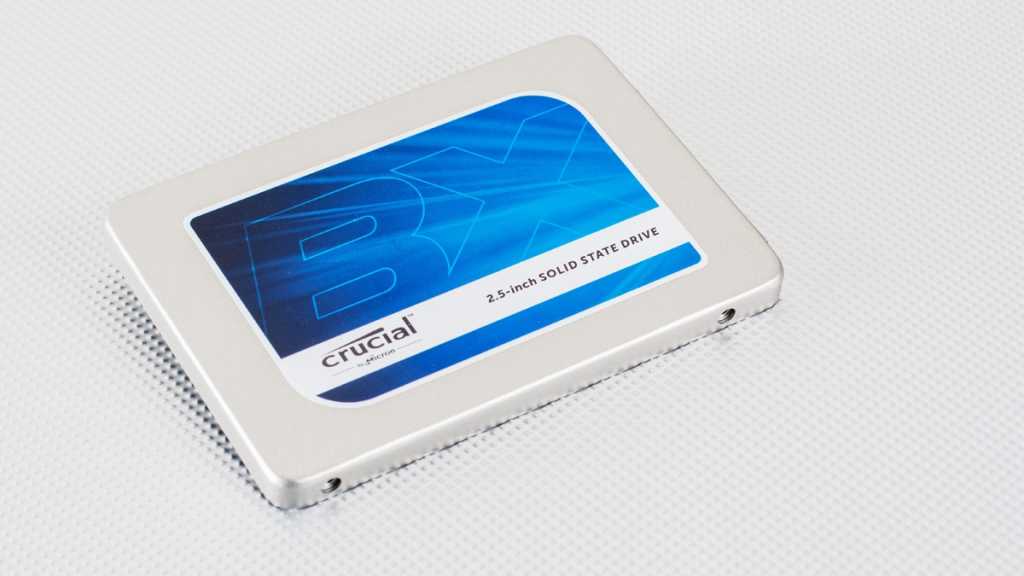 The Crucial BX200 480GB is a cheaper SSD and certainly offers an impressive step-up over traditional hard drives. However, given its cache limitations, you should think carefully about whether the saving is worth it.

The BX200 is Crucial’s first SSD to use triple-level cell flash (TLC flash), which is less expensive to produce compared to single-level cell (SLC) and multi-level cell (MLC) flash types found in other SSDs. This does make it cheaper than many of its competitors, but as you read this review, you’ll discover why it can be worth paying a little more. See also:  Best SSDs to buy in 2016.

Unlike the Kingston and Samsung 850 Evo which come with five-year warranties, the Crucial only offers three years. Read next:  Best portable hard drives 2016.

The BX200 houses not one but two drives inside. the main 480GB drive with triple level cell flash (TLC) architecture, and a fixed 6GB DRAM SLC cache. If you opt for the 240GB version you get only 3GB of cache, but 12GB with the 960GB drive.

TLC is the cheapest type of SSD tech, and this is a particularly slow drive. TLC flash works by storing three bits of data in each flash cell. Single-level cell (SLC) and multi-level cell (MLC) types house one and two bits of data per cell, and these are more expensive to manufacture. The DRAM cache in the PNY is used to speed up the drive, and the data is then written at a slower pace to the main 480GB drive. The drive connects via a SATA III 6GB/s interface.

When transferring large files – i.e. files larger than the cache – the PNY struggles. Fortunately, such huge files are rare, so the chances are that you’ll never come across this limitation.

TLC is attributed to slower performance, a shorter life-span (potentially explaining the shorter warranty period) and overall reliability. Unfortunately, we cannot test longevity or reliability, but we can of course test performance.

The BX200 doesn’t support any hardware encryption – so for those who need it, the BX200 won’t be a natural first choice, whereas its sibling the Crucial MX200 might be.

Laptop users might be interested to know that the quoted power consumption of the SSD whilst in use is 4.2W and 0.15W whilst idle.

As mentioned above, we found the Crucial to slow when copying files larger than the cache. We copied two files separately – a 6.5GB and 13GB file – from the Samsung 850 EVO SSD and found that – unsurprisingly – it slowed right down when the cache was full.

Above you can see the graph when copying the 6.5GB file, but with a 13GB file, the bottleneck is clear to see. You’re unlikely to regularly transfer files of this size, of course, but it’s something to bear in mind.

For the section below we used CrystalDiskMark and  AS SSD benchmark to analyse the BX200’s performance.

We found the results to be a mixed bag, where the BX200 would compete well with other SSDs, such as in the CDM Sequential Read Q32T1, and yet fall short in its Random Read 4KB scores. These two benchmarks test two different aspects of an SSD, but we found the same inconsistencies with its Random Write 4KB results.

These inconsistent results were maintained through the CDM 0 Fill benchmarks, with the BX200 doing well in certain areas, but falling short in others. On the plus side, it consistently does better than our Seagate 7200rpm hard drive, but that is to be expected when comparing an SSD to a hard drive.

The performance differences were also seen in the CDM Random 4Kb Q32T1 tests, with the BX200 scoring 302.7/289.6MB/s read/write speeds, versus the dismal 1.9/1.6MB/s speeds found on the Seagate hard drive.

Through AS SSD we were also able to test its ability to handle compression, where we found the BX200 to perform adequately, whilst having a slightly jagged read/write performance. In comparison to its competitors, we found the Crucial to perform a little below average.

We were impressed by the BX200’s ability to handle a game copy simulation, since it outperformed other SSDs. For once, we found the BX200 to perform consistently:

The BX200 is cheaper than its competitors, but the somewhat inconsistent performance and the niggling cache limit mean it isn’t necessarily the bargain it appears to be.

However, if you’re not going to be transferring huge files and you are on a very tight budget, the Crucial BX200 offers decent real-world performance, and is still a great step up from a mechanical hard drive.