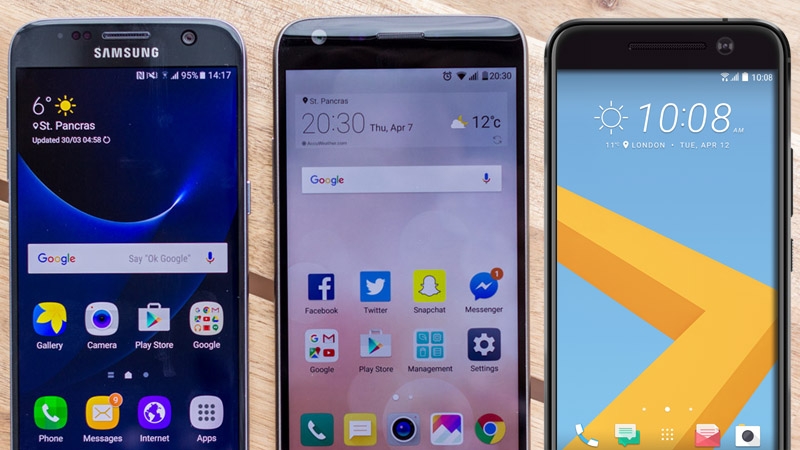 We won’t give our final verdict until we’ve thoroughly tested the HTC 10. However, it’s clear each phone has its advantages. You might like the LG G5, with its modular design, generous display size and removable battery. Alternatively, the more compact Galaxy S7 is fastest of the lot, with extras such as waterproofing, fast wireless charging, a heart-rate sensor and more common Micro-USB port. But don’t write off HTC: while the One M9 was mildly disappointing, the company has really pulled up its socks with the HTC 10, which is now a true rival to Samsung and LG and may just win you over with its fantastic design, awesome selfies and Hi-Res audio.

Samsung, LG and HTC have each now unveiled their flagship Android phones for 2016, and it looks to be a closer-fought battle than ever before as to which phone comes out on top. In this article we explain the main differences between each phone. HTC 10 vs Samsung Galaxy S7 vs LG G5. Also see our full Samsung Galaxy S7 review, LG G5 review, and HTC 10 hands-on review.

Three gorgeous Android phones, the HTC 10, Samsung Galaxy S7 and LG G5 couldn’t look more different. While the Galaxy S7 is a sleek combination of metal and glass front and rear, the HTC 10 is a unibody two-tone metal device. The LG G5 stands apart with its modular design, allowing you to bolt on ‘LG Friends’, which are optional accessories such as a 360 camera and B&O DAC. Oh, and it means you can access the battery, which isn’t possible with either the S7 or HTC 10. Also see: HTC 10 UK release date, price, specification, new features and photos.

Of the trio the Galaxy S7 is both the smallest and lightest, but not quite the slimmest – that accolade goes to the 7.7mm LG G5. In truth, though, there’s very little difference, with just 7mm and 9g separating LG, Samsung and HTC.

All three are fitted with Quad-HD screens, which mean they are incredibly crisp and clear. The Samsung is clearest of all with its 577ppi pixel pitch, thanks to its 5.1in screen, but we can’t believe anyone would be able to tell the difference between this and the 5.2in, 564ppi HTC 10 or 5.3in, 554ppi LG G5. Also see: Best smartphones 2016.

What may be more obvious is the screen panel technology each phone uses. HTC fits a Super LCD 5 panel, which tend to be very bright and easily visible in sunlight, but contrast can be reduced. That’s not an issue for the Super AMOLED tech favoured by Samsung, which omits a backlight and thus has very deep blacks, along with extremely rich, saturated colours. IPS technology, as seen in the LG G5, is by comparison much more realistic in terms of its colour palette, yet it can place a heavier burden on battery life.

Samsung and LG have both opted to implement an always-on display, which allows you to check the time, date and other useful information at a glance without activating the screen. Samsung’s version is more customisable, while LG’s shows more notifications. However, we don’t think either has got the balance just right, and we don’t blame HTC for leaving it out for this generation.

The HTC 10’s familiar BoomSound front-facing speakers are no longer visible from the front, but it still has the best audio system of any phone here on paper, with the HTC BoomSound H-Fi Edition, Dolby Audio and Hi-Res Audio support. You also get a pair of Hi-Res earphones in the box.

If you need a waterproof phone, your only choice in this group is the Galaxy S7 with its IP68 rating. It’s also the only phone to feature a heart-rate sensor, while the LG is the only one not to have removed its IR blaster for its 2016 flagship. All three phones feature a fingerprint scanner – the LG’s at the back and the HTC and Samsung’s built into the Home button. Also see: Best Android phones 2016.

While HTC and LG both fit the latest Qualcomm Snapdragon 820 processor, a 64-bit quad-core chip that’s paired with Adreno 530 graphics and 4GB of RAM, Samsung has opted for its own Exynos 8890 octa-core chip with the Mali-T880 MP12 GPU.

In our benchmarks the Samsung’s Exynos chip was faster than the LG’s Snapdragon. We have yet to benchmark the HTC, but expect that its slightly higher-clocked processor and smaller screen would give it a lead on the LG in performance, putting it in second place behind the Samsung.

It’s worth pointing out that all three phones are capable of fantastic performance, and you should not let a small difference in benchmarks heavily influence your buying decision. And, in any case, what’s more important than what a phone is capable of is what it feels like in use, and we can’t wait to try HTC’s new Freestyle Layout and find out whether there’s any truth in its claims that apps launch twice as fast.

In terms of battery performance the trio should be fairly on par with each other. The LG is the only phone here to let you swap out its battery for a spare, and it supports the latest fast-charging technology, Qualcomm Quick Charge 3.0. HTC also specifies QC3, which it combines with its own rapid-charging tech to allow you to get 50 percent charge in just half an hour.

It’s worth pointing out that the Galaxy S7 also sticks with the older Micro-USB connection for charging and data transfer, unlike the LG and HTC which both specify the newer and reversible USB-C. Which format appeals to you will be a personal choice: on the one hand you probably own dozens of Micro-USB cables and accessories, and on the other USB-C is convenient in that it works either way around and is futureproof. See all Android phone reviews.

As phones drastically improve with each new generation, it becomes more difficult to differentiate between them. One key area in which smartphones can do their own thing is photography. Unfortunately, looking at the specifications alone can’t help you here – you really need to see how they fare in the real world. As soon as we have the HTC in our lab we will update our best phone camera 2016 group test.

At a glance you might think the LG G5 has the best camera. Not only can you bolt on additional camera hardware, but what it’s got onboard looks to be pretty good. It has an 8Mp selfie camera where HTC and Samsung specify only 5Mp (although HTC’s is the only one to feature optical image stabilisation). And whereas those two rivals feature 12Mp primary cameras, the LG G5 has a 16Mp camera AND an 8Mp wide-angle camera.

Don’t let the numbers do the talking for you, though: if photography is important, wait until you can see just how good the camera is before you make up your mind.