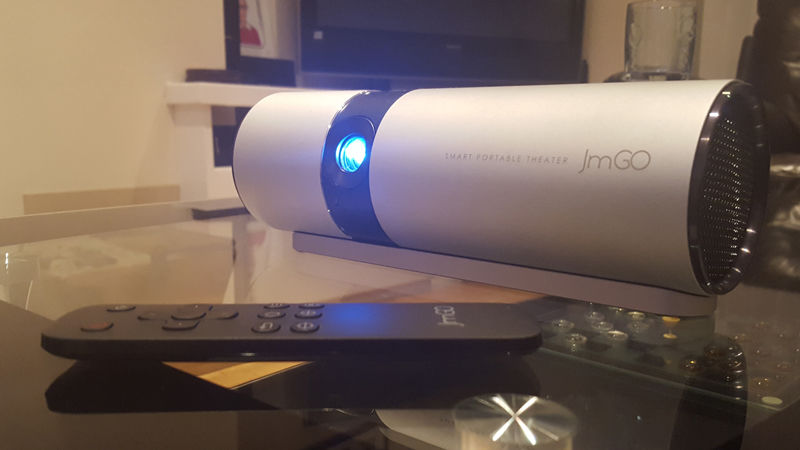 The JmGo View is expensive, but it’s a brilliant idea and incredibly well designed. This is tech you would show off in your home or office, but freed up to show off in anyone’s home or office and anywhere else you might go. Battery life is on the short side for movie nights, and at times you might find the mouse-less remote unable to navigate certain apps, but this portable projector is otherwise an awesome gadget.

We’re big fans of JmGo’s G1 Smart Home Theater, a gorgeous home projector that’s oozing with style and functionality, so we couldn’t wait to get our hands on JmGo’s latest project: the View. JmGo View is a smart portable DLP projector that has everything you need to project presentations, movies, games and more from absolutely anywhere you like, and it looks great. Also see: The best and coolest gadgets coming your way in 2016

The JmGo View is an Indiegogo project, and with only two days until the campaign finishes it has smashed its $100K goal. At the time of writing the Indiegogo fund was at $248,950, and JmGo promises that if it reaches $300K it will up the View’s warranty from one year to 1.5 years. At $450K it will produce a new colour option, and at $700K it will increase the device’s onboard storage to 32GB (up from 16GB).

The View is entering mass production this month and will ship in May 2016.

Like the G1, the View is an exceptionally well-designed DLP projector. JmGo has turned projector design on its head, and rather than a drab, functional-looking device the View is an aluminium-alloy cylinder with a stylish satin finish. It’s been built to the highest standard and is oozing with quality, justifying every penny of that extravagant price tag.

Measuring 229.6×72.4mm the View is not much bigger than a drinks bottle, and it’s light enough to throw in a bag at just 1kg. A magnetic stand is supplied in the box that can protect the lens in transit, and JmGo couldn’t have done a better job in designing this accessory. Reasonably weighty the magnetic stand holds the View firmly in place on a flat surface, where its cylindrical groove is perfectly paired to the projector, allowing you to position it at any angle you wish – and it will stay there.

Bundled with the View is a small black remote control. It’s not as intriguing as the cylindrical remote supplied with the G1, but we’re thankful for this. Not only is that controller more design-conscious than it is user-friendly, it isn’t always responsive. The new remote lets you change the volume, navigate menus, return to the home screen, mute the sound, turn on- or off the device, and re-focus the projector – all with ease. Alternatively you can install an Android app on your phone that does much the same thing (an iOS app is coming soon).

The View has a built-in 15,600mAh battery, which lets you project images in previously impossible places – such as in a tent, a client’s kitchen or a friend’s living room. Battery life very much depends on how you use the device; in our tests we got just a few minutes over two hours, but less intensive usage should improve things. JmGo says you’ll get in excess of three hours with standard usage, five hours in power-saving mode, and eight hours for music playback.

We’d love to see the View charge over a more common connection such as Micro-USB, which would also allow you to charge it from a power bank rather than a mains adaptor on the go, but if it can get through 15,600mAh of power in two hours it simply wouldn’t be able to do so fast enough. Still, two hours should be enough for most presentations, and if you’re at a friends you can likely use their mains power.

When you’re not using the View as a projector it can be turned into a Bluetooth speaker, and a 4W speaker with Dolby Digital Plus is situated at either end of the device behind a black grille. The G1 has four 5W speakers for even more immersive sound, but we were impressed by the sound quality and the volume the View was capable of, and it’s more than ample for home movie nights, office presentations and in drowning out any noise created by the JmGo itself. See all projector reviews.

Setting up the JmGo View couldn’t be easier. You press the On/Off switch on the rear, connect to Wi-Fi (there’s no ethernet port on this portable device), then use the supplied remote to navigate to Settings, Graphic. The View supports vertical +/-40 degrees keystone correction and electromotion focusing: you simply tap one of two buttons on the remote to focus the screen, and correct the keystone to square the display.

Other options in the Graphic menu are brightness and aspect ratio controls, plus the ability to toggle on ceiling- or rear projection mode (perhaps not so useful in a portable projector). The View supports an HD (1080×720) image with a projection size of between 10- and 80 inches and an aspect ratio of 16:9 or 4:3. Rated at 250 lumens the View is reasonably bright for a portable projector, but you’ll still want to turn off the lights and close the curtains for best results.

A standout feature of this mini projector is that it can also display 3D content when paired with active-shutter glasses (although confusingly the option to activate 3D is not in the Graphic menu). The idea of being able to stream movies to a screen up to 180in in size is likely to appeal to many customers, but to also have images pop out the display will completely change the home movie-viewing experience.

JmGo View review: In use

The View is reasonably pricey for a smart projector, but it’s incredibly well featured. In common with the JmGo G1, this projector runs on a customised version of Android 4.4.4 KitKat with full Google Play support, which means you can install Android apps for streaming services such as YouTube and Netflix, plus browse the web and social media.

You’ll be prompted to log into your Google account when you first launch the Play Store, which we found kept crashing until we updated Google Play Services (we were also plagued with Wi-Fi dropouts until everything had been successfully updated). You can then install apps directly from the Play store or tap on the shortcuts to apps such as Netflix, Facebook, Twitter and YouTube. We were surprised to find no web browser was installed by default, but you have plenty to choose from in Google Play – we downloaded Chrome.

Lots of apps are available, but not everything will be compatible with the View. For example, we were unable to install the Geekbench 3.0 benchmarking app on the View, although both AnTuTu and GFXBench were installed successfully.

In many cases the supplied remote control is easily capable of navigating apps, but unlike the G1’s there is no mouse function – at times you might prefer to attach a mouse to the projector’s USB port. When using the remote control’s directional keys to navigate the user interface we found the whole display would jump in that direction, which took a little while to get used to.

We expected to find the same UI as on the JmGo G1, but this is a far more basic, user-friendly affair. On the home screen are options for signal source, wireless, settings and power options, and you simply tap the down key on the remote to access apps. The first option here takes you to a ‘Media Center’ but in essence file browser for managing the device’s internal storage.

In the Settings menu you’ll find options for altering the screen and sound, plus changing the language, time and such forth. There’s also an optimise feature, which cleans system memory, the app cache and unwanted installation packages, for what use it’s worth.

At the rear of the device are HDMI 1.4a and USB 2.0 ports, enabling you to plug in anything from a TV tuner to a USB mouse or hard drive. Compatible media formats include AVI, MPG, DAT, VOB, DIV, MOV, MKV, RM, RMVB, MP4, MJPEG, TS, TRP, WMV, ASF, FLV.

The View made a great job streaming Netflix and YouTube videos, but its performance in AnTuTu (13,206) and GFXBench T-Rex (6.5fps) suggest the only gaming that will take place on this Android box will use the View merely as a display. Screen mirroring of Android and iOS devices is supported via Miracast and HapyCast (like AirPlay), and the HDMI port could easily be used to plug in a PlayStation or Xbox.