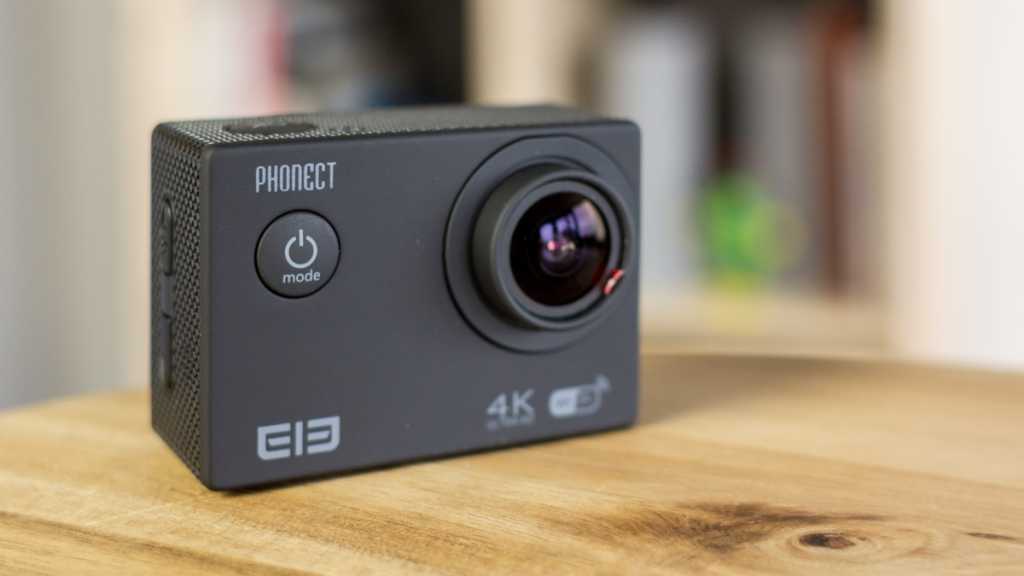 As long as you buy it with the knowledge that it isn’t ‘true’ 4K, the audio recording is quite poor and it is primarily an action cam rather than a dash cam, you won’t be disappointed. If you’re mainly concerned about getting 60fps full HD video, the quality on offer here – considering the price – is very good and thanks to the long-lasting battery, it’s great value.

There are some companies that become synonyms for product categories: Hoover, Fitbit and GoPro to name but three. GoPro is certainly the best-known and most successful action cam maker, but there are plenty of cheaper options, even if most of them are rip-offs of GoPro’s design.

The Elephone Explorer – sold by and supplied to us by Phonect – is one such clone and at a glance is very similar a GoPro Hero 3 or 4.

It costs £68.99 from Phonect on Amazon and that includes a 16GB microSD card. You can opt to buy it without one but you’ll save only £2. Alternatively, you can have a 32GB card included for £76.99. The camera supports cards up to 64GB in capacity. 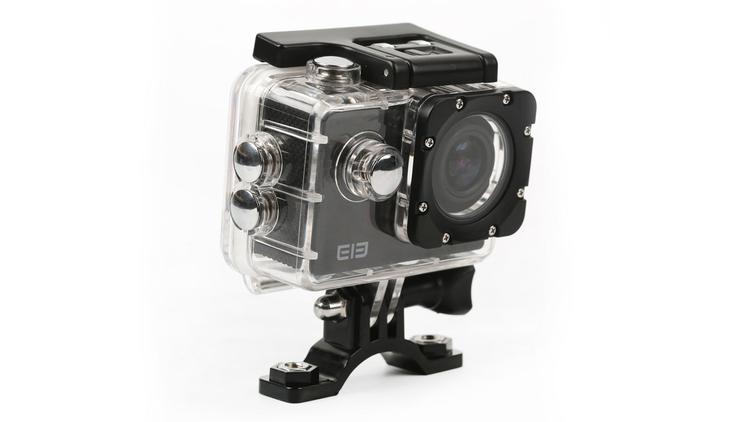 This makes the Explorer one of the cheaper action cams we’ve tested, being some £33 cheaper than the SJCAM SJ5000X Elite (although we’ve seen that for sale as low as £84 since our review in February when it cost £100).

It’s significantly cheaper than a real GoPro, with a Hero4 Silver costing over £300, and a Hero3 at around £149 these days. (See also our Hero4 Black review.)

Unusually for a retailer, Phonect actually brands the camera with its logo, and also handles the 15-month warranty. Although Elephone makes the camera in various colours, it comes only in black from Phonect.

It certainly appears to be a bargain. It has built-in Wi-Fi, a 2in colour screen (320×240 pixels), and supports 4K video recording. 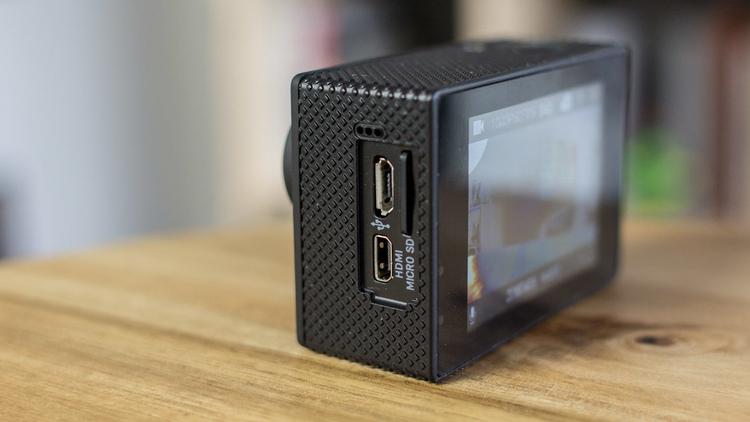 However, look a little closer and you’ll see that the latter specification is simply there to tick a box. In reality, the mode is unusable for action: it records 3840×2160 at only at 15 frames per second. That’s cheating in our book as you need a minimum of 25fps for smooth video (the SJ5000X Elite cheats by interpolating and not actually recording at 4K, even if it does it at 24fps).

Elephone’s website doesn’t specify which sensor is used in the Explorer, but there’s a good chance there’s some interpolation going on. Phonect and other retailers quote a 16Mp OV4689 sensor, but this is actually a 4Mp chip – half the resolution needed for true 4K.

The good news is that it records 1080p at 60fps which is better than a Hero3. Only the Hero3+ matches this mode and that costs around £200 now.

The Explorer also has other shooting modes, such as looped recording which means you can use it as a dash cam where it will create a new video file automatically every 2, 3 or 5 minutes. (See our roundup of the best dash cams.)

In the box you get the usual selection of mounts and accessories: a helmet mount, adhesive mounts, a tripod mount, a handlebar mount, straight and 90-degree adaptors, and both waterproof and non-waterproof housings. They’re all GoPro compatible, so if you need something like a suction mount to hang it from your windscreen it’s easy to find one on ebay or Amazon. Quality is a good step down from what you’ll get with genuine GoPro mounts – a couple of the extensions had such poorly made nuts that we couldn’t tighten them up: the thread wasn’t properly cut. 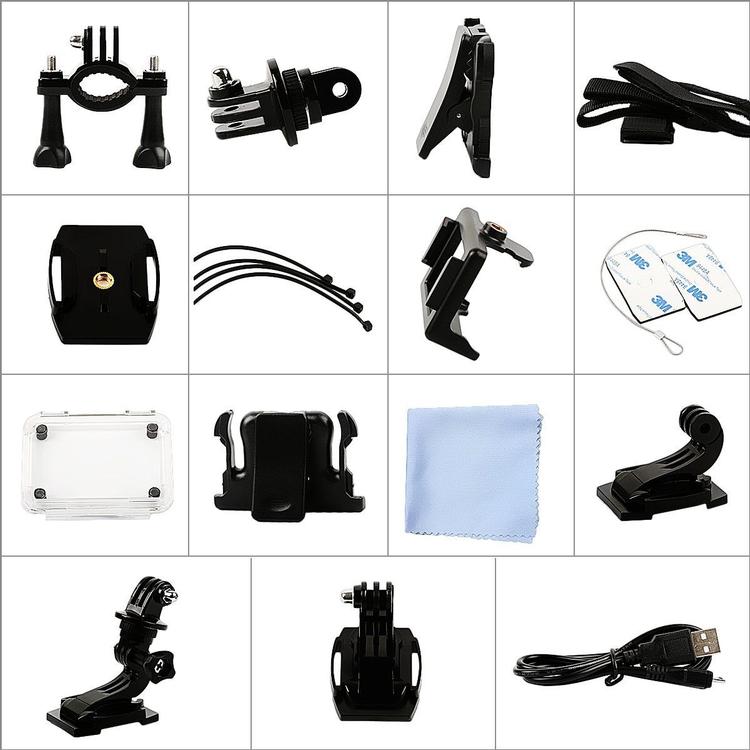 In terms of design, the Elephone Explorer follows GoPro’s lead and has roughly the same dimensions: 59x41x30mm. Don’t assume it will fit into GoPro housings, though. There’s an extra millimetre here or there and different button locations. 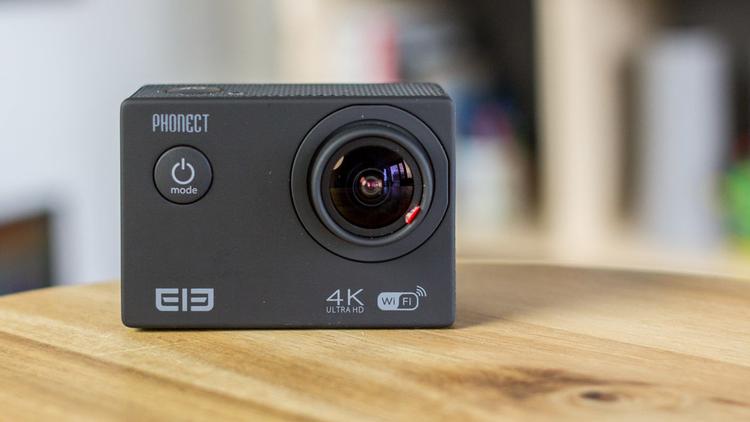 If anything, the Explorer is an SJCAM clone: it has the same arrangement of micro USB, micro HDMI and microSD on one side and two buttons on the other side (SJCAMs usually have three). Even the batteries are interchangeable between the two manufacturers. The buttons on the side act as up-down buttons in the menus, and double as Wi-Fi on/off and sound on/off.

The latter is problematic, as it’s all too easy to press the button when holding the camera to record (even in the waterproof case) and mute the microphone. An on-screen icon shows whether the mic is muted or not, but it’s easy to miss and we ended up with several silent videos. We’d like a menu option to disable this function.

On the front you’ll find a power/mode button but no LED indicators. This could be to avoid glare being recorded through the lens – especially at night – but it means you can’t immediately see if it’s recording or not from the front. In fact, the only indication that it’s recording is a tiny flashing blue LED on the back – it would be far better to have large LEDs on all sides as GoPro does (and the option to disable one or all of them).

Another issue is the lack of audio feedback, something that’s key when you can’t see the camera at all (such as when it’s stuck on your head). You can enable a click sound, but it’s the same for starting and stopping recording and, regardless, you can’t hear it when it’s inside the waterproof case. Certainly something that needs to be addressed in a firmware update.

Menus are sensibly arranged and are easy to navigate. There aren’t too many options, and you can also download the ELE CAM app for iOS or Android which makes it very easy to see and change settings. 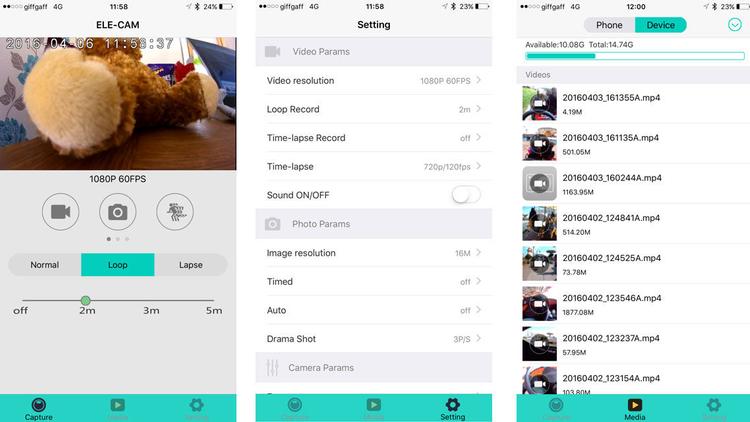 The app also gives you a remote live feed from the camera and allows you to start and stop recording, change modes and review footage. In our testing of the iOS app we experienced frequent crashes and the remote viewing – at least of the 1080p60 footage we shot – simply didn’t work. It would play a second or two and then buffer. Files over 200MB wouldn’t play at all.

If you’re considering the Explorer because you want both an action cam and dash cam in one, then note that there’s no GPS or G-sensor and – as of the current firmware – no option to automatically start recording when it receives power over USB. You can enable a date/time stamp on the video, but the SJ5000X is a better choice for a dash cam overall.

The on-screen display is decent, showing the current mode, remaining storage space, time, date and whether loop recording is on or not. 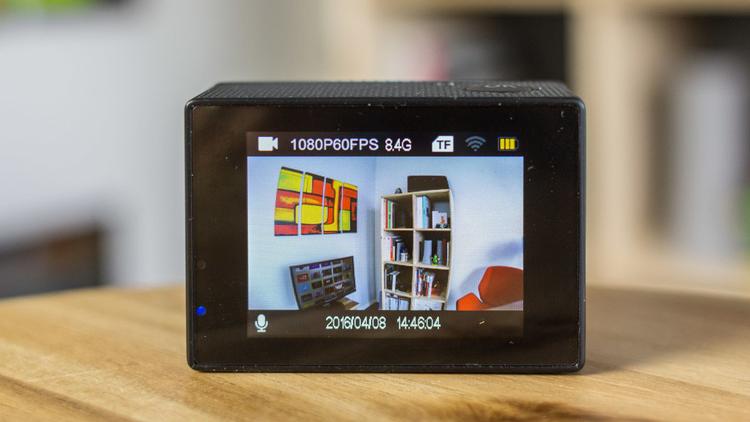 Unlike other action cams, the Elephone doesn’t let you change the field of view. Regardless of your chosen video or photo resolution, you’re stuck with a super-wide 170 degrees. That will be fine for most people, as it captures a view closest to human vision. However, it does mean fisheye-style distortion to the image, something which is less prominent when you reduce the field of view – a setting you’ll find on GoPros and the SJCAMs.

Image quality, though, is very good. It’s sharp and colours are realistic. At the 1080p60 setting, which is likely to be first choice for many users, you get smooth footage with good detail thanks to the fact it’s recorded at just over 30Mb/sec. This means action footage looks better quality than cameras which record at lower bitrates.

Here’s a 1080p60 clip shot with the camera mounted on a bike. You can immediately see the lack of stabilisation – footage is smoother when used in a car.

This clip shows the extreme change in frame rate when you hike the resolution up to 4K. Bear in mind our video player compresses the video, so quality is actually considerably better than you can see here:

Here’s a crop of a screengrab from the video above. The 4K video mode may well be interpolated from a lower resolution, but you do get more detail than in the 1080p mode, so despite the low frame rate, it could be a good option for in-car use as you’re more likely to be able to read a registration plate in this mode. 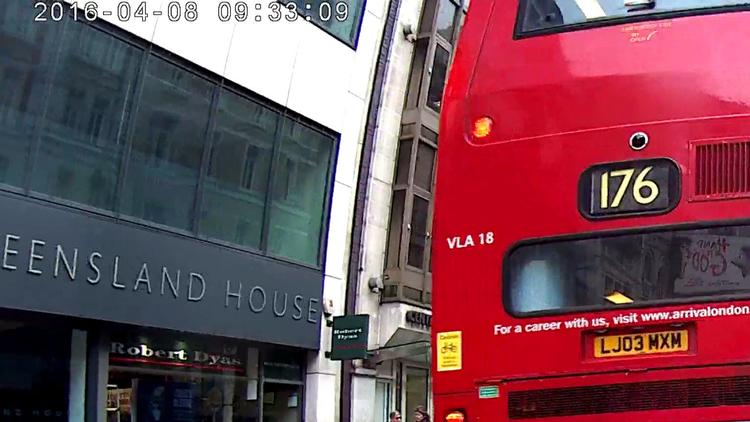 The bad news is that audio recording is dismal. It’s recorded in mono at 16Kb/sec at 8kHz, so it’s no wonder that it sounds muffled and poor quality even when you’re not using the sealed housing. When you do use the housing, forget about hearing people’s voices clearly.

Unfortunately, this lack of attention to audio quality is a relatively common trait among action cameras – manufacturers seem to think that people don’t care about audio quality. They’re wrong, of course. Plus, most smartphones are capable of better audio recording.

Battery life is pretty good. It uses the same type of battery as SJCAM, but packs in 1050mAh rather than 900mAh (which you get with the SJ5000X). We found it lasted over an hour at 1080p60, and you might even get two hours if the temperature is perfect and you’re recording at a lower frame rate or resolution.

Bear in mind that photos are interpolated, so while you might think you’re taking 16Mp images, the sensor has only a quarter of the necessary pixels.