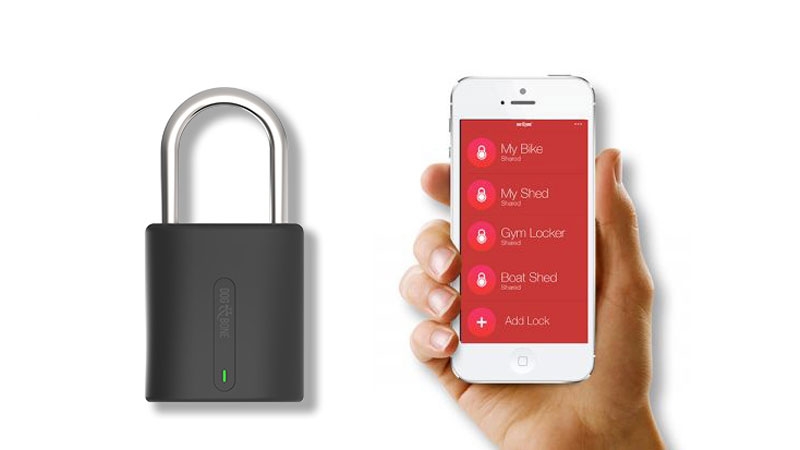 The Dog and Bone Locksmart Mini is a great all-around smart Bluetooth padlock, offering the ability to share access with anybody at any time without the need for keys or a PIN code. The advanced encryption gives us confidence that the Bluetooth smart padlock won’t be hacked, and the combination of a die-cast zinc alloy body and 7mm hardened steel shackle should protect against ‘traditional’ break-ins. With easy setup, a two-year battery life, weatherproofing abilities and a price tag cheaper than the competition, we’re pretty impressed by the Locksmart Mini.

It seems like lately, our smartphones can be used for almost anything – we can pay for items in shops, control our lights (and even heating systems) as well as make and receive calls, of course. With electrical components getting smaller and smaller, it was only a matter of time before smart Bluetooth padlocks became a ‘thing’. Enter the Dog & Bone Locksmart Mini, a smart Bluetooth padlock available to buy right now in the UK. Here, we discuss its design, build, features and UK pricing. Read next: How to make your home a smart home

Before we jump into how the Locksmart Mini works, let’s first discuss its design because after all, it still needs to function as a lock. Though the Locksmart Mini is packed full of smart tech, it’s all fit into a die cast Zamak-3 zinc alloy body that the company claims is extremely durable without adding much weight to the lock, and boasts a hardened steel 7mm shackle. While we’re not claiming to be experts in lock security, the lock feels solid and secure and we wouldn’t have any worries using this to lock up our bike, lock the shed, etc.

To help protect the Locksmart Mini, it has been cased in (what feels like) rubber to add an extra layer of durability to the lock while helping to improve its weatherproofing capabilities. Yes, we said weatherproofing – unlike other smart Bluetooth locks on the market, the Locksmart Mini can be used both indoors and outdoors, and should survive a stint in the rain, hail, snow and sun in temperatures ranging from -20 to +70 degrees Celsius. This is made possible by a flap at the bottom of the lock that protects the micro USB port from any moisture, and it’s important that this is sealed when the lock is in use.

Apart from an LED indicator that shows when the Locksmart Mini is powered on, the lock is pretty nondescript – although this is far from a bad point. You don’t want all the bells and whistles like LED lights and on a smart padlock because, to us at least, that’d suggest you’re protecting something valuable and no matter how good a lock may be, we don’t want to tempt fate! It’s understated, but should do the job well.

The Locksmart Mini Bluetooth padlock looks to simplify your security needs by providing wireless access to the lock via Bluetooth, negating the need to keep track of keys or a pin to unlock it. While this may be a great solution, consumers, in general, are still worried about the Bluetooth connection being hacked, providing thieves with an even easier way to steal valuable possessions. While we can’t speak on behalf of all Bluetooth locks, the Locksmart Mini features 128bit Bluetooth encryption standard which the company claims is the highest level of protection available.

That means that unless you share access with anybody else, your valuables should stay locked up. Those still worried can set up additional security measures via the Locksmart app for iOS and Android including password protection and even Touch ID protection for iOS users. Unlocking the padlock is fairly straightforward too – users first need to ensure Bluetooth is active on your smartphone, then all you need to do is open the Locksmart app, press the button on the bottom of the padlock to connect it and tap the icon on-screen to unlock it. If successful, the lock should automatically pop open. 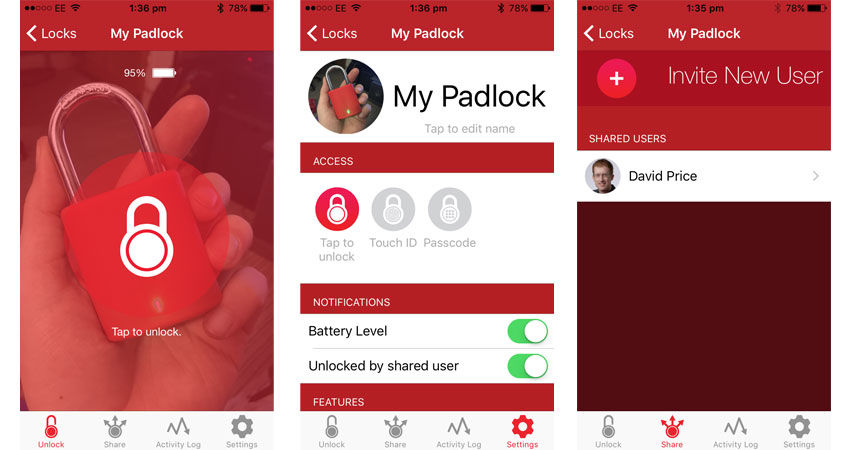 We mentioned shared access above, and it’s a big feature of the Locksmart Mini. Why? Because it makes sharing padlocks a lot easier, and it also means you won’t have to give everybody a physical key. In fact, you can grant access to your padlock from anywhere in the world, and can retract it just as easily. Simply invite a shared user from within the app and they’ll receive a text message with a URL explaining how to pair with the lock. The new user simply needs to download the app, create an account and click the link on the web page to gain access to the padlock.

Once users have access to your padlock, you can track exactly who and when accesses it via the smartphone app. This is ideal as it allows users to keep track of exactly who has accessed the lock, an important piece of information if anything was to be stolen/broken/etc. It’s just as easy to remove them too – under the shared users pane of the app, simply tap on the name of the person you want to remove and tap ‘Remove access’.

Of course, Bluetooth connectivity requires some level of power which is supplied via a built-in lithium-ion battery, which is charged via a micro USB. While the lock itself doesn’t take very long to charge, it can last up to two years (or around 3,000 unlocks) on a single charge – pretty impressive considering the average battery life for a Bluetooth lock at the moment is between six months and a year. While we obviously can’t put this to the test, we’ve had the Bluetooth padlock for around three weeks and it has only dropped by four percent, and that’s with constant use (us showing everybody how cool Bluetooth padlocks are, obviously!). 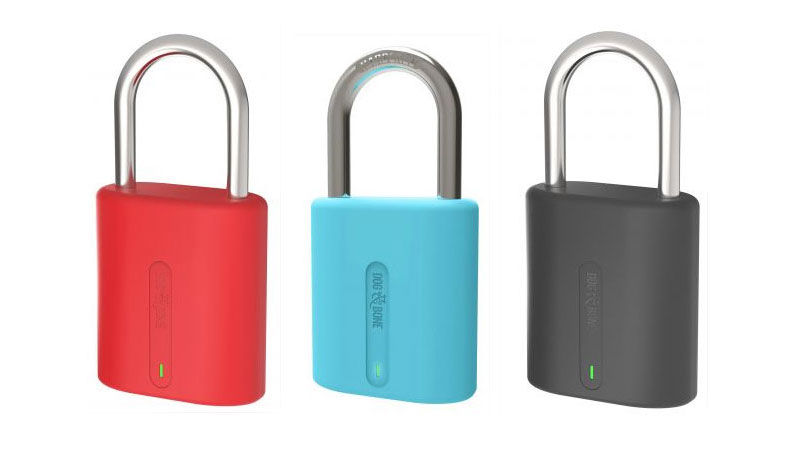 So, where can you get your hands on a Dog & Bone Locksmart Mini Bluetooth padlock? The good news is that it’s available to buy in the UK right now directly from the manufacturer, and will set you back £49.24 plus postage and packaging. Why is that good news? Because at just under £50, it makes the Locksmart Mini one of the cheaper Bluetooth smart locks available in the UK, especially with weatherproofing capabilities.

To put this into some perspective, the Noke (which we’ve  also reviewed) costs between £10-20 more than the Locksmart Mini and doesn’t offer outdoor use. It’s also available in three colours (black, red and blue) offering a choice of styles for consumers.