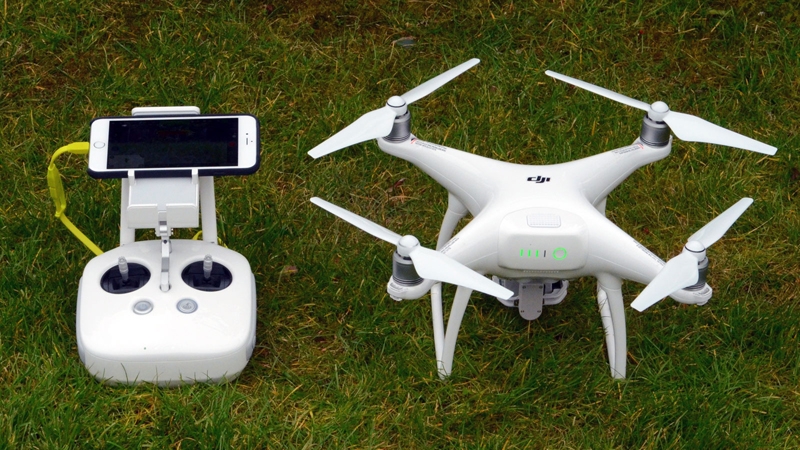 The Phantom 4 is unquestionably DJI’s best drone yet. It shoots decent quality 4K video and is easier to control than ever before. Batteries are very expensive, though, and the intelligent modes still don’t quite match those you’ll get with a 3DR Solo which, in our opinion, is still the better choice if you need to capture complex cinematic aerial shots. Of course, the Solo is more expensive, doesn’t come with a camera and lacks obstacle avoidance, so the Phantom 4 is still a great choice if you can afford it. Don’t forget, though, that the Phantom 3 4K can capture similar-quality video and costs only £699.

The Phantom 4 was something of a surprise, launched not even a year after the first Phantom 3 models: the Pro and Advanced. In fact, it has only been mere weeks since the Phantom 3 4K was unveiled at CES 206, but the Phantom 4 has quite a few nifty tricks up its sleeve that’ll tempt you. Also see: Drone buying buide – best drones 2016 and Best new drones coming this year.

It’s the first consumer drone which will actively avoid objects, and that’s a huge deal. With almost every other quadcopter, you’re in charge of making sure there’s nothing in the way. The Phantom 4 has five cameras which let it see what’s around it and prevent crashes by slowing to a halt, or even going over or around obstacles. 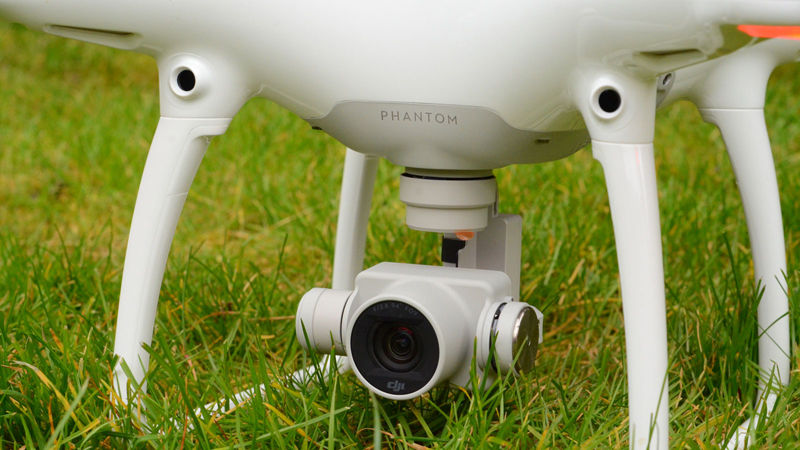 There’s but one drone in the Phantom 4 range, and it costs £1229 direct from DJI. There are no options: you get a 16GB microSD card in the box and the box itself is a handy carry case. One battery is included which lasts around 25 minutes: roughly the same flight time as previous models.

This isn’t going to be enough for most people, and extras cost a whopping £129 each from the official DJI store. Using third-party batteries isn’t recommended, and none exist yet anyway.

The quick-release props cost £14 for a set of four, but you get a spare set in the box. Also see: The UK law on flying drones explained. 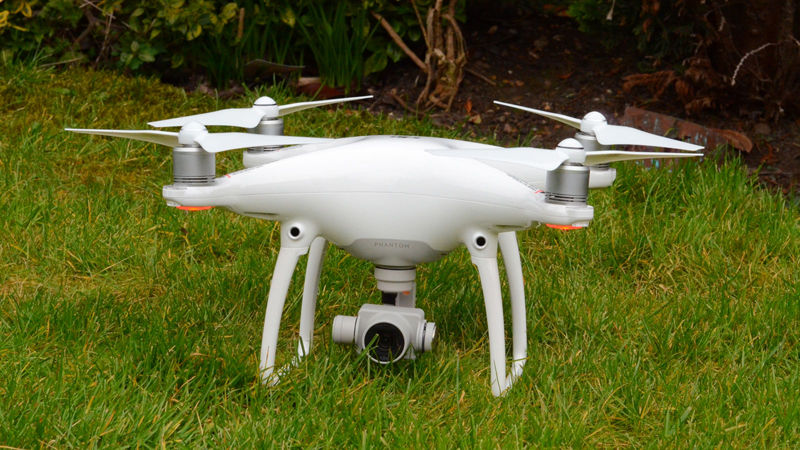 There are a couple of differences you’ll notice immediately. One is the glossy finish on the Phantom’s body which gives it more of a premium feel. The gimbal is built into the Phantom’s body, not for a sleeker look but to bring it closer to the centre of gravity.

The battery is a new design with a new connector. It can only fit into the craft one way, but the charger can be attached either way up, like a USB C cable. The charger itself has a second connector which allows it to charge the battery and the Phantom’s controller at the same time.

Another change is the push-n-twist propellers which are supremely quick to fit and remove. The quick-release mechanism is much like the Inspire 1’s and DJI says it allows the motors to spin up and down faster without the props coming loose as they would with the self-tightening type used on the Phantom 3.

Quite obviously, there are two cameras built into the front legs, which work in conjunction with the main 4K camera to look out for buildings and other objects. Two more face downward, and there are two uprated ultrasonic sensors which let you fly at up to 10m off the ground without GPS (previously the limit was 3m on the Phantom 3).

There are changes on the transmitter too. One is the sliding mode switch which includes a new Sport mode, and another is a pause button on the right shoulder which stops the drone and makes it hover – useful if you think it’s about to get into trouble. 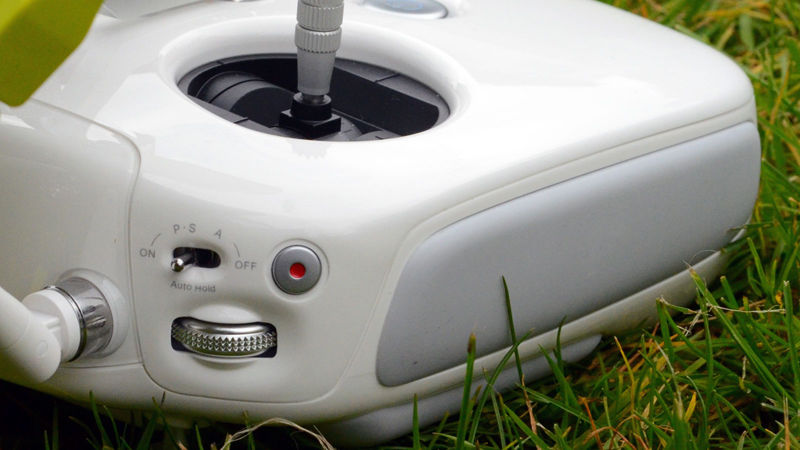 It’s otherwise identical to the Phantom 3 Pro / Advanced remote controller, with a fold-out phone/tablet holder that’s big enough for an iPad Air. Note that you can’t use an iPad older than an iPad Air as the DJI Go app is not supported on iPad 2, 3 or 4. Android is supported, but check compatibility with your device.

For those unfamiliar, the controller has a full-size USB port for connection to your phone or tablet, which leaves its Wi-Fi free for other things, such as tethering to a phone. That’s useful when you want to download map data within the app in real-time, but it is also possible to cache maps before you head out. 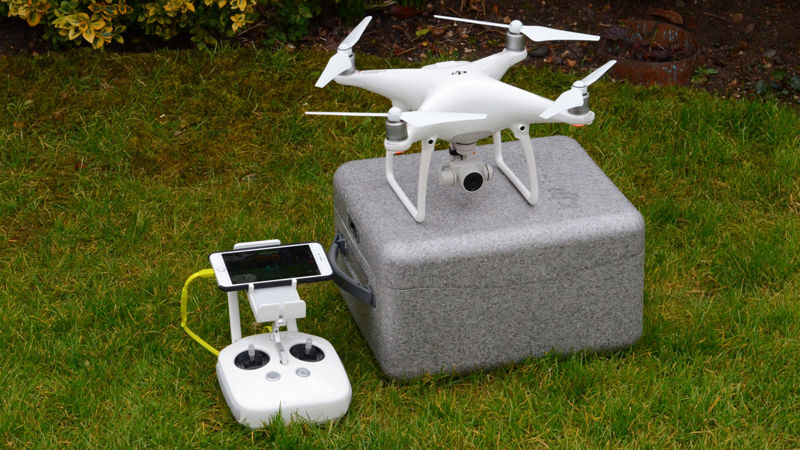 The remote has two dials, the left for gimbal control – we still feel it’s positioned too far over for a comfortable reach – and the right-hand jog dial for changing exposure settings such as shutter speed and aperture. Two buttons on the back are customisable and can be set to do things such as display the advanced camera settings. 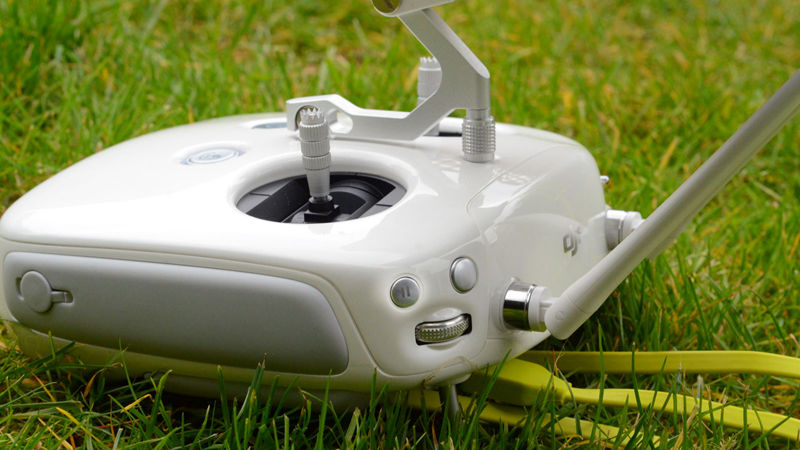 Flying the Phantom 4 is a similar experience to flying any other Phantom, but you’ve a host of extra modes at your disposal. In Sport mode you get to use the drone’s full potential, but it can be risky as it’s faster than you expect. Acceleration is amazing, and we’ve no reason to doubt the claimed 45mph maximum. Also see: How to fly a drone.

While the motors sit higher to try to avoid the propellers ever being visible in the frame, that doesn’t apply in Sport mode, especially when flying forwards where you will definitely see them. The avoidance system is disabled in this mode, which is why it’s risky to use it unless you’re sure you’re higher than any trees around you.

The default mode is P-mode – positioning. What’s odd is that the visual system isn’t enabled by default and you also have to enable the ‘go around’ and ‘go over’ modes separately. So don’t assume it will stop before hitting a wall when you first get it out of the box.

With the avoidance settings enabled, you get an automotive-style heads-up display which shows how far away are detected obstructions. It works up to 22mph, and will detect objects (which are large enough) from around 1-15m. If you continue flying towards an object, the Phantom 4 will simply come to a halt and hover in position.

If you’ve enabled the extra modes, it will attempt to fly around an object in its path, or fly up and over it – this also works when you enable the intelligent return to home function. In the few tests we tried, the system worked well, stopping short of bushes, trees, brick walls and people. However, DJI is keen to point out (even in the app) that it can’t detect thin objects such as tree branches without leaves, fences and power lines – not that you should be flying near those anyway.

It won’t stop the craft flying into glass doors or windows, either. 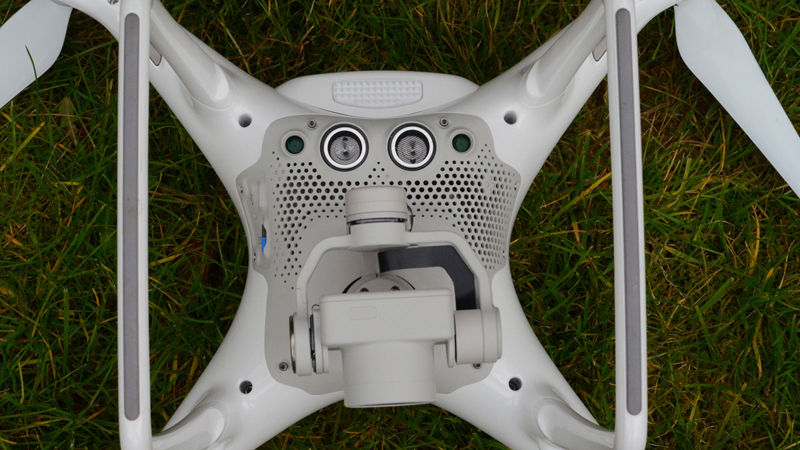 In terms of range, you can set limits in the app for height and distance, but you shouldn’t fly higher than 120m (400ft) by law, or 500m away from you with line of sight. We flew to these limits and had no issues with signal strength or the video feed becoming choppy or breaking up – it was faultless.

The intelligent flight modes are easier to use than before, but you still have to fly the Phantom over an object to set it as a point of interest. It would be far easier to tap on a map. The good news is that you have control over the radius and altitude while in POI mode, and you can also change the speed during the manoeuvre using an on-screen slider.

You can use the Follow Me feature as with the Phantom 3, but it will only follow the position of the controller and won’t train the camera on a subject. Thankfully, the new ActiveTrack mode does away with GPS following and can identify people on screen: you just tap the person to track and – once identified as a person – the Phantom 4 will keep the camera on that person and follow them. They don’t need to be holding the transmitter or a phone. Plus, the system works at only a few metres off the ground. With Follow Me, 10m is the lowest height possible.

The only issue is that the new mode couldn’t keep track of a fast-moving child, and lost its lock when she made abrupt changes in direction. It was more successful with adults, and we’re sure it’s an area DJI will improve with future updates. Also read our DJI Phantom 3 Standard and Professional reviews.

4K footage from the camera is impressive. It isn’t the last word in UHD quality, of course, but for a lightweight, small camera, it’s great. And considering that only a couple of years back, all you got for this kind of money was a 1080p camera shooting at 12Mb/s, 60Mb/s 4K is very usable indeed.

It’s sharp (but benefits from extra sharpening which can be added in the Style menu in the app) and colours are natural. Obviously it would be nice to have the option of 4K60 but that is almost unheard of in 2016. 30fps is smooth enough, but you can shoot at 1080p60 if you prefer.

If you want to get the best possible quality, check out our pro tips guide.

Note: The video below has been exported via iMovie to YouTube at 1440p. We’re in the process of adding new footage and exporting it from Final Cut at 4K, so watch this space. The section in slo-mo is included to show how bad the quality is at present.

Of course, the Phantom 3 Advanced and Pro can also shoot at 1080p60, so it’s not unique to the Phantom 4. In fact, it’s hard to say if 4K quality is better on the updated camera. There is certainly less purple fringing, and no discernible barrel distortion, something which was terrible on the Phantom 2 Vision+.

DJI says the new U-shaped gimbal which holds the camera on two sides rather than one eliminates unwnated movement, and it certainly works: leave the Phantom 4 hovering and then watch the footage – you’ll think it’s paused or not playing.

The slo-mo mode which runs at 120fps in 1080p is – unfortunately – broken. Footage is blurry and gives the impression of being standard definition. DJI is fully aware of the problem and is working on a fix. What we can say is that the video is recorded at 20Mb/s and that that the field of view is reduced to 47 degrees in this mode.

Usefully, video and photos are automatically saved to your device and you can even edit movies using an iMovie-style editor within the app. You can easily cut highlights from the original clips, change their speed, apply filters and colour correction, then add music to fill the silence (the Phantom doesn’t record audio – you’d only hear the motors and propellers).

The finished edit can be uploaded to Facebook, Twitter and various other sites, but oddly not YouTube or Vimeo. For the best quality, you’ll have to copy the video files from the SD card to your PC or Mac and use ‘proper’ editing software which won’t compress the video too much. 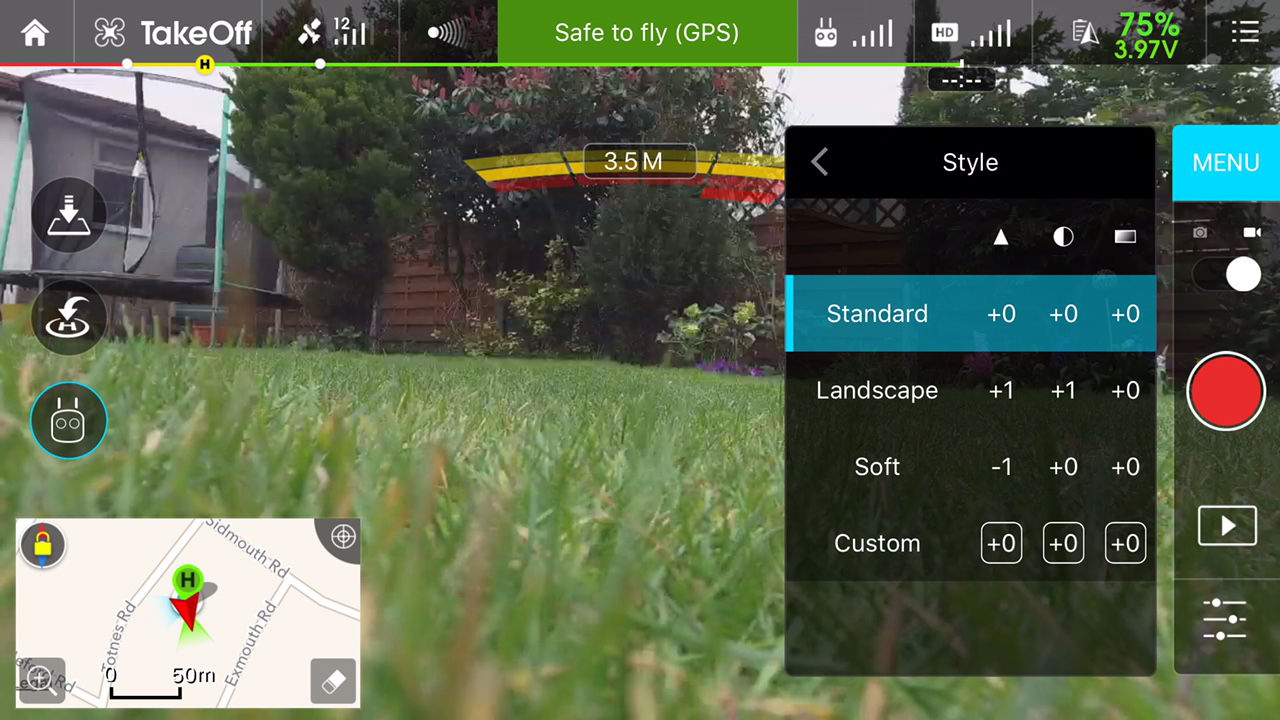 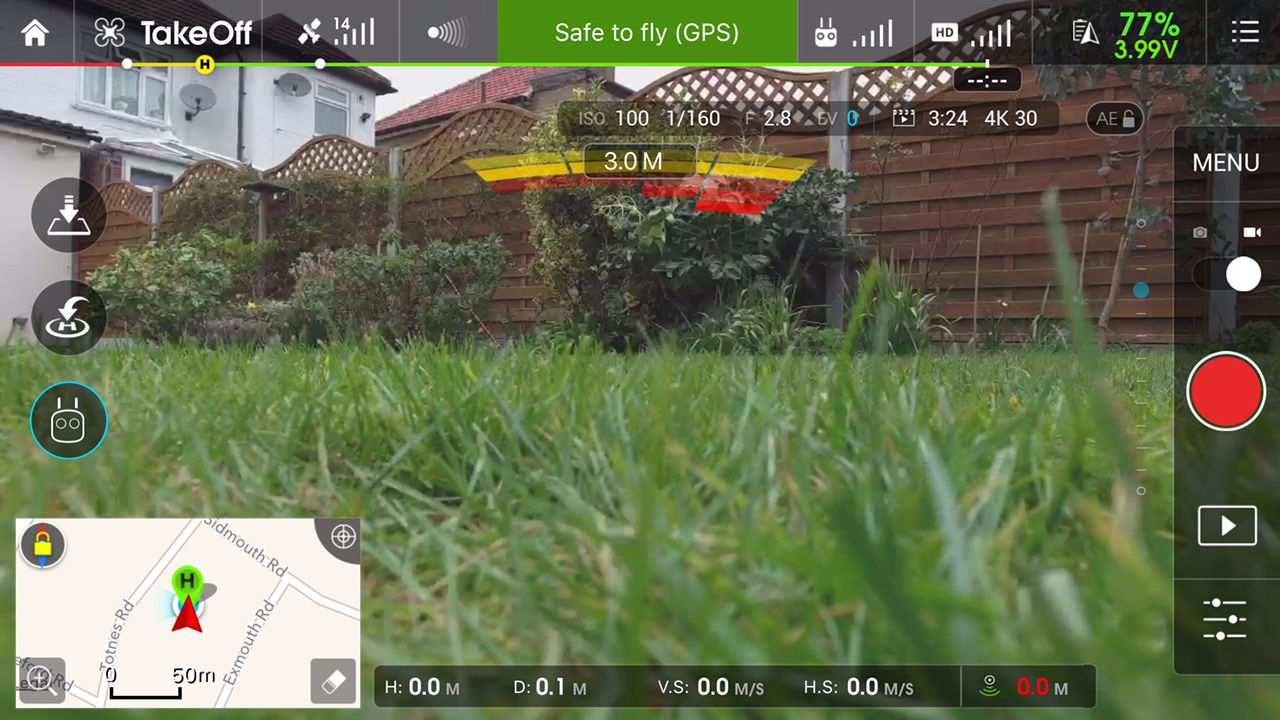 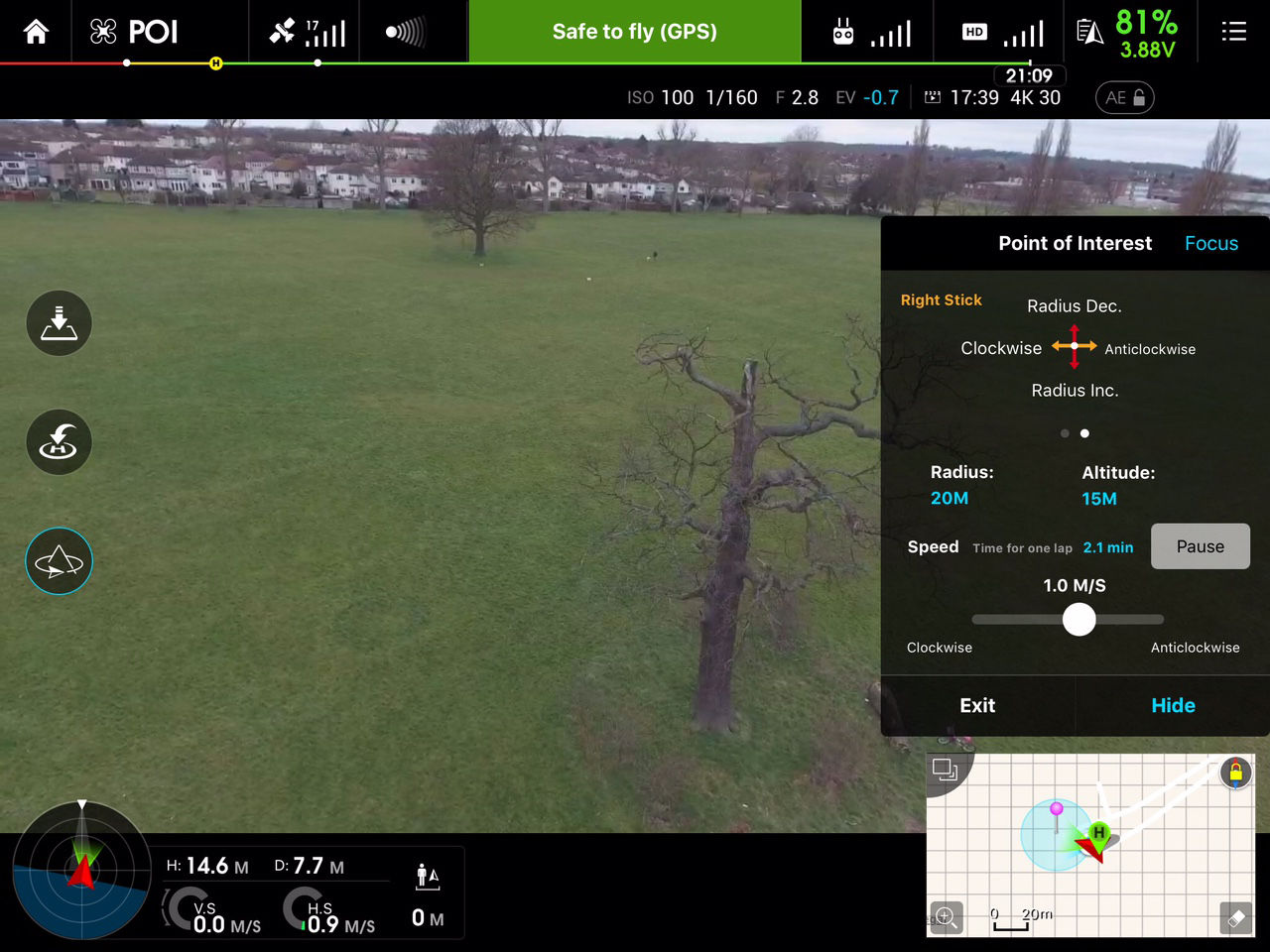 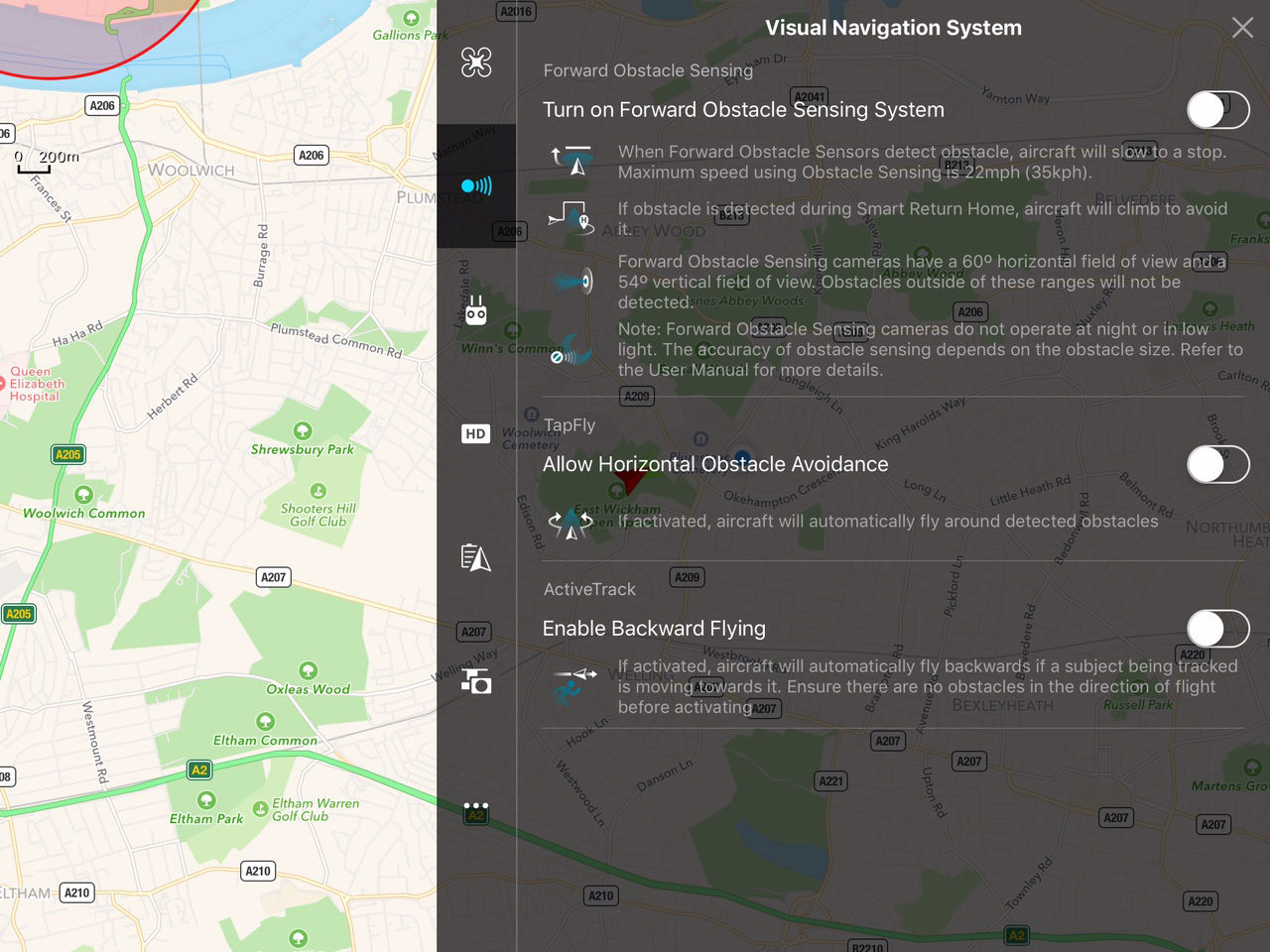