The Pebble Time is a good smartwatch, made all the more attractive by its price. It is probably the least you can spend on a fully-fledged (there’s some cheap tat out there) smartwatch, costing as it does the same as some high-end activity trackers. If you can pick one up for under £100, you’ll find it an easy to use notification device with the advantage of music control and an above average sleep tracker.

The Pebble Time is Pebble’s flagship smartwatch, an easy-to-use partner to your iPhone or Android smartphone with above average battery life. Here’s our Pebble Time review. See also t he best smartwatches of 2016.

The smartwatch landscape used to be a peaceful place, full of innovative small companies with bright ideas of how to put technology on your wrist. Pebble is one of those companies. Then in April 2015 the Apple tanks rolled into town and, so it’d have you believe, steamrolled the competition into submission with a product they have enough clout to just call ‘Watch’.

But if you don’t want an Apple Watch, the choices become a lot wider and more confusing. The bottom line here is that the Pebble Time is an excellent smartwatch and one we can recommend if you are on a sub-£100 budget.

You can find the Pebble time for a great price in our deals round up, just click here.

The Time is compatible with iPhone 4s and later running iOS 8 and above, and all Android phones running Android 4.3 Jelly Bean and above.

The Pebble Time’s RRP is £149.99, but at the time of writing is available here through Amazon for under £100 (£93.95 to be exact). This makes it one of the most budget friendly smartwatches around with devices like the Apple Watch at £259 after its recent price drop. Then there are Android Wear watches typically priced between £200 and £300, for example, the Motorola Moto 360 2, Fossil Q Founder and Huawei Watch.

In this way Pebble is off to a good start, with one of the cheapest smartwatches around, but if you really do want Android Wear then check out the Asus ZenWatch 2.

The Pebble Time is just the right side of understated for a smartwatch. The model we’ve been using is the all-black version, but it also comes in white and red. The sizable rectangular screen is not a traditional LCD, but rather an e-paper display with an LED backlight. Think of it a bit like a Kindle display but in colour and you’re basically there – its resolution is relatively low at 144×186 pixels, a pixel density of 182 ppi. This lends the display its slightly blocky, retro feel in comparison to those of higher resolution.

The screen comes with scratch resistant gorilla glass – ours picked up some scratches though, so note the use of ‘resistant’ as opposed to ‘proof’. Confusingly, Pebble also makes the Time Steel, which uses exactly the same software as the Time but with leather strap and metal body options. It can cost upwards of £200, but functionality is the same as the base Time model we used here.

At 42.5g we forgot we were wearing it, which is want you want but not something all modern smartwatches allow. It has a silicone band and is not noticeably heavy or bulky, but the band picks up a lot of dust and is surprisingly hard to keep clean day-to-day. However, the watch is compatible with all regular 22mm watchstraps, so there’s plenty of room for customisation.

On the reverse is a two-dot magnetic charging point, which you can’t feel at all when wearing against your skin. Pebble also claims the Time is water resistant to 30m, for all those times you fancy a deep sea dive on your lunch break.

As mentioned, the more premium Pebble Time Steel has the same software functionality as the Time, but comes with a material strap and metallic body. It’s available for around £40 more than the Time.

You control the watch via four physical buttons (back, up, down and enter) as there’s no touchscreen here. It takes a little while to get used to how it works, but after a while it becomes intuitive. I suspect the e-paper screen will be a make or break for many – we got used to its cheerful retro feel, but it is markedly less impressive than the excellent screens on (admittedly more expensive) watches from the likes of Samsung or Huawei.

There’s only 16MB of on-board storage, and during our use this didn’t run out even with app downloads. You can’t store music directly on the watch, so if you want tunes on the go you’ll have to bring your phone with you and use the Time as a Bluetooth remote control. It runs on an ARM 100MHz Cortex M4 processor and has 256KB of RAM, which is plenty for its capabilities.

Pebble claims the Time can manage seven days on a single charge. Unfortunately, this was not the case in our tests – the longest we went between charges, with the watch prompting us to plug in for juice, was four days.

This was when paired with a Samsung Galaxy S6 with all notifications received over Bluetooth, vibration intensity on the highest setting and the backlight timeout on five seconds (you can’t adjust the brightness). Perhaps with these settings limited the watch might come closer to seven days, but we were disappointed that it missed the claim by at least three days without fail. Having said that, it still outlasts the likes of Apple Watch and Samsung Gear S2 by at least two times. 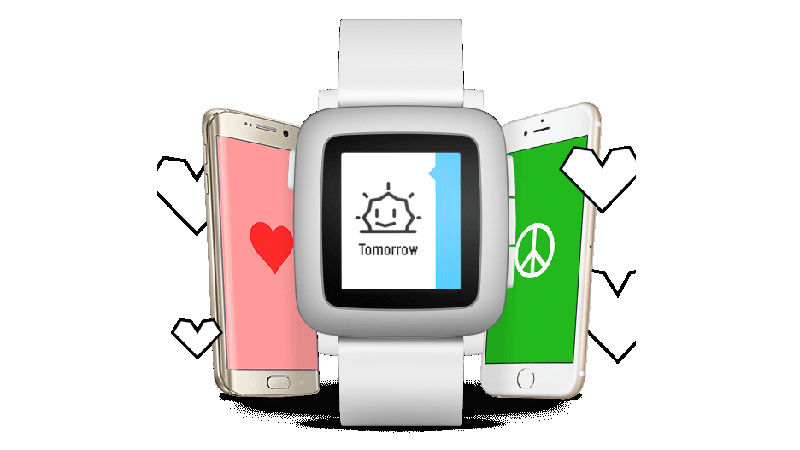 The display’s colours aren’t the boldest, but they pop out nicely with the backlight on and work well with the software, which is Pebble’s own. It has quirky little animations that move you between screens, our favourite of which is an ostrich wildly plunging its head into the sand when you mute an app’s notifications. As the Time doesn’t run Android Wear, Google’s smartwatch software, it is quite a refreshing change.

Think of the system as running on columns and rows, with the watch face acting as the home screen. Pressing up and down from here takes you backwards or forwards in time in whichever calendar you’ve synced to on your phone via an easy to read timeline.

Pressing enter on the watch screen takes you to the app list, which you navigate by pressing up and down, and enter to go right and into the apps. The best apps here are the pre-installed Health and Music apps. Health monitors your sleep incredibly well for a watch with no-heart rate monitor, and displays sleep patterns in a cleverly designed watch face diagram.

The Music app synced seamlessly with our Samsung Galaxy S6 and gave us excellent control over Spotify, for example. You can also easily download countless new watch faces, ranging from classic analogue styles (our preference) to a really weird one of Bernie Sanders doing Gangnam Style. There’s certainly something for everyone.

Where the Pebble Time falls down in comparison to its market rivals is in the range and quality of the other apps available. You can easily download more watch apps via the companion smartphone app, but for hardware and software as simple as the Time’s, we didn’t find many of them useful. The Uber app pairs with the one on your phone, and there’s an Evernote app too, but aside from that, there are really no recognisable brands that have a Pebble-compatible app.

There are numerous games and third party notification apps available, but we found them uninteresting. Importantly however, this doesn’t matter – the Pebble Time is excellent at what it does, which is provide notifications direct from the apps on your phone.

We found it worked very well with smartphone apps like WhatsApp, BBC Sport and eBay, alerting us to new messages and updates. We even dared (privately) to try out the voice-reply function for messages. It works surprisingly well with hardly any mistakes in transcribing short messages that we’d shyly directed at the watch’s microphone.