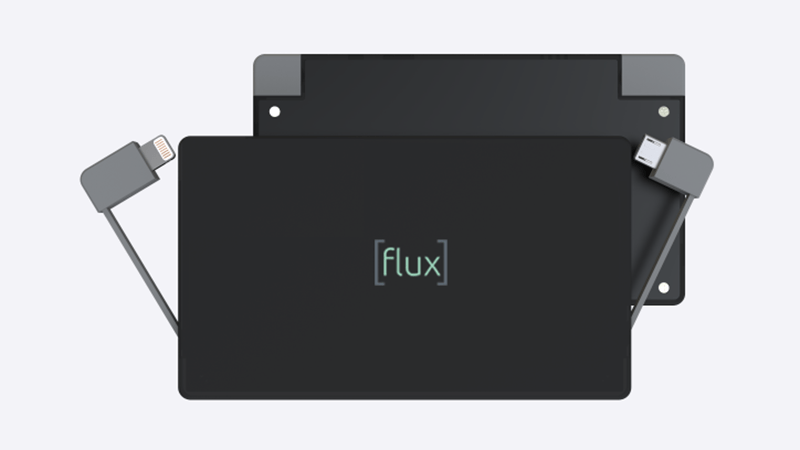 A fantastic upgrade over the original Flux Charger, the new 4,000mAh Flux takes onboard all our criticisms and comes back fighting. An excellent, truly portable power bank that will get any smartphone user out of a jam.

Power banks are extremely useful but they can be cumbersome, especially when you also have to carry assorted cables to transfer that power from the bank to your phone. Flux Card is the opposite of those power banks, slim, portable and with no extra cables required – for iPhone or Android. Also see: Best power banks 2018.

Since we wrote our Flux Charger review the company has updated its device, now clad in durable black or white aluminium rather than plastic, and still incredibly thin at 7.8mm.

The Flux Charger is today a much better deal, with higher 4,000mAh capacity and a separate built-in cable for charging an iPhone rather than a fiddly adaptor. Flux has also added four LED indicators that show how much charge remains, and a smart mechanism that can recognise your device and deliver an optimal charge.

Combined these new features turn an relatively ordinary power bank into one that stands out for its sleek, truly portable design. You don’t need to carry additional cables, and the battery will give any smartphone at least one full charge – potentially more depending on your device’s battery capacity.

The Flux Card is sold direct from fluxchargers.com in the US, where it costs £19.13. Shipping within the US is free, but to the UK it will cost you $8.50 and take six or seven days to arrive.

For every Flux Card purchased $1 goes to Flux’s charity of the month.

We’ve seen compact power banks with built-in Micro-USB or Lightning connectors before, such as PNY’s M3000 and DCM2200, but you are always required to choose between Android or iPhone before making your purchase (which is a real pain if you later change platform or use both). The Flux Card differs in that it can cater to both Android and iPhone. Also see: Best MiFi 2016.

On the side of the Flux Card is a Micro-USB input for refilling its battery, while a Micro-USB output is attached to the bottom of the device via a grey rubber cable that clips into place. Previously a Mi-Fi-certified Lightning adaptor sat below this, which you could use to pull out and charge an iPhone.

In the updated Flux Charger there is a second rubber cable that clips into the opposite side of the power bank for charging an iPhone. This is a significantly better approach, and now iPhone users feel like much less of an afterthought. Also see: How to charge your phone’s battery faster.

With an aluminium housing the Flux Card has a minimalistic yet sturdy design. It’s incredibly small and light, a credit-card-sized 7.8mm-thick (up from 6.6mm) power bank that weighs just 88g. Yet it contains 4,000mAh of power (up from 2,500mAh), which is easily enough to fully charge an iPhone one and a half times, and the majority of Android phones once. Also see: How to improve smartphone battery life.

With a 2.1A (10.5W) output the Flux Card is quick to charge your phone, but originally it wasn’t so quick to charge itself with only a 1A (5W) input. The company took that criticism onboard and now specifies a 1.5A (7.5W) Micro-USB input for refilling the battery. This accommodates for the jump up in capacity without drastically increasing charge times, and it supports passthrough charging (the ability to charge itself and a phone at once).

A newly added button is used to check the capacity of the power bank, but charging is automatic when you plug in your phone or tablet. Also see: What is Quick Charge 3.0

There’s not a huge amount in the way of advanced or extra features here, but the Flux Card isn’t that type of power bank. It’s a small and light emergency charger that you can slip into a bag and forget about until you find yourself stuck away from mains power with a fading phone battery. And it does that job very well.