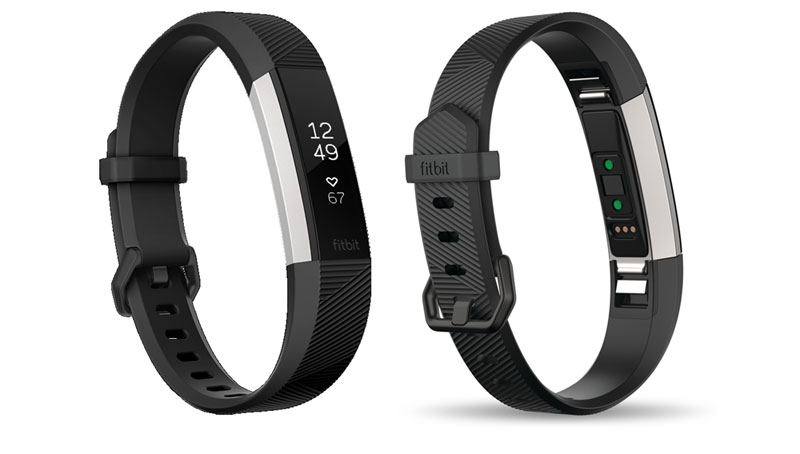 The Alta HR is Fitbit’s most stylish heart-rate tracker to date. It lacks an altimeter for stair and hill climbing stats, but its 24/7 heart-rate monitor will help you get fitter, lose weight, and better monitor your sleep. You get the core Steps, Distance, Calories and Sleep measurements, and automatic exercise recognition functionality. We love the Activity Reminder prompts which help you get more active during the day. Caller ID and the ability to read texts on your wrist are also big plus points. You really don’t need to wear a separate watch and you’ll hardly know you’re wearing the Alta HR as it’s so comfortable and lightweight. We think the Alta HR is worth the extra £30 over the standard Alta for both its heart-rate monitor and watch-like strap buckle. It challenges the Charge 2 as our favourite Fitbit.

The Fitbit Alta HR is a stylish, slim wristband that will appeal to people who prefer their tracker to be discreet but fashionable. This new Alta HR model adds a heart-rate monitor and much-improved sleep-monitoring features to the original Alta tracker; see our separate  Fitbit Alta review. Fitbit claims that the Alta HR is the world’s slimmest tracker with a heart monitor.

Both Alta bands are similar to the Fitbit Flex 2 but with a much more informative display, and more functions. The Alta HR sits between the original Alta tracker and the larger, more fully featured Fitbit Charge 2. As such it should appeal to people – and let’s be honest, Fitbit is targeting women here – who want a chic tracker with a heart-rate monitor.

With the heart-rate monitor you get improved fitness stats, more help with calorie-burning targets and some new super sleep metrics. Add in the much-improved wristband and the Alta HR looks like a hit.

The Fitbit Alta HR joins the other Fitbit activity trackers: the clip-on Fitbit Zip tracker, and fellow wristbands Fitbit Flex 2, Alta, Charge 2, Versa, and Ionic. It’s a confusing lineup, so read our Which Fitbit Is Best? feature for a full comparison of each tracker, and don’t miss our round-up of the Best Activity Trackers.

Note that the original Fitbit Alta is still part of the range. Currently, it costs £99.99 / US$129.95 / €149.95 from the Fitbit Store and can be found online at possibly cheaper prices.  View today’s best prices on Amazon.

It comes with the Classic wristband, but you can accessorise either Alta or Alta HR with a stainless steel Metal Bracelet (£69.99), gold-plated Bracelet (£109.99), or Leather band (£39.99). When engaged in vigorous exercise using the Classic band is encouraged as this is sweatproof, while the Leather band is not.

There’s a couple of Limited Edition designer versions for Alta and HR: the Public School Type III Paracord, a black, braided “military-style” bracelet that sells for £149/$175/€169.95 ; and the more pricey Public School Axis Accessory Band (£259.99/$295/€295.95) that turns the Alta into a standard but rather postmodern watch. These are accessories and so require the actual Alta HR tracker to be bought separately.

You can also buy alternative Classic Bands for £19.99 each.

The Alta HR is one of Fitbit’s slimmest wristband activity trackers: just 15mm in width. The new Flex 2 is even slimmer, at 11mm, but lacks the Alta HR’s larger and more informative display; see our Fitbit Flex 2 review. It’s comfortable in a can-hardly-feel-you’re-wearing-it way, and can act as a standalone watch as well as a tracker.

Like the Fitbit Flex 2, Charge 2 and Blaze you can remove the Alta tracker itself from the strap, which means you can switch to new straps when you like. This means you don’t have to replace the whole tracker if you damage the band.

It comes with a flexible durable elastomer strap (Classic) as standard, in four colour options plus two Special Edition trackers. Accessories include leather and metal bands; see below. The removable tracker is made from stainless steel, and the buckle from aluminium.

The Alta bands will fit the new Alta HR, so if you’re upgrading or replacing an Alta with the new version, your collection of straps will fit.

The Alta HR features a much sturdier watch-like buckle than the original Alta, which has a firm but less definite two-button pop clasp. We think the buckle alone is worth the extra money compared to the Alta, but we can confirm that the Alta never came off our wrist during testing either. The buckle closure is better for heart-rate monitoring, but the added robustness is a real bonus.

(Alta owners who are envious of the new strap but don’t feel the need to upgrade for the heart monitor can buy a buckle strap that will also fit their original tracker.)

We think either Alta will appeal to women particularly, as it is not bulky, is lightweight and looks stylish. According to Fitbit 80 percent of Alta owners are women, but the company expects the Alta HR to shift to a more unisex ownership. That’s not to say the Alta or HR is “girly” at all (or men can’t be stylish!), although it may take a man of immense self confidence to pull off wearing the Pink Special Edition model.

Its tap-based display is sharp (128-x-36 pixel resolution) and easy to read. Unlike the five-dot display of the Flex 2, the Alta’s 1.4-inch OLED makes it simple to check your exercise progress without having to open the Fitbit app.

The Alta HR comes in either Black, Blue Grey, Fuchsia or Coral, plus Special Edition colours Pink and Gunmetal; pictured below.

You must choose which size band you need. There is only one size of the tracker unit itself, but three different size wristbands: Small, Large and X Large. Fitbit has a handy (wristy?) size guide to help you choose the right size band.

The Leather Band is available in Lavender, Indigo and Brown colours.

If you prefer alternatives to the wristband you might want to consider the Flex 2’s Bangle and Pendant accessories rather than the Alta.

Above: the Public School Paracord and Axis Accessory Band; neither comes with the actual tracker, which must be bought separately (with Classic band).

Like the Fitbit Flex 2 the Alta HR (despite its name) lacks the altimeter found in the Charge 2, Versa and Ionic. This means it won’t measure stairs or height to push you to take the hills rather than the flat. If running up lots of stairs and measuring this activity is important to you, should consider one of the other Fitbits; see the Fitbit Comparison Chart here.

The Alta HR monitors your heart rate – using the same PurePulse technology as the Charge 2, Fitbit Versa or Fitbit Ionic trackers. Measuring heart rate is important for gym goers, and indeed anyone interested in losing weight. The heart-rate tracking Fitbits use three heart-rate zones to help you optimize your workout by targeting different training intensities.

We’re confused why Fitbit hasn’t added its Guided Breathing feature to the Alta HR as all the required tech seems to be there, and a natural fit for the targeted Alta HR owner.

If you can live without this level of fitness data the Alta is fine, but the extra heart-rate monitor will appeal to even the moderate exerciser; you don’t need to be a fitness fanatic to get the benefits of a heart tracker. The HR also has the benefit of giving much more detailed sleep monitoring information; see below.

Inactivity is as important to your health as activity, and making sure you get a good night’s sleep should be one of your fitness priorities.

While the Alta will record your sleep patterns, noting when you are restless, average to-sleep times, and length of sleep, the Alta HR goes further – using its accelerometer data and heart-rate variability (the changes in time between beats) plus Fitbit algorithms to more accurately estimate how long you spend in Light, Deep and REM Sleep Stages, as well as time awake, each night.

The Alta HR’s vibration motor means you can set “silent” alarms to wake you up, and also notify you when you someone calls your phone or sends you a text. Calendar notifications are another handy feature.

You can set up the Alta HR to display text messages right there on your wrist, so you don’t have to reach in your pocket or bag for your phone.

Caller ID will let you know who’s calling if the person phoning is in your phone’s contacts.

The tracker knows when you’re cycling, running, hiking or playing sports including football, tennis and basketball. They will also recognise aerobic workouts such as Zumba, cardio-kickboxing and dance workouts. They will record the exercise in the Fitbit app along with an exercise summary.

Another great feature is Reminders To Move, exercise prompts that buzz you into getting off your backside after sitting too long at your desk, for instance. This encourages you to meet a mini-step goal of 250 steps each hour (approximately 2-3 minutes of walking). These prompts can be personalised to your schedule; for example they can be put on “Do Not Disturb” during long meetings or appointments.

This is especially important in light of recent medical research that suggests that desk-bound office work is actually worse for your health than smoking! Experts – led by Prof Ulf Ekelund from the Norwegian School of Sports Sciences and Cambridge University – found that the risk of dying (within two years of its study on over a million people) was 9.9 percent for those who sat for eight or more hours a day and engaged in low activity. This compares with a lower 6.8 percent risk for those who sat for less than four hours a day and were active for at least one hour a day.

The team found that this increased risk of death associated with sitting for eight hours a day was eliminated for people who did a minimum of one hour of physical activity a day.

You tap the tracker’s display to access stats, the time and notifications on the 128-x-36–pixel, 1.4-inch OLED display. You can set different clock displays and also choose whether you want to read the displays in a vertical or horizontal format. 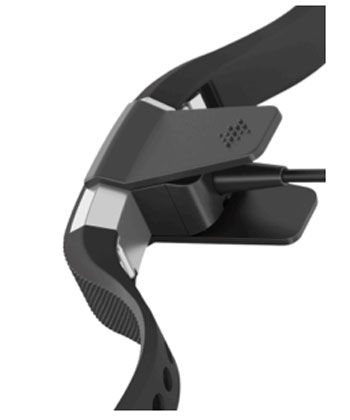 The Alta HR should keep running for up to seven days between charges, depending on how many times you access the display, set the alarm, or receive texts and calls during the day. Despite its additional heart-rate monitor, this is an improvement on the original Alta tracker that has a five-day battery life. Fitbit updated the tracker’s chip, which left more space for a bigger battery.

Yet again the proprietary charger is different from every other Fitbit tracker. Its clamp mechanism is neat, but you might want to keep a spare charger (£13.99) away from home, at the office for instance. It’s every Fitbit wearer’s nightmare when the battery gives up while you’re still on the move.

Fitbit doesn’t recommend you wear the Alta HR when swimming or even in the shower – although it will probably survive an accidental dunking or even joining you in the shower according to our long-term tests. It’s fine in the rain, and sweaty exercise situations. For more information read our Is Fitbit Waterproof feature and check out the best swimming fitness tracker roundup for devices that are waterproof and have special swimming functions.

if you want a swim-tracking, waterproof Fitbit the Flex 2, Versa or Ionic are for you.

The easy-to-use Fitbit app (iOS, Android and Windows Phone) offers wonderful graphs and charts for all the activity and sleep data, and there’s a desktop dashboard for even more detail.

One of the best things about Fitbit is the social Friends leaderboard where you can compete with friends and colleagues to see who manages the most steps each week. You can also challenge each other in various daily or weekly goals, as well as Cheer and Taunt or send messages via the app.