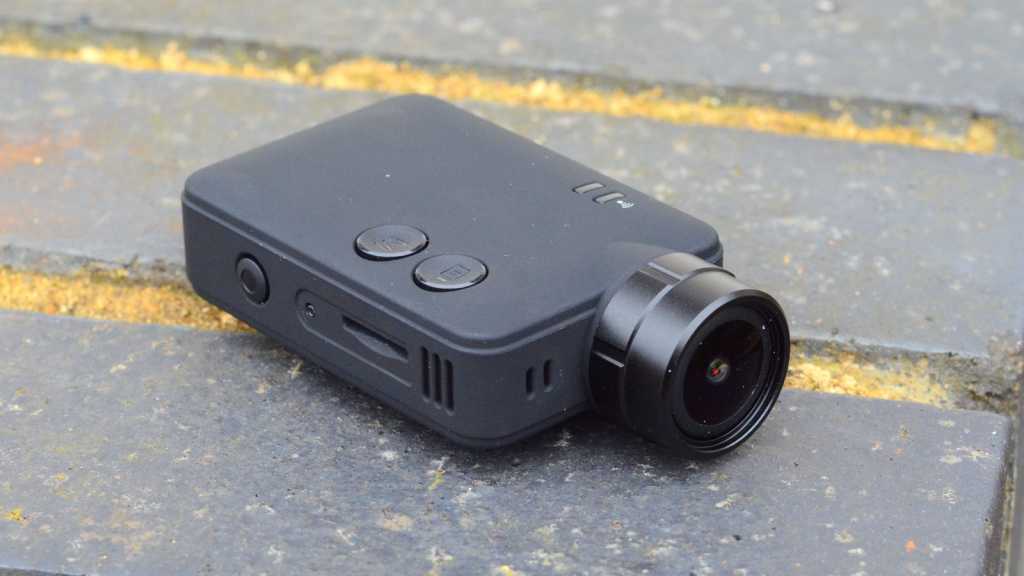 As a dash cam, the JooVuu X does a great job, and is good value considering it has both GPS and Wi-Fi. The lack of even a GoPro-like LCD screen is a shame, but it’s not a dealbreaker. Image quality is impressive and the timed mode switching is a real bonus. As an action cam, it benefits from being tiny and light but really needs a case to protect it. The fact that swapping in a replacement battery requires a screwdriver means it’s not as convenient as something like the SJCam SJ5000X.

These days, it’s not difficult to get hold of a GoPro clone for considerably less money than the real thing. And these knock-offs can be pretty good: the SJCAM SJ5000X, reviewed, shoots great-quality video for the money and also doubles as a dash cam. However, capturing action is its primary aim. But the JooVuu X does things in reverse: it’s primarily a dash cam which you can also use as an action cam.

There are two models of the camera, the dash cam version costs £114.99 from JooVuu.com It comes with a power cable that has an integrated GPS receiver and an adhesive windscreen mount. You also get a mini CD in the box with a Windows app for playing back footage.

The other is an action cam bundle – also £114.99 – which will go on sale shortly. This omits the GPS and windscreen mount in favour of a head mount and selfie stick.

The actual camera is the same in both cases, and you have the option to use a super-capactior which costs £7.99 instead of the battery (which is replaceable if you have a screwdriver) which costs £6.99

There are plenty of accessories on the way, too, including a stabiliser for use handheld and on a bike, a circular polariser filter for £19.99 (like the NextBase 512G has), a waterproof case and more.

If you’re familiar with action cams and specifically those mountable on a drone, then you’ll probably see the similarities with the popular Mobius camera. However, the JooVuu X is better specified and has more dash cam features.

It’s tiny at just 71x42x14mm and the narrow height makes it perfect for stealthy in-car use: it’s much harder to spot than most dash cams. The adhesive mount means you can’t swap it from car to car or change its position, but it keeps the size down compared to suction mounts, will stick to the shaded area behind your rear-view mirror and it won’t fall off like some suction cups do. You’re more likely to leave the JooVuu in situ when the car is parked than bigger cameras which might be a target for thieves.

The camera attaches using a standard tripod mount, which could be handy as it’s easier to make your own mounts or buy some with tripod threads. But it’s also a disadvantage: there’s no quick-release mechanism. Still, it only takes a few seconds to unplug the power wire and unscrew it from the windscreen mount.

In the box is a clip which screws onto the camera and allows you to slide it onto a cap, or even a sun visor if your car has particularly thin ones.

Cleverly, it will switch between two different video modes at times you set so you can get the best of both worlds: 60fps during the day when light is plentiful and 30fps at night when it isn’t.

Buttons are kept to a minimum and there are just mini USB and micro HDMI ports on the back. You slot in your own microSD card (up to 128GB) at the side.

What’s missing is a screen: there’s no display at all. LEDs tell you what’s going on, and you have to use the built-in Wi-Fi to view a live feed, change settings and review footage via an Android or iPhone. There’s no battery level indicator, which is an issue when using the camera as an action cam.

For some people, this will be a reasonable compromise for such a small camera which can be used for more than dash cam duties. For others, it will be a reason to choose a different dash cam.

Aside from the power button, there’s a record button and a mode button. The latter can be used to switch between your two preset video modes, and it enables and disables Wi-Fi if you hold it down for a three seconds and let go. You only know which mode you’re in by the fact the light flashes faster for mode 2, so you’ll have to make a mental note of which is which if you want to be able to switch between them without using the app.

We’ve mentioned it already, but a waterproof case will be available to buy soon. This will be an essential accessory for action cam use since the JooVuu is a bit exposed without one, not just to the elements – it isn’t waterproof – but also damage if you crash or drop it.

When in its normal habitat inside a car, it will automatically start recording when it gets power, and you can buy a hard-wire kit for £13.53 from the JooVoo shop. This should be especially useful when the parking mode is properly implemented over the coming months. The camera already supports motion detection, so you can use this right now.

A handy feature we’ve not seen with other dash cams is a USB port under a sliding cover on the adaptor which plugs into your car’s 12V socket. This means you can still power other things such as a satnav or charge your phone.

All other settings have to be adjusted via the app. It looks fairly basic, but is arguably easier to use than some of the fiddly menu systems on many dash cams.

In each of the two modes, you can choose resolution, bitrate, whether to loop video or not, and whether auto rotation is on or off. You can also enable or disable HDR, time stamp, speed stamp and audio.

It’s possible to change the field of view for video, from 60 degrees (horizontally) up to 155 degrees for an ultra-wide angle.

With auto rotation on, the camera will record video in the correct orientation no matter whether it is upside down (which it is in the car) or the ‘right’ way up, which you’ll probably want for action cam use.

If you dig deeper in another menu, you can change more image quality parameters such as exposure, contrast, white balance and sharpening.

There’s no button to lock a clip and stop it from being deleted, but if the G-sensor is enabled, the clip will automatically be made read-only so it can’t be overwritten when the card is full.

You can use the app to take photos (these are interpolated up to 13Mp) and start and stop recording – potentially handy if the camera is mounted out of easy reach.

Currently, Android is the preferable choice of device for the app as the live stream appears more quickly than on iOS. It also seemed more responsive overall.

Image quality is very good for the price, although colours are a bit oversaturated. Video at 2560×1080 (at 155 degrees) is pretty sharp and it’s usually possible to make out number plates on cars close to you. Sharpness is good at the centre of the image, but it does soften towards the edges as you can see from the video grab below. (Note that the video clip below has been processed by our video player and the raw footage is sharper.

It’s preferable to use a narrower field of view to make objects a little larger: unless you’re following another car closely, it appears very small in the frame; the registration plate miniscule.

The 60fps frame rate at 1920×1080 means footage is smoother than at 2.5K, and audio is decent: the mic is also stereo rather than mono and clearly picks up voices inside the car and general ambient noise.

As an action cam, we used the bike mount we were sent to record a two-mile commute in London on several occasions. Battery life is respectable considering the size: it lasted over an hour in total in the cool March breeze.

Since you can’t easily swap batteries like a GoPro, it means you’ll probably want to carry a USB power bank to recharge the JooVuu X, or even use a small power bank strapped to you – or your bike to power the camera for longer.

We did find that the auto-rotate sensor was fooled by big jolts – such as cycling over a drain cover – and meant the resulting video flipped upside down for a second before returning. We’re told the software is being updated to change the sensitivity and also add the options of 180-degree flip, normal or auto, so you at least get the choice.

And talking of updates, this is very much a camera in development so there’s image quality improvements on the cards as well as feature updates and tweaks to the app.