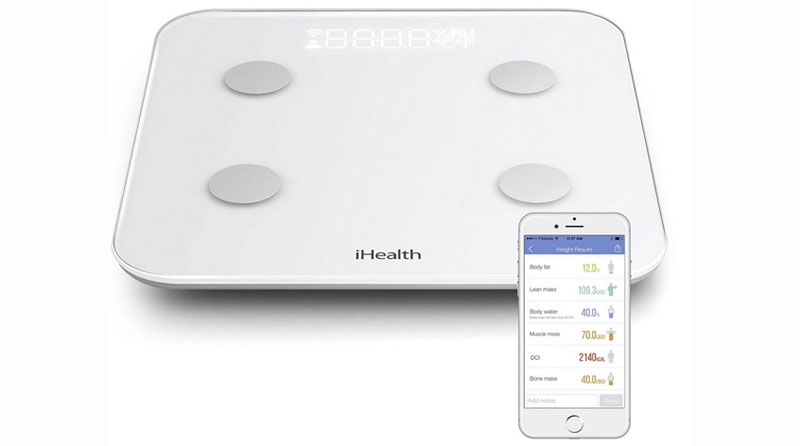 The iHealth Wireless Body Analysis Scale measures much much more than just your weight, and links well with the iOs and Android app to give your probably more body data than anyone but a doctor will need.

Let’s face it, most of us wear an activity tracker not just to measure our exercise but as part of a plan to trim tummies and lose weight.See Best Activity Trackers.

You can walk 20,000 steps a day, but if you’re munching a Mars Bar while you do it, you are unlikely to shed many pounds.

Smart scales are going to help here. Like Fitbit’s Aria scale the iHealth Wireless Body Analysis Scale does more than weigh you and report back to the app.

With such data you can tell how all that extra exercise is affecting your general fitness. It’s part of the iHealth family of fitness and medical gadgets including the iHealth Edge activity tracker and iHealth Wireless Pulse Oximeter.

And no one needs instructions about how to use some bathroom scales. Connect to your iPhone/iPad or Android via Bluetooth. You use the scales with the iHealth MyVitals app.

Step on the scale and it will read your weight, then display your Body Fat percentage.

Up to 20 people can use the scale; it should automatically recognise you via your previous recorded weight.

The iHealth wireless body analysis scale costs €119.95 direct from iHealth, and can be found for around just under £100 via Amazon. At Amazon.com it was priced at $129.99 at the time of writing. Best online prices are listed below this review.