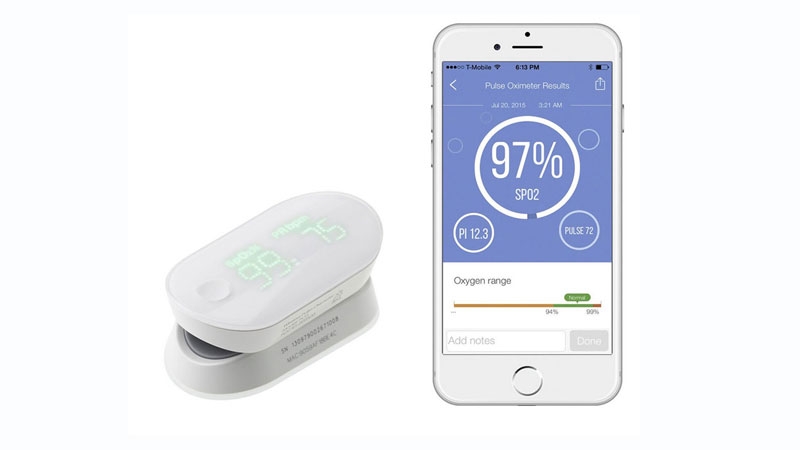 The iHealth Air Wireless Pulse Oximeter is a dinky gadget that simply lets you understand the oxygen levels in your blood (Sp02), your pulse and perfusion index – all you need do is slip your finger and press a button. The two blood-pressure monitors (iHealth Sense and iHealth Feel) offer medical data in your own home.

The iHealth Air is a pulse oximeter that lets you understand the oxygen levels in your blood (Sp02), your pulse and your perfusion index. It’s a part of the iHealth family of fitness and medical gadgets, led by the adffordable iHealth Wave activity tracker, reviewed.

Your pulse oximetry normal values are dependent on your health condition, respiratory rate, percentage of oxygen in the air, activities you are performing, and other factors.

The iHealth Wireless Pulse Oximeter (PO3) is super easy to operate – just slip your finger inside, and fire up the app if you want to record the data. Otherwise it shows up on the device’s own neat display.

For a regular healthy person, the normal blood oxygen saturation level (SpO2) should be around 94 to 99 percent. People with mild respiratory diseases should still have an SpO2 of 90 percent or above. Supplementary oxygen should be used if SpO2 level falls below 90 percent, which is unacceptable for a prolonged period of time.

If people are concerned about their SpO2, they are able to capture data at different times of day, on the go, and then share it with their doctor. This negates the need for referrals in some cases and can help you get to a conclusion more quickly.

The Perfusion Index (or PI) is the ratio of the pulsatile blood flow to the non-pulsatile static blood flow in peripheral tissue, such as fingertip, toe, or ear lobe. The PI’s values range from 0.02% for very weak pulse to 20% for extremely strong pulse. I’m not sure how useful it is for most people, as PI is mostly used to monitor critically ill patients.

The measurement of Sp02 and pulse levels is useful for people with chronic diseases such as asthma or Chronic Obstructive Pulmonary Disease (COPD) to quickly determine the severity of their condition.

Sports players and serious fitness fanatics find the measurement of pulse and SpO2 to help them understand how their bodies react to exercise.

The normal pulse for healthy adults ranges from 60 to 100 beats per minute. A lower heart rate at rest generally implies more efficient heart function and better cardiovascular fitness. For example, a well-trained athlete might have a normal resting heart rate of around 40 beats a minute.

SpO2 measurement is also a motivation for smokers trying to quit, as they can see the changes in their blood oxygen saturation.

All this data is visible on the device display and historically in the iHealth app.

The iHealth Air Wireless Pulse Oximeter costs €79.95 direct from iHealth, and can be found for around just under £55 via Amazon UK or $56 at Amazon.com.

The iHealth Feel and iHealth Sense measure blood pressure, heart rate and detect arrhythmias. If you suffer from hypertension or have cardiovascular problems the ability to self-monitor blood pressure will be a boon, unless the worry sends your blood pressure even higher!

Both connected blood pressure monitors are part of the iHealth family of fitness and medical gadgets, which sync well with a single iOS and Android app.

The top-end universal 22-42cm iHealth Feel connects with your upper arm. The blood pressure cuff fits all and is easy to use – just put it on your arm following the arrows on the cuff and press the Start/Stop button.

The iHealth Sense is a cheaper blood-pressure measurement device, which connects with your wrist rather than upper arm. As it’s more compact than the iHealth Feel it’s easier to carry around with you. It can take 80 measurements before it requires recharging.