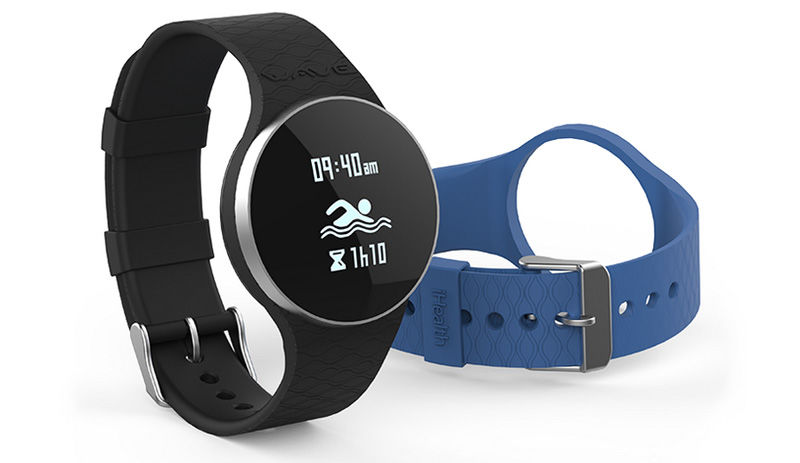 The iHealth Wave is part of a suite of fitness-monitoring devices that will help you use exercise to get more healthy. It measures most (but not all) of what rival activity trackers do and adds swimming, which will be a big plus for many. Its app connects to wireless scales and pulse measures, plus other health-related gadgets. If you prefer your tracker to look more like a watch than a band, you’ll like the iHealth Wave’s old-school round tracker; and it comes with a choice of two wristbands. It lacks some of Fitbit’s measures (such as heart rate and floors climbed, plus Caller ID and other notifications from your smartphone) but boasts the swimming mode, an automatic workout and exercise reminders mode that are absent from the older Fitbits. It’s great for non-competitive swimmers who want to improve general fitness, but it’s not the most impressive for tracking swimming fitness overall.

The iHealth Wave (AM4) is a waterproof activity tracker that looks like a regular watch but measures your swimming strokes as well as the number of steps you walk or run each day, distance travelled and calories burned. And at night it analyses the quality of your sleep, so it offers 24-hour personal monitoring. See all activity tracker reviews.

Few trackers are properly waterproof – instead being merely “water-resistant”, which means they are rain-, sweat- and splash-proof but not ready for a dive into the pool. That means that these trackers don’t measure all your fitness activities, and if swimming is one of your key exercise routines you’ll be after a tracker that doesn’t ignore you in the water. See: Is Fitbit waterproof?

Swimming burns calories, so helps you lose weight, and it’s praised for its cardiovascular health benefits. Swimming uses many muscles in your body, and makes your heart and lungs work hard to supply them all with oxygen.

Swimmers should read our round up of the best swimming trackers.

Because water is about 800 times denser than air, you can work harder and burn more calories in a pool than out of it. Even a gentle swim can burn over 200 Kcal in half an hour and a fast front crawl can burn as many calories as an 8mph run.

In March 2016 we reviewed the non-waterproof iHealth Edge, which is now replaced by the iHealth Wave but is still available at some online retailers.

The Wave is much like the Edge but with waterproof rating, an improved strap (with safer watch-like buckle), and the ability to monitor and measure your swimming. All in all it’s a great upgrade.

Activity trackers are making a lot of us fitter – or at least more active – with their encouraging statistics of our exercise and sleeping patterns.

Joining the Fitbits, Jawbones and Apple Watches the iHealth Wave is actually just one part of a large family of health-monitoring devices, including wireless scales to measure your weight, a pulse oximeter to check the oxygen levels in your blood, and blood-pressure monitors, as well as glucometers to measure your glucose levels. See also: Which Fitbit?

If you want a doctor’s armoury at home iHealth has the digital tools you need to monitor a wide range of key health signals. Here we concentrate on the iHealth Wave, but the range of health-measuring devices is welcome in creating one healthy product ecosystem; we’ve also reviewed the other iHealth gadgets. For details on the whole linked range of iHealth monitors read our iHealth Air Wireless Pulse Oximeter and blood pressure monitor reviews.

Also read our Best Smart Scales reviews for wireless weight and other health metrics measurment, which includes a review of the iHealth Core smart scales.

On the company’s website you can buy the iHealth Wave for €79.95 (about £67), but we found it cheaper online at retailers such as Amazon (at the time of writing we found it there for around £60); Amazon.com sells it for $80. See the price listings below for the latest, best online prices.

There are other waterproof activity trackers, such as the Moov Now and Misfit Speedo Shine, but these don’t show you your stats direct from the wrist. The Shine also doesn’t recognize different swimming strokes. The more sophisticated swimming trackers, such as the TomTom Spark (£189.99) and Garmin Vivoactive (£159.99) are maybe not for the more casual fitness swimmer.

The swimming stats breakdown your swimming session by stroke: breaststroke, crawl and backstroke. If the Wave doesn’t recognize what you’re doing it records the stroke as “Other”.

It measures the length of time you swim with each stroke, number of strokes, strokes per minute, and calories burned while swimming.

We also got some false positives, which thought I was swimming when I was doing nothing of the sort. This is probably because I left the app in a swim-ready state rather than switching this function on just before entering the pool. iHealth warns that some activities, such as tennis or squash, can appear similar to swim strokes so it’s wise to turn on the swimming mode a few minutes before you dive into the pool. This should also preserve battery life, too.

We also handed the Wave (along with a selection of its rivals) to an accomplished swimmer to test. He wasn’t entirely convinced by its accuracy. Unlike rivals, the Wave seemed to take a while to pick up that he was swimming. However it did identify changes in stroke correctly unlike most of the others, and it gives stroke per minute (SPM) and a lap counter. There’s no breakdown of pace and changes in SPM, so the Wave isn’t much use over longer sessions when changing between, say, sprints, warm-up and strokes. Plus, you have to sync it with your phone to view this data.

Like the Fitbits and Jawbones the iHealth Edge measures steps, distance and calories burned. We wore it alongside a Fitbit Charge HR, which offers more measuring data (heart rate sensor and an altimeter for floors climbed) but also the basics. The more advanced Fitbit models also offer Caller ID and other notifications, linked to your phone. The Wave doesn’t have this handy feature.

It also measures your sleep, recording when you were awake, asleep or in deep sleep.

One feature we really liked about the Wave is its automatic Workout Mode. After a period of activity the tracker works out when you have finished your walk or run and buzzes your wrist to show you how long your workout/walk lasted plus the steps, distance and calorie stats.

Some of the later Fitbits (Charge HR, Blaze, Surge) also have this automatic exercise recognition feature.

Like all good trackers the Wave syncs with a free app (iHealth MyVitals compatible with iOS, Android and Windows Phone). Here you can check your performance against your own fitness goals.

The app is clear and can also connect with the other iHealth devices. You can look at “Recent” for that day’s activity stats, and also Trends, that can show stats by Week, Month and Year. We’d like iHealth to add the ability to swipe back through more detailed stats on previous days rather than just the day today and then more basic “trends”.

The iHealth Wave can also share its data with the Apple Health Kit if you prefer to use Apple’s app – something you can’t do with the Fitbits.

Like the Apple Watch and the Fitbit Alta, the Wave can politely remind you to get out of your seat and move around at set intervals of inactivity. We love this feature as it’s too easy to sit at your desk during the day and not move for a few hours. A gentle prompt to go take a walk, make a cup of tea, or whatever is a neat way to make you increase your activity during the day.

You can also set a quiet vibrating alarm to wake you but not your partner. One turn and it will show you the date and time, plus battery life and whether the device is connected by Bluetooth.

The Wave, like the Edge, has a large, circular display, much like a normal watch. The backlit display is activated by a simple turn of the wrist. Otherwise it stays off to save battery life.

Tap the screen and you’ll see how many steps you’ve taken today, tap again for the distance you have travelled (on foot). The next tap shows the estimated calories that you have burned that day. It will also show you how far you have progressed to your performance goals.

While it looks like a large display the actual part of the screen that can be activated by taps and swipes is actually quite small, which means not all your fingers’ orders register with the tracker – sometimes I was tapping it quite a few times before it sprang to life. Once you get used to it, this should be less of a problem.

The Wave has two wristbands in the box – one black, and one sporty blue – which is more choice than most other trackers give you; although the older Edge shipped with four different colour bands!

The tracker itself is easily popped in and out of the strap, but isn’t loose enough to fall out of its own accord.

We like that the Wave’s strap is better than the Edge’s pop-in clasp. It has a watch-buckle type fastening, as found in the Fitbit Charge HR, Blaze and Surge, and the Apple Watch. Owners of the lesser Fitbit Charge and Flex have often complained about the pop-in clasp working itself loose, and therefore getting itself lost. The Wave strap is not going to suddenly slip off your wrist.

The iHealth Wave charges via USB.