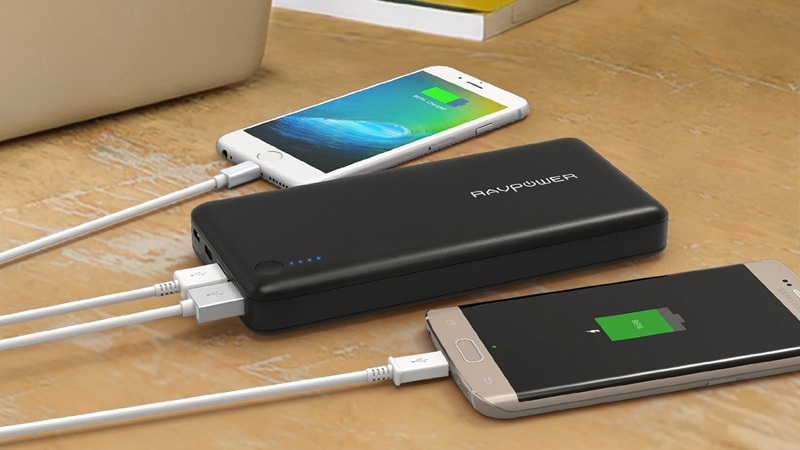 It’s not the most feature-rich or sexiest power bank (should such a thing exist), but the RavPower is affordable, high in capacity, futureproof and oh so very fast. Highly recommended, even if you don’t have a USB-C or Quick Charge 3.0 device right now.

The RavPower Turbo+ 20100mAh External Battery Pack is currently the fastest power bank you can buy, and an awesome companion for the LG G5 and other 2016 devices that support Quick Charge 3.0 and USB-C. Also see:  Best power banks 2018.

We’ve written a separate article explaining what is Quick Charge 3.0, but in essence it offers the fastest way to charge a compatible smartphone, such as the new LG G5 and Xiaomi Mi 5. All you really need to know is that it’s super-fast: whereas charging a generic smartphone battery with a standard charger might take it from zero- to 30 percent in 35 minutes, Quick Charge 3.0 could get its battery to 80 percent in the same amount of time. It’s a massive time-saver.

Not only does one of the RavPower’s two full-size USB outputs support Quick Charge 3.0, but it’s also supported on the Micro-USB input, meaning it will reduce the time it takes to fill this very-high-capacity power bank ( you’ll find some Quick Charge 3.0 wall- and car chargers here). Or you can use the RavPower’s reversible USB-C port, which acts as both an input and output and operates at 15W (5V/3A), making the Turbo+ easy to use with the likes of the Nexus 5X and Nexus 6P, and the 12in Apple MacBook.

Quick Charge 3.0 is supported by only a handful of devices right now, but this will change very soon – and in any case it’s backward-compatible with Quick Charge 2.0, which is much more common.

Even if you don’t have a Quick Charge or USB-C device just now, the RavPower is worth a look as a future-proofing measure – if you intend to upgrade your smartphone within the next few years, it’s likely that it will come with one or both of these new technologies. In the meantime, the RavPower has a standard 2.4A (12W) USB output with iSmart device-recognition technology that is able to deliver the optimum charge for your device type. Also see: How to charge your phone’s battery faster.

Other than super-fast charging, though, there’s not a great deal here to make it stand out. The black plastic casing feels tough enough but it’s a little bland-looking, and we’d much prefer to see an LCD rather than four-LED system to show how much juice remains in banks of this capacity. There’s no torch, no auto-off when a device has finished charging (at least not on our Samsung Galaxy S6), and no passthrough charging. You do get a carry case and two flat Micro-USB cables, which is handy given the two USB outputs, but you’ll need to provide your own USB-C cable if you wish to use this port. Also see: Best desktop chargers 2016.

But a power bank is first and foremost a device that can get you out of a jam when you’re away from mains power. This RavPower, with 20100mAh of power to hand, can do so time and again – you should get up to seven full charges for an iPhone 6s, five charges for a Samsung Galaxy S6 and two charges for an iPad mini. That does mean it’s fairly chunky at 172x80x20mm and 375g (you won’t want to carry it in a pocket), and not the most energy-efficient of power banks – no more than the industry standard 65 percent – but the fact it is quick to both charge and recharge is definitely in its favour. And using it is easy: you just plug it in. Also see: Best MiFi 2016.

It’s worth clarifying our statement that the RavPower Turbo+ with QC 3.0 support is the fastest power bank you can buy. There are power banks that claim to be faster, such as the Simpiz iTron (we’re awaiting our review sample) which uses DUBI 1.0 to refill its 9000mAh battery in just 18 minutes, but its output to your phone is slower Quick Charge 2.0 rather than 3.0. And then there are those that seemingly claim to charge your phone in just five minutes; actually, they do no such. In five minutes they refill their own batteries enough to fully charge your phone, at whichever speed your phone supports.