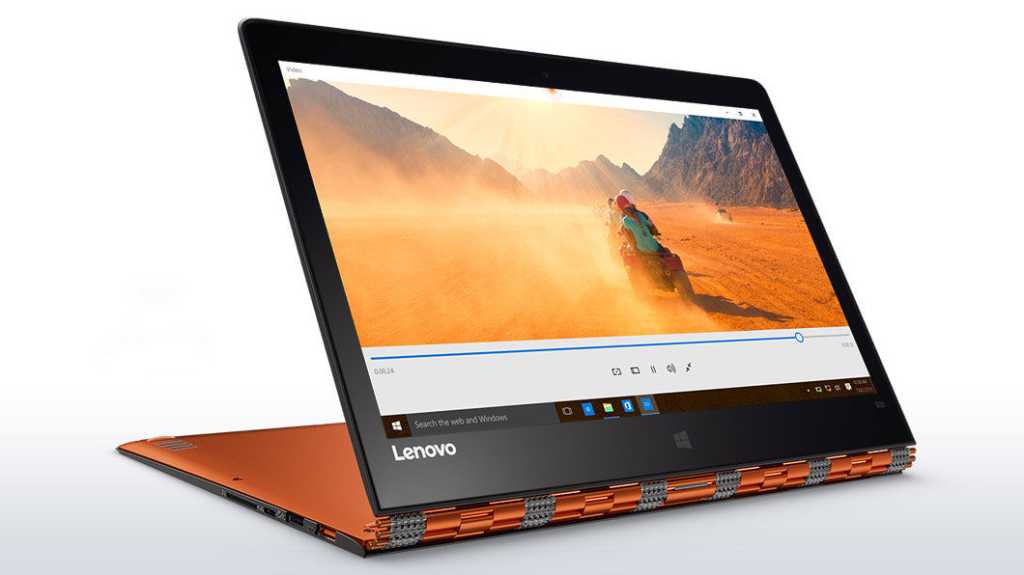 The Lenovo Yoga 900 is a laptop that really asks you to believe in its design style. After all, it doesn’t come cheap and for the price you can get a laptop with much more power if you’re not out for something immensely portable. That’s where this laptop excels: portability. As well as being slim, light and all-round lovely, the smart hinge lets it sit where most other laptops just can’t. The battery should last through a full day’s work as well. The trackpad can feel fiddly and the display isn’t perfect, but if you’re feeling flush this is one of the top ultraportables around.

The big news in laptop CPUs in 2015 was the Intel Core M, a chip so small and efficient that it allows machines such as the MacBook 12in to offer levels of performance similar to those of an Intel Core i5 system. The Lenovo Yoga 900 flips things around again (literally). This is a slim, light laptop with a fold-back touchscreen and a long-lasting battery. But it also has a full-fat Intel Core i7 processor. Think last year’s Lenovo Yoga 3 Pro, but with a six pack and bulging biceps. See also: 20 of the best laptops you can buy right now

Make no mistake, though, the Lenovo Yoga 900 isn’t a bargain laptop. It’s more expensive than the similar but less powerful Yoga 3 Pro, starting at £1,199 for the Core i5 version and moving swiftly up to £1,499 for the 900-131SK with upgrades to a Core i7 CPU and increased storage.

At the time of review, Lenovo was offering £100 off the Yoga 900 when bought through its own web shop.

Plus, you get a choice of silver or orange versions. The latter should appeal to anyone that wants to be noticed: the lid and hinge are too bright to miss.

Being a hybrid – a laptop and tablet in one – the obvious rivals is  Microsoft’s Surface Book but if you want a hybrid on a budget, then have a look at HP’s Envy 13.

When you see a Lenovo laptop bearing the ‘Yoga’ name, it tells you all you need to know about its key design feature. The Yoga 900 has a special hinge that lets the screen flip around 360 degrees, so that the display sits flat on the back of the keyboard.

Before you use a laptop like this, it’s easy to dismiss the thing as a gimmick, and think you wouldn’t want to use a tablet weighing more than a kilogram. However, it’s the angles in between that matter most. As the Yoga 900 hinge can sit at just about any angle, it can turn the display into a shallow-footprint touchscreen PC, an impromptu TV or a tablet that stays at just the right angle as you laze on the sofa. This Lenovo uses the same style of ‘watch’ hinge that we saw in the Yoga 3 Pro. It’s made of 800-plus pieces and looks fantastic. As the Watch monicker suggests, it design is inspired by stainless steel watch straps.

It is similar to the one used in the Microsoft Surface Book, spreading the tension across more than the usual two connection points you get with a bog-standard laptop hinge to make the mechanism steady, while keeping its motion easy and smooth.

You could argue that Microsoft’s take on the idea is a bit more cohesive, though. In making the hinge a different colour from the rest of the laptop and deliberately exposing its workings, some might think that the Yoga 900 is a bit showy.

If you want to take the bold look of this Lenovo even further, you can get it with a bright orange lid/underside. Many like the company’s laptops for their steady, serious ThinkPad keyboards, but this is something altogether different.

The Yoga 900 build is well built throughout, too. The lid and underside are made from a magnesium alloy, which looks a lot like aluminium and is very strong, but has a touch that some mistake for plastic. Still, the application here still feels pretty metallic,

Continuing the trend of conspicuously not making Apple-like moves, the Yoga 900’s insides have a faux leather finish. It’s much nicer than that might sound, coming across like a lightly textured soft-touch finish rather than an old car dashboard. It feels very pleasant, and has a seriousness that offsets the bits you might call frivolous or flashy.

Other than being able to flip its screen around, the key appeal of the Yoga 900 design is its portability. At 1.3kg and 15mm thick, it’s thin and light for a 13.3in machine with an Intel Core i7 CPU. That’s 300g lighter and 3mm thinner than the 13in MacBook Pro.

It makes a fantastic work laptop to take on your travels: trust us, it’s what we’ve been using it for. The Yoga 3 Pro is even thinner and lighter, but that’s because it uses a lower-power CPU that can get by with passive (fan-less) cooling.

The Yoga 900 only has to trade away one major connection to get to its size too, an HDMI port. There is USB-C, as well as two USB 3.0 sockets and an SD card reader.

To top these off, the power connector can double as a USB 2.0 port, which is just as good as a USB 3.0 if you’re going to plug a keyboard, mouse or slow external hard drive into it. But, yes, if you want to use the Yoga 900 as something to plug into a monitor or TV a lot of the time, the lack of a standard HDMI port is a shame.

The Lenovo has a lovely-looking keyboard and, like any laptop of this size, uses full-size keys to ensure you don’t feel cramped. Typing on this thing is just as comfortable and quick as any other Ultrabook.

Don’t be fooled by the design, though. While it looks like the keyboard of a Lenovo ThinkPad, the key action/feel is definitely that of a thin and light laptop. There’s only a tiny bit of travel to the keys, so if you want that real deep, definitive feel, be sure to consider the ThinkPad X1 Carbon, too. Like most laptops at this price point, the Yoga 900 has a backlit keyboard.

The trackpad is that of a stylish, slim laptop, too: it’s reasonably large, has a high quality textured glass finish and builds its buttons into the surface rather than dropping them below. It feels great, and there’s a nice click to the button action that doesn’t require too much pressure. However, as is so common with Windows laptop touchpads, there’s an issue. Our Yoga 900 has moments where the cursor doesn’t respond to touchpad movements. This certainly seems to be a driver issue, so hopefully it’ll be addressed before too long.

Slick outer hardware will only get you so far. To justify a £1,500 price these days, a laptop needs a seriously impressive screen. It’s 13.3 inches across, uses an IPS LCD panel and offers a resolution of 3200×1800 pixels. For a bit more context, where Full HD gets you just over two million pixels, this one offers 5,760,000. Pixel density is an impressive 276ppi, which wouldn’t be too bad for a phone and is fantastic for a laptop. Get up close and you can see a tiny bit of fuzziness, which seems to be due to rows of pixels being slight offset from each other. But you do have to get up close to see it.

One other that’s thing more likely to become an annoyance is how reflective the Yoga 900 is: very. If you like working in the outdoors, you’ll have to whack up the brightness. However, the only way to really mute this issue is to get a matt screen laptop, and that means sacrificing the touchscreen, too. It wouldn’t make sense in a flexible laptop like this. The touchscreen matters.

Image quality is good, although in some respects not among the best-in-class. It hits just 92 percent of the sRGB colour gamut when you’d really expect full 100 percent coverage for the price, and at mid-level brightness settings it can look like the screen’s blacks are raised, that the luminescence of the backlight is quite obvious.

However, compared to something like the Toshiba Radius 12, the screen architecture is slim, meaning there’s no major greyish tone to the screen surface itself. This crops up in touchscreen laptops where there are tiny air gaps between the touchscreen and display layers.

The main difference between the Yoga 900 and its predecessor the Yoga 3 Pro is that instead of an Intel Core M processor it uses an Intel Core i7 (or i5) chip. The difference is that while the Core M series’ focus is on efficiency and small chipset size, the Intel Core i7 isn’t as willing to sacrifice power.

As we’ll see later, thanks to improvements in the latest Intel Skylake CPU architecture, this doesn’t mean stamina needs to be rubbish either. In this generation of CPUs, Intel slimmed down the transistor size from 20- to 14nm, designed to improve efficiency.

Other important upgrades include the 512GB SSD and 16GB RAM. Entry-level models exist with smaller SSDs and 8GB RAM, but for most uses the single-app performance is going to be pretty similar. An extra 8GB RAM will give you greater scope to run more apps without the thing complaining, though.

Being a dual-core laptop, it’s designed for light and nimble use rather than the sort of CPU-punishing number-crunching involved in, for example, video editing. However, unless your demands are great you probably won’t notice too much difference. It scores 2297 in PC Mark 8 Home and 6827 in Geekbench 3.

The Yoga 900 has no dedicated gaming hardware though, so you’ll only be able to play less demanding games without seriously paring back the resolution and graphics settings. It fails to do justice to Thief, rendering at an average of 20 frames per second at 720p res, low settings. The slightly less demanding Alien: Isolation clips by at 27fps using similarly reduced settings. You can only really play fairly old games on the Yoga 900, and we got better results from the cheaper HP Envy 13.

Its stamina doesn’t disappoint, though. Left to play a 720p video on loop at 120cd/m2 screen brightness it lasts 11 hours 20 minutes. Using it more naturally as a regular laptop, to browse the web, send emails and do work, we found it should last 7.5 to 8 hours, making it a satisfying all-day workhorse. That it manages this with an Intel Core i7 rather than the lower-powered Core M is a bonus.

Finishing off with one of the Yoga 900’s less attention-grabbing features, we come to its speakers. Their performance shifts, depending on how the laptop sits. Sat which its backside down like a laptop the sound isn’t that great, as the drivers are essentially firing right into the surface. However, it really opens up when you sit it in its ‘tent’ position, giving the speakers more room to breathe.