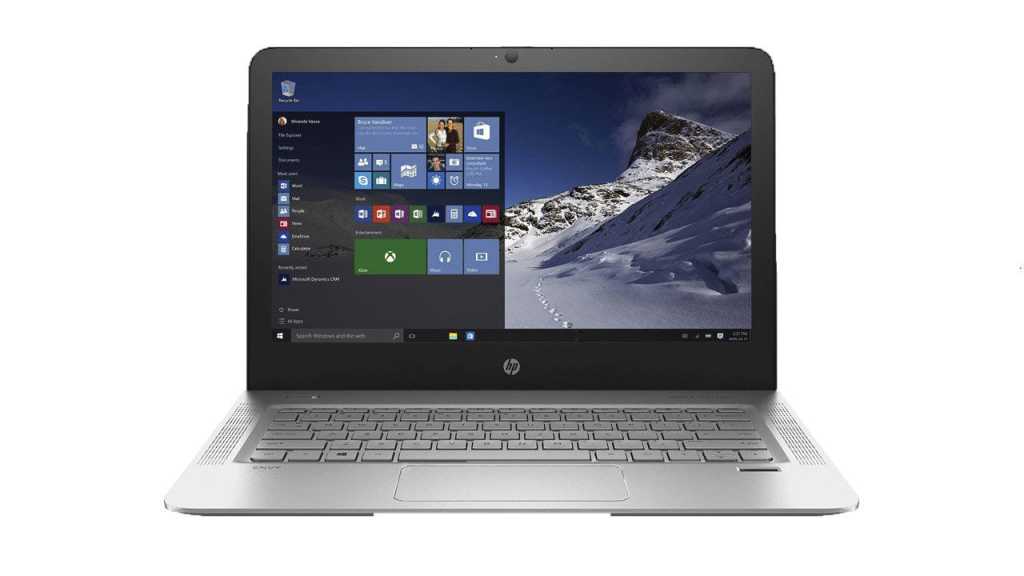 The HP Envy 13 gets a lot of things right. The design, the trackpad, the performance and the screen are all very good. Using this laptop is a real delight in most respects, its physical portability is fantastic and it has clearly been designed with a sensible budget in mind. It’s a good buy. There are a few issues, though. Unless use is very light, battery life is disappointing and the build quality is slightly less impressive than it at first appears – there’s some flex to the body, making it a bit less luxurious than you might expect looking at photos. Given the excellent combination of features, performance and value though, it’s only the battery life you need to really stop and think about before buying. The Asus UX305 lasts longer, and while that laptop lacks a backlit keyboard and some of the HP’s raw power, that might be enough to justify switching teams.

Laptops such as the 12in MacBook and Dell XPS 13 are pretty portable, but you’ll struggle to find a computer with a decent-sized screen that’s more portable than the HP Envy 13. It’s incredibly slim and light, and doesn’t cost the earth either. It’s like a MacBook Air, but with more up-to-date hardware. Surprisingly enough, it has power too, using the same dual-core Intel Core i7 CPU you’ll find in larger, pricier laptops. Only battery life holds back this otherwise delightful laptop. And even that isn’t too bad, so keep reading. See also: 20 of the best laptops you can buy right now

Our review unit (Envy 13-d002na – part no. N7K53EA) sits between the two, with an Intel Core i7 CPU and a 1080p display. This specification gets you the performance hit without the battery drain tax of a 4K display. Oddly, it’s hard to find, and we could only track it down on HP’s own site. Make you sure you consider these when choosing a laptop.

The Envy 13 is a sensationally petite little laptop, particularly for the price. The superstars in this area are the Apple MacBook, which is very expensive and somewhat impractical, and the Asus UX305, which is a true portable star.

HP has managed to put a bit more of a stamp of distinct visual personality on this laptop than the Asus, though. This ultra-light system offers a mix of officiousness and cuteness: an unusual combo. What tells you this is an HP machine is that ultra-big, ultra?rounded touchpad, a staple of the company’s most luxurious lifestyle laptops. It’s ultimately a very sensible, fluff-free machine, though. The hinge doesn’t limbo-lean back any further than normal (around 130 degrees), and it doesn’t have a touchscreen.

The frame is full aluminium, getting you the sort of feel that a few years ago you’d have paid at least £1,000 for. There’s a little bit of flex to the shell, in particular the little strip beneath the touchpad, that tells you it’s not tremendously thick metal, though.

It probably wouldn’t have been able to slim down to 12.9mm thick and 1.23kg with thick stuff, and its pricing is keen too. We’ve been reviewing a lot of larger laptops recently, but switching to this was truly refreshing. Holding it is like grasping a slim pad of A4 paper.

The only surface-level design issue is it’s a bit odd to use on the knees, as it is the back of the lid that rests on them, not the bottom of the laptop. At least it’s light enough not to cause much discomfort.

The HP’s connections aren’t very forward-looking, though. You get a respectable three USB 3.0 ports, a full-size HDMI socket and an SD card slot, but no USB-C connector. We’re starting to see these on the majority of pricey laptops, and they’re soon to be very important as non-Apple phones are due to use them instead of Micro-USB.

This is about as close to no-frills as an all-aluminium, good-looking laptop is going to get these days. The only part many of you might want to think about is the frame flex. USB-C isn’t yet vital. And those who care about security will be happy to see a Kensington lock port and a finger scanner, which is usually reserved for boring?looking business laptops, but here is lets you use a bit of software called SimplePass to manage your passwords.

The Envy 13 has a classic Ultrabook keyboard. It’s shallow but crisp, and typists will appreciate just how little HP has messed with the key layout. The Shift and Backspace keys haven’t been shaved down to nubs, making the transition to this from a larger keyboard very easy. Only the top line of keys is slimmed-down, and they are F-key shortcuts that you’re not going to need to work into an essay or email.

We’re glad to see HP has managed to incorporate a keyboard backlight at the price, too. The Asus UX305 doesn’t have one, and it makes typing/gaming in dark places way easier. It’s a blunt object backlight though, being rather bright and lacking the intensity gradations you get in laptops costing, say, a couple of hundred pounds more. You’ll want to turn it off when it’s not strictly needed.

The HP Envy 13’s trackpad is unusual, and something HP has really made its own. While it doesn’t have much vertical height to play with, thanks to the placement of the keyboard, it really makes use of the laptop’s width. This thing is wide, and it gives your fingers plenty of room to play with. Just as the keyboard backlight isn’t necessarily expected at this price, neither is the Envy 13’s high-end textured glass trackpad surface. It feels fantastic, getting you just the right friction and a non-tacky finish to glide across.

The trackpad ranks among the best you can get in a 13in Windows laptop. Its click action is as well-handled as the pad’s surface, and we had no issues with juggling left/right button commands. That may sound silly, but trackpads can be a nightmare in Windows machines.

This one integrates the buttons into the pad with just a tiny dead zone at the top, and you can right-click by either tapping with two fingers on the pad (like a MacBook) or tapping the far bottom-right of the surface (like a trad. Windows laptop). Looking closer into why this works so well, it seems to be down to about 85 percent of the pad being ‘left-click’ territory. And that it feels fantastic, of course.

There is a hi-res version of the HP Envy 13 (not quite 4K at 3200×1800 pixels), but we’re taking a look at the 1080p model here. Given the upgrade is £150 (and that includes a CPU bump), we don’t expect to see a radical improvement in the quality of the screen panel used. What you get here is perfectly good, though. As with the slightly flex-happy aluminium frame, it’s good, if a little off the quality you get from a £1,000-plus laptop.

The Envy has an IPS LCD screen that can hit 92 percent of the sRGB colour spectrum, which is enough to avoid appearing undersaturated but won’t please everyone who needs to, for example, edit photos or images at a professional level. HP has done its best to pull everything it can out of the hardware, though, with a very good Delta E of 0.17. That means that while the screen isn’t capable of delivering the deepest of shades, those it can handle will look very accurate.

More anecdotally, it’s a very pleasant screen, particularly for use in environments where you don’t have control over the lighting. The HP Envy 13 has a matt screen finish, which diffuses reflections to make using it in a brighter locale practical.

When looking at a laptop of this sort of price and design, the Asus ZenBook UX3051 has been an easy one to recommend. However, the HP Envy 13 offers a lot more power than that model. You get an Intel Core i7-6500U CPU (Core i5 spec also available), where the Asus rival uses a Cortex M CPU. This is a Skylake processor, a dual-core model designed for slim laptops like this, but still a bit of a surprise to see in something this thin and light.

Day-to-day performance is excellent, but that comes down to the RAM and storage as much as the CPU. The Envy 13 has a 256GB SSD and 8GB RAM, enough to get you a similar zippy feel as any £1,500 Ultrabook. Its limits are much less restrictive than those of a Core M laptop, too. More demanding tasks such as photo- and video-editing are well within its remit. And it’s not going to start chugging as soon as you start opening up one too many Chrome tabs. The price/performance ratio is great.

Bear in mind that the Envy 13 only offers integrated graphics, with an Intel HD chipset. Despite big annual upgrades in Intel’s integrated graphics chipsets, you’ll need to run most games of the past five years at ‘low’ settings to get frame rates that won’t make you want to quit. For example, Thief is only just playable at its lowest settings, at 720p resolution, clocking in at 23fps. Alien: Isolation is better, though, running at an average of 32fps at 720p, low settings. Dig further back into games from, for example, five years ago and you should be able to play plenty at 1080p, low settings.

In one respect it does seem like the Intel i7-6500U has been crammed into this ultra-skinny shell, though. The fan runs all the time, and it’s definitely audible in a quiet room, even when just playing back a 720p video: hardly a demanding task.

If there’s any significant ambient noise, you won’t notice it, though. Even office air conditioning should be able to drown it out. It does seem that HP uses careful CPU throttling despite the fan. In Geekbench 3, we achieved only a score of 4261, even though the CPU should be able to reach around the 6000-point mark. That the PCMark 8 scores isn’t similarly effective suggests the CPU can step up when needed, though.

The cost of the ‘proper’ Intel Core CPU continues with battery life. While HP says the Envy 13 will last for “up to 10 hours”, we didn’t see anything close to this. Playing back a 720p movie on loop at 120cd/m2 brightness, the Envy 13 lasts for eight hours, five minutes.

To get a real-world take on its stamina, we tried using the Envy 13 as our main work PC for a few days. The results really varied. You’d ideally want a slim ultraportable laptop like this to last through a day’s work, but the Envy 13 doesn’t manage that unless your demands are low. With Wi-Fi turned on, a phone plugged in to charge and brightness set to 20 percent (all that’s needed thanks to the matt screen), it lasts for just 4.5 hours. However, if you use Wi-Fi less and don‘t try charging any devices, you can get up to six hours off a charge.

It can last a good amount of time, but at the mid-level usage most people are going to need, stamina is a bit disappointing when it’s a real strength of some laptops in this class. It’s a very important aspect of a laptop like this.

Despite wearing the Bang and Olufsen audio brand logo like a badge of honour right on its keyboard surround, the speakers are disappointing. The big issue is there’s pretty obvious distortion at top volume, suggesting this is really little more than a branding exercise. Avoiding distortion would be a top concern of any audio company