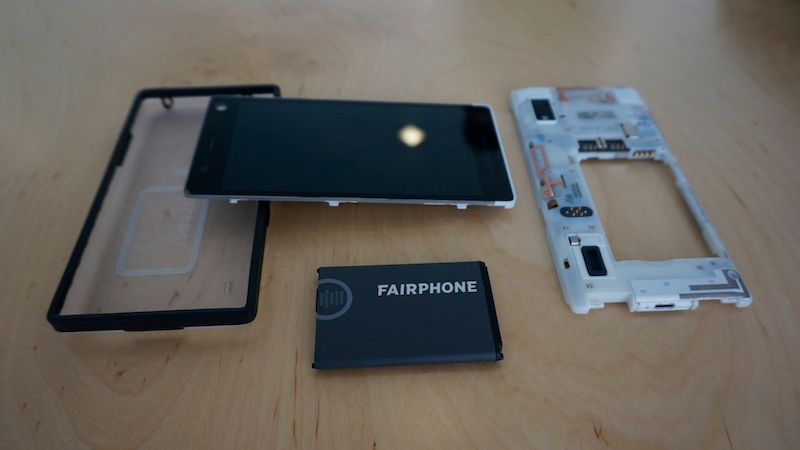 The Fairphone 2 is a truly exciting smartphone with its modular design that means you can easily repair it yourself so it lasts longer than a regular handset. The current device doesn’t have outstanding specs so won’t appeal to power users but when you can upgrade parts things will be very different and we can’t wait.

The Fairphone isn’t a brand new device but we’ve managed to spend some time with the modular smartphone at MWC 2016. Here’s our Fairphone 2 hands-on review.

If you’re wondering why it’s called the Fairphone it’s because the firm, which started out as a campaign, is trying to create an ethical device. Aiming to source minerals needs from the best and fairest sources while improving the supply chain. The firm recently collaborated to create the first-ever fairtrade gold supply chain within the electronics industry.

“We want you to understand where your products come from, so we’re tracing our materials to their source and making improvements in the supply chain along the way,” says Fairphone.

You can already buy the Fairphone 2 but we hadn’t had a chance to see it in the flesh until MWC 2016 where the firm showed off a version with Jolla’s Sailfish OS. However, it’s unknown when this will be made available so for now it’s Android only.

Fairphone 2 review: Price, release date and where to buy

Laucnhed for pre-sale in mid-2015, the Fairphone started shipping to backers in December but you can quite easily get hold of the Fairphone 2 via the official store for €529 or through The Co-operative Mobile with a deposit of just £30.

The price might seem quite high when you look at the specs but this is the first modular smartphone and it’s different to buying a regular handset. The idea is that after the initial investment price you can easily do things like replace and upgrade parts instead of splashing out on a completely phone. Unlike most phone makers you can see a detailed breakdown of the price.

Fairphones parts shop for the device has bits which you can swap in for as little as €1.20 with parts for the second generation starting at €20.

Fairphone 2 review: Design, build and how you replace parts

The Fairphone 2 is pretty unassuming from the front, it looks like many other smartphones. However, through the semi-transparent rear cover – available in different colours – you can see that this phone is different to the rest.

Instead of using something like a metal design which you’ll want to buy a case for in order to protect it from scratches, the Fairphone 2’s case is hard wearing. In fact, CTO Olivier Hebert repeatedly dropped the demo devices during our briefing.

Although the Fairphone isn’t going win any beauty awards, that’s not the aim. Once you take the cover off – it wraps around to the front – things start to get exciting. You can easily access the SIM-card- and Micro-SD slots and remove the battery but that’s just the start.

You can remove the screen with no tools whatsoever. Simply flick the two blue switches at the bottom and the display comes out easily meaning you can fix it yourself if it breaks. A new one for the Fairphone 2 costs €85 which might sound a lot but it keeps your device in working condition with minimal hassle with a good cause behind it, too.

Being able to replace the screen so easily is really cool but you can do even more. With the screen off you can get access to the motherboard of the phone where there are various modules. Blue circles highlight which screws you need to remove so you don’t have to be an qualified engineer or anything, plus the firm has a created videos if you do get stuck.

On the Fairphone 2 you can easily remove the camera module and top and bottom modules. The one at the top contains things like the receiver, sensors and front camera. Meanwhile, the bottom module houses the speaker, vibration motor, USB connector and primary microphone.

They cost €35, €25 and €20 respectively and currently are just for replacing broken parts. In the future you’ll be able to upgrade with newer and better parts which is what really excites us.

This does mean that you can’t replace something core like the processor but that might well be a feature of the next generation device. The firm told PC Advisor that the Fairphone 3 release date would be during 2017.

So for €529 you can buy a smartphone which you can easily fix yourself but what do you actually get for your money?

Well you get a 5in Full HD screen, Qualcomm Snapdragon 801 processor, 2GB of RAM and 32GB of storage. As mentioned earlier there’s a Micro-SD card slot and dual-SIM slots.

On the software side is stock Android 5.1 Lollipop and we found it to run very smoothly during some hands-on time.

Overall it’s not a particularly exciting package, especially when you compare it so some new devices which have been announced which are a similar price. For example, the LG G5 is set to be £499 so it can’t compete in a hardware battle.

What you’re really buying is the uniqueness of the modular design and everything which comes with Fairphone’s commitment to conflict-free mineral sourcing and changing the supply chain for the better.