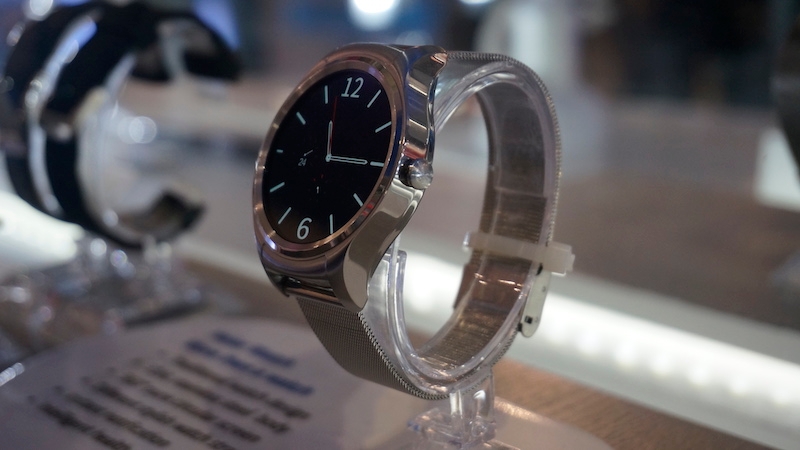 The Haier Watch is one of the surprise wearables of MWC 2016 with is gorgeous design (although it does seem like s Huawei Watch copy to some extent) and impressive specs. All for a cheaper price than rivals but we’re keen to see how running regular Android works day-to-day in terms of installing any app you want before giving it our full approval.

Haier is a Chinese appliance brand which you might not have heard of but it’s pushing more and more into consumer tech. At MWC 2016 it has launched a range of smartphones and a smartwatch. Here’s our Haier Watch hands-on review. See also: Best smartwatches.

The Haier Watch is certainly one of the surprise wearables at MWC this year and it will be launching across in Europe in April with a price of €200 which is cheaper than a lot of rivals. Also see: Huawei Watch 2 rumours

The design of a smartwatch is a key element since it’s more of a fashion item than other tech devices like a smartphone. It’s also important because smartwatches don’t differ in specifications very much.

Haier has done a decent job here with an attractive looking smartwatch. It does look pretty similar to the Huawei Watch and, to a lesser extent, the ZTE Axon Watch which was also announced at MWC.

Like some rivals, the Haier Watch is made from stainless steel (316L which is the same as Huawei’s) and is available in a range of colours including silver, black and gold with a choice of different straps, too – silicone, leather and metal.

That’s quite typical and means you’re likely to find a combination which suits your taste. We’re impressed with the premium feel and build quality of the Haier Watch which is up there with some of the best smartwatches we’ve seen.

An IP56 rating means the Haier Watch can deal with splashes of water but most rivals have a higher IP67 rating.

There are more similarities to the Huawei Watch when it comes to hardware starting with a 1.4in touchscreen which uses a decent 400×400 resolution. The display is fully round so doesn’t have the drawback of what’s been dubbed a ‘flat tyre’: a small section at the bottom being cut off like on the Moto 360.

Although the screen looks great, we found it overly sensitive during our hands-on time. It repeatedly registered the beginning of a swipe as a touch so we kept navigating where we didn’t want to go. This happened on both the samples we tried but fingers crossed it’s because they are early testers.

The Haier Watch surpasses many Android Wear rivals by having 1GB of RAM and 8GB of internal storage. That’s double what we’re used to seeing. It also features a 9-axis G-sensor and a heart rate monitor which sits on the back.

As you would expect, the Haier Watch uses Bluetooth 4.0 to connect to your phone and also has a microphone so you can take advantage of voice input. There’s also a speaker, too.

What’s interesting and quite different about the Haier Watch is that is doesn’t run on Android Wear. Instead it runs on regular Android 6.0 Marshmallow but it has been modified to fit the watch screen, of course, with Haier’s own interface.

You can flick between watch faces by swiping and apps are laid out in a grid rather than a list. Haier pre-installs its ‘intelligent health management’ system which does things like counts steps, calories and such like.

We were able to get around the device’s software fairly easily as the navigation is essentially the same as Android Wear. The bigger difference is that you’ll be able to install apps from the Google Play Store. How well this works remains to be seen, though.