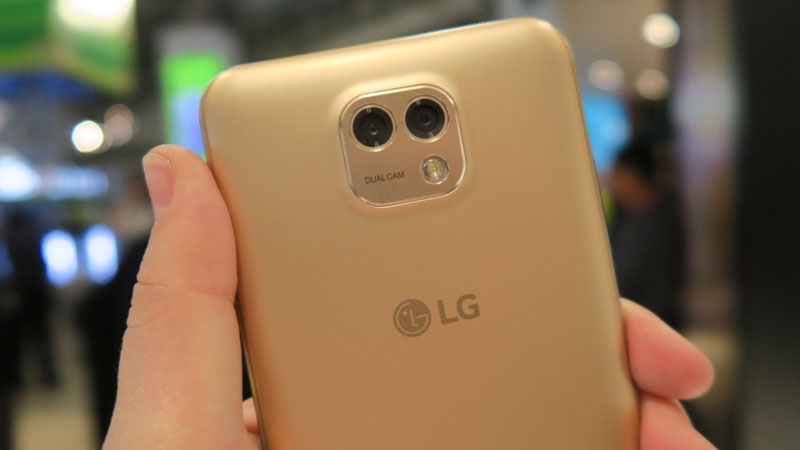 LG has taken an interesting approach with its new X phones, and at the right price they could prove to be popular among those looking for a mid-range phone that offers something to make it stand out from the ever-growing crowd. It’s a shame that they’ve adopted a cheap-looking plastic design though. It’s tricky to say which we prefer, though. We’d have loved the X screen if the main display was Full HD like the X cam, but for some the extra screen is probably more of a gimmick than a real boon. The X cam’s wide-angle lens, however, really could come in handy if you do a lot of travelling and want to capture photographs of vast landscapes for example. We’ll hold off our final judgement until we’ve spent some more time with both phones in our labs, though.

LG is taking an interesting new approach in the mid-range smartphone market by launching two new phones with mid-range specs and price tags but one standout flagship feature each. The LG X cam has a dual camera while the X screen has (you guessed it) a dual screen feature. We spent some time with both devices at MWC 2016, where they were being shown off alongside the new flagship LG G5. Here’s our LG X cam and LG X screen hands-on review.

After announcing the new X cam and X screen just ahead of their official launch at MWC 2016, LG revealed that the phones will arrive in Europe in March, so expect to see them hit the shelves of carriers soon. So far pricing information is vague, but we’re expecting to see them come in at between £300 and £400 after LG said that they’d rival the price tags of other mid-range phones. 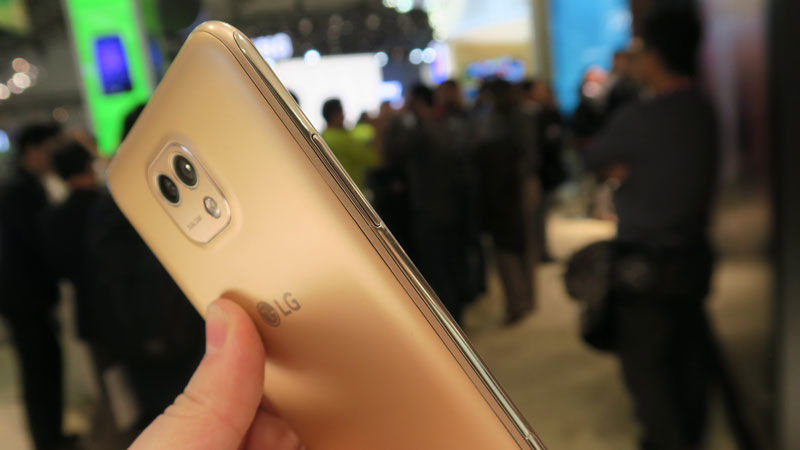 The first thing we noticed when picking up both of these phones is how light they are. It almost feels as though they’re toys, even more so when you notice that the X cam (above) is made with a metallic plastic and the X screen (below) is made with a tacky, shiny plastic a bit like the Samsung Galaxy S7. We’re not the biggest fans of the overall design of either phone. The plastic makes them look cheap and they’re a bit on the creaky side which would make us concerned about carrying them in the pocket of our jeans. 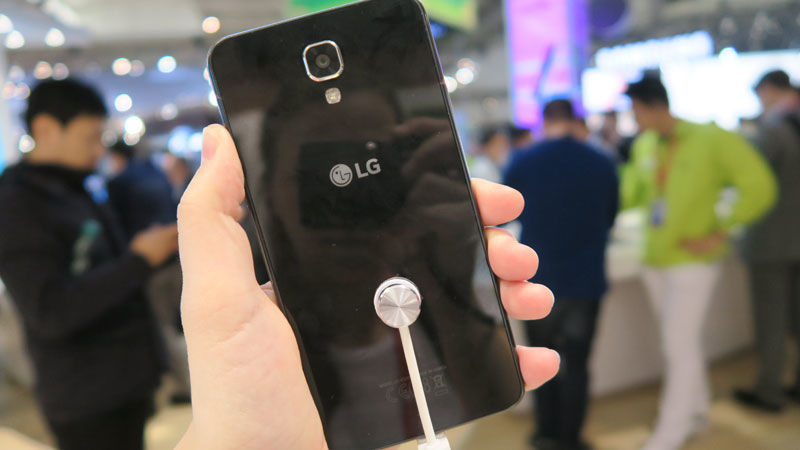 Each is available in a stylish white and garish Pink Gold, but there’s also a Black model of the X screen available which was our favourite out of the options available, and a Titan Silver or Gold model of the X cam, of which we prefer the former.

You’ll notice that the back of the X cam sports the dual camera in a very slightly protruding portion in the centre of the phone, while the X screen has a little portion of additional touchscreen at the top, right beside the front-facing camera. We’ll talk more about what each of those flagship features brings to the table below.

Let’s start by taking a look at the X cam’s features. The standout feature is of course the dual camera setup a lot like the one found on the new LG G5. One camera is the main 13Mp snapper, while the second one sitting right beside it on the rear of the phone is 5Mp but can capture a lot more in one thanks to its wide angle, ideal for landscapes. The only downside to the wide angle (aside from the lower pixel count) is that it’s slightly warped. You’ll notice that straight lines become curved in a sort of fish-eye effect. 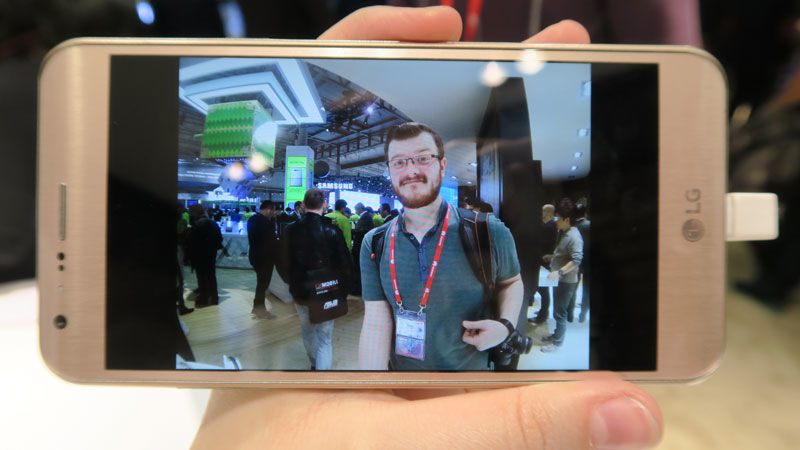 It’s easy to choose which camera to capture with thanks to LG’s camera app, which has a simple button on screen that lets you alternate between the two.

There’s also an 8Mp camera on the front for selfies, situated just above the phone’s Full HD 5.2in screen that has slightly curved edges for a smoother finish that feels nice in the hand and means that at its thinnest point, it measures just 5.2mm (it’s 6.9mm at its thickest which is still delightfully thin). 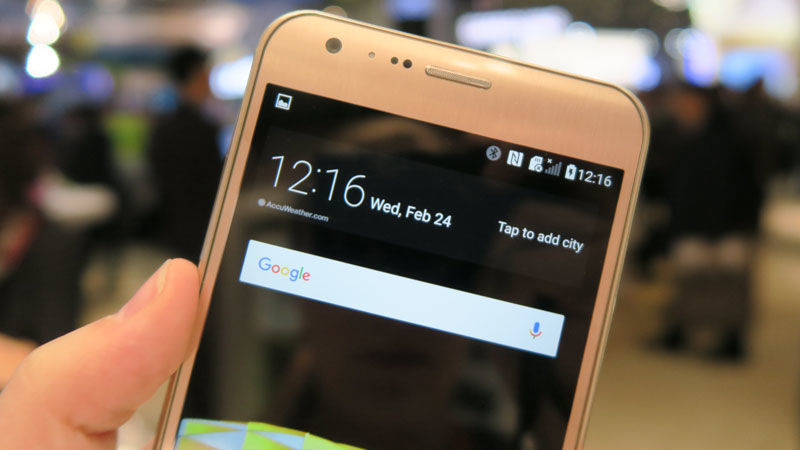 Inside is a 1.14GHz Octa-core processor paired with 2GB RAM which should prove to be pretty speedy for most tasks you’ll throw at it. It performed well during our brief time with it on the show floor but we’ll bring you our full benchmark tests when we get one back to our labs for further testing. 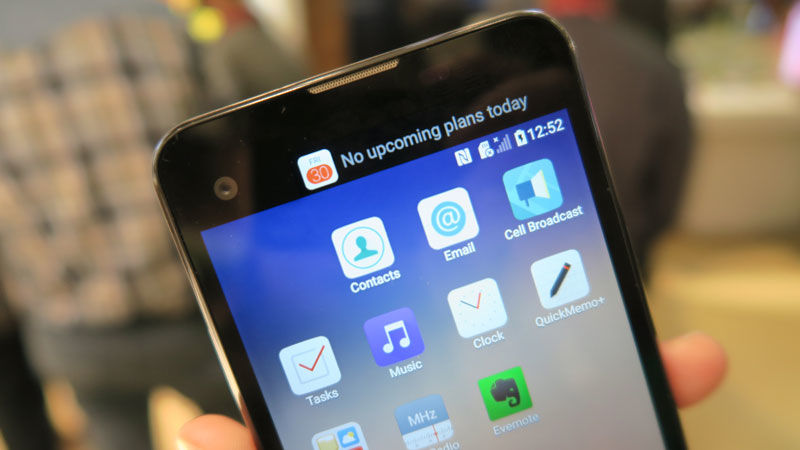 Meanwhile the X screen’s standout feature is its little secondary display situated just above the main 4.92in screen. It’s just 1.76in and acts a bit like the Edge of Samsung’s flagships in that it offers quick access to your favourite apps, music playback controls, notifications, calendar appointments and more.

This isn’t the first time we’ve sen a screen just like this on an LG phone. Last year we saw the V10 launched by LG with a similar dual-screen setup, but it launched in Asia and it has been confirmed that it won’t be coming to the UK, so we’re pleased to see that we still get the feature on a phone that is coming to the UK market. 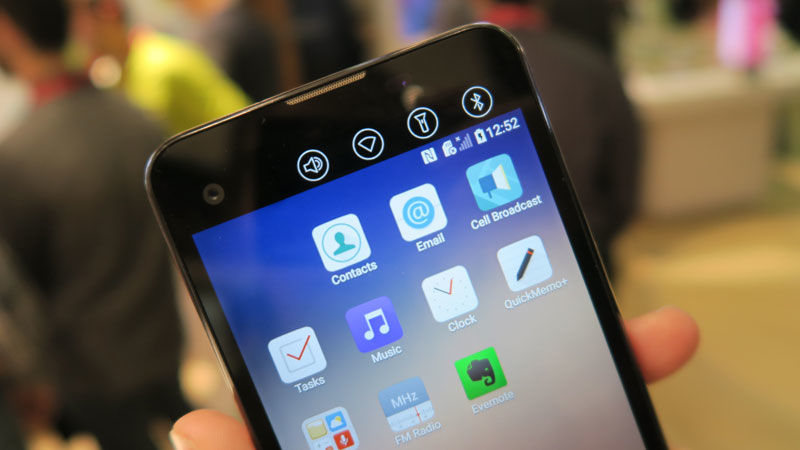 We were quite impressed by how responsive the secondary display is, and how it changes depending on the app you’re using and the apps you use most regularly. For example, when you’re using the camera app it’ll display the different mode options available, and each time you open a new app a miniature version of its icon will spring to the front of the scrollable icons there. You’ll be able to see four icons at any one time, and if you scroll to the left you’ll get quick access to tools and settings a bit like Apple’s Control Centre. 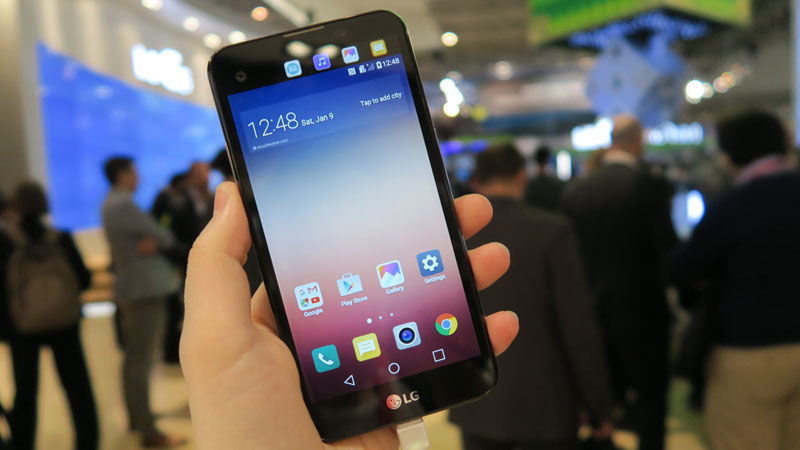 The downside to the X screen is the main screen, which has a resolution of 1280 x 720. For a phone with screen in its name we’d have hoped for a Full HD screen, but that may well have pushed the price above the mid-range it’s aiming for.

Inside the X screen is a 1.2GHz Quad-core processor with 2GB RAM rather than the Octa-core powering the X cam, but there’s still a 13Mp camera on the rear and 8Mp on the front.

In both phones you’ll find 16GB of built-in storage as well as an SD card slot for adding more space, and both run Android 6.0 Marshmallow but with a few tweaks including the removal of the app drawer. Instead you’ll have to spread your apps across your home screens instead.