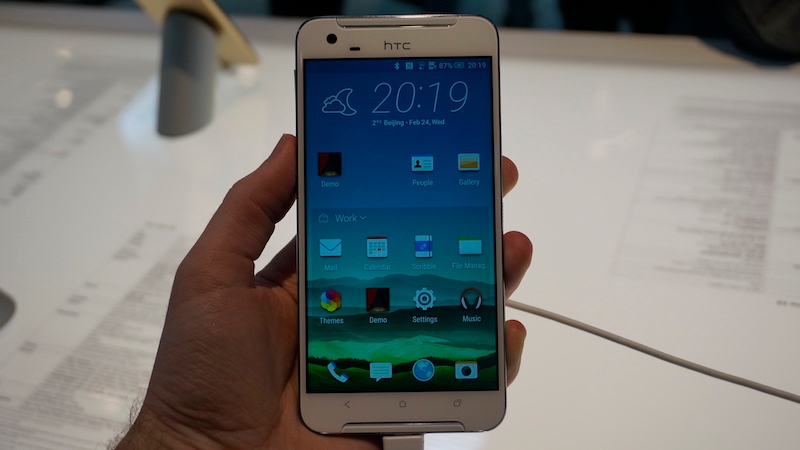 Although there’s a lot to like about the HTC One X9, it’s not the flagship phone we were hoping for. It’s a sort of mash up of a few different previous phone from the company. A larger phone with some decent specs will appeal to some but we’re holding out for the One M10.

HTC didn’t announce the One M10 at MWC 2016 but it did launch a new flagship Android smartphone. Here’s our HTC One X9 hands-on review from Barcelona. See also: 20 best smartphones

The One X9 was originally launched in Asia back in December but at MWC, HTC has announced a global version of the smartphone so here’s what we think after taking a closer look.

As for when the One X9 will be released and how much it will cost, we don’t know just yet. For now we’ll focus on what it looks like and what kind of specs are on offer.

While the HTC One A9 was heavily criticised for being too similar to the iPhone 6S, the One X9 has less of a problem – although it shares some design traits with its smaller brother.

The back still has a look and feel akin to the A9 with its aluminium uni-body but the top has a strip for the camera a bit like the Nexus 6P. From the front the phone looks quite different to previous HTC phones thanks to off-screen capacitive buttons and angular lines for the front facing speakers which look a bit dated to us.

If you’ve been thinking HTC phones are too small for your needs then the One X9 might suit. With a 5.5in screen it’s bigger than the One M9 and One M8. An decent screen-to-body ratio of 71 percent means the handset isn’t too unwieldy.

HTC has kept the thickness down at 8mm but the size does mean the One X9 is fairly weighty at 170g. It’s by no means a brick and we’ve seen plenty of heavier phones but it might put some people off.

That aforementioned 5.5in screen uses a Full HD resolution which is a shame considering HTC has done this on the One M9+. That said it’s not the end of the world and the screen is high quality.

Instead of a Qualcomm processor, the One X9 is powered by a MediaTek Helio X10 octa-core chip and 3GB of RAM. There’s 32GB of internal storage and a Micro-SD card slot for adding up to 200GB more.

There’s no fingerprint scanner as found on the One A9 but the X9 does bring back BoomSound front facing stereo speakers for those that like pumping out some tunes on the go without carrying a Bluetooth speaker.

As far as we can tell, the camera is the same as the One A9 which we were impressed by. It’s 13Mp with an f/2 aperture, optical image stabilisation and a dual-tone LED flash.

The battery is a health 3000mAh in capacity but unlike the LG G5, it cannot be removed.

On the software side of things the One X9 matches up with the One A9 running Android 6.0 Marshmallow with HTC Sense which is the firm’s own user interface.

It features things like HTC’s own notification bar and a Flipboard news feed a swipe away from the homescreen. There’s also HTC Home, a widget which displays the apps which it thinks you need the most for places like work and home.