Based on our limited time with the Alcatel Idol 4s, we’re impressed – especially if the rumoured price point becomes a reality. The QHD display is absolutely gorgeous, and the smartphone has come leaps and bounds since the days of the plastic Idol 3. It’s an extremely capable smartphone and one that we think deserves more recognition at MWC – it even comes with a free VR headset that’s remarkably similar to Samsung’s £80 Gear VR. We’ll bring you a more thorough verdict once we get a sample back to the PC Advisor Towers!

While the Samsung Galaxy S7 and LG G5 seemed to have stolen the headlines for the majority of MWC 2016, Alcatel’s latest mid-range smartphone deserves some attention. The Alcatel Idol 4s is a mid-range smartphone with a premium design, and even ships with a VR headset in the box. We went hands on with the Alcatel Idol 4s at MWC 2016, and here we discuss its release date, pricing, design, features and software. Read next: Best smartphones of 2016

The big question is when will we be able to get our hands on Alcatel’s latest mid-range smartphone, the Alcatel Idol 4s? Alcatel has confirmed that the Idol 4s will be available to buy in Q2 of 2016, with rumours floating around the Internet suggesting that a June release will be likely. Also see: Best new phones, tablets, laptops & more at MWC 2016.

Unfortunately, there isn’t much in the way of UK pricing available just yet, but it’s said that the Idol 4s will cost around 450 euros, which should hopefully equate to around £330-350. We’ll be updating this section with more information as soon as we receive it, so make sure you check back soon.

The Alcatel Idol 4s is a pretty sleek looking smartphone and is definitely a step up from the plastic-clad Alcatel Idol 3. In place of the plastic is a beautiful combination of glass and aluminium, which makes the Idol 4s look similar to premium flagship smartphones like the Galaxy S7, although it isn’t as comfy to hold as the Samsung flagship. With that being said, it’s not exactly uncomfortable to hold – we just think it’d do better with slightly curvier edges. In terms of dimensions, it measures in at a pretty lightweight 153.9×75.4×7 mm and weighs only 149g.

So, what flavours of the Alcatel Idol 4s will be available once the smartphone is released later this year? According to Alcatel, the 4s will be available in four colours; gold, dark grey, rose gold and metal silver – similar to Apple’s offering. We really like the look and feel of the Alcatel Idol 4s, because it looks like a premium smartphone but with a mid-range price tag. 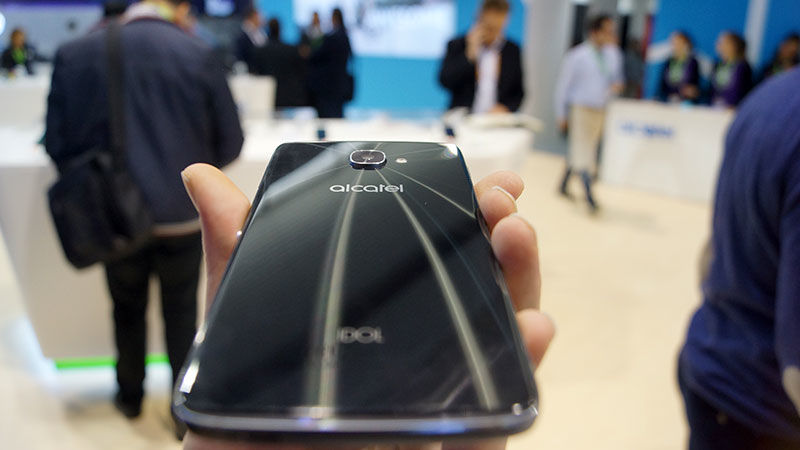 The Alcatel Idol 4s sports an absolutely gorgeous 5.5in QHD (2560×1440) AMOLED display that boasts a pixel density of around 534ppi. It’s incredibly bright and crisp and again, not a feature you’d expect to find with a mid-range smartphone. The crisp display (along with the rest of the smartphone) is powered by a Quad-core Snapdragon 652 processor coupled with 3GB of RAM and an Adreno 510 GPU, and we encountered no signs of lag when using the smartphone during our hands-on.

There’s a very good reason why the Idol 4s sports a QHD display and impressive internals for a mid-range smartphone – the box that the Idol 4 and 4s ships in doubles up as a virtual reality headset that can be used in a similar way to Samsung’s Gear VR. Just slot the Idol 4s into the viewer and pop the headset onto your head and you’ve got yourself a pretty decent VR headset.

The smartphone includes a dedicated VR store where you can browse and download a variety of VR-enabled games, pictures and videos, though unfortunately the Wi-Fi wasn’t working during our hands-on so we’re not too sure just how much VR content is available right now. The smartphone boasts either 16GB or 32GB of internal storage, with the option to expand the storage via the MicroSD card slot, which should be enough to store your VR-enabled content.

Read next: Hands-on with the HTC Vive Pre VR headset

The Alcatel Idol 4s also features a Boom Key on the right-hand side of the device, which serves as a multi-purpose button. You can use it to unlock the device, but that’s a tad tame – it can also be used to activate the camera and take a photo from the lock screen, take screenshots or open an app that you frequently use. Customising the button is key, and we hope that Alcatel adds more options for the Boom Key before it’s launched later this year. 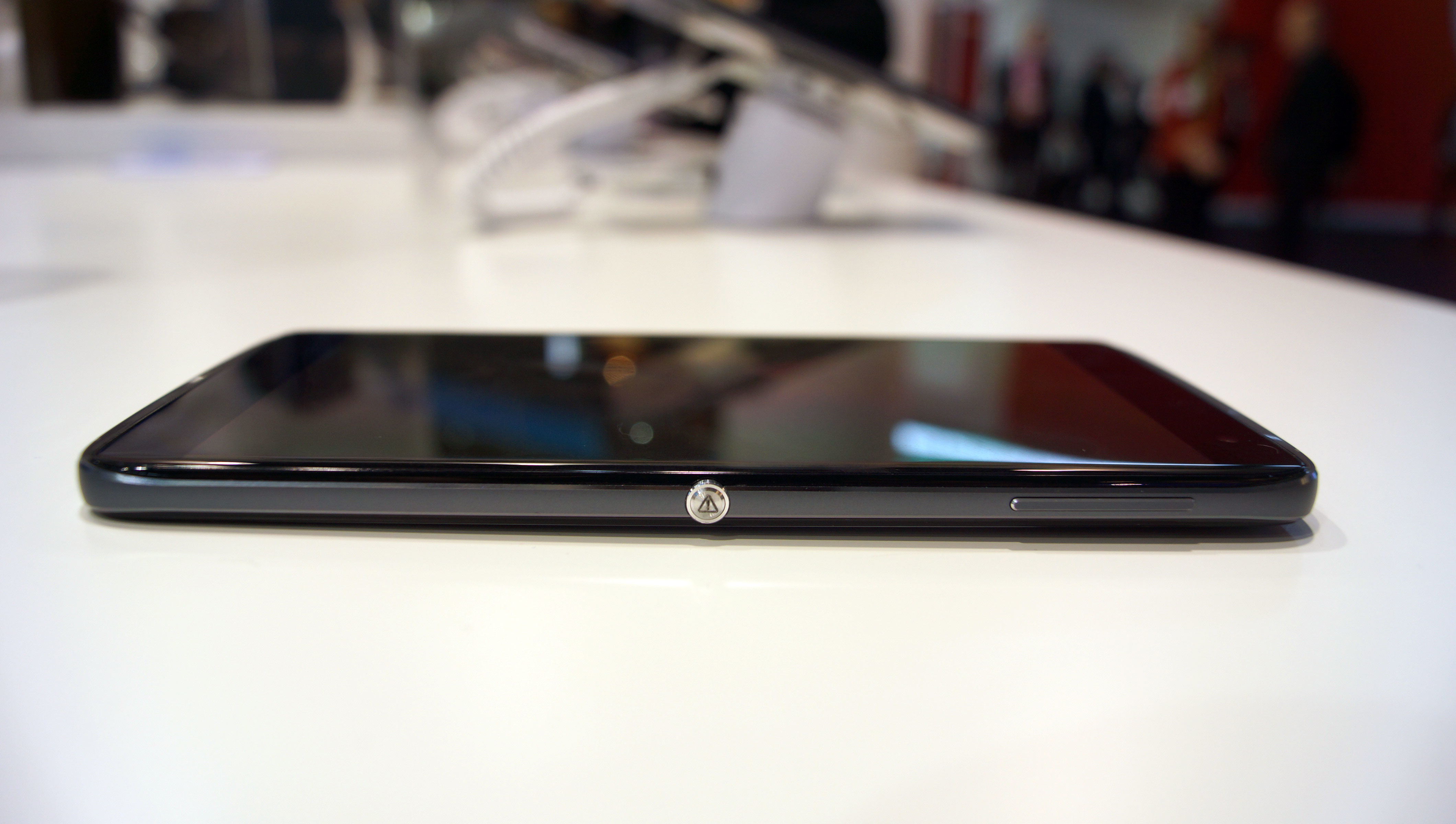 The Alcatel Idol 4s also sports a rather interesting audio setup. It uses a dual JBL speaker setup with speakers at the top and bottom of both the front and back of the smartphone. This means that even if your smartphone is face down, the audio should be just as clear as ever. We found the audio quality to be pretty impressive but as we were at a loud trade show during our hands-on, we’d like to try it again in a quieter environment in future to bring a more detailed description of the audio quality.

In terms of cameras, the Alcatel Idol 4s features a rear-facing 16Mp camera with a dual-LED flash. We took a handful of photos with the Idol 4s during our hands on and we weren’t completely blown away with the quality, as the colours seemed slightly washed out and the definition just wasn’t there. Although with that said, the lighting in the showroom wasn’t the best so again, we’ll try and get a sample in to the PC Advisor towers and test its camera out in a variety of conditions (light, dark, macro, etc). It also features a front-facing 8Mp camera with a built-in LED flash to illuminate your darkened selfies.

Read next: Best Android smartphones of 2016

In terms of software, the Alcatel Idol 4s will be shipping with Android’s latest operating system, Android Marshmallow. Although it isn’t a vanilla implementation of Marshmallow, as Alcatel has added a few extra features that we’re impressed with. The main addition to the software is its reversible design, which works in a similar way to iOS on an iPad.

We’ve all been in situations where we’ve unlocked our smartphones and realised they’re upside down, and while you’d usually rotate the smartphone to its regular view, that isn’t needed with the Idol 4s. The smartphone notices that it is being held upside down and completely rotates the display – yes, it’s a relatively simple feature but it’s a nice touch.