Aside from the interesting design, there’s nothing particularly outstanding going on with this entry-level smartphone. We’re actually pretty disappointed with the spec, as the Qualcomm Snapdragon processor and GPU used are featured in smartphones 2-3 years old, which is bad even for a budget smartphone. The cameras are okay for a budget smartphone, but the colour reproduction isn’t the greatest we’ve seen, even on a cheap handset. We’d say it’s a good choice for teenagers looking for a starter smartphone, but if you’re in the market for a smartphone that’s low-cost, good-looking but doesn’t have any bells and whistles, then there are better options available. Note: We’ve not yet received UK pricing for the HTC Desire 530 so it may be that the price tag is lower than we expect and will match the provided internals. We expect pricing to be announced within weeks, so make sure you check back soon as we’ll be updating the review once we know more.

HTC didn’t launch a new flagship smartphone at MWC 2016, but the company did introduce the HTC Desire 530, it’s latest budget smartphone. It looks like HTC is going after a young market with this smartphone, with ‘cool’ designs like paint splats, and a clip to be attached to a lanyard. The budget smartphone market is much fiercer now than it once was, with many big brands offering competitive low-end smartphones at even more competitive prices. With this being said, does the Desire 530 have what it takes? Read our review and find out. You might also like:  15 most anticipated phones coming out in 2016

The HTC Desire 530 is set to arrive in the UK in April, which could well coincide with the launch of the One M10, rumoured to be launching at an event in London then. Find out more about the  HTC One M10 rumours here.

The pricing for the 530 hasn’t been revealed yet, but the representative we spoke with at MWC 2016 hinted that it wouldn’t be much above 100 Euros. We’re expecting a price of around £120-150 based on previous Desire models, but we’ll update you with the official UK price as it emerges.

Read next: Best budget smartphones of 2016

The first thing you’ll notice about the Desire 530 is its design – whether that’s for the right or wrong reasons is down to personal preference. While at MWC 2016 we went hands on with a Desire 530 with a speckled back, which we think looks great. It’s not trying to be a premium, high-end smartphone with metallic plastic like other budget and mid-level phones do. Instead, it’s embracing the plastic and aiming squarely at a younger market with a fun, smooth plastic finish with flecks of colour. 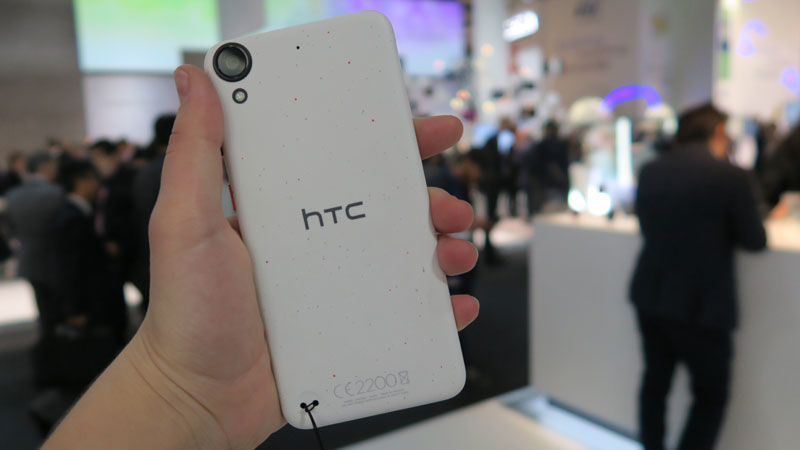 If that’s a bit too ‘loud’ for you then the more understated black and grey variation may be more to your taste. The first thing we noticed about the black and grey HTC Desire 530 was the red power button situated on the right-hand side of the smartphone – it’s the only part of the handset that’s red, and while black and red notoriously go well together, we think the placement is a little random. The alternate colour suggested to us that it may have a second function (like the Alcatel Idol 4S’s Boom Key) but sadly not, it only serves as a lock/power button. Also see: Best MiFi 2016.

The HTC Desire 530 features a 5in display without making the smartphone awkward to hold one-handed. In fact, its dimensions are extremely similar to the iPhone 6s, a smartphone with a 0.3in smaller display. The only real difference is that the HTC Desire 530 is a little longer than the iPhone, helping to accommodate the larger screen without making the smartphone so wide that it becomes uncomfortable to operate easily and comfortably.

You’ll find that the Desire 530 feels nice to hold with its smooth curved edges, and isn’t too heavy at 140g (only 11g heavier than the iPhone 6s), and measures 8.3mm thick. The plastic used on the rear of the case has a matte effect that makes it comfortable to hold and a little easier to grip, but the downside is that it shows off fingerprints a little too easily for our liking. The HTC Desire 530, like many other smartphones on the market (both budget and high-end) suffers from the notorious camera bump, and due to a large lens, this is more obvious than with other smartphones. 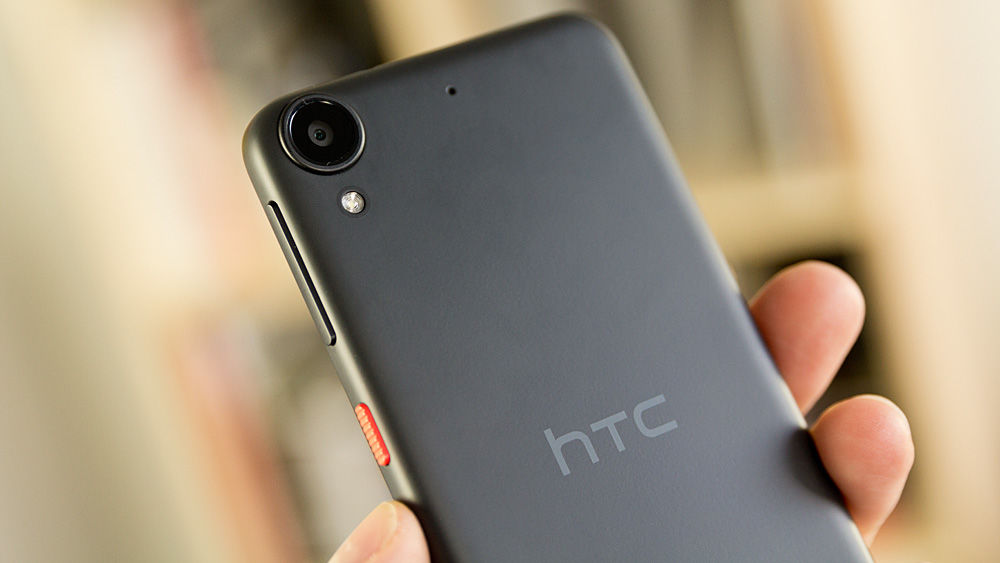 Sadly, the rear cover is non-removable which means that you won’t be able to swap out the 2200mAh battery, a make-or-break feature for some Android users. This also means that the SIM and MicroSD card slot are featured on the left-hand side of the smartphone underneath a rather awkward to open flap (we actually thought we were going to break the phone before we got it open!).

There’s also a little hole in the bottom right corner of the back case for a wrist strap, similar to those Apple added to its iPod touch models, another hint that HTC is aiming at a younger market here.

Read next: Cheapest 4G smartphones of 2016

The screen on the HTC Desire 530 is 5in, which we think is just about the sweet spot of screen sizes on smartphones, and as mentioned above, it’s easy enough to use one-handed. It has a 720p resolution (1280×720) with a 294ppi pixel density which makes for a reasonably crisp display, which we’ve got no quarrels about for an entry-level device. It’ll suffice for mobile gaming and catching up on the latest TV shows, but don’t expect to be blown away in terms of quality. The display is bright enough for indoor use, but it’s not quite bright enough to be used effectively in direct sunlight. 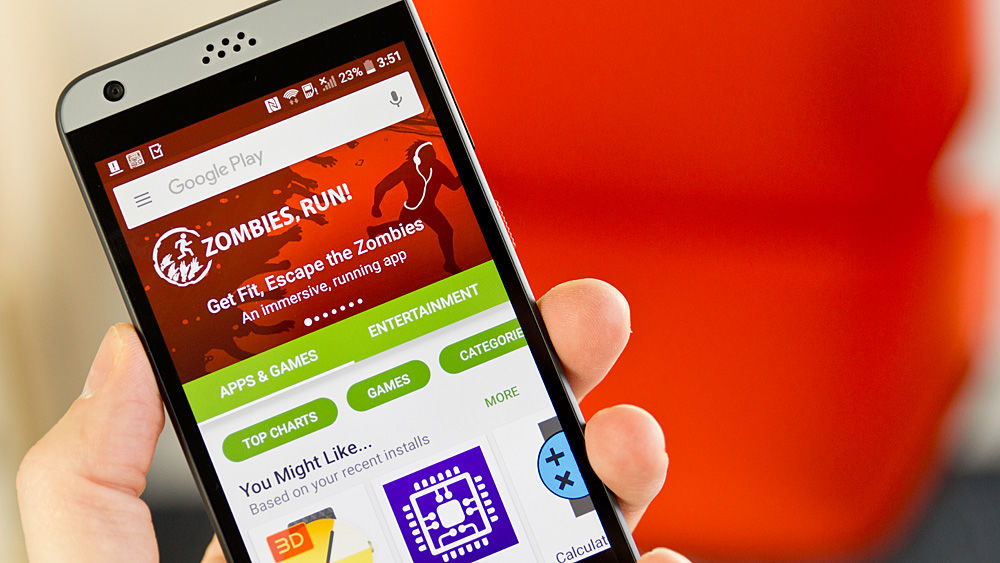 Powering that 720p display is a 1.1GHz Qualcomm Snapdragon 210 processor with Adreno 304 graphics and 1.5GB of RAM, so don’t expect it to perform with flying colours in our benchmark tests, to say the least (more on that below). But, if you’re intending to use the Desire 530 for browsing the web, social media and capturing a few photographs from time to time this should be plenty powerful enough. Swiping between the various menus felt responsive enough to us, and we experienced no real lag in general use.

It’s when you come to downloading apps and running them, particularly games, that it becomes a bit sluggish. While the initial app download would be fairly fast, the installation process takes a fair bit longer – Sonic Dash 2 took around 10 seconds to download, but around 30-40 seconds to install. The Desire 530 couldn’t quite handle the hugely popular endless runner, regularly dropping in frame rate and performing sub-optically – we even had a few occasions where we failed levels because our swipe took a little too long to register.  There’s also a notable lag when opening the camera, sometimes up to five seconds in our experience, so the issues aren’t just game related.

So, let’s talk benchmarks. First of all, we ran Geekbench 3, which measures the processing power of the Desire 530, and the results were a little disappointing but not unexpected given our time with the smartphone. The HTC Desire 530 achieved a single-core score of 293 and a Multi-core score of 959, which puts it in line with fairly old budget smartphones including the Alcatel One Touch Idol and Sony Xperia T, phones that are around 2-3 years old.

We then moved onto GFXBench 3.0 tests which tests the graphical power of the smartphone, and again, this was pretty disappointing. In Manhattan, the Desire 530 scored an average frame rate of 4fps and in T-Rex, it managed a slightly better 9.1fps. This puts it in line with Chinese smartphones including the £88 Oukitel K6000 and budget smartphones including EE’s Harrier Mini.

We then ran the AnTuTu benchmark, providing a score of 27176, which is comparable to the EE Harrier (although the Harrier scored slightly higher). We also ran browser speed test JetStream in Google Chrome where the Desire 530 scored 10.920, currently bottom in our JetStream performance chart. For more information about Benchmarking, take a look at this: What’s the fastest phone? General smartphone benchmark results

With regards to storage, you’ll 16GB built-in with only one option available, although the microSD card slot we mentioned above will provide users with up to 200GB more if needed. 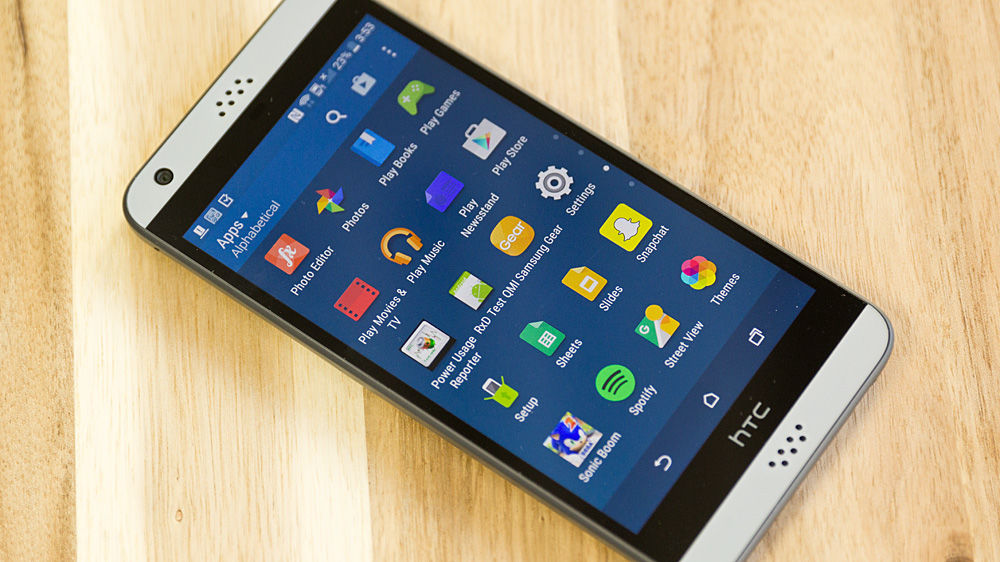 In terms of connectivity, the HTC Desire 530 features Bluetooth 4.1 with NFC capabilities, along with 802.11 b, g, n Wi-Fi (or 2GHz Wi-Fi to you and us). It also features GPS with Glonass for location tracking, and 4G connectivity. It’s all fairly standard stuff for a budget smartphone, with no real exciting feature.

The HTC Desire 530 features a non-removable 2,200mAh battery which got us through the day, although it did depend on our usage. We’ll be running a battery test over the next few days, so make sure you check back soon for our official battery life results.

Read next: Best Android smartphones of 2016

When it comes to the camera, you’ll find an 8Mp snapper on the rear along with a single LED flash, and a 5Mp selfie camera on the front. You’re able to capture HDR photos and panoramas, and there’s automatic face detection and touch focus too. We found that while the rear-facing camera captures a decent amount of detail for a budget smartphone, the colours were pretty washed out.

The HDR mode provided more light in our photos, but at a toll – when taking HDR photos, the camera would freeze for a few seconds while processing the image, which is down to the low-end specs included in the Desire 530. We’ve got two sample photos below – the first is a standard photo, and the second is a HDR photo. 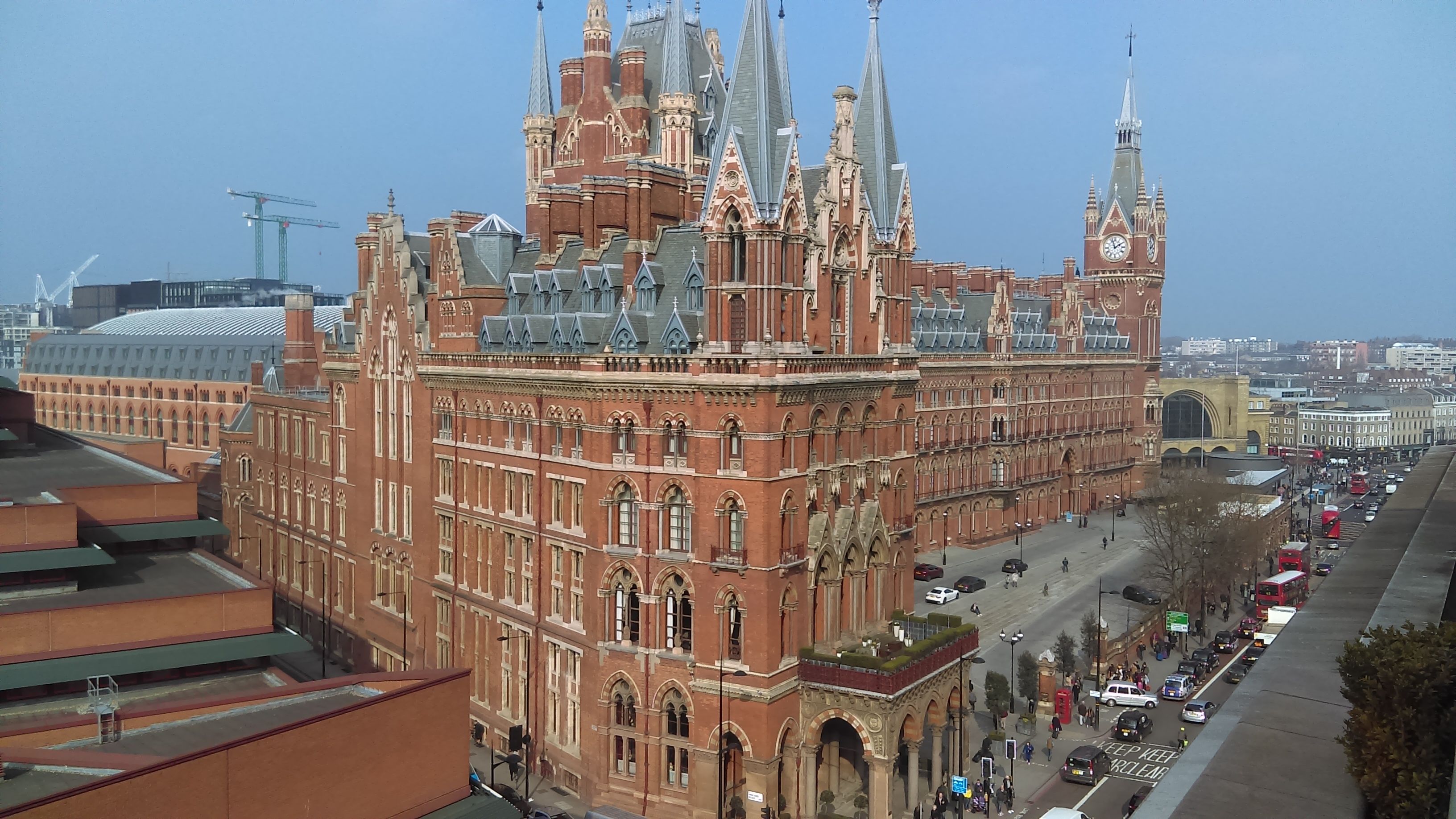 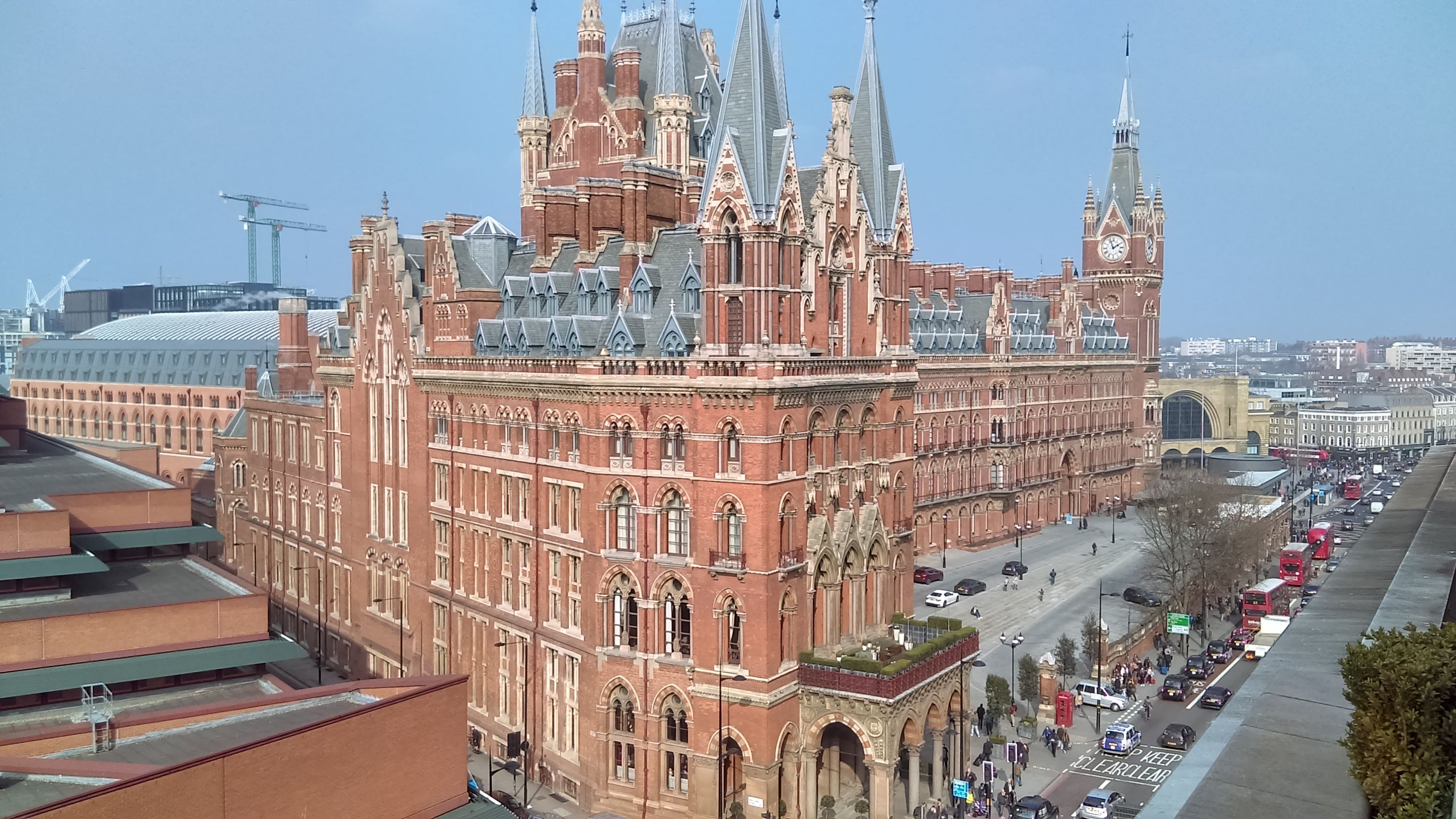 The selfie camera provides a fairly decent image for a budget smartphone, but as with the rear facing camera, the colour reproduction is a little bit disappointing. However, with that being said, it’ll definitely suffice for the likes of Snapchat and video calling over Skype.

The HTC Desire 530 comes equipped with the latest Android operating system, Android 6.0 Marshmallow, along with HTC’s bright and colourful Sense interface over the top, which we think perfectly suits the colourful design of the smartphone. It also includes the BlinkFeed news aggregation feature to the left of the home screen and some other tweaks to stock Android that are individual to HTC’s devices. 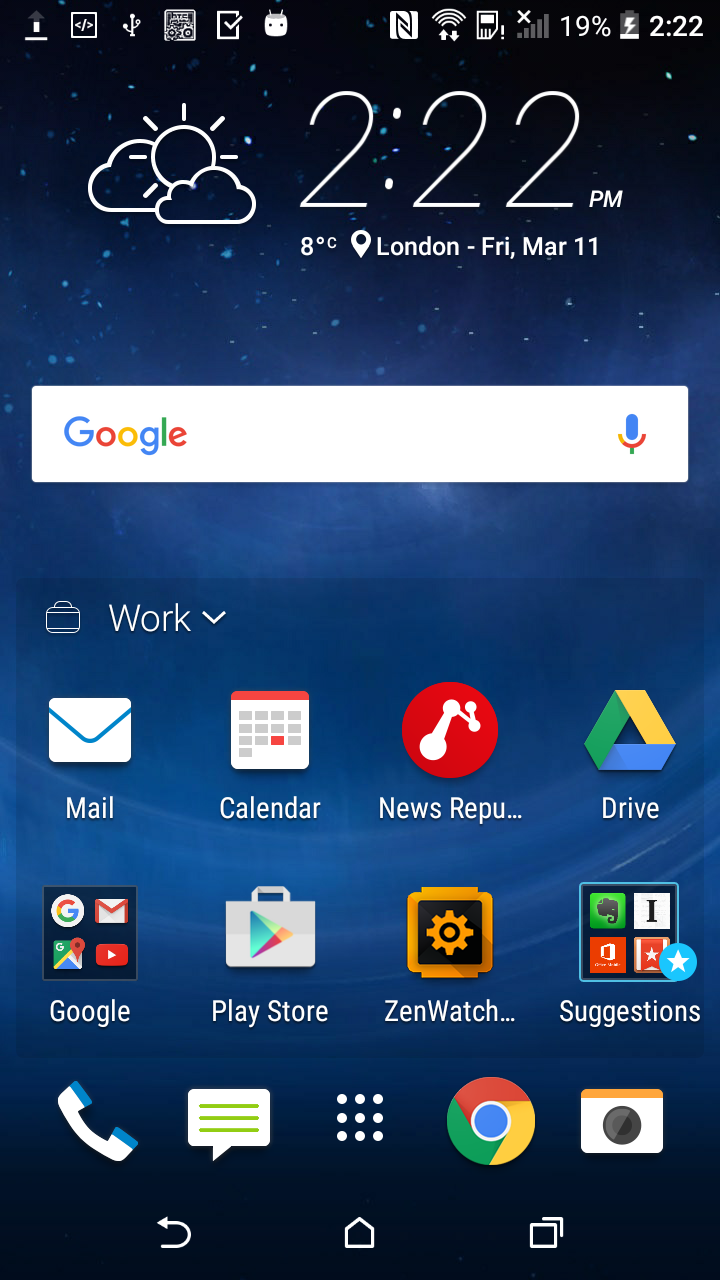 One of the notable features in terms of software on the HTC Desire 530 is HTC Home, a removable widget that sits on your home screen and provides you with shortcuts to your most used apps at home, at work and on the go. There’s no need to manually input the different addresses either, as the smartphone uses built-in GPS to determine it, and will ‘learn’ which apps you use. It doesn’t stop there either, as it’ll also make a number of app recommendations based on the time of day and your current location. It’s a part of the latest version of HTC Sense, Sense 7, HTC’s Android overlay, and should be available on other HTC devices.

Read next: Best smartphones of 2016