Based on our limited time with the Cat S60, we’re not too sure whether it’ll be poplar with the general public. Its bulky form factor may be off-putting for some, and the addition of a thermal camera may not be enough to persuade a consumer to buy the smartphone – sure it’s a cool addition, but we’re not completely convinced that it’s more than a gimmick. With that being said, if you’re in an industry that requires the use of a thermal camera or if you’re prone to breaking your smartphone then it’s an ideal option. We’ll give a more thorough verdict once we get a sample back to the PC Advisor towers!

Unveiled ahead of MWC 2016, the Cat S60 offers something that no other smartphone has offered before – while other smartphone manufacturers are offering smartphones that are broadly similar, Cat is looking to stand out by offering a built-in thermal imaging camera. We went hands-on with the Cat S60 at MWC to see if it can compete with its rivals, and here we discuss its design, features, hardware release date and pricing. Read next: Best upcoming smartphones of 2016

Cat originally announced at MWC 2016 that the Cat S60 will go on sale “later this year” and almost three months after its unveiling, Cat has announced the pricing and release date for the upcoming smartphone. Announced via a blog post on the Clove website, the Cat S60 will cost £599 for a SIM-free handset, and will be available to buy in the UK from mid-June 2016. Those excited about the Cat S60 will be happy to know that pre-orders are now open via Clove. Also see: Best new phones, tablets, laptops & more at MWC 2016.

The Cat S60 has a design that can only be described as robust – it’s extremely rugged and chunky, which is what many of Cat’s customers look for in a mobile phone (building professionals, etc). Cat has yet to release the exact dimensions and weight of the smartphone, but we’ll add these in as soon as we receive them. It’s safe to say that it’s heavier and bulkier than anything else we’ve seen at MWC 2016 at any rate.

However, Cat didn’t design the S60 to be bulky for the sake of it – thanks to its design and strengthened die cast frame, the S60 exceeds military drop tests and can be safely dropped from 1.8m (near ear height) onto concrete, which is ideal for both building professionals and clumsy consumers alike. 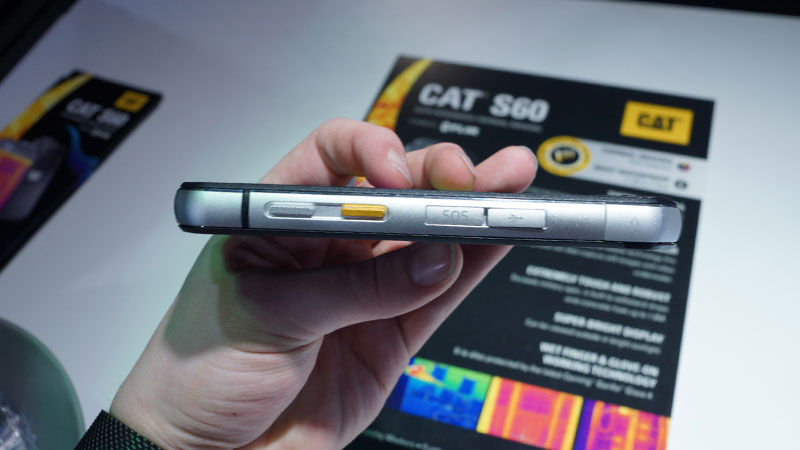 As well as being drop proof, its robust design allows it to be dust proof and, thanks to a number of switches on the device that cover ports on demand, it can be submerged in 5m of water for up to an hour. You can even take photos and record videos when underwater, although you can’t use the thermal camera for obvious reasons. We weren’t able to test the waterproofing during our hands-on with the S60 but if true, it boasts one of the best levels of waterproofing available on any modern smartphone.

It also features robust physical buttons opposed to touch-sensitive buttons for the Android ‘Back’ and ‘Home’ buttons, which is ideal for those wearing gloves (as many of its potential user base would be). It’s a similar story with the buttons along the sides of the device – they’re chunkier than what you’d find on the Galaxy S7, but it suits the needs of those that use it.

Read next: Best Android phones of 2016

The Cat S60 features a 4.7in HD display, although it’s only 720p as opposed to full 1080p. Even though it isn’t quite as premium as other displays on the market, it hopes to make it up in other ways – for one, it’s incredibly bright (540 nits) which makes it ideal for use in sunny conditions. It can also be used with wet fingers, and even when gloves are being used – again, ideal for building professionals.

The most notable feature of the Cat S60 is the FLIR thermal camera that sits just above the standard 13Mp camera on the back of the handset. FLIR is a leading expert in thermal technology, and is the first smartphone to feature built-in thermal imaging as opposed to using an accessory. Much in the same way that smartphone cameras developed from just taking photos to being used for QR codes, Cat hopes that the thermal imaging technology will open new windows for consumers and trading professionals alike. The company even refers to thermal imaging selfies as ‘thermies’ (cringe). 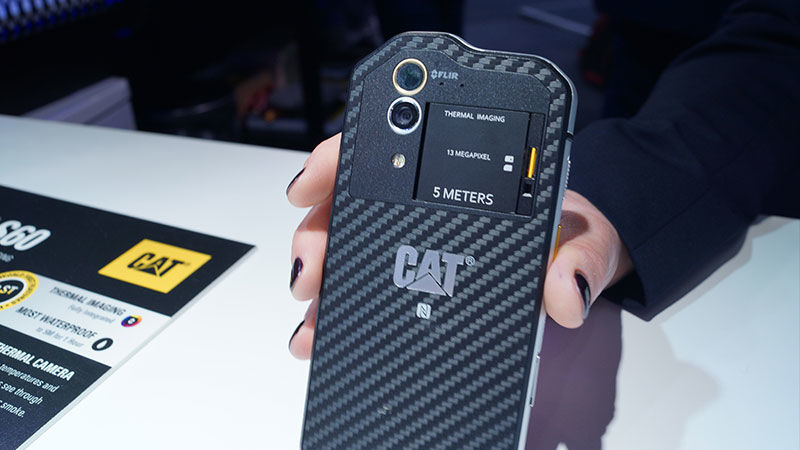 We were pretty impressed with the thermal imaging when we went hands-on with the Cat S60 – even looking at our hands and our smartphones in thermal vision was an exciting experience. When in-app, the temperature range is displayed on the right hand side like a colour map, along with a temperature spot meter that can be used to look at the temperature of a specific area in the photo. The best part is that when you take a thermal photo, it also takes a photo using the standard 13Mp camera and you can easily switch between the two at any time. There’s a 5Mp camera on the front of the smartphone too, although this doesn’t feature thermal imaging technology.

As well as featuring a thermal camera, the Cat S60 features an octa-core Snapdragon 617 processor (4×1.5GHz & 4×1.2GHz), which when coupled with 3GB of RAM and an Adreno 405 GPU provides users with a fairly capable smartphone. While we noticed a bit of lag when trying to open the FLIR camera app (hung at a black screen for around 5 seconds before displaying a preview), we had no complaints with the general performance of the S60 – and Cat reassured us that any bugs would be ironed out before its release later this year.

In terms of storage, you’re looking at 32GB of internal storage, although if that’s not enough you could always insert a MicroSD card slot and boost your storage by up to 128GB. The 3,800mAh battery should get you through a days usage with no problems too, although we’ll confirm this once we get a sample back to PC Advisor towers.

Read next: Best budget smartphones of 2016

In terms of software, you’ll find a fairly vanilla implementation of Android 6.0 Marshmallow, the software announced by Google at the back end of 2015 and what is featured on flagship smartphones including the Google Nexus 5X and the Samsung Galaxy S7. You’ll find a dedicated FLIR camera app pre-installed, but apart from that there isn’t a lot of bloatware on the phone – a plus in anybody’s book.