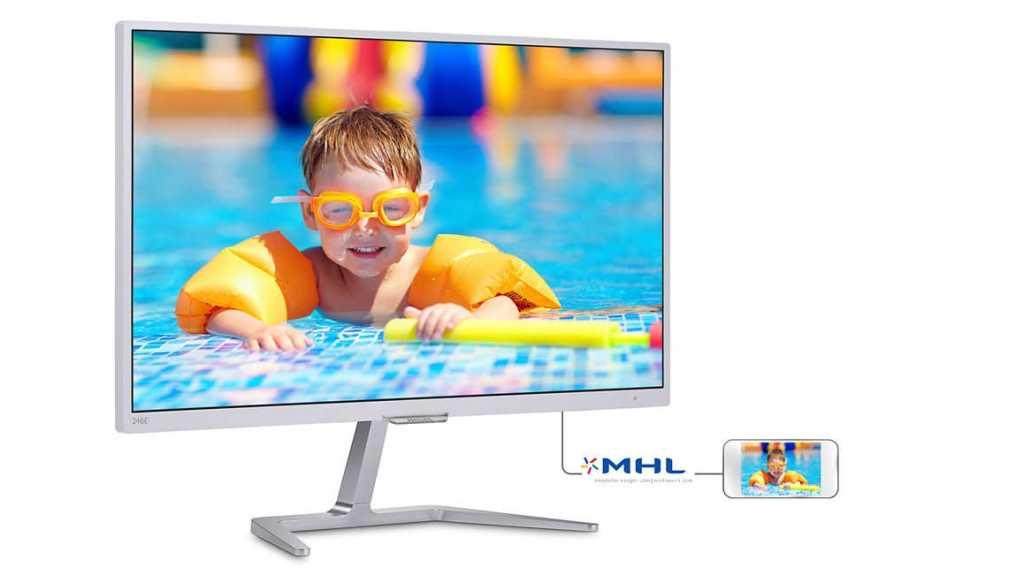 The Philips 246E7QDSW is aimed at anyone wanting an image with accurate colours, and it does a decent job. It’s also well designed and is aesthetically pleasing to look at. And while it isn’t designed with gamers in mind, other monitors offer similar colour accuracy with faster response times – if not the wide viewing angles of the 246E7QDSW.

Unlike many budget monitors, the Philips 246E7QDSW aims for colour accuracy through its PLS LED panel, a type of display which is well known to provide fantastic viewing angles and accurate colours. The monitor also features MHL, which means an HDMI port can be connected to a mobile phone and used to display its content on screen. The full HD display also has a ‘flicker-free’ backlight which is meant to reduce eye strain. The monitor can be bought from Amazon for £164.89. Read next: Best budget displays 2016.

The 246E7QDSW may have a great-looking stand, but it’s limited in its adjustments, where it can only be tilted forwards by 5 degrees and backwards by 20 degrees. On the plus side, the monitor can be mounted on a universal VESA 100x100mm stand.

We found the stand to be pretty sturdy, however found that if there’s a lot of movement on the desk or if the monitor is knocked, it causes the monitor to wobble. Around the back at the bottom right-hand side, there’s a small joystick-like button, which is used to control the On-Screen-Display (OSD). We found this joystick a real treat, as it was easy to use and very intuitive.

You’ll be able to quick-access certain settings: Moving it to the left brings up Smart Image allowing you to quickly change image preset, moving it up brings up the input selection, shifting it down changes the monitor’s audio output (this option varies between the Philips models) and finally moving it to the right gives you access the OSD menu.

On the left-hand side of the monitor there’s a Kensington Lock slot, which is used to secure the monitor from being stolen.

Looking at the bezels, the low-profile design is neat and provides a better viewing experience if you’re planning to put two or more side by side. See: All display reviews.

There’s a good selection of inputs which include HDMI, DVI, D-Sub (VGA) and an auxiliary 3.5mm output jack. There is no 3.5mm input jack, nor a DisplayPort connection, but these two ports aren’t a must with a monitor that’s intended for photo and video editors. Read next: How to connect a laptop to TV.

There are no speakers either, and therefore to output sound, you’ll need to use the auxiliary jack, which is also effectively a headphone output.

The Philips 246E7QDSW’s OSD is easy to access via the small joystick. We found the OSD to be quite responsive and once you get the hang of it, the navigation becomes a breeze. There’s a whole host of OSD settings you can tweak, such as changing the monitor’s picture preset, gamma, colour temperature (including 6500K and 9300K Kelvin preset alongside sRGB and user mode), Pixel Orbiting which is used to shift the image on the screen to prevent screen burn-in, and you’ll be able to also adjust its response time through the SmartResponse option.

The response time of 15ms is slow and therefore this isn’t a great choice if you also want to play fast-paced games. However SmartResponse does allow you to bring down the response time down to 5ms. We found the feature to work as advertised, but the drawback is that it introduces horrendous ghosting, distorting images and videos. Obviously, this isn’t aimed at gamers, but it’s still worth bearing in mind for watching or editing videos.

The Philips also comes with a flicker-free panel which we found to be a worthy addition for those that might be sensitive to small flickering changes in LED panels – this makes the monitor great for long-viewing sessions.

In our tests with a Spyder5Elite we found the monitor to display a bright 246.4 cd/m2 image, which is bright enough for any sort of environment. However, we did find its tested 760:1 contrast ratio to be a little low for a PLS panel.

The monitor achieved 99 percent of sRGB’s colour space and an impressive 85 percent of Adobe RGB’s colour space after calibration. Its colour accuracy was also good with a Delta E of 1.17 (lower is better). However, it wasn’t noticeably better than the AOC G2460VQ6 which uses a TN panel (and has a better response time), as does the BenQ RL2460HT which scored an even more impressive Delta E of 1.03.

This means that if you do want a monitor with accurate colours for photo and video editing, but also want to play games, there are better choices. And given that the Philips is more expensive than the AOC, it’s hard to find anything to justify that higher price. Read next: Best UHD displays 2016.