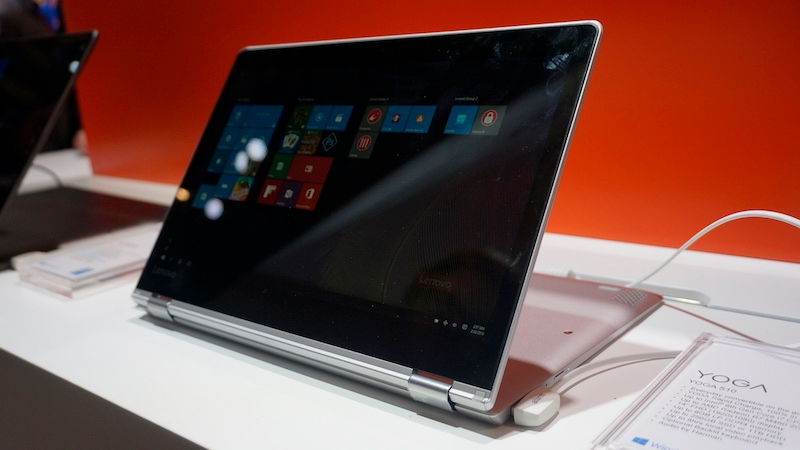 We’re not overly excited by the new Yoga laptops from Lenovo but that’s because this category and family have been around for a while and there’s nothing new on offer here. These appear to offer a good combination of value and features, though, with the latest Intel processors and optional features like a proper GPU.

Available in four different sizes, the Yoga 710 models will launch first with a release date of May.  The 11in model starts at €799 while the 14in model is €899.

We’re double checking with Lenovo on the pricing as it appears the models with the higher spec are cheaper which doesn’t make sense.

There’s really nothing too exciting about the design of the new Yoga 510 or 710. They follow the same blueprint as previous devices in the family or products. Both look like typical laptops and it’s really only the hinge which is the interesting bit.

The hinge itself is nothing fancy like the flagship Yoga 900, but nevertheless does the job of flipping the screen 360 degrees. This means, like previously, you can use the device in four different modes: laptop, tablet, display and tent.

What you can’t see is that Lenovo has integrated the Wi-Fi antenna into the hinge for better connectivity. It claims up to a 20 percent improvement compared to before.

If you’re looking for portablilty the smaller 710 model is your friend at just 1.04kg. meanwhile, the Yoga 510 weighs either 1.75- or 2.08kg depending on which size you opt for.

With pricing mostly on the cheaper side of things don’t expect too much on build quality beyond a plastic chassis. That said, the devices feel well made and with Lenovo you get a decent keyboard and trackpack.

On that promise of more performance, Lenovo has opted for 6th-generation Skylake Intel Core processor for the entire range of new Yoga laptops which come with Windows 10. With various different models available, you’ll be able to get up to Core i7 on the 510 while the 710 has up to Core m5 for better value.

Across the board Lenovo touts up to eight hours of video playback. There’s an optional backlit keyboard and audio by Harman. The 510 offers Yoga Rapid Charge which Lenovo says will get the battery to full in two and a half hours.

Powering the graphics of these new laptops is up to an AMD Radeon R7 M460 with 2GB of memory, but you’ll have to get the 510 model for that as the 710 just uses integrated graphics on the Intel processor unless you go for the 14in model which has optional  GeForce graphics.

AS mentioned earlier, there are three different screen sizes. Both laptops are available in a 14in model while the 710 coming in a smaller and more portable 11in size and the 510 is the one for those looking for a traditional 15in screen.

The resolution is Full HD no matter which size you choose so the smaller ones are slightly crisper but not by much. Our main complaint after some hands-on time is that the brightness is poor even at 100 percent – we’re hoping the show lights at MWC made it appear worse than it actually is.