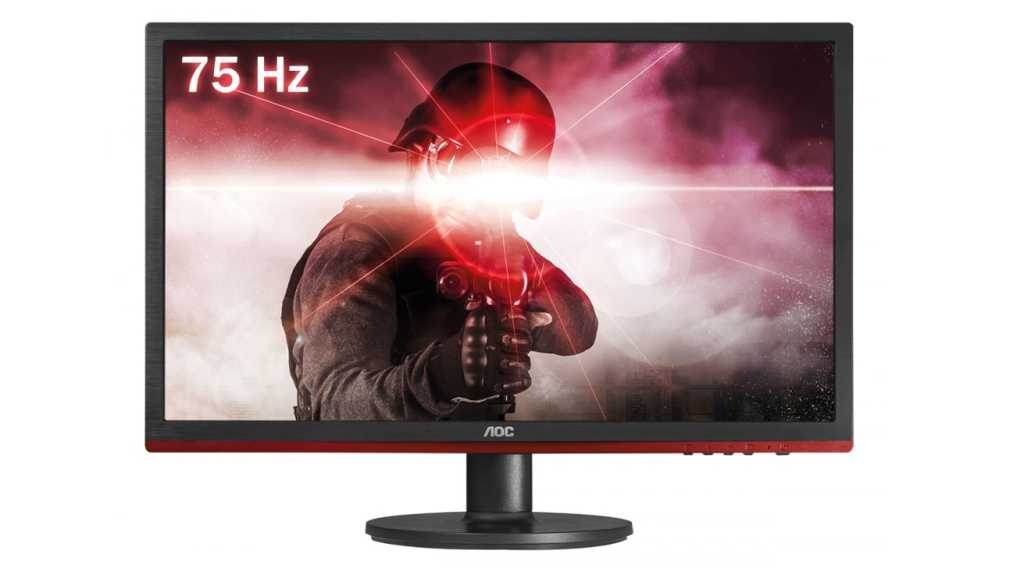 The AOC G2460VQ6 is a great budget gaming monitor, which is mainly aimed at those with AMD cards. We were also impressed by the image quality at this price, and its styling setd it apart from other budget monitors.

AOC’s G2460VQ6 is a budget AMD FreeSync monitor which aims to please gamers thanks to a refresh rate of 75Hz. The 24in full HD display also has flicker-free and has anti-blue light technology, which allows you to game for longer periods of time. The monitor can be bought from Amazon for £122.18. See also: the best budget monitors to buy in 2016.

The G2460VQ6 is limited by its stand: you can only tilt it forwards by 5 degrees and backwards by 20 degrees. Despite said stand having a thick frame, we found it was quite wobbly, but thankfully the monitor can be mounted on a VESA 100x100mm stand.

On the plus side, we really liked the design, which fit well with AMD’s red colour coding. On the right-hand side you’ll find the buttons to control the monitor, which have quick-access to the monitor’s input, volume, menu and the ability to cycle through the pre-configured game modes.

The AOC’s design is really well thought out, with the red plastic part of the monitor curving by the AOC logo at the front. Despite being made out of plastic, the whole frame of the monitor and its base are finished with a brushed aluminium look, which gives it a classier look than you might expect at this price.

The bezels are a medium size, thinner than those found on the BenQ RL2460HT, yet thicker than the thin bezels found on the Asus VN247H.

The screen has a matt coating, which allows it to be viewed in bright conditions without reflections. Finally, the monitor also has a Kensington Lock slot, to deter thieves. Also see: All display reviews.

There’s a good selection of inputs which include HDMI, DisplayPort, D-Sub (VGA) and an auxiliary 3.5mm jack. We were a little surprised not to see a DVI input, but if anything, it’s better to use DisplayPort slot, which provides a good alternative to HDMI.

The monitor has a pair of 2W speakers, which are useful to have, but we didn’t find them accurate or powerful. You can output and input sound through two separate 3.5mm auxiliary jacks.

The OSD is easy to use and is presented at the bottom of the screen. We found it had all the options we wanted, including DCR (Dynamic Contrast Ratio) which boosts the contrast ratio of the monitor, gamma preset, colour temperature, Bright Frame which enables you to make a particular section of the screen brighter and can independently have its contrast ratio tweaked – an interesting feature that we don’t see included by other manufacturers. There’s also Overdrive (used to bring down the response time), which we’ll get to in a minute.

The G2460VQ6 is a 24in 1920×1080 LED TN display, capable of up to a 75Hz refresh rate. It provides an extra 15Hz over the standard 60Hz, which results in a better capability to deal with tearing and slightly better motion tracking capabilities.

We found that Overdrive slightly improved the response time, but found that there was added ghosting when playing fast-paced games. We achieved the best gaming experience with Overdrive completely switched off, where the real-world response time felt slower than the quoted 1ms.

Its colour accuracy was also decent with an average Delta E of 1.15, which is good considering it’s a TN display. It couldn’t quite compete with the fantastic colours of the BenQ RL2460HT, but still performed extremely well. We didn’t notice any inconsistency with the backlight LED, where the backlight bleed was extremely minimal. Read next: Best UHD displays 2016.

When checked for brightness, the Spyder measured 268.9 cd/m2, which is more than enough for most people. Its contrast was a little disappointing with a tested 630:1 ratio, meaning you won’t get a good reproduction of deep black or bright white colours.

Finally, we found FreeSync to be a valuable addition. This is the monitor’s ability to sync its refresh rate with the graphics card. It really does prevent screen tearing from occurring. It should be noted that the AOC G2460VQ6 is compatible with Nvidia cards, but you won’t be able to use the FreeSync feature of course.