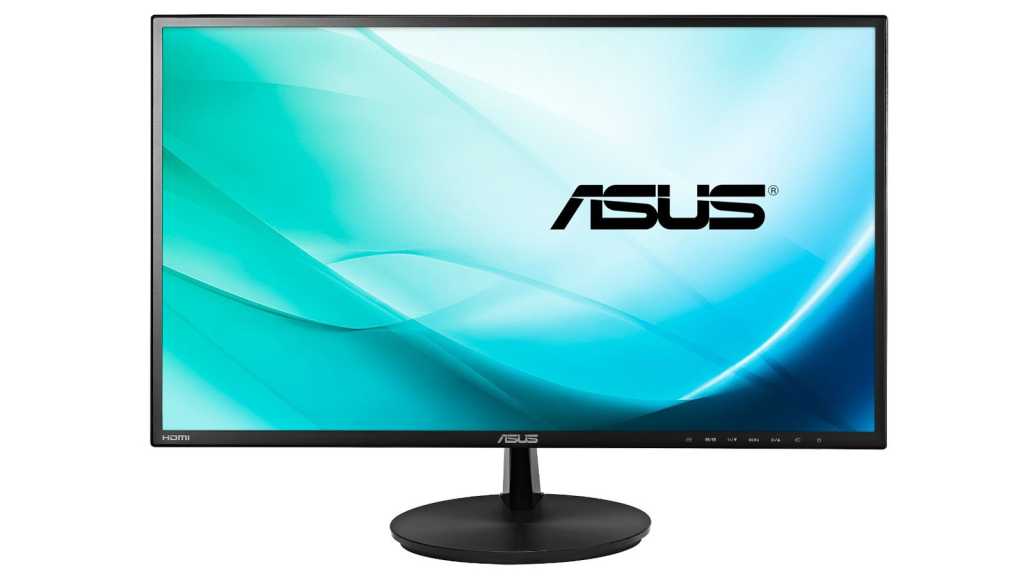 The Asus VN247H is a monitor which can handle games with ease and has a fantastic thin-bezel design that’s good for a multi-monitor setup. However, its colour accuracy and stand do count against it.

The stand is a tilt-only affair (forward 5 degrees, backwards 20 degrees), made of textured plastic, which we think looks a lot better than glossy or a plain matt-finish.

There’s no pivot or height adjustment, but you can replace it with your own VESA 100x100mm stand, which can be handy if you want to wall-mounts the monitor or use your own multi-monitor stands.

The bezels around the monitor are extremely thin, which minimises the gaps between the actual displays for a more seamless experience.

On the bottom right hand-side of the monitor are several icons, which all have a one-button quick access:

The buttons are located at the back of the monitor, making adjustments a bit awkward and unnatural.

There’s a nice textured back panel and also find a small flap which covers the monitor’s inputs and outputs. It’s easy enough to remove this panel when you want to plug or unplug cables from the back.

The monitor has a matt finish on its display, which prevents reflections in bright-light conditions. Also see: All display reviews.

As you can see, there are two HDMI inputs, a D-Sub VGA input and a pair of 3.5mm mini jacks. There’s no DVI input, but Asus does provide you with a HDMI to DVI cable in the box.

The monitor has two 2W speakers, which are useful to have for Windows sounds. It also has the ability to output sound through another 3.5mm auxiliary jack, which is useful if you want to listen to music or play games straight from your monitor.

Through the OSD, you’ll be able to adjust the screen modes, change the colour temperature and the skin tone, and make changes to its sharpness. We found the options in the OSD easy to navigate and useful for customising our monitor.

The VN247H runs at 60Hz refresh rate at full-HD. Interestingly enough, we found the ‘Maximum reported refresh rate’ within our AMD Radeon Settings reporting a 75Hz refresh rate through our AMD R7 370 graphics card. This comes from the monitor being able to be overclocked to 75Hz and running natively at 75Hz at lower resolutions such as 1280×1024. Asus confirmed that the monitor was designed to run at 60Hz at 1920×1080 and this is the refresh rate we used the monitor at when conducting our tests. Read next: How to overclock your monitor.

Through our tests with various games, we found the monitor to perform well, where its real-world response time was versed to cope with the most intensive and fast-paced shooters out there. We also didn’t find any noticeable input lag, which is essential for fast-paced gamers. We therefore found the monitor suitable for competitive gaming, especially as there was no discernible ghosting.

Through our Spyder5Elite tests, the monitor achieved a below-average gamut that displayed 94% of sRGB’s colour space and 73% of Adobe RGB colour space after calibration. Its colour accuracy was below average with a Delta E of 1.72 (lower is better), in comparison to a slightly more expensive monitor such as the BenQ RL2460HT which managed a Delta E of 1.03.

Side by side with its competitors, such as the ViewSonic VX2457, the VN247H’s colours look a bit washed out. However, this is only in the default Standard mode. If you prefer more saturated colours, it’s fairly easy to tweak the individual RGB levels in the OSD. Or, you can simply use one of the other preset modes, such as Scenery Mode or sRGB Mode.

On the plus side we didn’t notice any inconsistency with the backlight LED, and backlight bleed was minimal.

Using the Spyder5Elite to measure brightness and contrast ratio we reported an output of 206 cd/m2 with a contrast ratio of 910:1. Both results are good, but its competitors such as the Viewsonic VX2457-MHD offer better performance. Read next: Best UHD displays 2016.