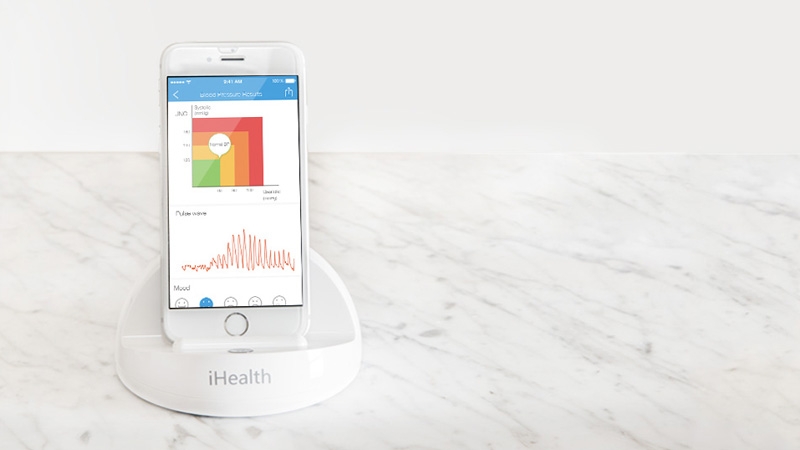 Having high blood pressure can kill you, and keeping tabs on it is hugely important. The Xiaomi iHealth Smart Blood Pressure Monitor makes doing so easy, and over standard blood pressure monitors allows you to track data over time. At £30 it’s well-made, affordable, and it might just help to save your life.

The Xiaomi iHealth is available for £30.38 from GearBest, which is a Chinese site that offers free shipping to the UK (note that you may have to pay import duty – read our advice on grey-market tech). We reviewed the ‘Bluetooth’ rather than ‘Chinese’ version.

The two devices appear to be identical, except the version you get from GearBest comes with a light blue arm band with Chinese instructions (don’t worry, you don’t need to understand these), and the version from iHealth has a dark blue band with English instructions.

If you have high blood pressure, a general lack of symptoms means you’re unlikely to know about it unless you have had your blood pressure recorded. However, if it goes unnoticed it can have serious implications for your health.

Having high blood pressure puts an increased strain on your arteries and heart as it pumps blood around the body, which can lead to a heart attack or a stroke, and even affect your brain, kidneys and limbs. If you have other health issues, such as diabetes or high cholesterol, this will only exacerbate the problem. Also see: How to make your home a smart home

When we opened the Xiaomi iHealth box we were unsurprised to find only Chinese instructions, but a little stumped when it came to setting up the smart blood pressure monitor. Thankfully, it’s really simple.

The device comprises a 115×66.5mm, 240g white plastic circular dock, with a light blue cuff that can support an arm circumference of between 22- and 36cm, plus a grey rubber tube that connects the two. A 2200mAh built-in battery lets you use it without additional cables, and when it runs out of power you can recharge the Xiaomi using a standard Micro-USB charger.

Nothing in its build quality gave us cause for concern, and it’s good to learn that the Xiaomi iHealth is an FDA-approved blood pressure monitor with pressure accuracy of ±3 mmHg and pulse rate accuracy of ±5%.

To get started with the Xiaomi iHealth don’t scan the QR code on the box as you’ll be taken to the Chinese version of the companion app on Xiaomi’s app store. Instead, launch Google Play or the App Store on your phone or tablet, then download the free iHealth MyVitals app.

Launch the app and create a free account, and it will connect to your phone or tablet over Bluetooth.

Wrap the band around your left arm, just above the elbow, and Velcro it in place, keeping it reasonably tight. Insert the tube into the hole on the left side of the Xiaomi iHealth. There is a dock for your phone or tablet but it merely needs to be within Bluetooth range.

The app has a simple interface that’s very intuitive to use. When connected over Bluetooth the first screen you’ll see is the Measure tab, which features a large blue Start button. Tap this and the arm band will begin to fill with air and tighten around your arm. It may become slightly uncomfortable, but if it hurts then you have it wrapped too tight. Also see: Best activity trackers 2016.

Blood pressure is measured in millimetres of mercury (mmHg), and referred to as systolic over diastolic, for example 120 over 80, or 120/80mmHg.

The Xiaomi iHealth smart blood pressure monitor lets you take as many readings as you like and record them over time (found on the List tab), which allows you to see if particularly high- or low readings are anything to worry about. You can also use the Trends tab to see graphs of recent, weekly, monthly and yearly data for your blood pressure and pulse, and easily share over email (perhaps with a doctor) your blood pressure readings from within the app.

(You’ll notice from our screenshots that our blood pressure readings are all over the place, and that’s because when we got it out the box everyone wanted to have a go with the Xiaomi iHealth smart blood pressure monitor.)

A healthy blood pressure for an adult is below 120/80mmHg, although most adults range somewhere between 120/80mmHg and 140/90mmHg.

Anything lower than 90/60mmHg (either number) is known as low-blood pressure (hypotension), which isn’t a huge cause for concern but it can lead to you feeling dizzy, for example. If you are worried you should consult a doctor or nurse, but know that it is certainly the lesser of two evils when compared to high blood pressure (hypertension).

If you have hypertension, a doctor will advise you to take steps to bring it down. Some of these might include reducing your salt intake, eating more healthy fruit and vegetables, consuming less alcohol, slimming down if you are overweight and generally keeping more active.

You should note, though, that there are some things that affect blood pressure that you can’t control, such as your age, where it runs in the family, and potentially even your ethnic origin (people from African-Caribbean and South Asian communities are at greater risk of high blood pressure).