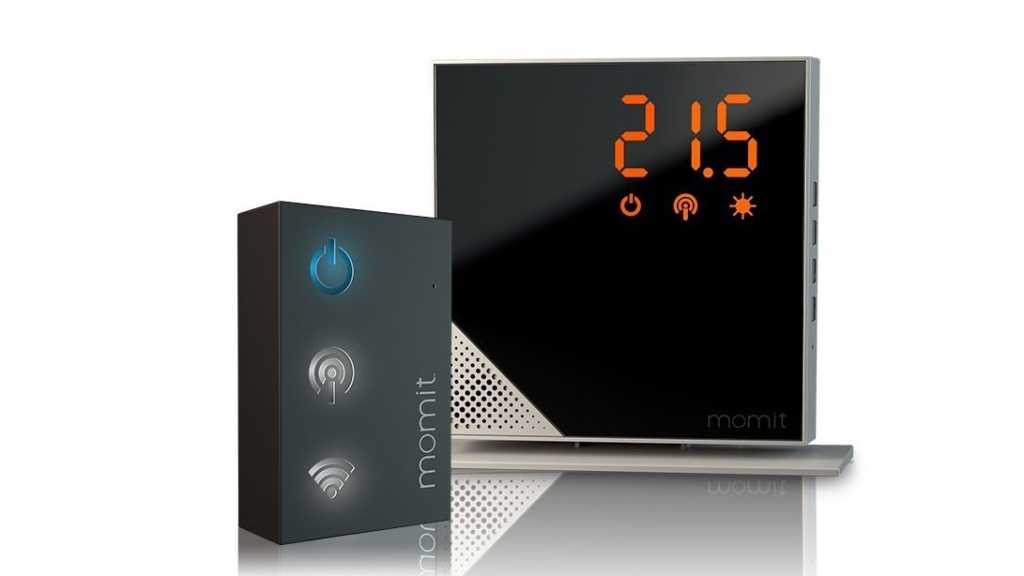 If you’re replacing a wired thermostat and don’t mind fixing the Momit in the same place, then installation is an absolute breeze, and a snip at under £100. It’s certainly not the most stylish and isn’t really suitable if you need to control hot water too, but for many people it will give them the remote control they need, with good presence detection and geo-location as bonuses.

Momit isn’t a well-known brand in the UK and hails from sunny Madrid. As of 2014, it has a UK office and the Home Thermostat is the company’s second product, after the Smart Thermostat from 2013. Here’s our Momit Home Thermostat review.

We’ve tested all the popular smart thermostats, and the Momit is one of the least expensive. The thermostat itself costs just £59, but you’ll buy that only if you need additional room thermostats in a home that is plumbed for multiple zones.

The starter kit is what most people will need. It comprises a thermostat and gateway which connects to your router and provides remote control from your phone, tablet or a web browser. You can buy the Momit starter kit from Amazon for £99.

This is ideal if you’re replacing an existing wall-mounted, wired thermostat. However, if you want to use it wirelessly (a wireless connection between the boiler and thermostat) you will need the Extension kit which costs £29 from Amazon.

There’s a choice of colours: black, red, blue, gold and silver, and all are the same price. 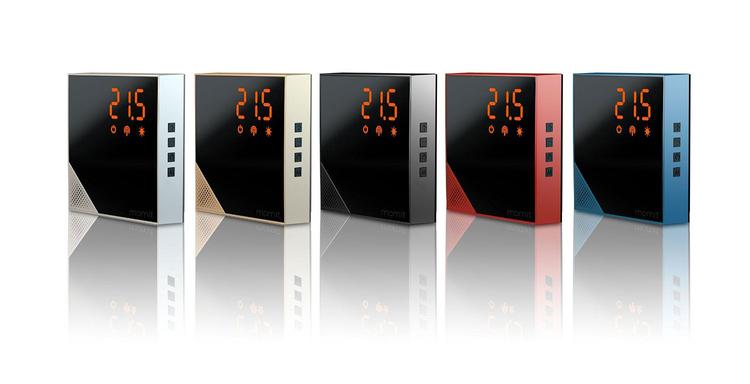 The thermostat itself is not good looking, at least not in gold as we were sent for review. With its seven-segment LED display and angular styling, it almost looks like a relic from the 1980s. The all-plastic construction doesn’t help, but is expected at this price. Oddly, there’s no white option, which might look less conspicuous mounted in your hallway.

The box is bigger than you might imagine at 100x100x25mm, and this is partly because it includes space for a pair of AA batteries if you choose not to power it from some existing in-wall wiring. Batteries are included in the box, and are said to last at least a year even with regular use.

The gateway is tiny, though, and plugs into a spare Ethernet socket on your router. It’s powered via a microUSB cable, so if your router has a spare USB port (usually used for connecting a printer or hard drive) you may get away without having to use an extra mains socket.

Our sample was sent with a European plug and no UK adaptor, but you can use any USB charger you have lying around, including one from an old phone.

The Extension kit is fairly small and, like the thermostat, comes with screws and wall fixings: you just need to provide the drill and screwdriver. Unless you enlist the help of an electrician, this is a self-install product in the UK. 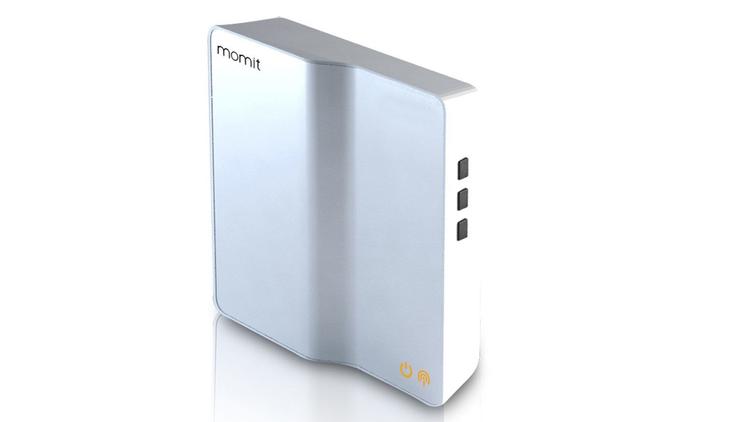 No wires are included to connect the box to your boiler: it’s assumed that you already have existing wiring running to a control box of some description. If you don’t, you’ll need a four-core cable to carry mains power and the thermostat switch signal from the boiler to the box. In our case, there was a wireless box already connected for a dumb, but wireless thermostat so swapping it over to the Momit was relatively painless.

Unusually, the connectors are a push fit, so you don’t even need a screwdriver.

The quick-start manual offered a terse eight-step guide with tiny, hard to read diagrams and no description of what the buttons do or what the indicator lights mean – the same goes for the thermostat itself. These have been updated to fix this, but you’ll need to view or download them from Momit’s website.

As you might expect from the low price, some features are missing (but there are also some nice extras, such as geo-location). Like all smart thermostats, the Momit lets you turn your heating on and off from anywhere in the world with an internet connection. You can also raise and lower the temperature and make other settings through the app or website. Apps are available for iOS and Android, Windows Phone and Blackberry.

It doesn’t control hot water like the Hive or Nest 3rd-gen thermostats, but it can control air conditioning systems for both heating and cooling.

Like Tado, it uses geolocation to turn the heating off or on when you are further or closer than the distance you specify in the app. To do this, it uses your home address which you enter when you first set up the app (it’s tricky to do this as you have to enter the address on one line in exactly the format specified. If you don’t, the location won’t be found on the map and you can’t continue to the next screen.)

The other factor which determines the distance is, of course, your phone. It means that, although you can use the app on a tablet, you won’t be able to use the geolocation feature unless it has a GPS receiver. And you’ll have to carry the tablet everywhere with you.

Even if you decide to disable geolocation, there’s presence detection (motion and light sensing) which allows the Momit to turn off the heating if it thinks no-one is at home. You can specify the time for this – we went for one hour – unlike Nest which doesn’t have any such option and can end up heating your house for hours after you’ve gone out after, forgetting to turn off the heating.

Setting times is a fiddly business in the Android app we tried out as you have to use sliders which have too big a range, so it’s very difficult to be precise. It would be far better to be able to enter exact timings instead of having a slider.

The app and manuals also talk about ‘air conditioning systems’ which of course needs to be changed to ‘heating’ for the UK market. 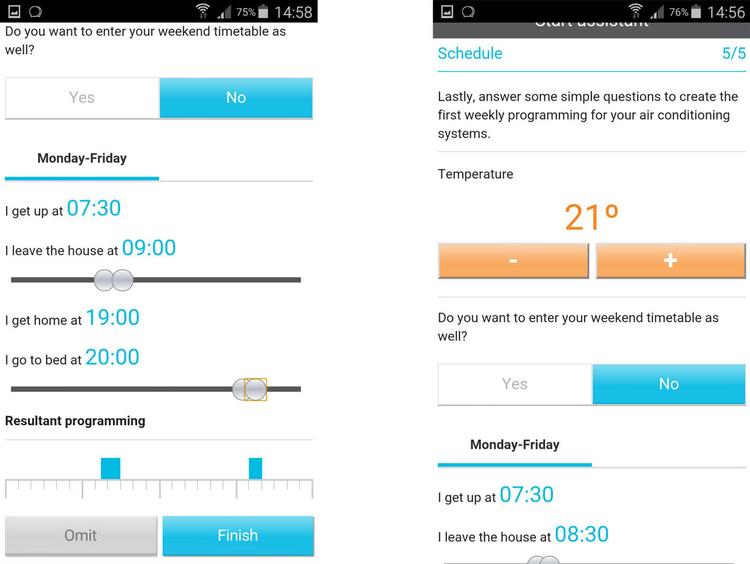 During the initial setup (shown above), you’re asked when you wake up, leave the house, come home and go to bed. This is used to form a basic schedule which you can apply to different days. It’s possible to copy a day’s schedule to another day, but like the fiddly sliders, the interface is clunky and ugly. Momit could learn a thing or two from the Nest and Hive apps which are much better.

By default, the schedule works exactly like a traditional programmer: it will turn the boiler on at the start of a heating period and switch it off at the end, unless the desired temperature is already reached, of course.

The ‘Smart Mode’ works like Nest’s Learning feature: it takes notice of when you increase or decrease the temperature manually and can introduce new heating periods (or change the set temperature) if you make three similar changes, or more. 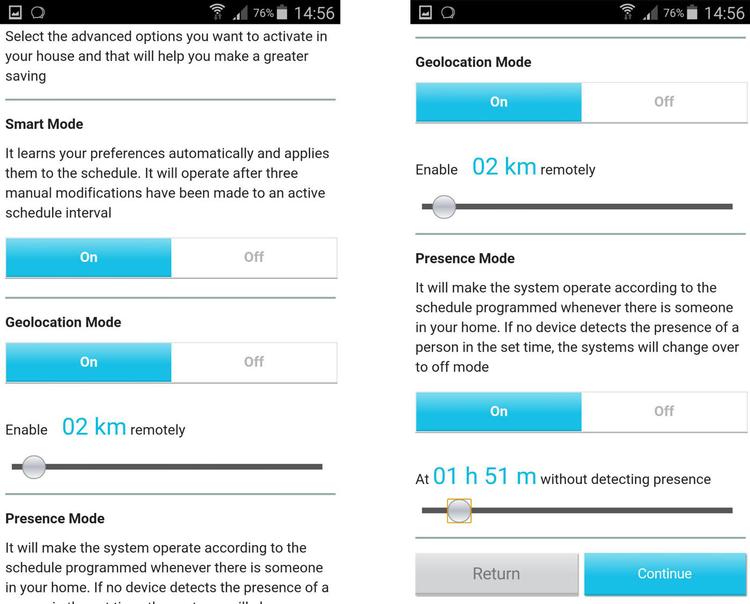 A new feature, in beta, is My Budget. This is essentially a learning algorithm which will figure out how long your home takes to heat and cool, as well as the effects of radiant heat (when it’s sunny, for example) and when you cook (your cooking heats up the house, so there’s less of a need to use radiators). The idea is that the boiler will be fired up in advance in order to hit the desired temperature by the start of the heating period.

It doesn’t take into account the local weather, so if it’s unusually warm, it won’t fire up the boiler later. The in-app weather forecast is there purely for your own reference. We’re currently testing out My Budget to see how it works and whether it’s effective.

There are couple of other useful features in the app: temperature adjustment and hysteresis. The first lets you adjust the temperature shown on the display (which is the ambient temperature) to either calibrate it against another thermometer which has a different reading, or simply because you want to.

One example is to make it appear hotter than it really is to prevent family members from turning up the heating too high. You can set +/-9 degrees, so you can force the display to read 22 degrees C even when the real measured temperature is 20 degrees.

The Hysteresis setting lets you decide when the heating should kick in. By default, it’s 0.5 degrees: i.e. the boiler won’t fire up if the measured temperature is within 0.4 degrees (or less) of the set temperature. You can adjust this.

The thermostat itself displays temperature to the nearest tenth of a degree, and you can adjust the temperature in 0.1 increments. This would be painful if it weren’t for the ability to hold down the + or – button to quickly increase or decrease the temperature.

In the app, the main screen shows all your thermostats, but if you have only one, you still have to tap on it to get to the ‘main screen’ which is a very spartan affair with the current temperature, options to increase or decrease the set temperature and ‘device control’ which lets you switch between scheduled and manual modes, or turn the system off.

You have to use the ‘side menu’ to get to the Holiday mode which is for maintaining your set minimum temperature while you’re away. This is really for frost protection, otherwise you could simply turn the system off.

As we said right at the start, we’ve used the Momit for just a couple of weeks, so we’re still discovering how well it works and how the features work in practice over a longer period, so we’ll be updating this review as we go.