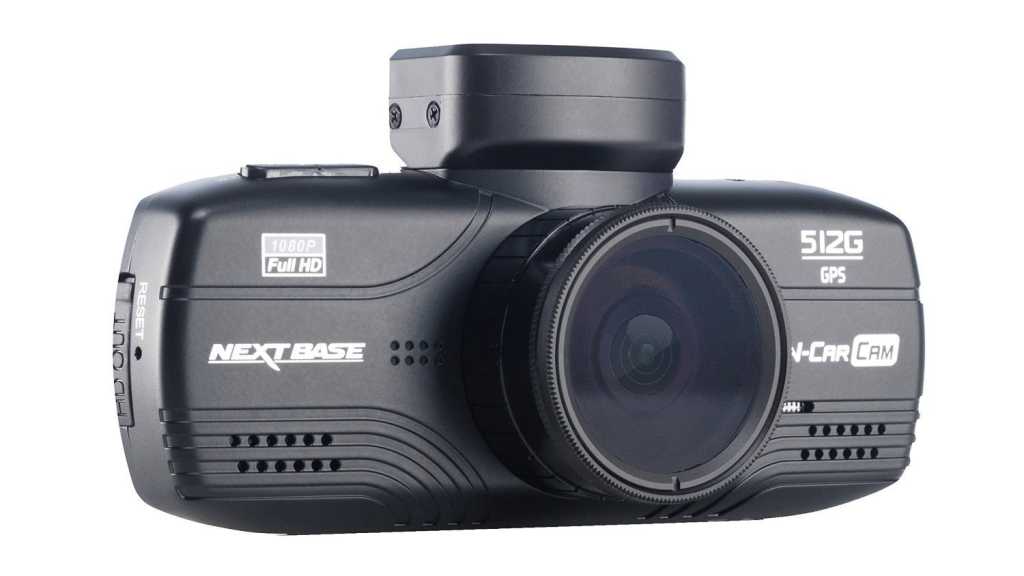 As an overall package, the Nextbase 512G is one of the best, but at this high price it doesn’t offer enough of a jump in image quality over cameras around £100 to make it good value. Some of those even come with SD cards. If you can afford it, it won’t disappoint, but the Asus Reco Classic is better value at £99. Remember, though, that some insurers will give you a discount when you take out a policy if you have a dash cam: Nextbase cameras are most approved lists, so it may be better value for you than the Asus which isn’t on any lists that we know of yet.

With prices starting from around £15, it’s well worth investing in a dash cam. However, while the cheapest models have the bare minimum of features, top-end models offer a lot more in addition to higher-resolutions and better image quality. Here’s our Nextbase 512G review.

You don’t even get an SD card: the optional Go Pack costs £15 from Halfords and includes an 8GB San Disk microSD card, a full-size SD adaptor and a carry case for the dash cam. There’s a new 32GB version of the Go Pack which will go on sale soon, but you can use any microSD card, as long as it’s fast enough to record 1080p video. That usually means class 4 or better, but we’d recommend opting for a Class 10 card from a well-known brand.

Unlike some smaller dash cams, the 512G has a big 2.7in widescreen display. That obviously makes it bulkier and it may mean you can’t hide it behind your rear-view mirror. We found the suction cup – as with all suction cup mounts – wouldn’t adhere to the tinted area around our test car’s mirror, so it wasn’t an option anyhow.

In those cases, it can either go below or to the side, but if you choose the latter it will probably obscure the passenger’s vision. Alternatively, you can buy an adhesive mount which has a lower profile – we found the Asus Reco Classic uses the same mount design and were able to attach the Nextbase to the Classic’s sticky mount.

A 4m power cable is provided which plugs into your car’s accessory socket. Sensibly the USB port which is used for power and data is on the top edge so you can keep the wiring as neat as possible: the cable should be routed around the headlining, down the A-pillar and then somehow to your 12V socket. You can buy a permanent wiring kit if you don’t want the power lead taking over the socket, but you’ll probably have to have it installed professionally.

The camera itself is well made and the lens is covered by a circular polariser – the sort usually reserved for high-end cameras. You should rotate this when necessary to cut down on reflections and glare: used correctly it really improves image quality. 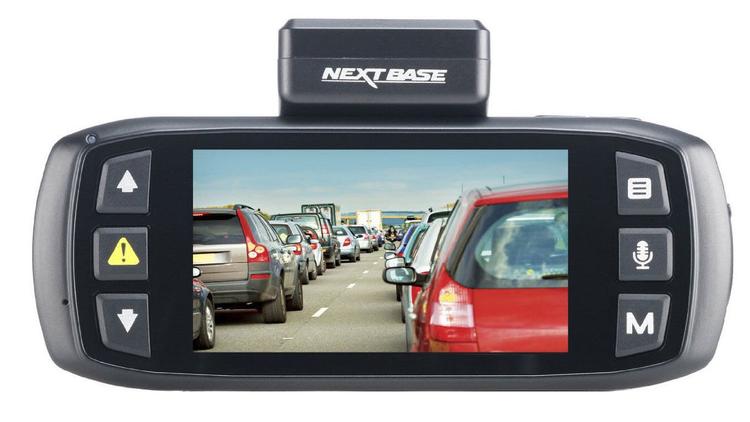 The buttons are big and easy to press, but it’s not obvious what does what. With the helpful and well-written manual you’ll quickly get the hang of it, even if having the OK button for selecting things out of the way on the top edge.

The mini HDMI port and microSD slot are hidden behind flaps, and the SD slot is recessed too far to be able to remove the card – we had to resort to pushing it with a pair of tweezers to remove it.

Aside from setting the time and date (which isn’t really necessary as it’s obtained automatically via GPS), there are no settings to change: the 512G comes ready to go. It creates a new video file every three minutes, records at the highest quality (1920×1080) and has motion detection turned off.

As well as built-in GPS, it has a G-sensor which records g-forces. All this data is played back in the supplied software, so you can see your speed, location on a map and the g-forces (for identifying the direction of impact) as well as the video. In the camera’s settings you can choose individually whether or not date, speed, GPS info and the Nextbase logo are stamped on the video. You can even enter your car’s registration which can be included on the video.

The screen can be set to go blank after a certain time, or to display a compass and your speed.

It’s worth saying that there’s no Wi-Fi, so it doesn’t tick every last box. Some people like Wi-Fi as long as they can use it to quickly download a video clip to their phone rather than have the hassle of taking out the SD card (no mean feat with the 512G) grabbing an adaptor or card reader, copying it to their laptop and then remembering to return said card to the camera in the car.

There’s an internal battery which lasts for around 5-10 minutes: it’s not intended for recording, but to ensure the recording can be saved before the camera powers down. It’s also useful if you need to remove the 512G from its mount and take video or photos outside the car following an incident.

We’ve mentioned motion detection. This is a feature you’ll find on many dash cams, and can record footage when there’s movement in front of the lens. You have to enable this manually when you park up, and bear in mind that it can drain your car’s battery so it’s best to get the camera permanently installed with its own battery if you want to use this feature.

During the day, image quality is very good. The combination of a sharp lens, filter and Sony Exmor sensor adds up to detailed footage with great colours. Even in miserable dingy conditions where other dash cams struggle, the wide dynamic range delivers an image that’s more lifelike. Be sure to watch them full screen at 1080p resolution (select this using the cog icon).

You can’t always make out number plates when you pause the footage on a PC, especially when driving at higher speeds or when cars are too far ahead. That’s partly down to the wide-angle 140-degree lens which captures a lot of the scene in front but also means objects are smaller than on dash cams with narrower fields of view.

Audio is good, although on the loud and boomy side.

At night, there’s the expected drop in quality. However, the dynamic range is still better than average and this means more detail is brought out in dark areas. It’s also much sharper and less grainy than on other dashcams.

Still, you can pretty much forget about reading the number plate of the car that just cut you up. We found that your own car’s headlights tended to reflect off the number plate in front and make it effectively blank.

Detail is too blurry of cars coming in the opposite direction (including parked cars) but you should be able to read the registrations of cars you’re following – if they’re close enough and your own lights aren’t shining on their plate.

Identifying the cause of a collision shouldn’t be difficult, unless it happens behind you. Even then, the g-force data should help.

At the top quality, each three-minute file takes up 350MB, so an 8GB card is enough for just over an hour’s footage. Loop recording means the oldest files will be overwritten when the card fills up, but you can press the emergency button to lock the video being recorded currently.

Recording starts automatically when the camera gets power, and stops when power is cut. Just make sure your car’s 12V socket isn’t powered even with the keys removed. If it is, like in our test car, you’ll need to remember to plug it in before you set off, and unplug it when you park. 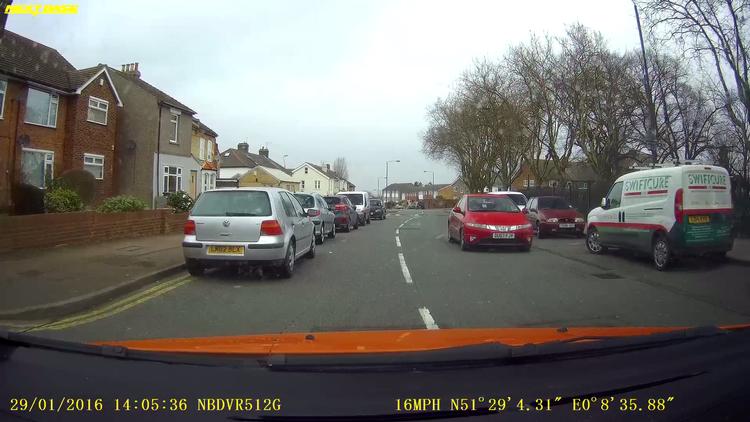 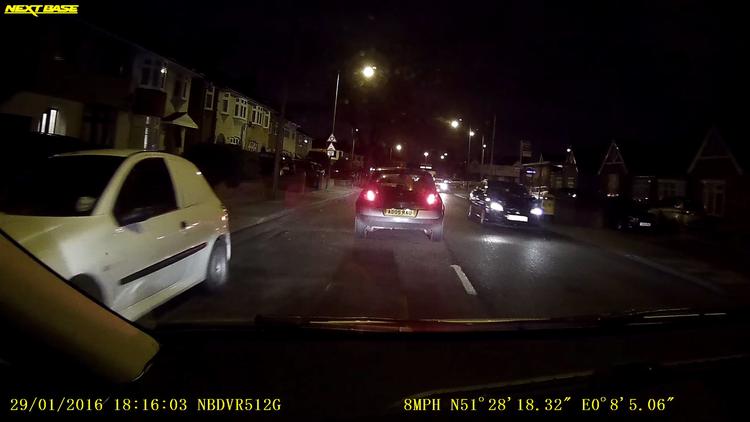