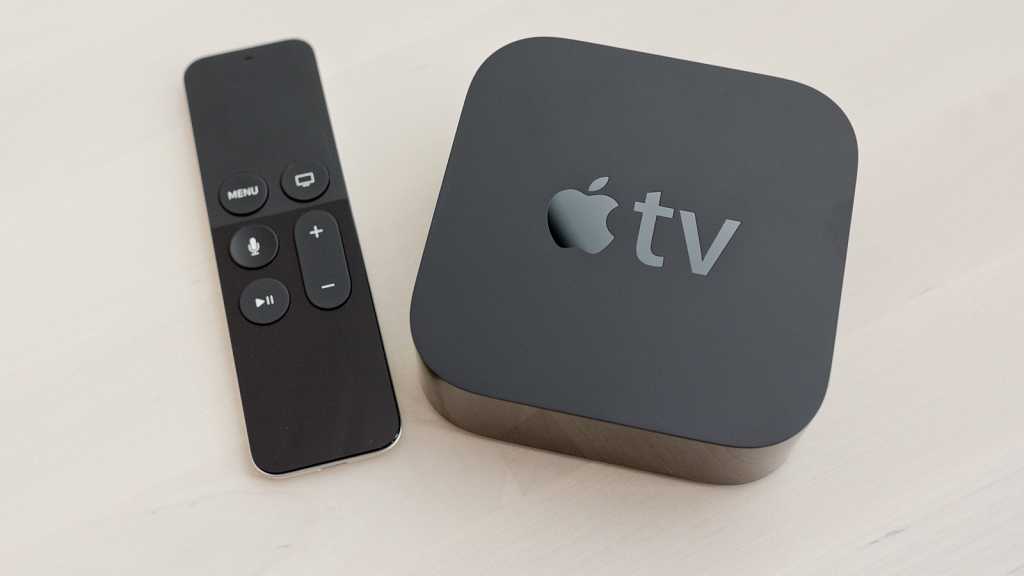 For some people – mainly those with iOS devices and no 2nd- or 3rd-generation Apple TV – the new box is a great media streamer and games machine. However, there’s no escaping the high price and limited selection of apps. And if you’re not interested in gaming, you’re just as well off buying a 3rd-generation Apple TV or Roku for less than half the price. Competition from other gaming media streamers is stiff, too, with Amazon’s £79 Fire TV offering more UK catch-up TV as well as similar gaming performance, expandable storage and support for 4K content. Ultimately, the 4th-gen Apple TV has potential (Apple may even upgrade the software so it supports 4K at some point) but right now that potential is far from realised.

For years, rumour had it that Apple would launch a TV. Realistically that was never going to happen. Apple doesn’t make TVs and, logically, it doesn’t need to. It just needs a media streamer that’s better than the competition. Here’s our 4th-gen Apple TV review.

Update 22 March: Thanks to a free update, the Apple TV is getting some much needed new features. tvOS 4.2 adds support for folders on the home screen so you can tidy away your apps, and there’s also expanded Siri support so you can use it to search for apps in the store. Previously (and mentioned in the review below as a bugbear) Siri wasn’t able to return results from the store. Now that there are thousands of apps, it’s far easier to speak your search. Siri will also be able to enter usernames and passwords, although some people are concerned about saying their passwords out loud and exactly how secure they are – despite assurances from Apple that privacy was the first consideration when adding the new dictation feature.

Apple has had three years to come up with a new model and it says that the 4th-generation Apple TV is the future of television. It’s all about apps. Unlike previous Apple TVs you can now browse an app store and install whichever apps and games you like.

Of course, this isn’t revolutionary as other streamers and, indeed, TVs have had apps for years. Gaming on a media streamer isn’t new either. Amazon’s Fire TV streamers allow you to play casual games, as does Google’s Nexus Player.

Previous models have managed to stay under the magic £100 barrier, but the latest Apple TV costs £129 for the 32GB model and a whopping £169 for the 64GB model.

The new box looks a lot like the previous two models, albeit a third taller. You still don’t get an HDMI cable in the box, nor an Ethernet cable. You probably won’t need the latter as your Wi-Fi may well be quicker – the wired port is limited to 100Mbit/s.

Dropping the optical S/PDIF port will be a source of annoyance for some (not many, but definitely some) and in its place is a USB C port, which is for restoring the box’s software should the need arise. If you were relying on an optical audio output for connecting headphones, then note that this new Apple TV allows you to connect Bluetooth headphones.

The remaining port is an HDMI 1.4 for hooking up to your TV or A/V receiver.

The biggest design change is the new Siri Remote. Surprisingly, it’s not all that obvious how to use it, until you figure out – or explain to family and friends – that the top section is a touchpad and giant button, the Menu button acts as a ‘back’ button and the one with a TV icon is the home button.

It communicates via Bluetooth but can also use infrared. It should automatically learn to control your TV’s volume – it did with our Panasonic TV – but you can ‘teach’ it if that fails. As long as your TV uses the HDMI-CEC standard, it should all work fine, and you can power on your TV when you wake up the Apple TV using the remote.

The Siri part is possibly the best feature. It takes what Amazon does with voice search and takes it further. You can search for TV shows and programmes, but you can also bark more generic commands such as “show me action movies” and then refine the results by saying “just the ones with George Clooney” or “only the good ones”.

And while you’re watching a video, you can say “rewind 30 seconds” or “what did she just say”. The latter is clever as it skips back 10 seconds and turns on subtitles so you’re left in no doubt what you missed the first time.

You can also say the name of an app or game to launch it, the the name of an artist or album to play music without swiping endlessly through menus. You can ask for a weather forecast, too, but there’s no web searches as you get on an iOS device.

The internal battery is said to last a couple of months – longer than we’ve been testing out the Apple TV – and it charges using a standard Lightning cable in a couple of hours. You do at least get one of those in the box.

Setup is amazingly easy if you have an iPhone or iPad. Once you tell the Apple TV you have one, you just hold it near the box to pair it and some settings – such as your Wi-Fi password will be synced automatically. It’s also far easier to type your Apple ID and password via the app than using the frankly poorly designed on-screen keyboard which is a pain to use with the Siri remote.

In under five minutes you’re ready to start installing apps and streaming videos. A short demo video – as you get on the Amazon Fire TV – wouldn’t go amiss, but you’re left to your own devices.

The fancy new interface, which runs on the new tvOS, is great to look at, but it’s not really a great departure from what’s gone before it. Navigation by swiping on the touchpad is a love or hate thing. If you don’t need to scroll much it is fun to start with but – contrary to what you’d imagine – isn’t as quick or accurate as using a remote with buttons and a direction pad.

You can rearrange icons as you like, and you can even put your favourites in the top row – previously reserved for Apple’s apps and content. Netflix is missing to start with, but you can install it from the App Store.

Entering email addresses and passwords, as you have to when you sign into an app such as Netflix is a tedious process. The letters are all on one line, and it takes a few swipes to go from one end to the other. At launch the old Apple Remote app for the iPhone didn’t work with the new Apple TV, but in December Apple released an update to fix this, and it makes it a whole lot easier to enter search terms and passwords.

The YouTube app has the right idea, though: it gives you a unique code to enter at youtube.com/activate so you don’t have to enter any detail at all. Instead you grab a laptop, iPad or iPhone and it’s a painless process to sign in.

What we do like is that, unlike on other media streamers, the Siri search will include apps such as Netflix in the list of results. So if you hold the remote’s Siri button and say “Breaking Bad” you’ll see results from Netflix as well as iTunes. It doesn’t work in all apps, though, so you’ll have to use the BBC’s awkward on-screen keyboard to search within iPlayer, or resort to the Remote app on your iPhone. You can’t search for apps in the App Store using your voice, either, which seems like a missed opportunity.

What’s strange is that Apple still doesn’t have a video streaming service to go alongside its Music streaming. Even if you don’t subscribe to Apple Music, you can stream music you’ve bought in iTunes and access iTunes libraries on computers on your home network. One niggle is that although music will continue playing in the background, you can pause it but not restart it with the play/pause button. If you want to carry on listening you have to go to the home screen and then launch the music app again. If it’s one of the apps in the top row, you can scroll to the left-hand side of the content previews which pop up at the top to the ‘Now playing’ icon.

Playing games with the Siri remote can be good fun, but only really as a novelty. Some games use the accelerometer (Asphalt 8, for one) which means it works much like a Nintendo Wii remote, while others, such as Jetpack Joyride, Crossy Road and Badlands just use the touchpad’s button. You can buy an optional wrist loop to prevent accidents where the remote would otherwise fly out of your hand.

For more serious fare, you’ll want a Bluetooth gamepad – a few third-party controllers are supported. You can’t pair more than one Siri remote, but certain games including Crossy Road allow you to use an iPad or iPhone with the game installed as the controller for a second player.

Family-oriented games make the most sense on media streamers, and Fibbage XL certainly is one to try when friends are round. At £7.99, Fibbage and quite a few other games are more expensive than you might expect, but equally there are many cheaper – and free – options. It’s well worth checking if the app is cheaper on your iPhone or iPad as some apps are universal, so you can head to the Purchased section of the App Store when you first set up your Apple TV to see what you can install from the list of apps you’ve bought before.

Currently the App Store is relatively limited when it comes to games: it isn’t simply the same selection you’ll find on your iPhone.

The voice search doesn’t always recognise what you’re trying to say. Siri thought we were trying to say “find bitch XL” when searching for Fibbage and when asking for “ITV player” Siri launched BBC iPlayer.

The fact is, iPlayer is pretty much the only catch-up TV app available in the UK at the moment. There’s no ITV Player, no All 4 and no Demand 5. However, there’s a third-party app which gets around this and another workaround is to use AirPlay and stream video from any number of apps (not Sky Go, though) on your iPhone or iPad.

The app situation will surely change over the next 12 months, but it puts the Apple TV at a disadvantage when other streamers – Amazon and Roku to name but two – have the full suite of UK catch-up TV and more. The level of game quality is similar to Amazon’s Fire TV box, but you’re not going to get the same experience on the lesser-powered Roku devices.

It’s hard to know whether 32GB is ‘enough’ or not, and unlike the Amazon Fire TV, there’s no microSD slot for adding more storage when the internal stuff fills up. It’s also hard to know how much storage is free. Under Settings > General > Manage storage you only see a list of installed apps, how much space they’re using up and a bin icon so you can delete them.

Again, this is easy to fix and we’re sure that updates will arrive that sort out these and other common complaints.

A small consolation is that Apple has spent a lot of time, effort and – presumably – money to produce some of the most stunning screensavers we’ve ever seen. The slow-moving aerial scenes which include a night-time flight over Central London, plus views of the Golden Gate bridge and Great Wall of China are great for impressing friends.