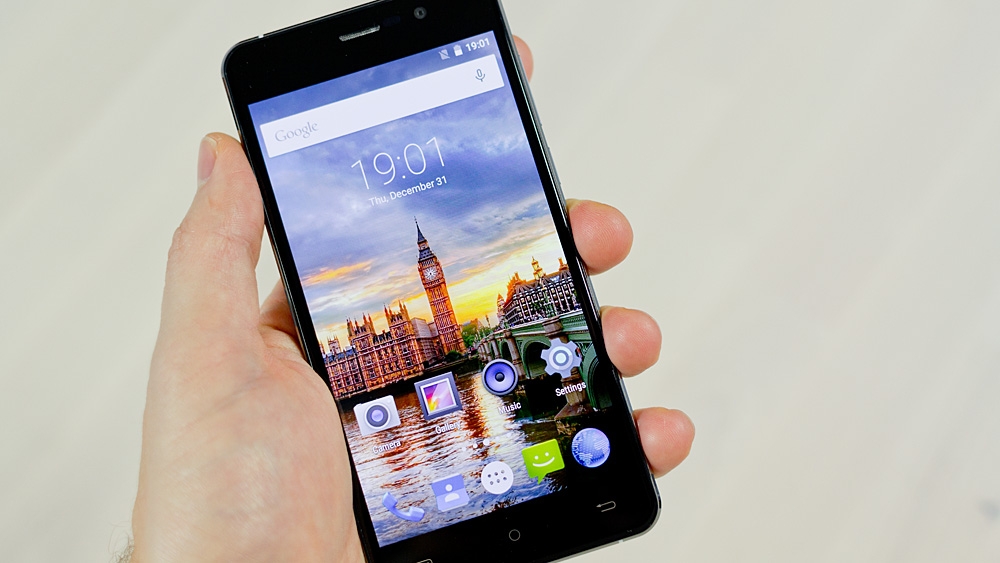 We can’t argue with the immense value for money offered by the Cubot P12. It’s not the fastest budget phone we’ve seen, but it is probably the best-looking. The lack of 4G support is disappointing, but the spec sheet otherwise offers fairly impressive reading at this price. A strong rival to the Vodafone Smart Prime 6 as a network-unlocked budget smartphone, even if Vodafone as a brand is much better-known in the UK than is Cubot.

Cubot isn’t a brand we’ve come across before, but its P12 is a well-designed budget Android smartphone that costs just £75. At this price there are both hits and misses, which we’ll explain in detail in our Cubot P12 review. Also see: Best budget smartphones

At just £74.99 from Amazon with free UK delivery the Cubot P12 is cheaper than all but one of the devices in our best budget phones round-up, and yet it looks more expensive than many of them. There are some drawbacks associated with buying a phone this cheap, for example 4G connectivity is not supported, but on the whole the Cubot P12 appears at first glance to be a real bargain.

In the UK the Cubot’s most fiercesome rival is the £79 Vodafone Smart Prime 6. The Vodafone is a 4G phone while the Cubot is not, but in other respects the P12 has the upper hand, both network-unlocked and with a better overall specification. However, given the fact that Cubot is a relatively unknown brand in the UK, especially when compared to Vodafone which has numerous stores across the country, it wouldn’t surprise us to see many readers plump for the Smart Prime 6 instead. See all budget phone reviews.

Upon removing the Cubot P12 from its box we were immediately impressed by its design. You just don’t get phones this cheap that look this good. (Well, until now.)

The P12 has an aluminium-magnesium metal frame that makes it appear much more expensive than many of its budget plastic rivals, and adds durability to its design. Sure, there’s still some plastic to be found with a removable rear cover, but this is held tight to the phone without feeling flimsy, and gives welcome access to the also-removable 2200mAh lithium-polymer battery, and dual-SIM- and microSD card slots. Also see: Best phones.

The relatively thin 8.1mm frame adds weight to the illusion that this is a premium phone. Perhaps weight is the wrong word, however, since the Cubot P12 is just 165g. That’s an ideal weight for it to feel substantial in the hand and yet not overly heavy.

With a 5in screen the Cubot is simple to operate in a single hand. The screen is an IPS panel, which offers realistic colours and good viewing angles, with a 1300:1 contrast ratio and 450 nits brightness; it’s also fully laminated, and we like the effect this creates.

The HD resolution of 720×1280 pixels means it offers a pixel density of 294ppi, which is really not bad at all for a budget phone. Not only does it match the Vodafone Smart Prime 6, but it’s not far off the iPhone’s 326ppi. Text is sufficiently clear, and videos and images look good.

The screen isn’t edge-to-edge, but the bezels are reasonably slim. Below this you’ll find touch buttons for Android’s usual options, although the Cubot is only a toucher taller than the Vodafone at 143.9mm; the only physical buttons are a volume rocker and power switch on the P12’s right edge.

At the phone’s bottom is a Micro-USB port for charging (we wouldn’t expect USB-C at this price), and at the top a 3.5mm headphone jack that you’ll likely be more inclined to use than the phone’s rear-mounted speaker – despite a small nipple that intends to raise the phone’s speaker from a surface, we found sound somewhat muted and slightly muffled even when the speaker wasn’t obscured by a palm or a desk. Also see: Best sounding phones.

The Cubot P12 is available in black or white and is supplied with a free screen protector and clear case in the box. See all smartphone reviews.

The Cubot P12 isn’t as impressive on the inside as it appears from the outside, but at £75 you can’t argue with the specification and, for many people, it will prove quite capable of the day-to-day tasks they wish to achieve. We found it fast enough to navigate and use, and in many respects its spec sheet offers more enjoyable reading than that of the Vodafone Smart Prime 6.

Both the Cubot and Vodafone has relatively low-power processors, with the Cubot fitted with a 1.3GHz MediaTek MT6580 quad-core processor and the Vodafone with an also quad-core 1.2GHz Qualcomm Snapdragon 410 CPU, and each have 1GB of RAM.

There wasn’t a huge difference between the two in our benchmarks, with the Vodafone taking the upper hand in Geekbench 3 (1401 against the P12’s 1186), but the Cubot mastering AnTuTu with 24,807 points against the Smart Prime’s 21,842.

In our graphics tests the Vodafone took back the lead, scoring 13fps in GFXBench 3’s T-Rex component and 6fps in Manhattan. Meanwhile, the Cubot wouldn’t run Manhattan and mustered only 4fps in T-Rex. That’s not to say you can’t play casual games on this phone, just don’t expect it to handle anything too intensive.

We now use JetStream rather than SunSpider to judge browsing performance, since the latter is no longer actively supported. However, we did run SunSpider on the P12 so we could more accurately compare it to the Vodafone, since we don’t have JetStream scores for the Smart Prime 6.

Compare the Cubot P12’s performance to all the phones we’ve recently tested in our article What’s the fastest phone 2016?

In terms of other core hardware, the Cubot wins on storage, with double the Vodafone’s 8GB allocation (of which around 5GB is available to the user) with 16GB (of which around 11GB is available). Both accept storage expansion through microSD, the Smart Prime 6 by up to 64GB and the P12 by up to 32GB. Also see: How to add storage to Android.

The Cubot’s battery is lower in capacity than the Vodafone’s, at 2200mAh against 2500mAh, but it is removable, allowing you to swap in a spare (or you could use a power bank). With very similar hardware onboard, battery performance should be just a little lower than that of the Vodafone, which claims to offer 18 hours of talk time – you might just about get two days from it with moderate usage.

As you would expect at this price, there is no support for wireless- or quick charging.

Connectivity is the one area where the Cubot P12 both shines and disappoints. It lacks 4G, which is in essence mobile data at Wi-Fi-like speeds. The Vodafone does support 4G, and for only £5 more. If your contract doesn’t include 4G or you can’t access it in your local area in any case then this might not bother you as much as it does us. Also see: Best cheap 4G phones 2016.

On the up side, though, unlike the Smart Prime 6 the Cubot P12 doesn’t force you to use the Vodafone network (neither must you buy a top-up at the point of purchase, increasing the overall cost). You can use any network that supports its frequencies (850/900/1800/1900MHz 2G GSM, 900/1900/2100MHz 3G WCDMA); in fact you can use two, since this is a dual-SIM dual-standby phone (both Micro-SIM). Also see: Best dual-SIM phones and dual-SIM phone buying advice.

The Cubot P12 is also lacking an IR blaster and NFC (you do get the HotKnot equivalent, although it plays with only other MediaTek-powered phones). It supports 802.11b/g/n Wi-Fi, Bluetooth 4.0, USB OTG and GPS.

On paper the Cubot offers a better camera setup than does the Vodafone, which to be fair wouldn’t be too difficult to beat with its 2Mp front camera and 5Mp rear camera with LED flash. Also see: Best phone camera 2016.

By comparison, Cubot claims to offer 8Mp at the front and 13Mp at the rear, with a 0.5A LED flash. Actually, this is using software interpolation; what you really get is 5- and 8Mp cameras, although this is still better than those of the Vodafone.

Our test shots were acceptable for a budget phone, up to the job for the odd snap but not about to replace a proper camera. We found colours to be fine but, as you might expect, detail is fuzzy when you zoom in.

In common with the Smart Prime 6 the Cubot runs Android Lollipop; it’s not the latest Android operating system, but Marshmallow is not yet widely available to devices other than Google’s own Nexus line-up. We prefer the software setup of the P12, however, which has none of the preinstalled bloat the Vodafone does (mostly Vodafone apps, to be fair).

The Cubot P12 also supports air gestures for making phone calls, taking photos, moving between home screens and more, plus smart wake gestures such as a double-tap to wake the screen or the drawing of a character onscreen in standby mode to launch an app of your choice.