The Casio WSD-F10 outdoors isn’t for everyone, but if you’re somebody that spends a lot of time trekking, cycling, fishing or generally outdoors, it makes for an ideal solution. It’s durable design may put some off, but we must admit that it grew on us during our time with the watch. The variety of on-board sensors provide users with information that isn’t available on smartwatches like the Gear S2 or Apple Watch. We’ll bring you a full review once we get one back to PC Advisor towers!

During CES 2016 in Las Vegas, popular watchmaker Casio announced its first Android Wear smartwatch. However this smartwatch isn’t an Apple Watch or Samsung Gear S2 rival, as its designed to be used outdoors and serves a different purpose. With this being said, we went hands (or should that be wrists) on with the Casio WSD-F10 outdoor smartwatch, and here’s what we thought about it.

The Casio WSD-F10 isn’t your standard consumer Smartwatch, and this is evident with its design and build. The Casio outdoor Smartwatch is designed to be used in the great outdoors (of course!) and because of this, it doesn’t offer the sleek design that consumers expect from the likes of Samsung and Apple. It looks like a standard outdoors watch, with a military standard heavy-duty aluminium body.

In fact, the first thing we noticed when we saw the Casio WSD-F10 in person was just how chunky it was, especially when being worn. It measures in at 61.7×56.4×15.7mm and weighs approximately 93g, and feels weighty on the wrist – there isn’t much chance of you forgetting you’re wearing it! Screws are clearly visible around the edges of the watch face, along with a number of bulky easy-to-access buttons, but we feel it adds to the overall charm of the watch. It’s available in orange, red, green and black so it should be fairly easy to find one that takes your fancy. 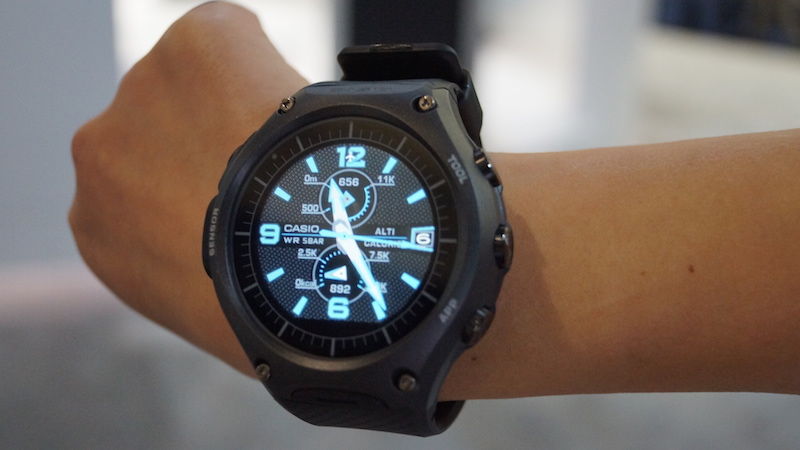 The Casio WSD-F10 outdoors Smartwatch offers a myriad of features that aren’t available on standard consumer smartwatches, alongside the standard features of Android Wear. The smartwatch is actually the first smartwatch that offers a built-in microphone along with 50m water resistance, which should offer a good level of protection against the likes of rain, sweat or even falling in the water when fishing.

The smartwatch offers specific functionality for trekking, cycling and fishing. For example, when trekking you can quickly access accurate environmental information including atmospheric pressure, altitude and even a compass for navigation by pressing one of the buttons on the side of the watch. 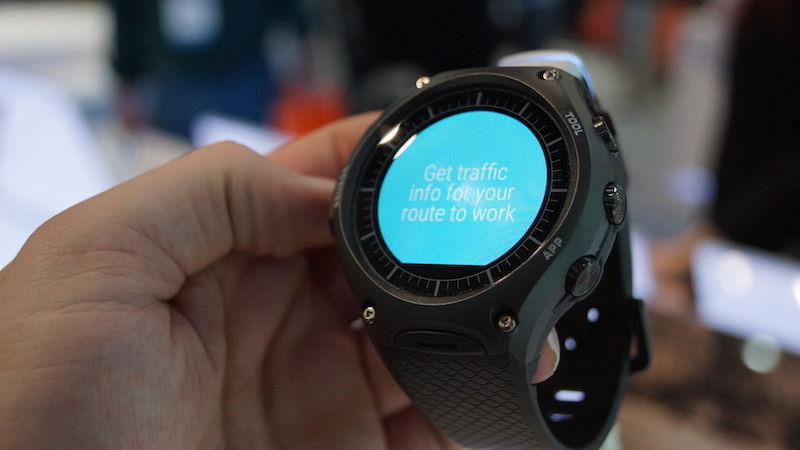 It’ll track your progress (although it doesn’t feature a heart rate sensor) and provide you with activity-specific information – for example, when fishing you’ll be able to see the atmospheric pressure, 10 minute atmospheric pressure changes as well as the time and elapsed time, whereas when cycling you’ll see travel speed, current time, as well as the distance you’ve travelled. This is thanks to the inclusion of a pressure sensor, accelerometer, gyrometer and magnetic sensor.

Interestingly, during our hands-on we saw an app that boasted the ability to use GPS on the watch when not connected to your smartphone. While this would be very good for outdoors use, there’s no confirmation of built-in GPS, so take that feature with a pinch of salt for now.

As well as this, the Casio WSD-F10 will also notify you at specific times such as sunrise/sunset times, and other fleeting occurrences. Notifications settings are set up beforehand, so there’s no need to select your notifications on a per-use basis.

With such a variety of features for varying activities, we found the smartwatch a little confusing to operate, especially at first. Although with this being said, we had a limited time with the Smartwatch and we feel that after a short learning curve, it’d become rather intuitive, especially with dedicated buttons along the sides for tools and apps.

So, when will you be able to get your hands on the Casio WSD-F10 smartwatch? The company has confirmed that it’ll be available to buy in April 2016 but hasn’t yet confirmed which countries it’ll be available in. It’ll set consumers back $500 USD, which equates to around £340, but UK pricing hasn’t yet been announced, so make sure you check back regularly as we’ll be updating this when we have more information.