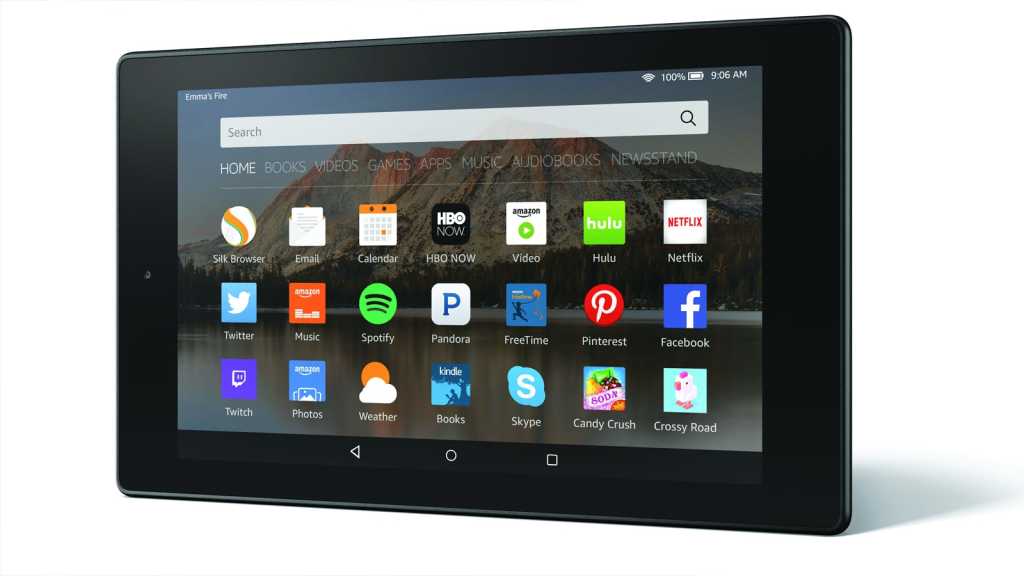 Unless you’re reading this review because you’ve spotted the HD 8 or HD 10 in a sale, they’re not great value at full price. They’re fine for casual users and once you’ve got to grips with the interface, they’re pleasant to use and have some useful features – especially for kids. Performance could be better, but it’s good enough for most people, as is the screen – despite the relatively low resolution. The lack of Google apps will put off some, as will the sheer amount of advertising throughout, but Amazon customers – particularly those who subscribe to Prime services will find it all quite useful. However, unless you really need a bigger screen, the 7in Fire is much better value at only £49

Launched in late 2015, the Fire HD 8 is from Amazon’s fifth-generation tablet range. It shares much with the other two models launched at the same time: the £49 Fire and the 10.1in HD 10, but is notable as it’s the first 8in tablet from the company. Previously, there was just one ‘large’ option: the HDX 8.9

We’re reviewing the HD 8 and HD 10 together here because they’re so similar, but our comments on performance, screen quality and battery life are based on the HD 8, which we received for the review from Amazon.

You can buy a Fire for £129.99 from Amazon. For some people, an 8in tablet for under £130 represents good value. An iPad mini 4, which also has an 8in screen, costs £319. There are reasons for the huge price difference, but if you’re just looking for an 8in tablet, the HD 8 is at the cheaper end of the scale.

However, it begins to look expensive when compared with its 7in sibling – the Amazon Fire, reviewed – that costs only £49.

UPDATE: As of 2 June 2016, the Fire HD 10 is also available in a rather attractive silver aluminium casing (just on the back) which gives it a premium feel at the same price of £169.99. View it here.

Cases start from £29.99, rising to £39.99 for the leather versions. Third party cases are also available cheaper, but we’d imagine most people will want to show off the bright back panel and not bother with a fitted case.

As long as you’re not expecting premium iPad-style build quality, you won’t be disappointed. Like certain other tablets, and the iPhone 5C, the HD 8 is unashamedly plastic. It’s available in glossy orange, magenta and blue finishes, or black if you prefer a more understated approach. 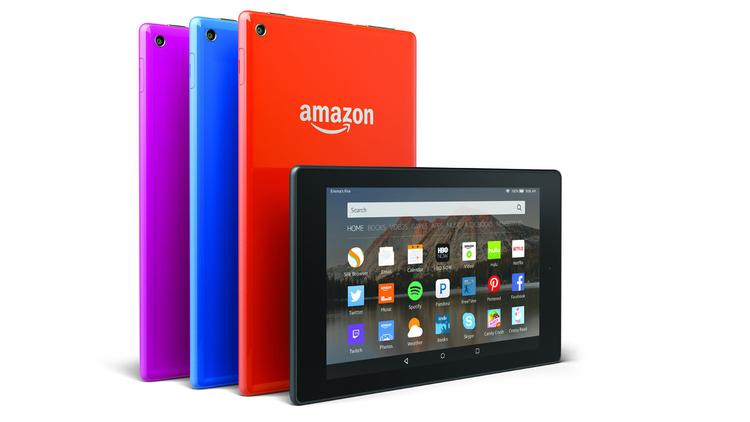 The HD 10 doesn’t have the outlandish colour options, with a choice of either black or white. 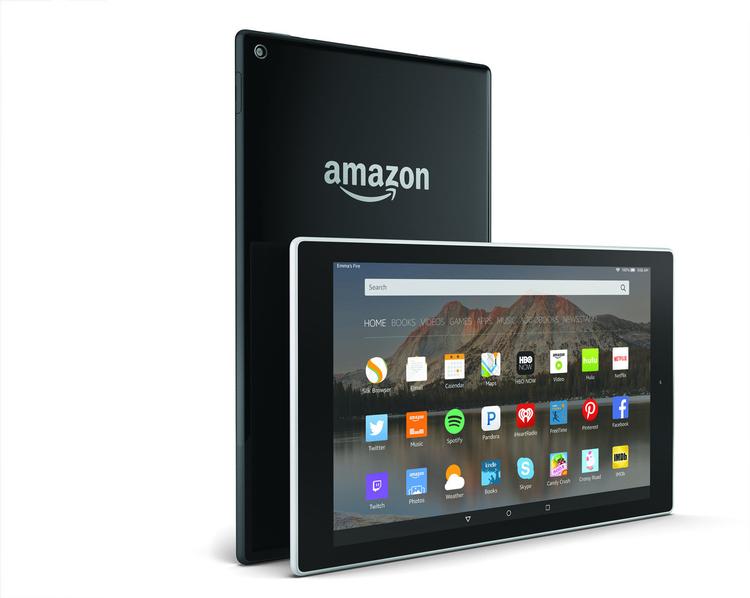 Under the HD 8’s plastic is a metal frame, and the result is a striking tablet that feels solid and sturdy despite its slim 7.7mm thickness and light weight of 311g. The HD is quite obviously heavier, but 432g is very light for a 10.1in tablet: the 9.7in iPad Air 2 weighs 437g.

Just like the 7in Fire, the HD 8 and HD 10 have all their ports and buttons on the top edge. Stereo speakers reside on the left-hand edge, or the bottom if you’re holding it sideways to watch a video or play a game.

Front and rear cameras are slightly better too, although they don’t justify the price hike from the 7in model. More on those later.

You also get a slightly faster quad-core processor, running at (up to) 1.5GHz instead of 1.3GHz.

Screen resolution is higher, too, but again it’s nothing to get excited about. The 1280×800-pixel screen gives an adequate 189ppi (common on tablets as far back as 2012), but we’ve seen better at this price – notably the no-longer-on-sale Tesco Hudl 2.

Image quality is good, though, with vibrant colours and good viewing angles. It’s laminated, too, so there’s a solid feel when you tap, and the image appears right at the surface as opposed to sunken some way below as you get with lesser, non-laminated screens.

Internal storage is limited to 8- or 16GB but there’s a microSD slot for adding more, up to 128GB. You can do that on the 7in Fire, too, but the HD 8 has upgraded Wi-Fi: dual-band 802.11ac. For most people, the difference will be negligible, not least because 802.11ac routers still aren’t too common.

Like the screen’s resolution, performance is best described as adequate. It’s better than the £49 Fire, but it’s not as good as a premium tablet. So pretty much what you’d expect, really.

You’ll see the occasional judder and delay when navigating around Amazon’s Fire OS 5 operating system, and you’ll sit there waiting for a few seconds while apps and games load. But once they do, it’s generally plain sailing.

The HD 10 has the same internals, so performance is the same since the screen resolution is identical. In fact, the low pixel count means game performance is better than it would have been if Amazon had opted for a Full HD screen: more pixels means fewer frames per second if you keep detail levels the same.

Battery life is a somewhat mixed bag. Amazon does good power management so that the battery doesn’t drain if you leave it in standby for a few days. Plus, if you’re just browsing the web or using other undemanding apps – reading a book, say – you’ll find the battery will last for longer than the eight hours Amazon claims. But stream videos from Prime Instant Video and you’ll see a shorter time between charges.

Games which use the tablet’s full processing power will obviously drain the battery the quickest, and if you stick the screen to full brightness (which isn’t blindingly bright) you’ll be lucky to get more than four continuous hours of use.

Recharging is a tiresome process, partly due to the low-power charger Amazon supplies. It takes several hours (we’ll update this review with an actual time when we remember to start the stopwatch next time it’s empty).

We’ve covered the hugely updated Fire OS 5 – codename Bellini – in our Fire review, so do read that if you want more detail.

Essentially, it’s a lot like Android Lollipop on which it’s based, but lacks any Google apps or services. You can use most via the web browser, but if you want the YouTube, Gmail or Maps app, you’re probably going to prefer to buy an Android tablet. And if you subscribe to Google Music, there’s no app available for an Amazon tablet.

If you’re an Amazon Prime member, or you subscribe only to the video or music services, the HD 8 has tight integration so you can access them. But while you’d expect that, you might get a little annoyed by how each of the ‘home’ screens tries to get you to buy content from Amazon. 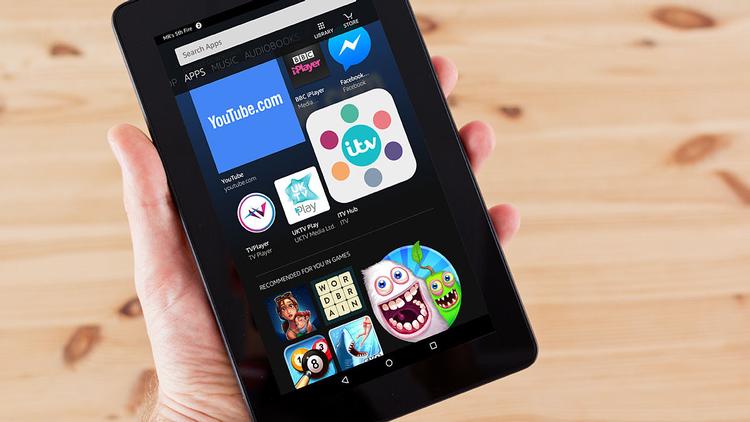 Sometimes it can be hard to see the stuff you own, so filled are the screens with recommendations from the various Amazon stores, be it apps, games, books, music or video.

Another issue we hope Amazon will address is the search bar. This tends to display a list of web search results instead of what you expect: either stuff on the tablet itself or content from the app store.

Flip to the Apps home screen and the search bar label changes to ‘Search Apps’. But type in ‘Skype’ and you end up looking at some Bing results (there’s no Google, remember) instead of being taken to the Appstore to download Skype. To do that, you have to tap on the shopping cart, labelled Store.

Thanks to the relatively new Amazon Underground – a part of the Appstore which contains only “truly free” apps – there are at least plenty of games and apps that won’t cost you a penny. Plus, the selection in the main store is better than a few years ago.

You can get BBC iPlayer, the new ITV Hub, All 4, Demand 5 and even the UKTV Play app which lets you catch up on shows from Dave, Yesterday, Really and Drama.

It’s possible to download shows from iPlayer and All4 to watch later, so as far as free UK catch-up TV goes, Amazon has it fully covered now.

Holes become evident if you have smart home products you want to control, although you’re in luck if you have a Hive thermostat or a Fitbit.

If you get stuck, the Mayday service means you can get support directly on the tablet, and if you have kids, there’s great parental controls when you use the Fire For Kids app.

A handy new feature – for late night use – is Blue Shade. This cuts out the blue light which LCD screens emit and which is said to prevent you falling asleep quickly. You can choose a colour from ‘red candlelight’ to ‘yellow moonlight’. It’s something we wish other devices had built in as standard.

The camera app has a simple, easy-to-use interface and advises when you need to enable HDR in situations where there’s high contrast. You’ll see this a lot, but switching on HDR means it takes a couple of seconds to capture and process multiple shots, so you need to keep the tablet still.

Unfortunately, no matter what you do, photos look pretty terrible. Saying they lack detail and sharpness is an understatement. Below is a full, original unedited photo from the HD 8 which appears to show heavy-handed compression which wipes out a lot of detail so that the brickwork of St Pancras is just a smudgy mess. (Click to enlarge.) 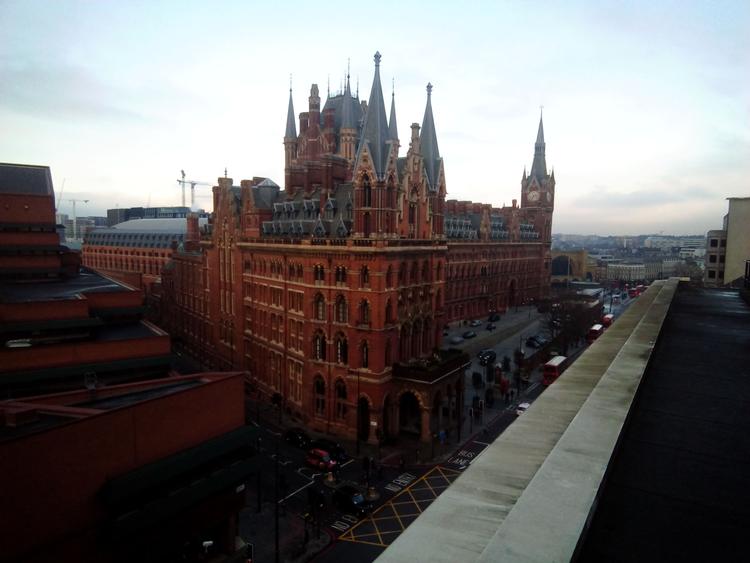 Here’s a 100 percent crop so you can see what we’re talking about: 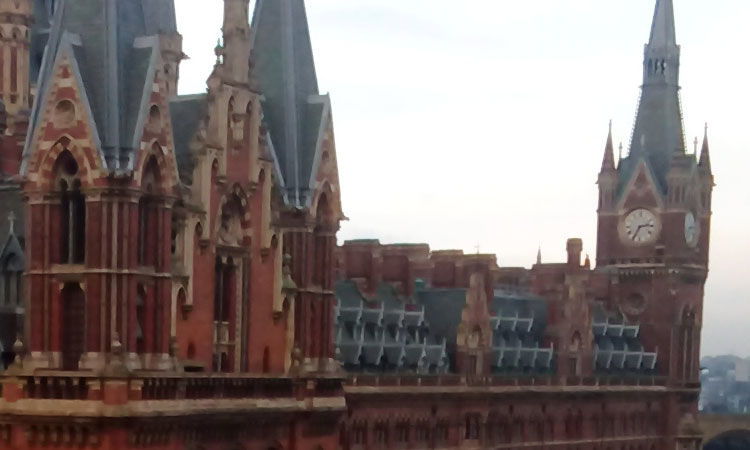 The HDR mode does improve the exposure – and creates a file roughly 50 percent larger – but the same flaws in image quality remain.

Video is shot at 720p by default, but another toggle switches to 1080p. There’s no stabilisation, which isn’t surprising, but quality is still below par. The same criticisms apply: a general lack of detail and sharp focus.

Making things worse is the lack of an HDR option. The severely limited dynamic range made our video (below) appear to have been taken at dusk, when it was in fact broad daylight, albeit winter daylight. Plus, exposure changes are slow and jarring. Overall, it’s a dismal failure of a camera.

The front camera has a 0.9Mp sensor and is fine for Skype but selfies are grainy and not all that flattering.