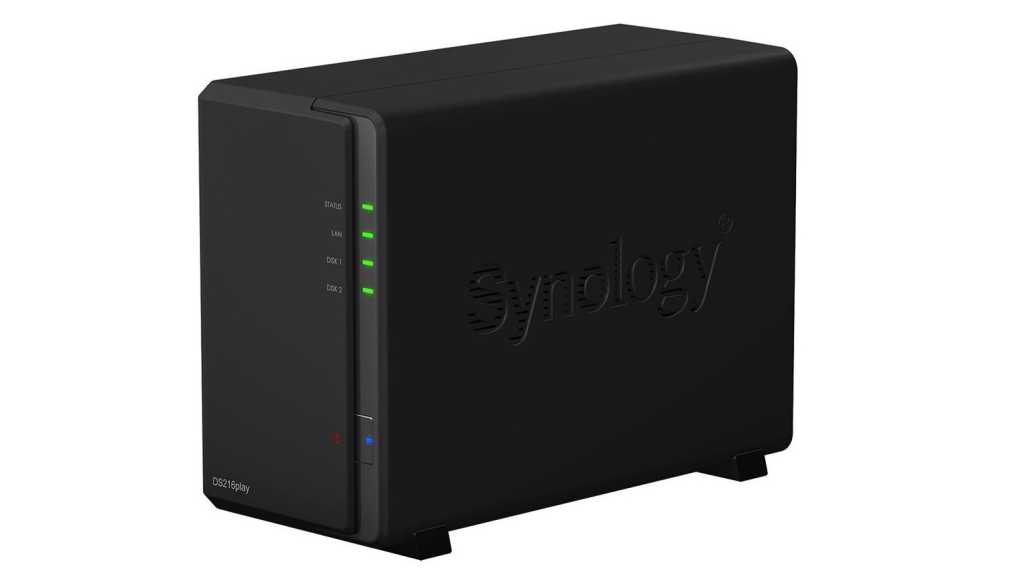 The 216play will likely be a disappointment to 214play owners wondering about an upgrade. It makes sense only if you have – or will soon have – lots of 4K content that you need to transcode on the fly. Its performance is good, but if you don’t need real-time transcoding, you may want to opt for a different DiskStation (or indeed another NAS entirely) which has the extra ports and SD slot which the 216play lacks.

The DS216play is a network storage device aimed at home users. Synology didn’t release a two-bay ‘play’ model last year, so this can be considered the successor to the DS214play, but some might think it’s an upgrade from the DS415play, reviewed.

The headline feature is 4K transcoding, but aside from this and lower power consumption there’s not much to tempt anyone to upgrade.

Cheaper than the 214play, you can buy the DS216play for £190 from Amazon. This is around £40 less than the two-year-old model, and as you’ll see below, there are reasons for this. We had expected it to be even cheaper, but most retailers are selling the NAS for more than Synology’s list price of £186: there are no discounts to be found yet.

Remember that this is just the enclosure price. Expect to pay around £400 if you want a pair of 3TB NAS-specific disks as well.

A NAS doesn’t have to be good looking, but given that the 216play is aimed at home entertainment geeks, it’s a shame Synology hasn’t made more of an effort with the design. The matt plastic is inoffensive, but it’s no object of desire. If anything the box feels flimsy and even cheap compared to other DiskStations.

There’s no removable front panel, no quick-release drive bays. There isn’t even a USB port or SD slot on the front, so there’s no easy copying of photo from your camera, or videos from a USB stick. 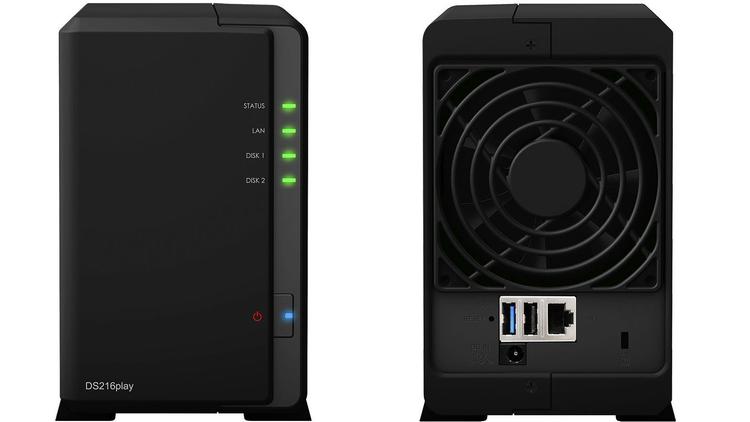 At the back is a pair of USBs, only one of which is USB 3. You won’t find E-SATA or anything else. Beyond that’s there’s the expected Gigabit Ethernet.

Unlike certain other entertainment-oriented NASs, there’s no HDMI output for direct connection to your TV, nor any audio outputs. Essentially, this is a box designed to be installed out of sight and used exclusively over the network.

Setup is a breeze, especially compared to older DiskStations. While we’ve moaned about the lack of slide-out disk trays, it takes only a couple of minutes to install each disk, then two small screws hold the slide-on side cover in place. You then connect the power supply and the network cable to your router. And let’s face it, you’re probably not going to open it up again unless one of your disks fail.

Once powered up, you head to find.synology.com from your laptop or PC. This automatically searches your network and once the DiskStation is found, you just click a button to install the latest version of DiskStation Manager.

Less than 10 minutes later you can start using it. The old manual downloading and installing process is automated and with the online discovery app, you don’t even have to install Synology Assistant, although you can still do that if you have problems.

The new QuickConnect service makes it easy to setup an ID and access your DiskStation remotely without the hassle of port forwarding and using a dynamic DNS service. Of course, transfer speeds will depend mainly on your broadband upload speed and your mobile network (or Wi-Fi).

We’re not going to cover DiskStation Manager in depth here, but for those unfamiliar this is the software which runs on all DiskStations. It’s more of a fully-fledged operating system these days and while some others (QNAP) come close, it’s widely regarded as the best. It’s also worth noting that DSM 6.0 isn’t far away and should bring new features for the 216play, such as offline transcoding.

There are plenty of features baked in, and plenty of native and third-party apps to download either through the on-board app store (Package Center) or directly from the app makers.

Synology’s own apps don’t all have wonderful, slick interfaces but they get the job done. There are mobile apps as well. DS File lets you browse your folders and access compatible content such as photos and videos, but there’s separate DS photo, DS audio and DS video apps for each media type as well. There’s also DS cloud as you can use your DiskStation as a personal cloud storage server, an email client, DS cam for monitoring feeds from connected IP cameras, and the new DS note app which is a bit like Evernote and even offers an Apple Watch app (DS audio does too). DS download allows you to search for torrent files online and download them straight to the NAS.

All apps are available for Android and iOS.

When you log into your DiskStation you get a full windowed OS in your browser. It can be a little confusing at first, but a tutorial helps you along the way. As with any NAS you can setup user accounts with passwords, read-only and storage limitations.

You can also manage your storage volumes, choose between different RAID modes, create a backup schedule and much, much more.

For the DS216play, it’s the video features which are of most interest of course. There’s support for Apple TV (AirPlay), DLNA TVs, Chromecast and Roku and via the DS video app you can stream videos stored on the DiskStation straight to those devices. Your phone – or tablet – can then be used as a remote control for not just choosing what to watch but controlling playback.

Assuming the information is there, you can use the app to filter your video collection by year, actor, director or other data. The app will also show if you’ve already watched a video, which is handy.

If you’d rather download the videos to your phone and watch them offline, that’s also possible. DS video can also double up as PVR if you connect a compatible TV tuner to a USB port on the back and function much like the DVBlogic TV Butler, reviewed.

None of these features are exclusive to the 216play, though – you can do this on pretty much any DiskStation. What’s unique is support for 4K transcoding. That means 4K movies can be transcoded in real-time to 1080p or lower to be watched on your TV or mobile device. Whether you want to do that because of limited network bandwidth or the capabilities or performance of your device (media player or phone / tablet), it matters not: the DS216play can do it.

Its capabilities are somewhat limited though. First, you need to go into DSM and enable 4K transcoding as it’s not on by default. It requires dedicating an extra bank of RAM, which is why it’s turned off.

Alternatively up to three streams of 1080p30 can be transcoded to 720p30 simultaneously. There’s no support for transcoding via DLNA. More in-depth details can be found on Synology’s website https://www.synology.com/en-global/knowledgebase/faq/659

This means you can stream 4K content from the DS216play at full resolution to your set-top box or UHD TV.

There are issues, though. First is that the chip responsible for the transcoding is very different from previous DiskStations. It’s an ST Microelectronics STiH412, a 32-bit dual-core 1.5GHz CPU. In older models, such as the DS214play, Synology used the QuickSync capabilities of the Intel Atom CE5335.

The problem is that the architecture change means some third-party apps won’t work, such as Plex. As of now, there’s no news about when (or indeed if) Plex support will be added, so don’t buy a DS216play in the hope that it will.

We tried streaming a 4K H.265 video to our 1080p Panasonic TV. The video played back smoothly but we found that CPU usage hovered around 80-85 percent. That’s hardly surprising, but it does mean you’re not going to want to have other tasks running in the background, otherwise you could well end up with choppy playback.

File copy performance was tested with two 3TB Seagate disks in a RAID 1 – the most common setup for home users as files are mirrored between the two disks and offers security for your files should one disk fail.

Synology claims a read speed of 108MB/sec for large files with a similar setup and we saw roughly 100MB/sec. For write speed, we were looking to match Synology’s figure of 91.5MB/sec, and almost did at just over 88MB/sec.

When you copy a load of small files, performance drops considerably, as you’d expect. In line with Synology’s figures, copying a 20GB basket of photos from 1-3MB, we saw a read speed of 51MB/sec and a write speed of 26MB/sec.

Your mileage will vary, depending on the disks you use, your home network equipment and your PC or other device you use to read or write files. Suffice to say that the 216play isn’t a bad performer considering the price, and you shouldn’t expect the faster speeds you’d get from DS216, especially if you’re dealing with encrypted files. That’s unlikely in a home setting, which is why only the models designed for business use have hardware encryption engines.