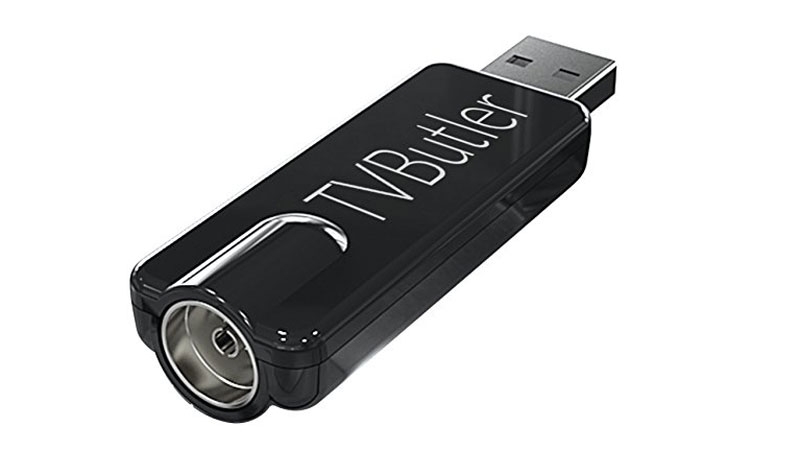 The idea is good, but the execution is flawed. Installation is painful and the user experience is far from slick. We’d like to see a multiple-tuner option and an integrated video player with an interface closer to Netflix or Amazon Prime. As it stands, the TVButler is only for techies who want to be able to watch recorded TV on their mobile devices. But if you’re an EE customer, the EE TV box is a far better solution.

This USB TV tuner lets you record shows and films to your NAS and then watch them whenever you like, wherever you like. Here’s our DVBlogic TV Butler review.

Even if you already have a Freeview set-top box, the TV Butler should appeal. Once connected to a USB port on your NAS drive it will let you record shows and then watch them on your TV, phone, tablet or computer. You can also download the videos to your phone and watch them offline, or stream them remotely over your broadband connection.

The theory sounds good, but in practice, the TV Butler is a device that only hard-core techies will be able to set up and use. We reviewed the DVBLink software last year and came to the same conclusion: once it’s installed and working it’s an attractive piece of software but it’s too messy for consumers to set up.

A year on, not a great deal has changed, apart from support for Mac OS X. A new package bundles a USB TV tuner with a licence for the DVBLink TVSource server, the software which runs on your NAS. You can run the server on a PC or Mac (or even a Raspberry Pi) but it’s primarily designed to run on a NAS which will be left on 24/7, always ready to record and serve videos.

The DVBLink client apps are free and available for iOS and Android, as well as Windows and Mac.

In terms of the hardware, it’s a single tuner, although a dual-tuner model is apparently in the works. You can connect two single tuners to two USB ports, if your NAS supports it. The main package costs 99 Euros (approx £72) from DVBlogic, and you can buy extra tuners for 59 Euros, approx £43.

Our experience installing the server software was, at best, unpleasant. We tested on a Synology DS212, but there’s wide-ranging support for other models and other manufacturers including QNAP, Asustor, WD and Netgear. We initially forgot the instruction from DVBLogic not to install the version available through the Synology Package Manger and so found that the outdated software couldn’t detect the TVButler tuner.

With this removed and the up-to-date server downloaded and manually installed we could open the server’s web interface and use the DVBLink package centre to download and install the necessary TVSource software. This has to be activated using the code printed on the tuner itself.

It’s worth noting that the DVBLink server can’t be updated automatically if it isn’t installed through the Synology Package Manager. When there’s a new version, it has to be downloaded from DVBLogic’s website and installed manually on the NAS.

We’re told that the programme guide should automatically populate after 10-20 minutes, but after an hour of the guide showing ‘No programme information available’ we dived into the server settings to find that no EPG source was set. Some considerable research was needed online to figure out which source URL was needed. Alternatively you can pay for a TVAdviser subscription which gives you enhanced programme information as well as recommendations for programmes you might like based on what you record.

When we’d eventually got the server working, we installed the DVBLink app on an iPhone and iPad. Via the app you can see the EPG, recorded shows and a list of scheduled recordings. Annoyingly you can’t play a recording in the app. Instead you get a message to install 8player lite.

This saw the DVBLink server without any extra configuration, but the interface is ugly and has adverts. Instead, you can browse recorded TV via the DVBLink app and it will ask to open 8player when you tap the play button on a show. There’s room for improvement in DVBLogic’s app, though, as the view defaults to showing programmes by series, which doesn’t show any shows recorded manually. To see those you have to switch to the ‘By Date’ or ‘By name’ view.

Through the 8player lite app you get all the usual playback controls and you can enable or disable subtitles.

There’s no facility to download recordings to your phone or tablet. That may come in a later update to the app. For now, if you want to watch offline you have to copy the raw file manually to your device and use an app that can play .TS files.

The alternative is to use the power of your NAS and the DVBLink server to transcode the recording and stream it over the internet. Quality is adjusted according to the available bandwidth, so a slow connection, whether due to your broadband’s upload speed or your mobile provider’s network, will mean reduced quality video and audio.

For Synology owners, Video Station – an app downloadable via the NAS’s Package Manager – has virtually all the functionality of DVBlink and TVSource, yet it infinitely easier to set up and configure. It also has a nicer interface, integrated playback and the ability to download files (similarly without transcoding) to your iPhone or Android phone. All you need is a supported USB TV tuner which will cost you £40-60.