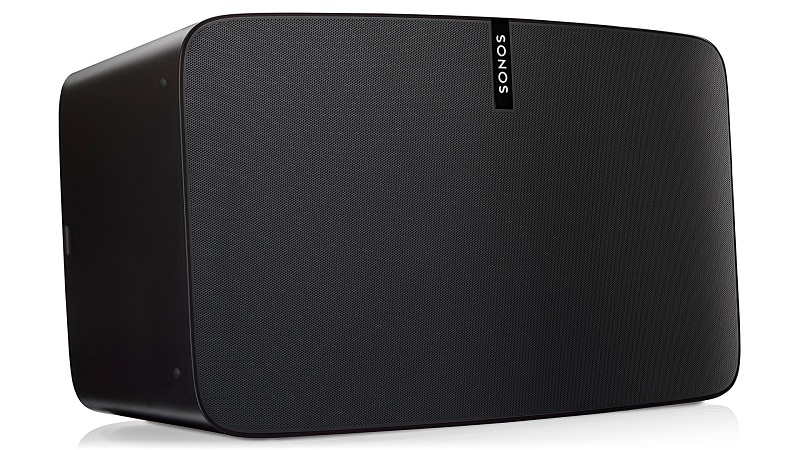 Aside from the lack of High-Res support, there’s very little to dislike about the new Play:5. It looks great and sounds awesome with plenty of power on offer. We like the new touch sensitive controls, the wide range of streaming services on offer and a decent app which now has Trueplay. It’s another set of high marks.

Sonos launched its Play:5 wireless speaker back in 2009 but there’s a new model here to replace it. Here’s our Sonos Play:5 review for the 2015 model which is one of the best wireless speakers you can buy.

The new Play:5 is available for £429 and you can choose which colour you want as usual. That’s a lot for a wireless speaker but it’s also not crazy and you can easily spend more. For that price, Sonos includes free delivery, a 100-day return policy and unlimited support.

If the cost seems like a lot, you might feel better to learn than the equivalent speaker from Bose – the SoundTouch 30 Series III – is £499. There are cheaper options out there though, with LG’s Music Flow H7 available for £241 at John Lewis.

The Play:5 is the biggest in the Sonos range of speakers and now has a shape closer to that of the Play:3, its smaller brother.

This new generation of Sonos speaker has a smooth look (and touch) and we love the gorgeous flowing lines which make up the rounded shape, similar in style to the Play:1. It feels fresh and modern, making previous speakers look somewhat dated.

There’s an outstanding difference when you compare the new generation Play:5 with the original, which was called the S5 to start with. It looks like a huge ugly lump now the 2015 model is here.

As usual, the speaker is available in black or white but the grille remains black whichever you choose. The design is well thought out and has an Apple-like feel where even small details are carefully considered. For example, the symmetry on the back where there are buttons and one of the most stylish Ethernet ports we’ve ever seen.

Apart from its new look, the Play:5 for 2015 has a key design change. Sonos has canned the physical pushed buttons used on previous speakers in favour for touch sensitive ones. In the middle is play/pause which is straddled by volume controls and there’s still an LED status light. The switch also means you can swipe to change track.

A button on the back of the Play:5 makes setup very quick and painless adding it to an existing system. Setting up a new system is also pretty easy and these days it’s no longer a requirement to use the Sonos Bridge. If you’re not using the Ethernet port as a way of connecting the Play:5 to your network, it can be used as an output to other devices which is a handy party trick.

Once you’re setup and ready to roll, there’s a huge wealth of content available at the tip of your fingers when it comes to streaming. Using the app, available for iOS and Android, you can play music locally stored on the device but that’s the tip of the iceberg.

You can stream content from up to 16 PCs, Macs or NAS drives which you happen to own (there’s still a desktop application). The Play:5 also has a potentially useful 3.5mm audio jack on the back if you want to connect a device to it – perhaps something like a traditional record player which would normally not be able to listen to through a wireless speaker.

All of this is before we’ve even touched on streaming content from the internet. Sonos has a pretty comprehensive range of support and is always looking to add it which is something we love. You can stream music from (not exhaustive) Spotify, Deezer, Amazon, Google Play, TuneIn Radio, SoundCloud and Tidal.

Apple Music is the most recent addition and will, like many other, require a paid-for premium style subscription.

In some cases, namely Google Play, you can stream music to your Sonos speaker(s) straight from the Play Music app itself without even needing to fire up the Sonos app.

Although this is really impressive, Sonos is not the choice for any audiophiles out there. The firm may not be targeting that market but we still want to point out that the system doesn’t support High-Res audio – it’s still capped at 16-bit/44.1kHz.

It’s one of the only downsides and while Deezer Elite claims to offer High-Res on Sonos, don’t be fooled. Its definition is ‘the same or higher sampling frequency and bit depth of a physical CD, which is 16-bit/44.1kHz’ which is not High-Res if you ask us.

If you wish, you can buy two Play:5 speakers and use them as a stereo pair, horizontally or vertically. We’ve only got one but this is likely to be a little excessive for most users, not to mention expensive. We’d recommend doing this with the Play:1 or even Play:3 if you’re thinking of going down this route. You can normally get two Play:1 speakers as a bundle for this purpose.

You can also use the Play:5, if you have two, as rear speakers in conjunction with the Playbar, but the Play:1 is far better suited to this job.

Really, the main unique selling point of the Sonos system is the multi-room capabilities. Although you can use a Play:5 or another speaker as a lone speaker, place one or more in other rooms and things come to life. You can play different music from different sources in different rooms or group as many as you like together for a party type mode. It works flawlessly and as such Sonos is still the benchmark to which rivals are compared.

Moving on to what’s underneath the smooth curves of the new Play:5 and there are six drivers in total, each with its own dedicated Class-D amplifier. The array consists of three mid-woofers and three tweeters. The 10am woofers sit along the bottom while a 23mm tweeter is straddled by two 20mm versions which are directed slightly sideways.

It’s similar to the Playbar and the results are typical for Sonos speaker – seriously impressive.

Like the smaller Sonos speakers, it’s the power on offer here which is one of the most astounding things. The Play:5 is big but it can fill a space much bigger than you might even thing and it does this without sounding like a single speaker.

Bass is really standout and sounds both warm and rich no matter what you put through the Play:5. The original was good in this area but Sonos has stepped things up to a new level here. You can pair the speaker with the Sonos Sub but as we found with the Playbar, there’s really no need.

Some may find the bass a little too much but Sonos provided EQ setting so users can easily tweak the sound of the Play:5 to their own liking or the acoustics of the room. If this is a bit too technical, Sonos has created a solution to help you out called Trueplay.

This is currently only available for iPhone and iPad and is built into the app. In a nutshell it uses the microphones on your device to measure the response of the Play:5 and adjust things accordingly. The difference it makes will vary hugely on the placement of the speaker and the acoustics of the space it sits in but is well worth trying to see if you hear an improvement – you can simply toggle it on and off so you’ve got nothing to lose.

Although we’re impressed with the low-end performance of the Play:5, Sonos hasn’t forgotten about the rest. The top-range is bright but it’s the mid-range where we noticed the biggest improvement. It’s refined and clear which mainly ensures vocals don’t get lost in the mix.